Skip navigation!
Story from Celebrity Style
Photo: Chip Somodevilla/Getty Images.
Reigning queen of the ‘90s style comeback Olivia Rodrigo has championed many trends from the decade — including slip dresses, combat boots, and opera gloves — since she rocked the world with her debut album Sour this spring.
Now, Rodrigo is bringing back another ‘90s staple: the chain belt. Last week, the singer wore a spring 1995 Chanel suit and chain belt to the White House, paired with white Giuseppe Zanotti platform sandals and black socks.
Like much of Gen Z, the singer is a fan of secondhand and thrift stores, including Depop and her favorite vintage shop Vantage in Utah. But her latest outfit is no ordinary find. The archival piece was featured in Chanel’s spring 1995 collection by Karl Lagerfeld. With the help of stylists Chloe & Chenelle Delgadillo, she opted to pair the suit with a thin silver chain belt that spelled Chanel on the front.
Advertisement
With Rodrigo’s help, chain belts are now trending. Online fashion search engine Lyst has seen a 121% week-over-week surge in shoppers looking for similar pieces, while back in April searches for “layered,” “hip” and “waist” chain belts were rising at a more modest 20% week-over-week.
The trend is making its return with a twist. While back in the ‘90s and early ‘00s chain belts were worn as a single accessory adorning one’s hip area, this time around the most non-functional-belt-to-ever-exist is now sported high waisted and layered, as demonstrated by designers like Chanel, Saint Laurent, and Gucci in their spring and fall collections.
Although the ‘90s were the time chain belts as we know them emerged on the scene, they were also a defining staple of the Y2K era, which is making a comeback in the form of whale tails, low-rise jeans, and cut-outs. In their first rise to popularity, chain belts were championed by celebrities like Beyoncé, Britney Spears, and Lil’ Kim. Now, it’s Instagram-ready influencers and celebs like Bella Hadid and Kylie Jenner who are sporting the look.
If you feel like taking a trip down memory lane with a chain belt, here are some vintage-inspired options to choose from. 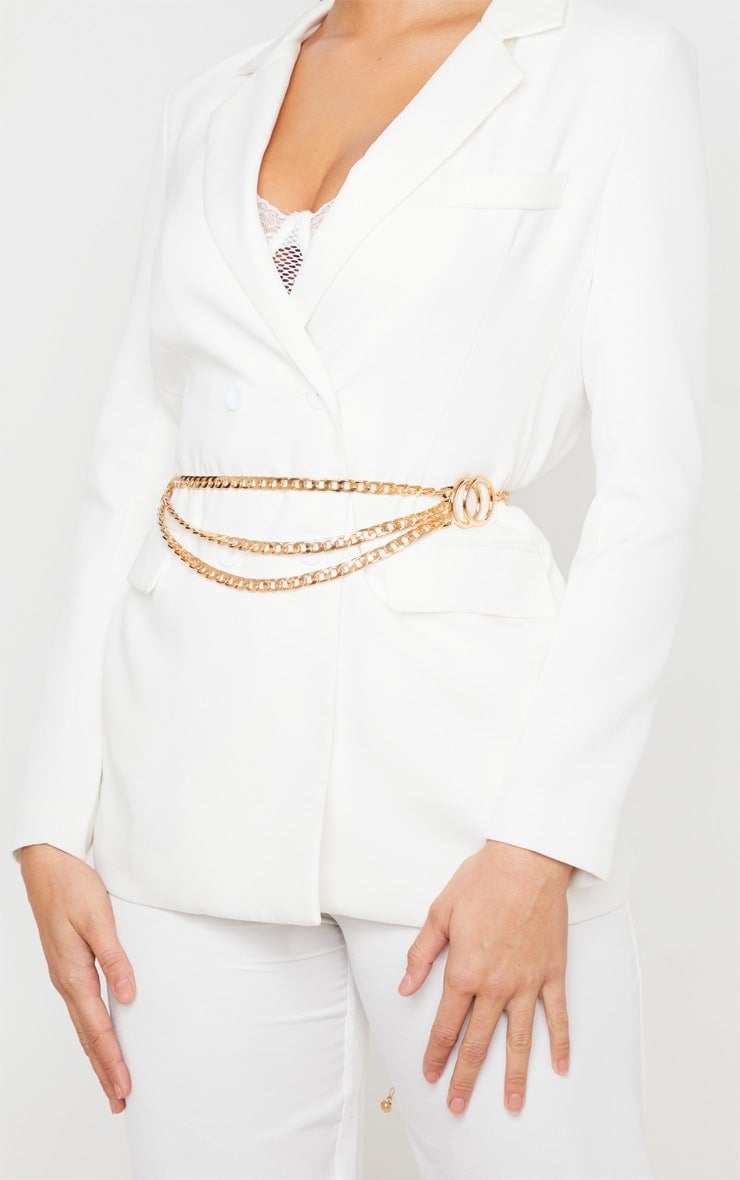 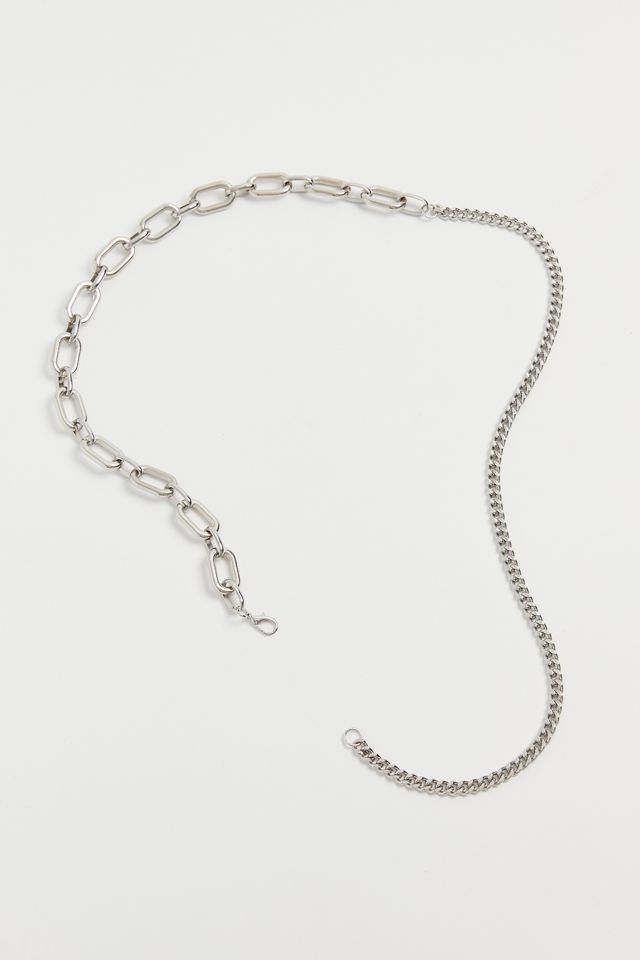 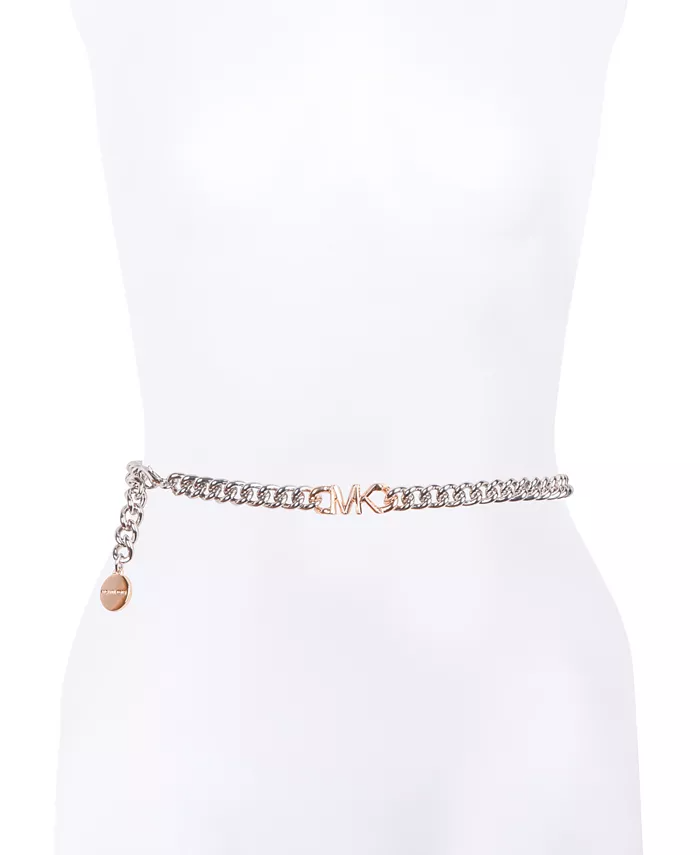 Michael Kors
Chain Link Belt
$58.00
Macy's
Celebrity Style
What The Most Viral Celebrity Looks Say About 2023’s Fashio...
This year, celebrity fashion returned to its pre-pandemic heights: concert tours resumed, fashion weeks around the world picked up, and red carpets renewed
by Frances Solá-Sant...
Entertainment
All The Best Red Carpet Looks From The 2023 Golden Globes
by Millie Roberts
Unbothered
Our Top 3 Looks From Rihanna’s Savage X Fenty Vol. 4 Show
The fourth installment of Savage X Fenty’s epic fashion show just premiered on Prime Video, and it’s nothing short of energetic and sexy. In this show,
by Venesa Coger
Advertisement
Unbothered
I’m Showing Plus-Sized Black Women They Can Feel Empowered ...
In a sea of social media sameness, it’s incredibly refreshing to scroll through content creator and model Simi Muhumuza’s Instagram and Tik Tok pages,
by Christa Eduafo
Unbothered
Let’s Ignore Kanye West & Put Some Respect On Gabriella Karefa-Jo...
Regardless of how much of a “creative genius” Kanye West believes himself to be, one thing is crystal clear: we really need to stop making excuses for
by Venesa Coger
Unbothered
Claire Sulmers On What’s Next For The Black Fashion Industry
Welcome to Fashionably Black!, a style and culture guide for Black people highlighting the cultural moments, pioneers, and conversations we’ve always bee
by Venesa Coger
Unbothered
What’s Next for Serena Williams? Fashion, Of Course
When Serena Williams announced her retirement (or as Williams prefers, her “evolution”) from tennis earlier this month, it signified the end of an epic
by Alexis Jackson
Unbothered
Savage X Fenty Debuts Loungewear Collection — With Help From G...
Last week, Savage X Fenty launched its newest loungewear collection, Xssentials, and the line is everything you’ll need this fall. From soft fabrics to b
by Venesa Coger
Fashion
Remi Bader’s New Revolve Launch Is Here — Why The TikTok St...
At one point or another, all shoppers experienced trying on clothing they purchased online only for it to fit nothing like they expected. TikTok star Remi
by Daisy Maldonado
Unbothered
WNBA Star Skylar Diggins-Smith’s Puma Collection Is Versatile On ...
Skylar Diggins-Smith wants you to know that she’s a hooper with style. On August 2, the six-time all-star and Phoenix Mercury Guard released her first-ev
by Venesa Coger
Unbothered
Want To Grow Your Following On Instagram? Micaéla Verrelien Share...
The misconception about being a successful influencer is that you have to tie yourself down to one specific niche in order to gain popularity. But thatR
by Venesa Coger
Fashion
Tinx Is In Her “Rich Mom Athleisure” Fashion Era — But Don’t Expe...
“Rich Moms love a monochrome moment, like a linen pant and a nice linen blouse. They love a bathing suit with a sarong over it and some amazing statement
by Irina Grechko
Advertisement
Advertisement
Discover
R29 Stories & News
Watch
R29 Original Series & Films
Shop
R29's Most Wanted