Skip navigation!
Story from Style
Photo: Chris Weeks/FilmMagic.
Over the last few seasons, Y2K fashion has made a comeback. From whale tails and trucker hats to micro mini skirts and bedazzled Bebe tops, every kitschy trend from the early aughts is making its way out of the archives and onto TikTok. But while some resurrected looks have received a warm welcome — who doesn’t love a baby tee? — others are setting off alarms and adamant nopes. Case in point: the return of the low-rise jean.
It started last year with models like Emily Ratajkowski and Bella Hadid, whose wardrobes have become time-travel machines to Y2K, be it via low-rise Von Dutch cargo pants or colorful candy rings. Then Game of Thrones actress Sophie Turner wore a pair of low-rise baggy jeans, which she paired with another '00s relic — a going-out top — for date night with Joe Jonas. Pretty soon, the silhouette was making the rounds on TikTok, where the tag #LowRiseJeans now has over 131.5 million views.Still, many hoped the murmurings of a low-rise jean reunion tour would not prove prophetic. According to Stephanie Valponi, a stylist at Stitch Fix, that isn’t the case, though. “We’ve heard rumors over the last few years that low-rise jeans would be making an inevitable comeback, but now, it’s safe to say these are rumors no more,” Valponi tells Refinery29.
Advertisement

And there’s data to prove it. In May, thredUP, an online consignment and thrift store, reported a 50% increase in search for low-rise jeans, compared to the time frame between January and March of 2021. “Love it or hate it, there’s no denying that more people are trying out low-rise denim again,” Kesha Linder, a merchandiser at the online retailer, tells Refinery29.
Even so, many women who can recall the last heyday of low-rise jeans — when zippers regularly measured under three inches and necessitated embracing a peek-a-boo G-string (thus the whale tail trend) or spending a majority of the time hiking jeans up — aren’t excited. “I was in college in the early ‘00s, and I think I still have PTSD from my low-rise Juicy Couture sweats and my two-inch-zipper Diesel and Chip & Pepper jeans,” Pauline Montupet, 39, the founder of San Francisco-based clothing shop Le Point, tells Refinery29. “There was a constant feeling of being too big for low-rise pants,” she explains, adding that her stomach was never flat enough or her hip bones prominent enough, in comparison to celebrities (Paris Hilton, Lindsay Lohan, Mischa Barton, etc.) who would frequently wear the trend on the red carpet and at parties. “Only very thin people didn’t have a muffin top while wearing super low-rise jeans, so I constantly felt that I was in a losing battle between my body and low-rise denim.”

There's an excerpt of Everybody (Else) in @InStyle! It's about low-rise jeans, what we teach girls about their bodies, and trying to find your gay self amidst Bush-era politics and a hyper-sexualized pop culture that doesn't really leave room you. https://t.co/xPAdkEoxjF

Former Refinery29 fashion director Gabrielle Korn wrote an entire chapter about the effect low-rise jeans had on her mental and physical health in her book of personal essays, Everybody (Else) Is Perfect. In it, she discusses her constant urge to cover up her love handles during high school in 2003, so much so that her belt loops were often ripped off from so much pant tugging.
Advertisement
Others, like Rachel Jones, 33, the founder of underwear brand Jonesy, are happy to give the once-shunned silhouette another whirl. Despite her initial shock at finding out that the denim style was having a resurgence — “my hips haven't seen the light of day since 2004,” she tells Refinery29 — Jones says she now sees the current version of low-rise jeans “fresh and exciting,” compared to the rotation of high-waisted pants she’s been wearing for a near-decade. Today’s low-rise jeans have evolved, and don’t feature ultra-tight fits, barely-there zippers, or thong-baring backsides like they once did. Instead, the trend is mostly made up of baggier jeans and trousers that naturally sit low on the waist — no tugging, sucking in, or awkward pretzeling of limbs required.

In fact, it was right after giving birth that Jones says she started eyeing denim with a lower rise. “My body was still changing, and I was drawn to a more undone look,” she says. “I didn't want pants or jeans to suck me in. I wanted something low and loose, and a pair of vintage low-rise jeans from Etsy scratched that itch for me.”
This renaissance of low-rise jeans has yet to be picked up by a bevy of brands, but a select few have become frontrunners, creating a more comfortable version of the denim we love to hate. Los Angeles-based brand Miaou, which was founded as a denim brand but has since become known for its patterned corsets, is currently carrying baggier cargos and ‘00s-inspired low-rise styles. Ragged Priest, which makes “regular jeans for irregular people,” according to its website, is also dabbling in the throwback silhouette, as is Miss Sixty, the favored denim brand of celebrities in the aughts that has been making a comeback recently.
Advertisement
Photo: Courtesy of Zoé Martin.
Zoé Martin wearing low-rise jeans.
As more and more brands catch on, a contingent of fans are celebrating: the small but passionate circle of people who never got rid of their low-rise jeans in the first place. “Low-rise jeans accentuate my hips and butt in a way that high-waisted jeans simply do not,” says New York-based style journalist Lee Phillips, 24. “For me, this is not really even a trend — low-rise jeans are literally the only jeans I'll wear.” Fashion designer Zoé Martin, 25, also sees the skimpy style as her end-all-be-all: “I am very much pro-low-rise jeans,” she says. According to Martin, whose fashion brand O’Dolly Dearest is dedicated to the ‘90s and early ‘00s, low-rise jeans are effortlessly sexy, especially when paired with aughts-era accessories like waist beads and thongs. She says that low-rise jeans have always been a staple in her wardrobe because of the way they fit her body.
Martin concedes that the low-rise jeans of the past had their problems and hopes that with this second wave of popularity, brands will rework the style to better fit a larger range of women. “I'm eager to see how retailers will make them more modern and flattering for different body types,” she says.
If you're thinking about taking the plunge, a few low-rise denim styles are hanging out below. 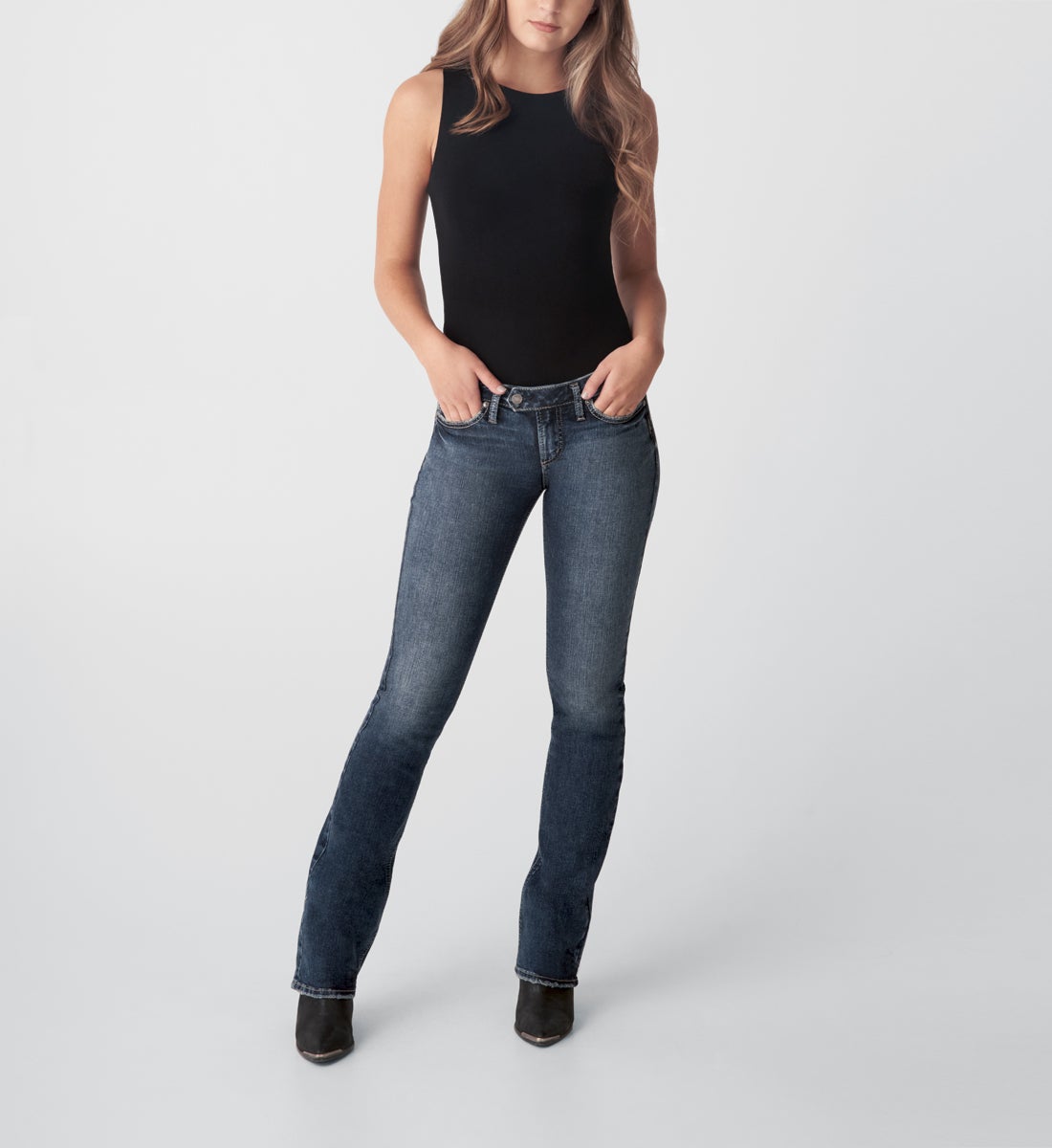 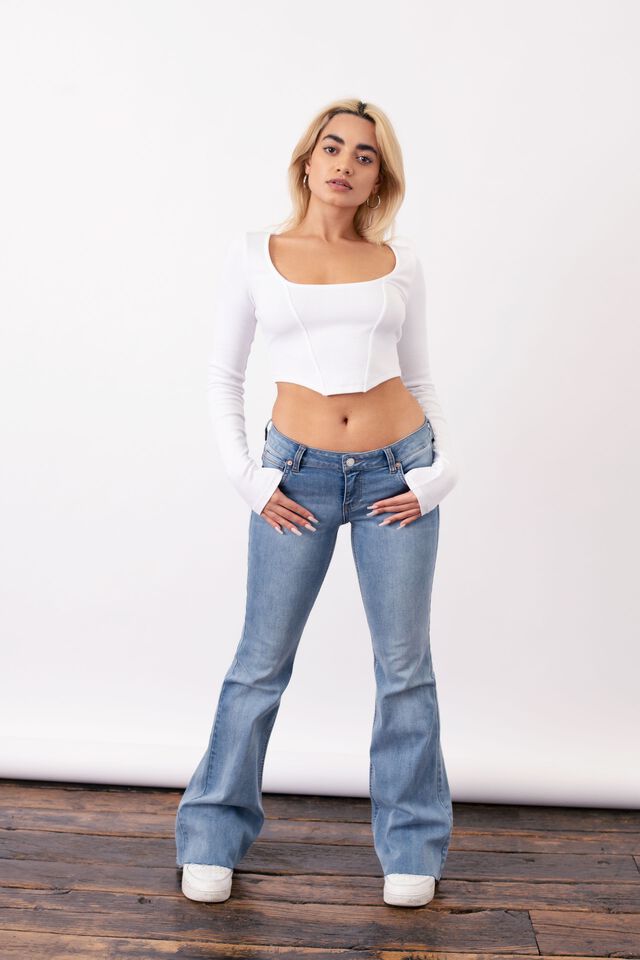 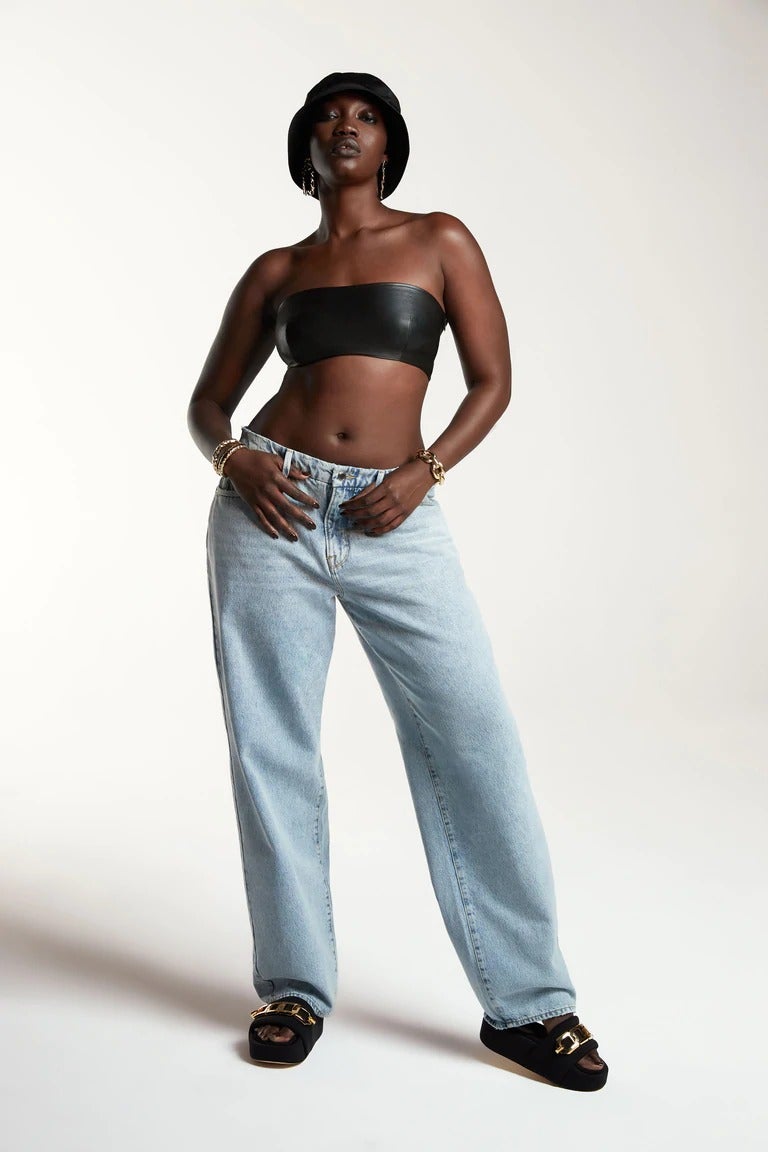 Good American
Good '90s Loose
$155.00
Good American
At Refinery29, we’re here to help you navigate this overwhelming world of stuff. All of our market picks are independently selected and curated by the editorial team. If you buy something we link to on our site, Refinery29 may earn commission.
Fashion
8 Jewelry Trends That Will Ensure You Shine Bright In 2023
If your outfits aren’t making you smile, it might be time to update your accessories collection. At least that’s what Shopbop fashion director
by Amanda Randone
Fashion
7 Copenhagen Fashion Week Fall 2023 Trends To Try Now
Perhaps no other city is simultaneously as inspirational as it’s pragmatic when it comes to fashion trends as Denmark’s capital. Sure, New York, London
by Kristen Bateman
Denim
These Top Jean Trends Are The Stuff Of Denim Dreams
Fashion icon Diana Vreeland once famously said: “Blue jeans are the most beautiful things since the gondola.” You certainly don’t need to
by Amanda Randone
Advertisement
Best Wedding Dresses
6 Bridal Fashion Trends That Will Be Everywhere In 2023
This year, wedding fashion will take a turn for the glamorous. As evidenced by the New York Bridal Fashion Week Fall 2023 lineup, casual slip dresses and m
by Frances Solá-Sant...
Fashion
7 Shoe Trends To Up Your Footwear Game In 2023
If your New Year’s resolution is to treat your wardrobe to a seasonally appropriate update, the best place to start is from the bottom. Solid style choic
by Amanda Randone
Fashion
6 Fashion Trends That Will Take Over 2023 — Shop Them Now
Four months after the new runway collections made a case for all we should expect in the new year, the 2023 fashion trends have started making their way in
by Irina Grechko
Engagement Rings
7 Engagement Ring Trends That Will Be Big In 2023, According to E...
Unlike popular runway styles, engagement ring trends tend to move on a slower, subtler track (there’s not a wedding ring equivalent of a butterfly top or
by Nicole Kliest
Fashion
7 Handbag Trends To Tote Around In 2023
While a new year doesn’t necessarily need to mean a new you, it could mean it’s time for a new handbag. This essential piece of your next arm p
by Amanda Randone
Coats
Scarf Jackets Are Winter’s Most Viral Coat Trend
HeatTech leggings, turtleneck, North Face jacket, scarf, beanie. That’s the winter essentials lineup I return to again and again when bundling up for the
by Aemilia Madden
Fashion
Mood Jewelry Is Back — & All Grown-Up
Some of my earliest memories of experimenting with personal style include acquiring a sizable collection of mood rings. Most were run-of-the-mill versions
by Shelby Ying Hyde
Fashion
5 Style Aesthetics That Will Take Over Fashion In 2023
The concept of fashion aesthetics is nothing new to the trend forecasting industry. Seasonal style stories that often pop off on social media platforms lik
by Kendall Becker
Fashion
How To Style Cowboy Boots For Winter — According To R29 Editors
Following the year-long reign of platform heels, there’s a new shoe trend that’s set to steal the spotlight this winter: cowboy boots. Having f
by Irina Grechko
Advertisement
Advertisement
Discover
R29 Stories & News
Watch
R29 Original Series & Films
Shop
R29's Most Wanted