There’s something bewitchingly nostalgic about butterflies. They evoke the sounds of Mariah Carey’s iconic 1997 album while simultaneously conjuring up images of Salma Hayek walking the red carpet adorned with the delicately avian creature. When Billy Porter channeled a super-charged version of Hayek’s aesthetic at the 2020 Critics Choice Awards, his ensemble was celebrated as an ode to the trans community. Butterflies tell the story of metamorphosis; a nod to former versions of ourselves and a sign of how we've grown. This, according to South Asian-American designer Sheena Sood, is exactly why we’ve been seeing it everywhere lately.
Advertisement
“

I was always told that if a butterfly comes near you or sits on you, it’s a sign of good luck and a blessing.

SHEENA SOOD, DESIGNER
”
“Perhaps we all come to love butterflies, a symbol of transformation, during adolescence, and then later the motif becomes a reminder of that uniquely beautiful and transformative time in our lives,” she says, remembering the flurry of faux butterflies she slept beneath as a child (she had wallpapered the border of her bedroom with them) and the giant one she sported with enthusiasm on her torso as a teen (her favorite shirt that was purchased, of course, at Delia's — the ultimate retail mecca of '90s style). “I was always told that if a butterfly comes near you or sits on you, it’s a sign of good luck and a blessing. So I associate them as being a breath of fresh energy, a good omen, a sign that I’m on the right track, and even a reminder of what’s important to me.”
Photo: Courtesy of Abacaxi. 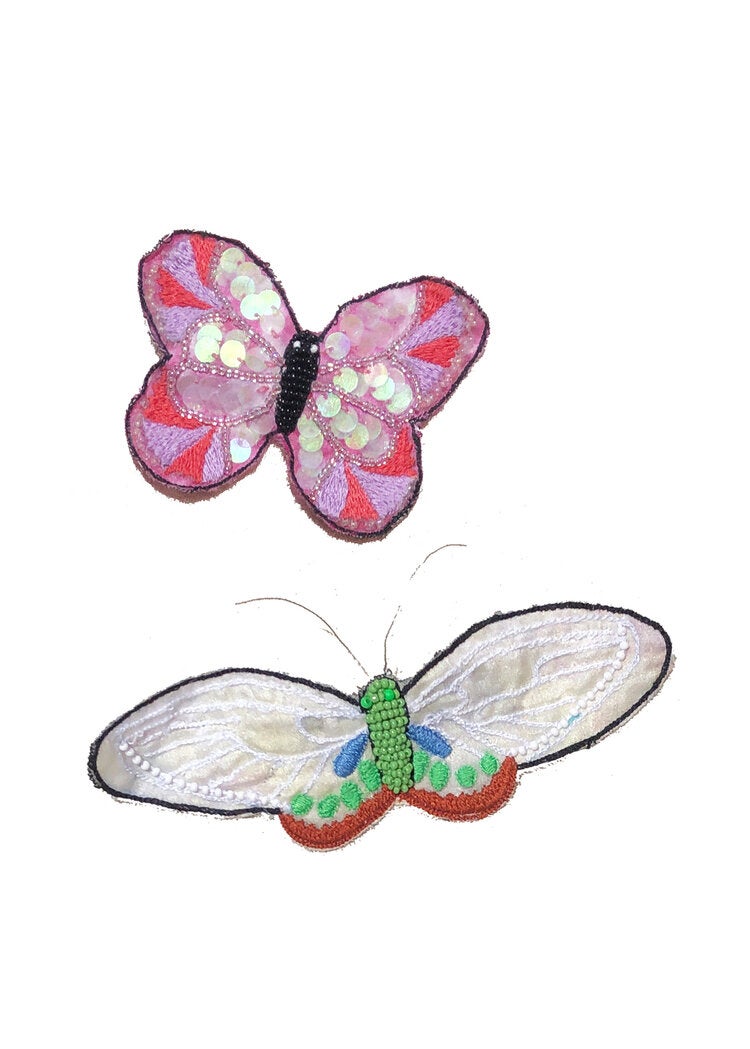 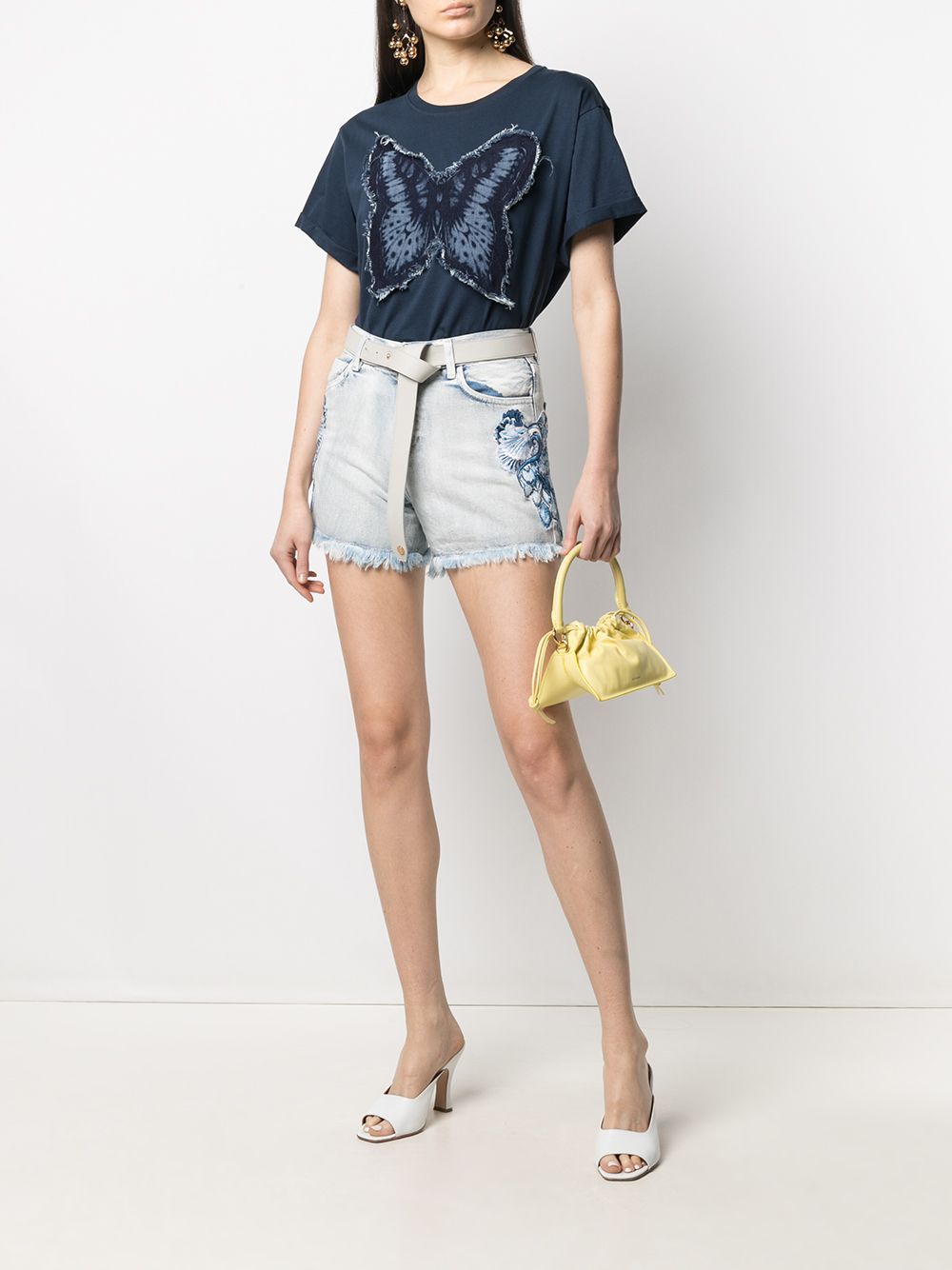 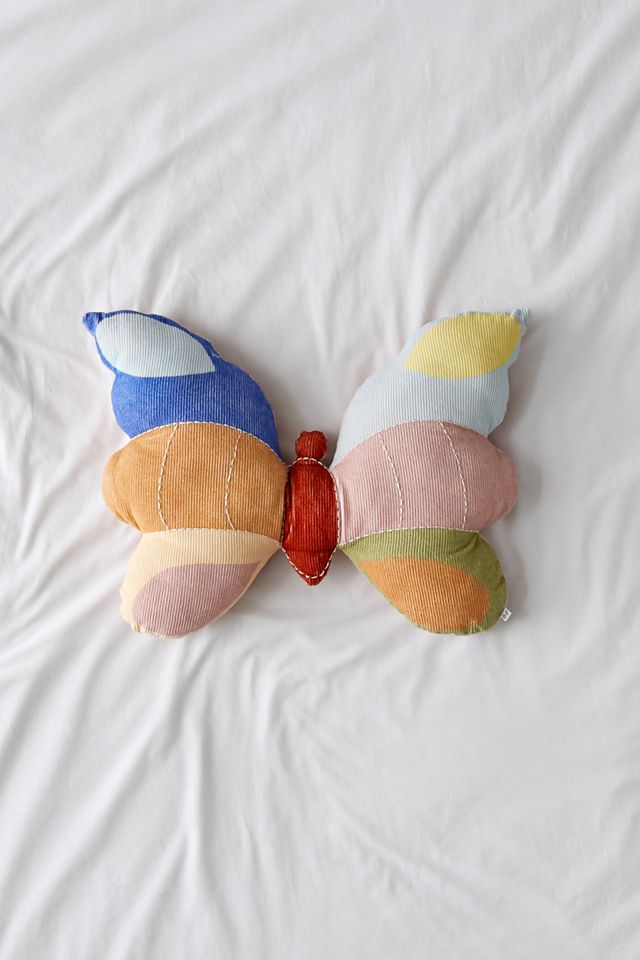 Urban Outfitters
Butterfly Corduroy Throw Pillow
$49.00
Urban Outffiters
That Delia's top had such a lasting impression on Sood that it eventually re-emerged, true to form, as an inspired design for her sustainable clothing label, Abacaxi. The brand itself is an exploration of nature’s infinite charm, both in terms of Sood’s approach to design and production. Each piece is a celebration of the skilled artisan or weaver who made it — ethically, and in small batches — in India. One long-sleeved shirt features sequins layered beneath silk organza, which comes together gloriously in the shape of a winged insect, not unlike her go-to teenage-style staple (we've all got one!). It’s part of a collection entitled “The Butterfly Effect,” which is best described as an artistic interpretation of science: “They say that when a butterfly in South America flaps its wings, through a series of millions of different connections, it affects the clouds hovering over China. In this way, the earth is one living organism, and the whole world is one.”
Advertisement
“

The motif becomes a reminder of that uniquely beautiful and transformative time in our lives. 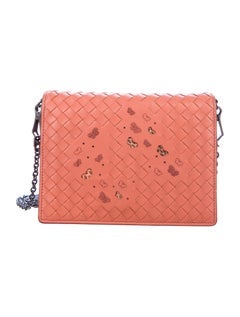 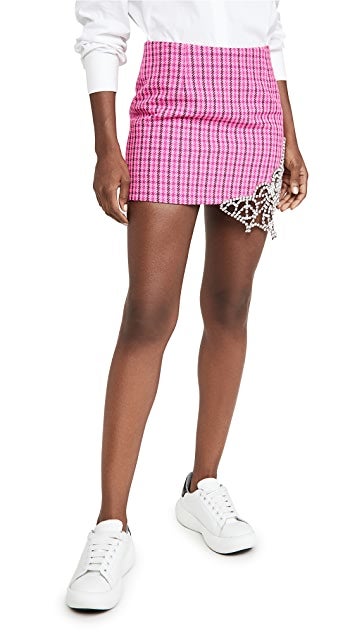 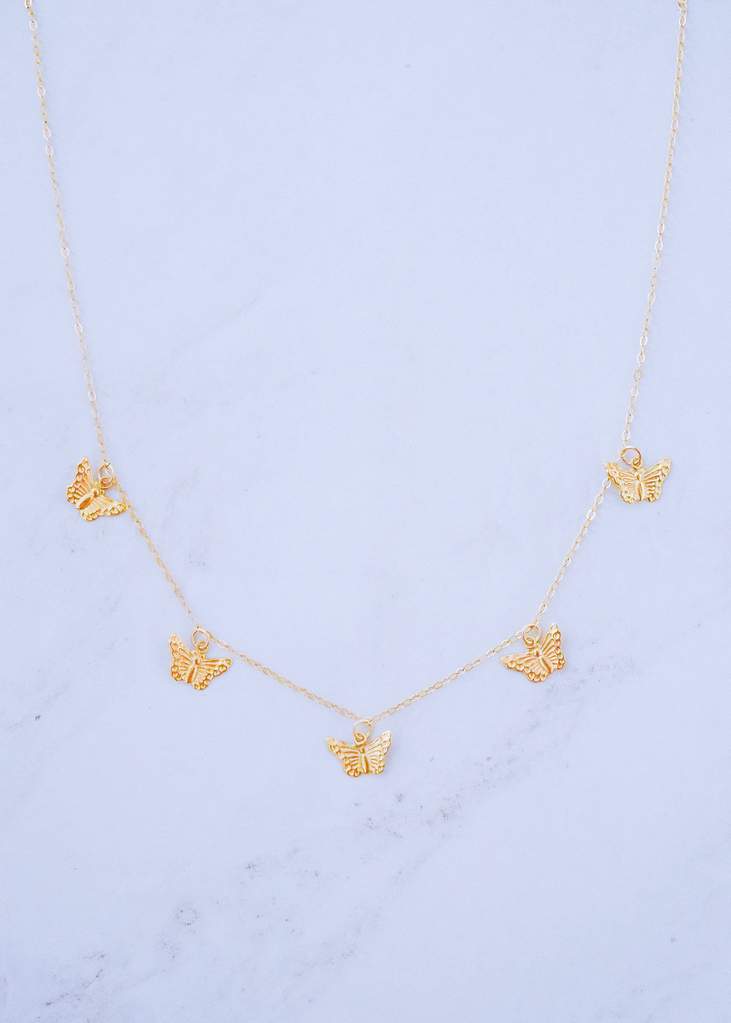 Ten Wilde
Butterfly Necklace
$52.00
Ten Wilde
In addition to the throwback top, Sood's designs include silky, beaded, bug-like barrettes and wide-leg chambray pants with butterfly eyelet embroideries. This imagery falls under the designer's general interest in naturally occurring patterns such as orchid petals, peacock feathers, and snakeskin which she presents through a kaleidoscopic array of tie-dyes and embroidered quilting. Her upcoming Fall 2021 collection, "Plants as People," dives even deeper into the interconnectedness between humans and plant and animal life in which butterflies will continue to play an important visual role.
“

I associate them as being a breath of fresh energy, a good omen, a sign that I’m on the right track. 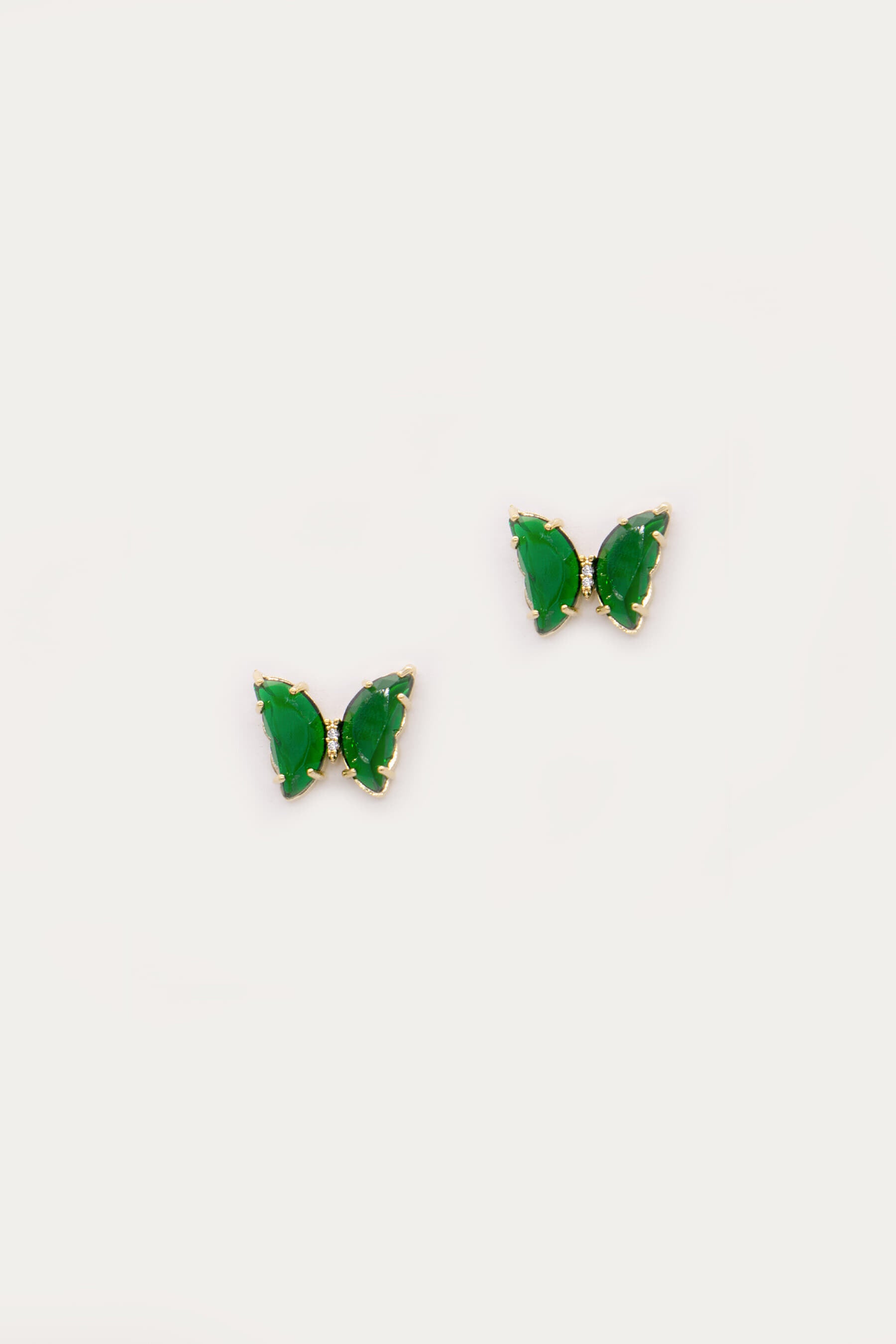 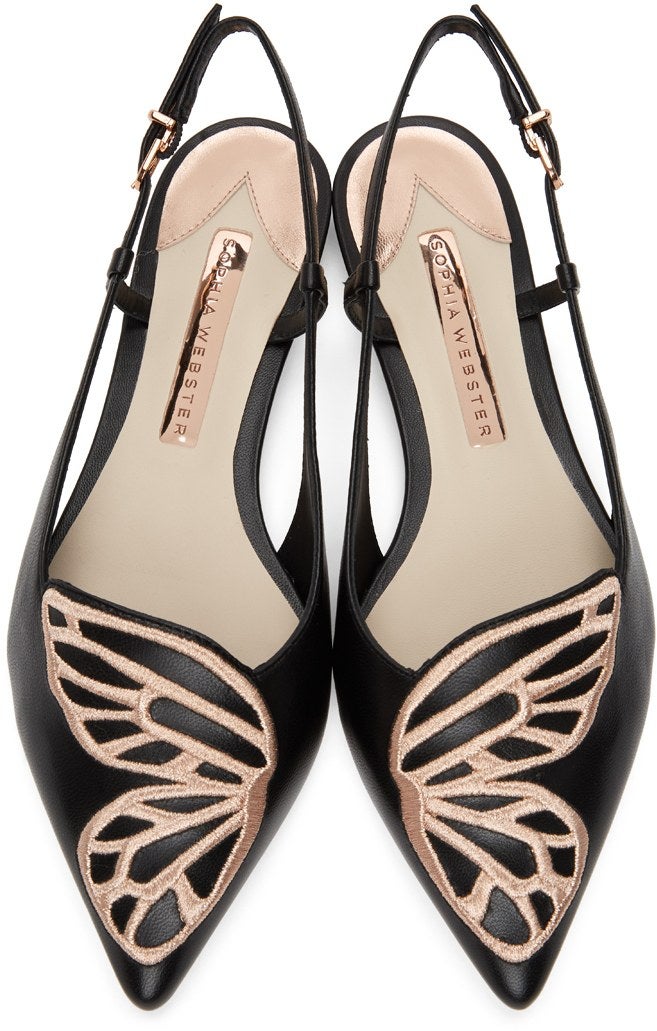 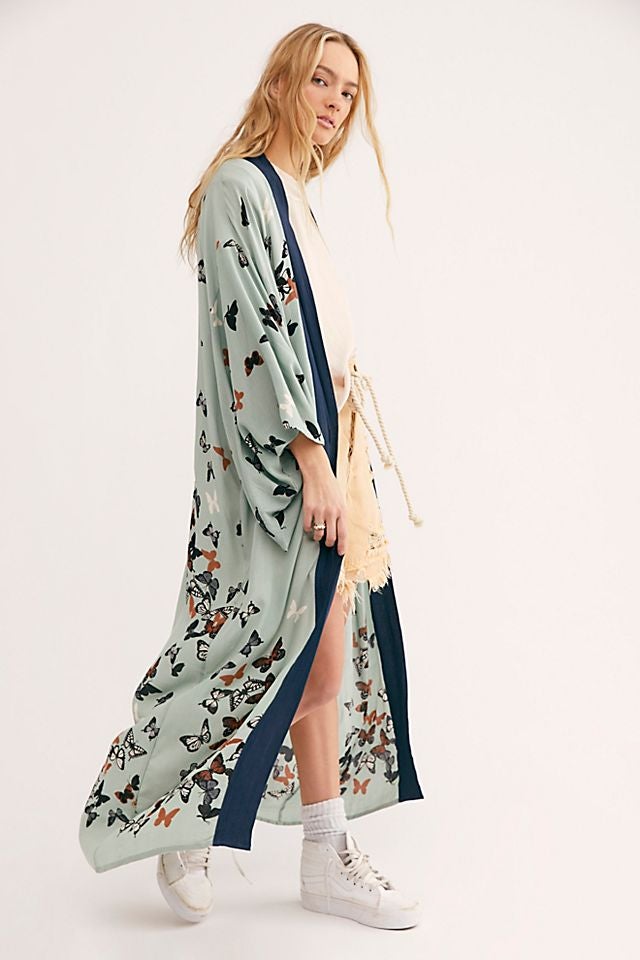 Free People
Butterfly Kisses Robe
$78.00
Free People
Sood is one of many artists drawn to the butterfly because of its multifaceted significance. Time and time again, we've seen the symbol flutter down the runways of Valentino, Zimmerman, Gucci, Alexander McQueen, and more by way of dramatic headdresses, statement handbags, and ethereal dresses. Instagram, the birthplace of big trends, has also seen the butterfly take off across its cyber feeds, with shots of Sofia Richie leaping around in Weekend Max Mara's Spring/Summer 2021 "Flutterflies" collection and a reel of the newly minted mom Gigi Hadid undergoing her own transformation into something of a butterfly-covered vision (liked by 4.5 million users and counting).

While to some this symbol speaks to the beauty of change, for others, Sood has discovered, it stands for something more. Within immigrant communities, she says, it represents the right to move around this world freely. In Sumba, Indonesia, where she was researching natural dyeing and traditional ikat weaving techniques, cloths featuring the butterfly were hung up in homes to welcome guests. "They also symbolize strength and fragility simultaneously," Sood adds. "They are predators, meanwhile they are harmed easily if their wings are touched or damaged. They're incredibly gorgeous, at the same time, can be dangerous in order to protect themselves."
Advertisement
“

They symbolize strength and fragility simultaneously. 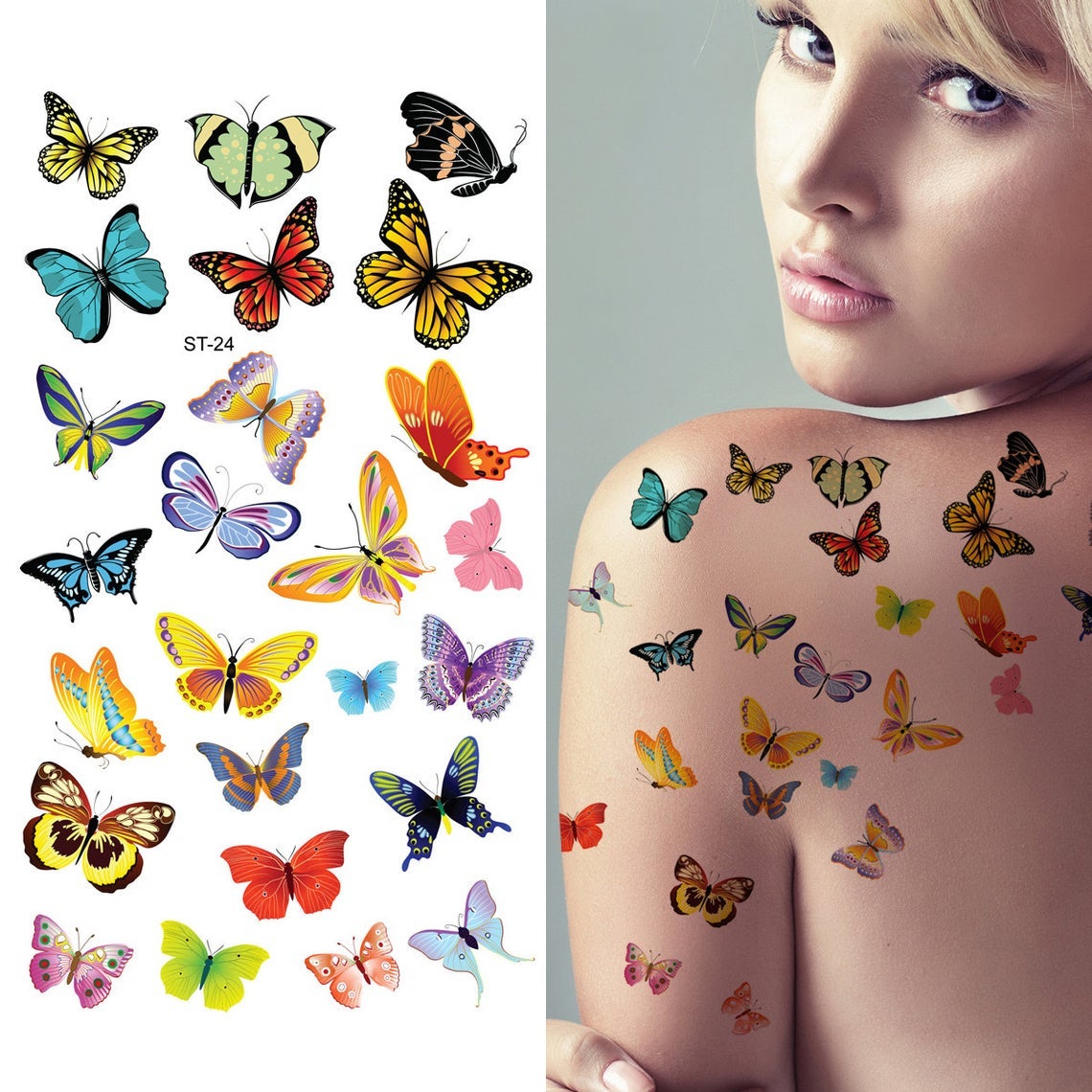 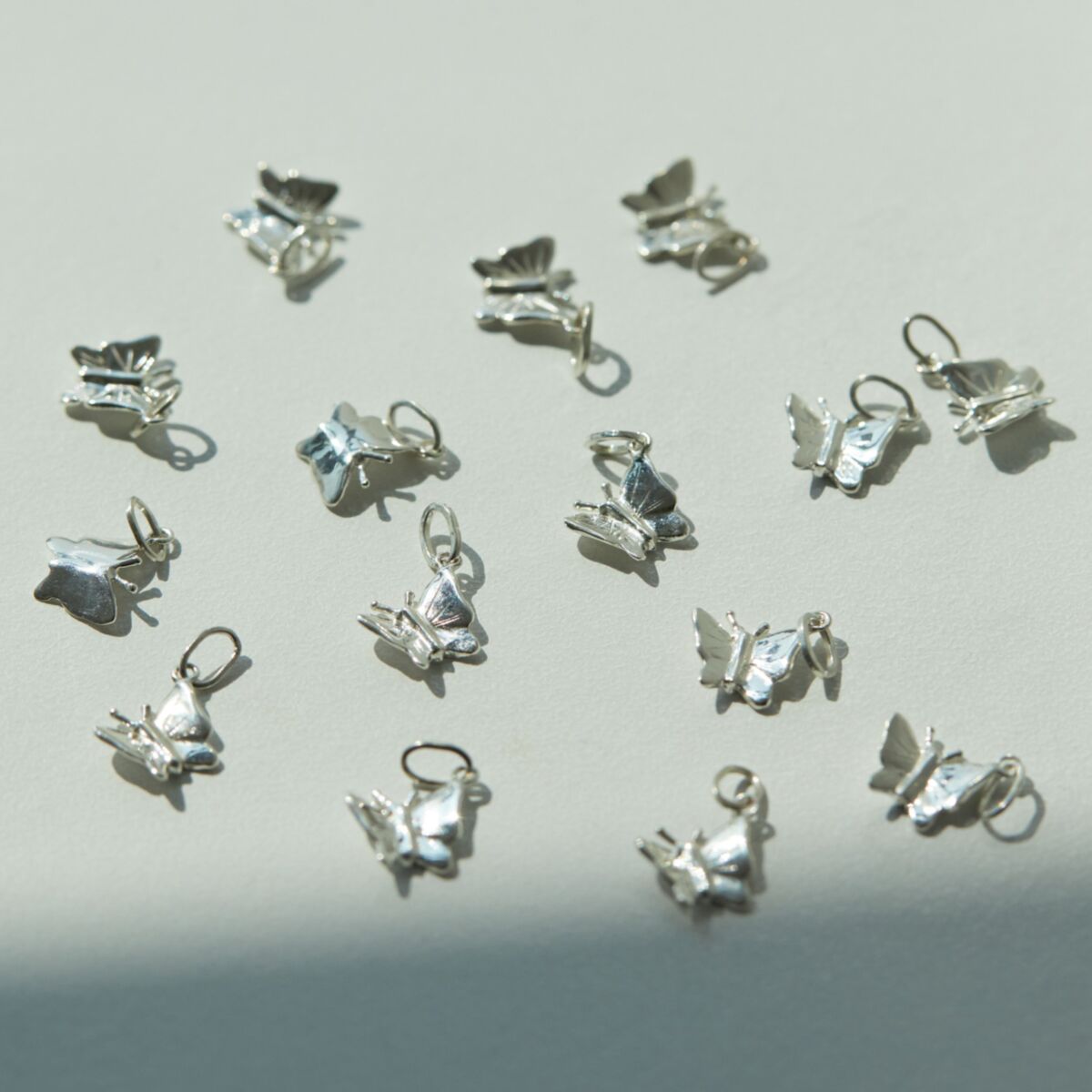 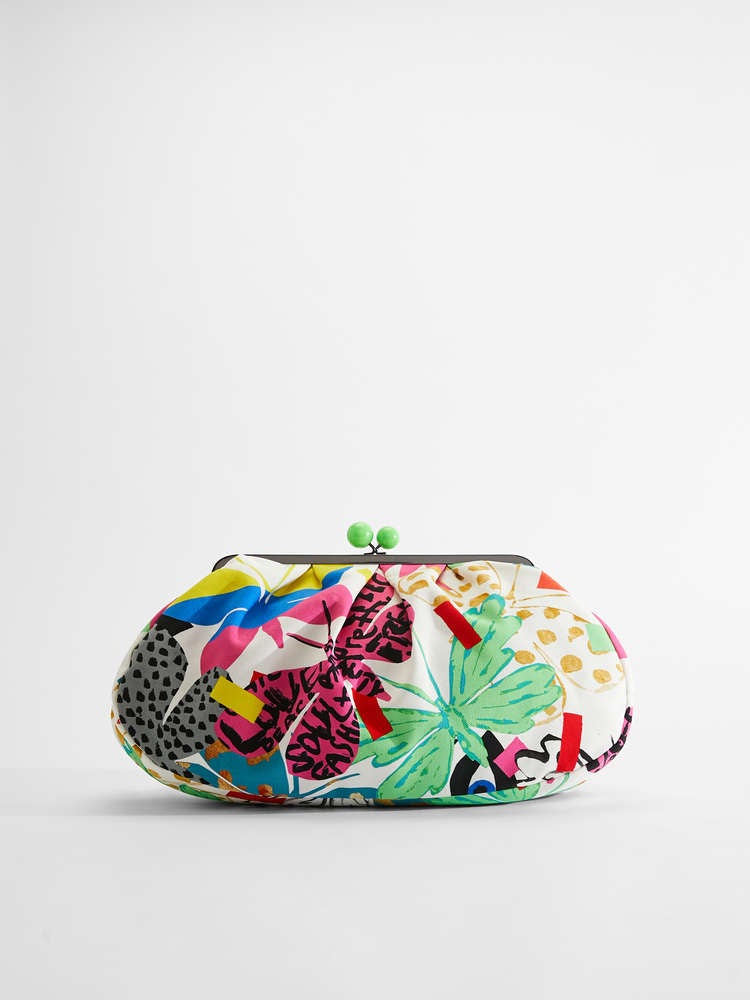 Weekend Max Mara
Large Printed Canvas Pasticcino Bag
$410.00
Max Mara
Whether you plan to wear a butterfly motif as your own sartorial armor, stylishly equipped to keep on keeping on amidst the uncertainty of this pandemic, or you want to pay homage to the personal changes you've embraced over the past year, this symbol — be it in your closet, your accessories collection, or your newfound stay-at-home sanctuary — might be just the winged thing you need to feel positively grounded.
At Refinery29, we’re here to help you navigate this overwhelming world of stuff. All of our market picks are independently selected and curated by the editorial team. If you buy something we link to on our site, Refinery29 may earn commission.
Lingerie
Sevigne Has The Comfy Under-$80 Lingerie You’ll Actually Re...
Valentine’s Day calls for flowers, sweet treats, and show-stopping lingerie sets. Yet, after V-Day ends, we might still be relishing in chocolates an
by Vivien Lee
Deals
Abercrombie & Fitch Has All Its Iconic Jeans 25% Off
by Mercedes Viera
Most Wanted
Yes, Ethically Made & Affordable Fine Jewelry Does Exist
Timeless, luxurious, sustainable. These characteristics usually go with high price points and unattainability. But luxury brand Quince is challenging the n
by Victoria Montalti
Advertisement
Spring Fashion Guide
Dear Frances’ New Collection Has The Shoes That Just Might Be You...
If Cinderella found her glass shoe on the palace steps, I found mine within Dear Frances‘ Pre-Spring Summer 2023 Collection. I first discovered the
by Vivien Lee
Most Wanted
This Last-Minute Jewelry Sale Is A Treasure Trove Of Unforgettabl...
Searching for a new and unique jewelry brand is like a treasure hunt. But when you finally stumble on one like NAiiA, it’s a reward. Perusing the Los Ang
by Victoria Montalti
Deals
The 36 Best Early Presidents Day Sales You Can Shop Right Now
While February barely just started, it’s never too early to prepare for what, among the shopping cognoscenti, is a true sales holiday for the books.
by Mercedes Viera
Handbags
The Boho Leather Bag That Hundreds Of Reviewers Call “Perfect”
Does the perfect handbag exist? It’s a question that we find ourselves asking quite often as shopping experts, especially when fashion month rolls ar
by Amanda Randone
Shopping
Everlane’s New Drop Is Dressy, Wrinkle-Resistant, & Machine...
We’re very much guilty of describing Everlane as a source for effortless, elevated basics (granted, which the brand is!) — but its latest collectio
by Jinnie Lee
The Sell Out
Lululemon’s Fan-Fave Belt Bag Is Back In Stock After Sellin...
You never want something until you can’t have it. On The Sell-Out, we’re getting the scoop from your favorite retailers on what’s se
by Karina Hoshikawa
Most Wanted
A Guide To The Best Petite Jeans For Short Legs
As a person who stands at 5’3″, I understand firsthand the struggle of finding a solid pair of jeans that doesn’t need further alteration
by Jinnie Lee
Jumpsuits
The 10 Best Jumpsuits That Satisfy A One-And-Done Kind Of Day
by Jinnie Lee
Deals
Aesthetic Travelers, Rejoice! Steamline Luggage Is Offering Up To...
Suitcases are, more often than not, a necessary evil at best. Sure, they store our clothes and the souvenirs we’ve made the misguided choice to bring hom
by Sarah Crow
Advertisement
Advertisement
Discover
R29 Stories & News
Watch
R29 Original Series & Films
Shop
R29's Most Wanted