Skip navigation!
Story from Demystified
When it comes to gems the hidden ones are often stories, not stones. Welcome to Demystified, where we look beyond the jewelry box, past our closets, and into the depths of our most cherished possessions to reveal their cross-cultural significance.
Fashion may be cyclical by nature, but it's also reactive by design. So as part of the ongoing search for some kind of meaning amidst tumultuous times, it's fitting to see shoppers gravitate towards items offering them just that: a lion-like ring that stands for strength, for example, or a horseshoe talisman that signifies good luck. Now, with a new season upon us, there's a slew of trends cropping up to help ease us into 2020's next looming chapter of uncertainty — and according to Chinese-born and New York-based designer Daisy Wang, the already ubiquitous Yin and Yang symbol makes sense for the transitional period ahead. Below, Wang takes us through the powerful meaning behind this ancient Chinese symbol that we've been noticing everywhere.
Advertisement
Dawang's Lunar New Year capsule, pictured here, finds Yin and Yang through the mix of dramatic colors and traditional Chinese fabrics, embracing the vibrant moods and longstanding traditions that come with the celebrated time of year.
“

The use of the symbol in jewelry and garments started off as a belief that, based on the implication of Yin and Yang, it will help the wearer balance the good and evil in their lives. 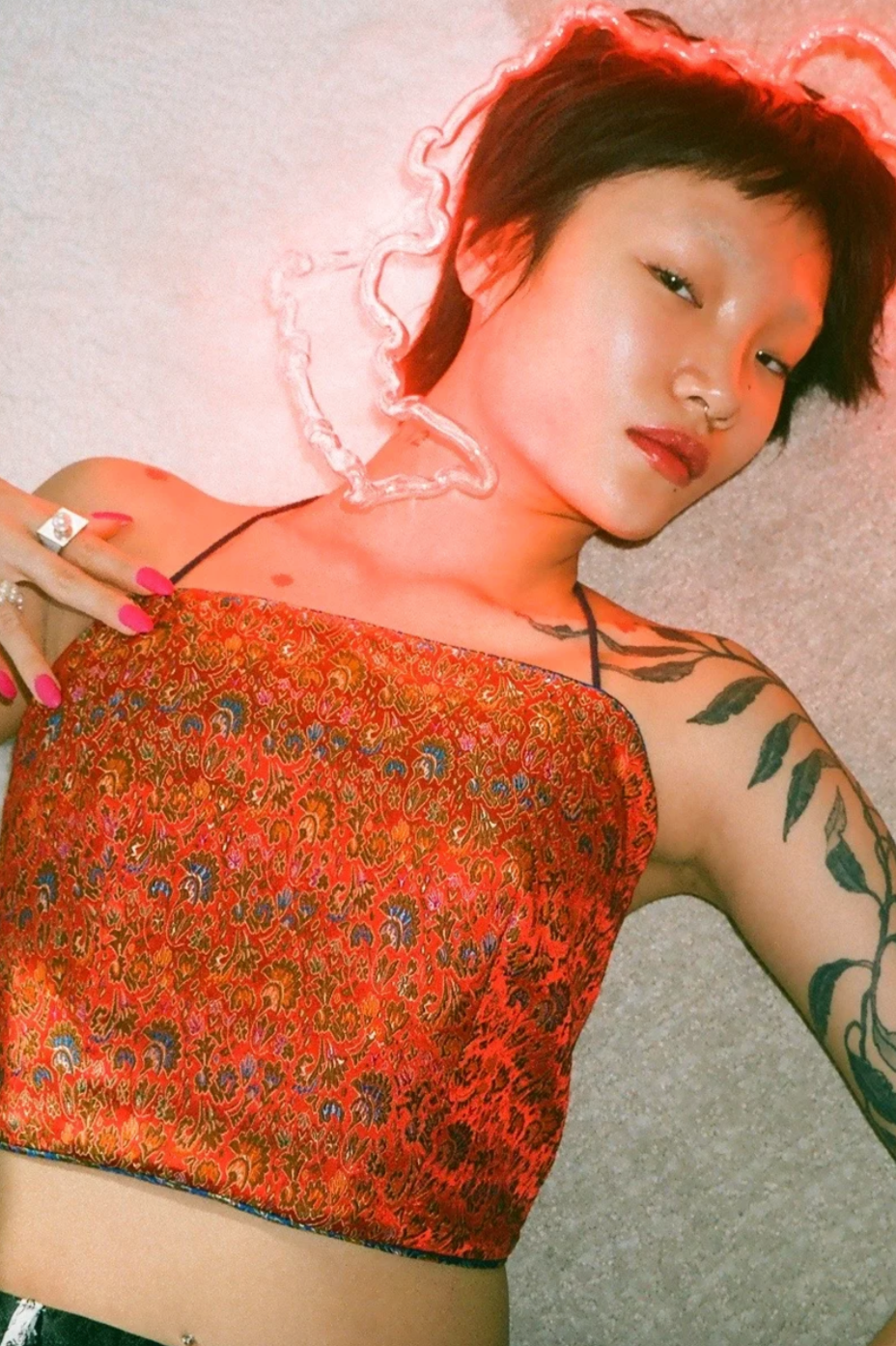 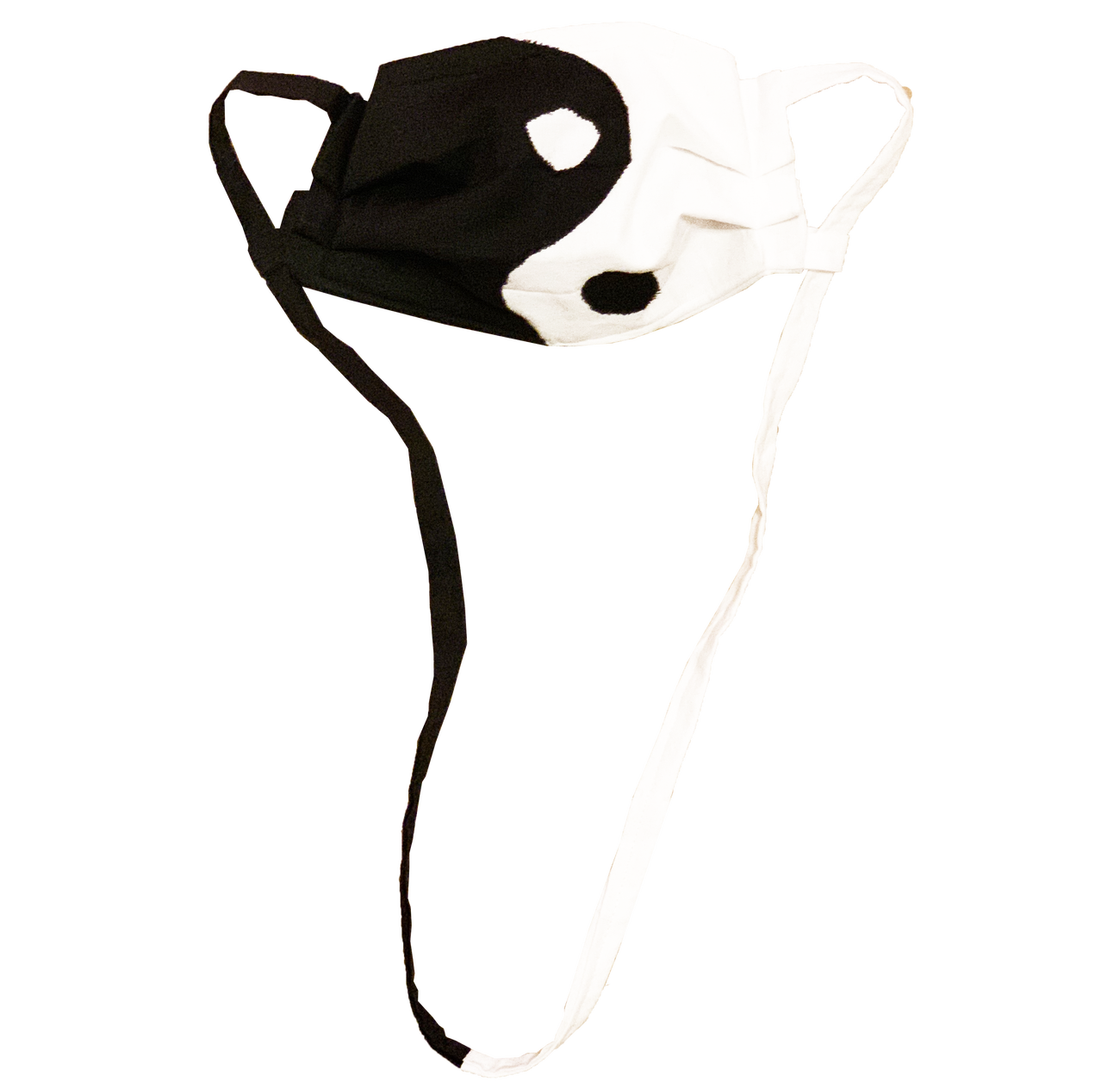 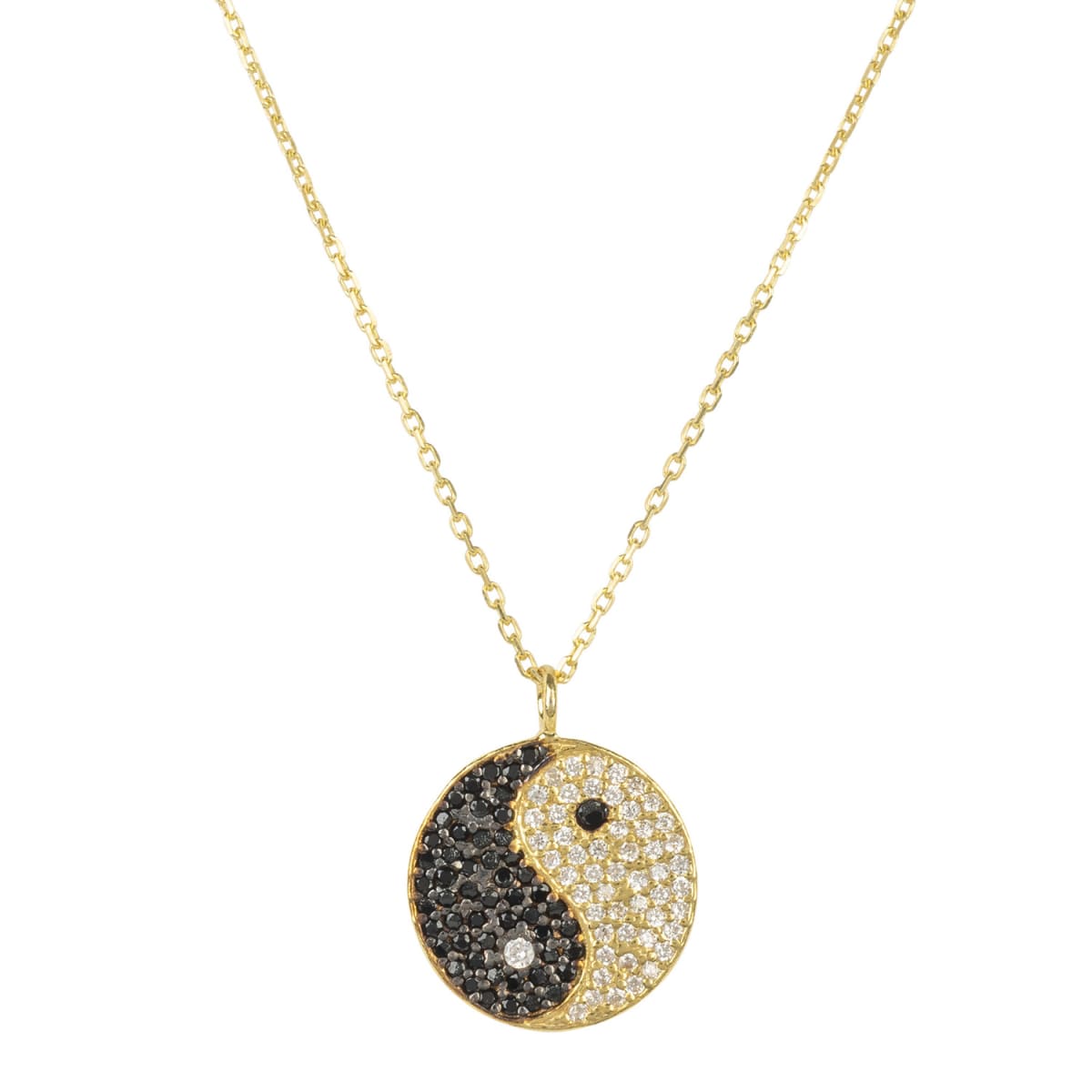 LATELITA
Yin & Yang Pendant Necklace Gold
$83.00
"The use of the symbol in jewelry and garments started off as a belief that, based on the implication of Yin and Yang, it will help the wearer balance the good and evil in their lives," says Wang, founder of the contemporary chinoiserie streetwear brand Dawang. She points to the vibrant, contrasting colors mixed with traditional Chinese fabrics of her Lunar New Year capsule, which launched in late January, as an example of the subtle ways this idea of dualism manifests in clothing design. While the Yin-Yang motif itself isn't visible in her garments, its harmonious energy is at the core of the entire collection. More recently, however, the prevalence of this symbol has been less nuanced as it sweeps our social feeds in the form of manicures and masks while simultaneously popping up across collections by lust-worthy labels such as Staud, Gelareh Mizrahi, Fenty x Puma, and Balenciaga. Beyond its like-bait potential, the mainstream appeal of this black-and-white badge of balance is very much driven by the ancient principle it represents — one that's been part of Chinese culture since the start of its civilization.
“

The theory of Yin and Yang was first introduced seven thousand years ago by Fuxi, a culture hero in Chinese legend and mythology. 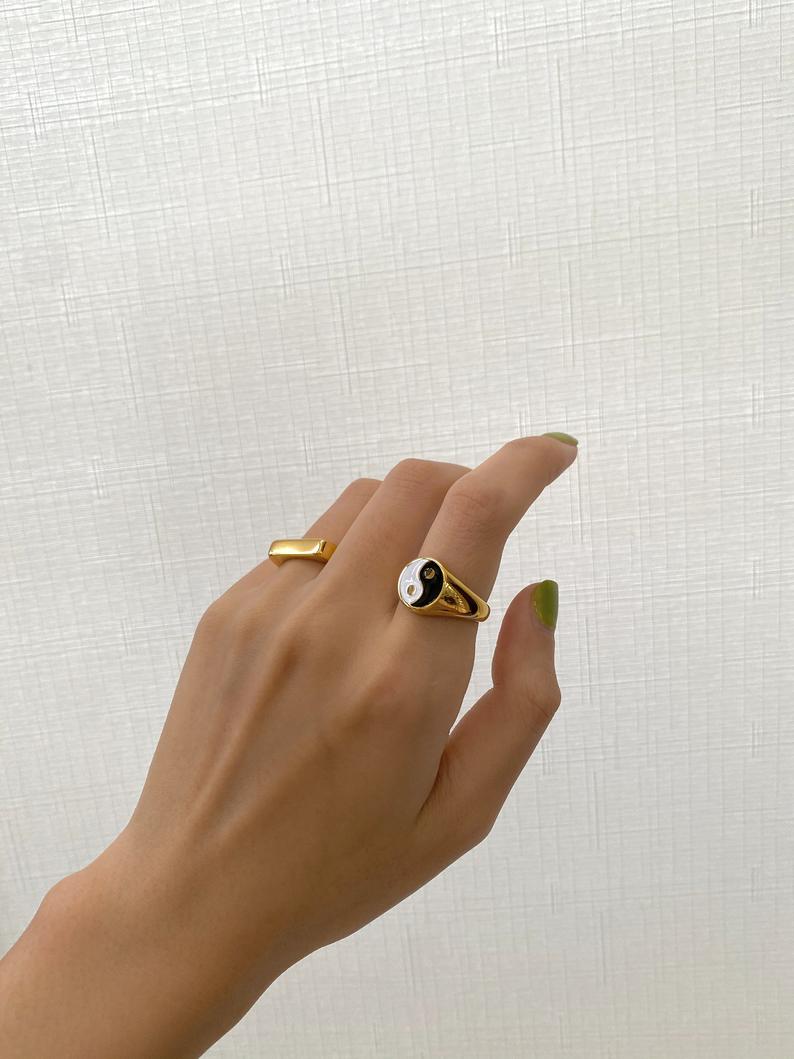 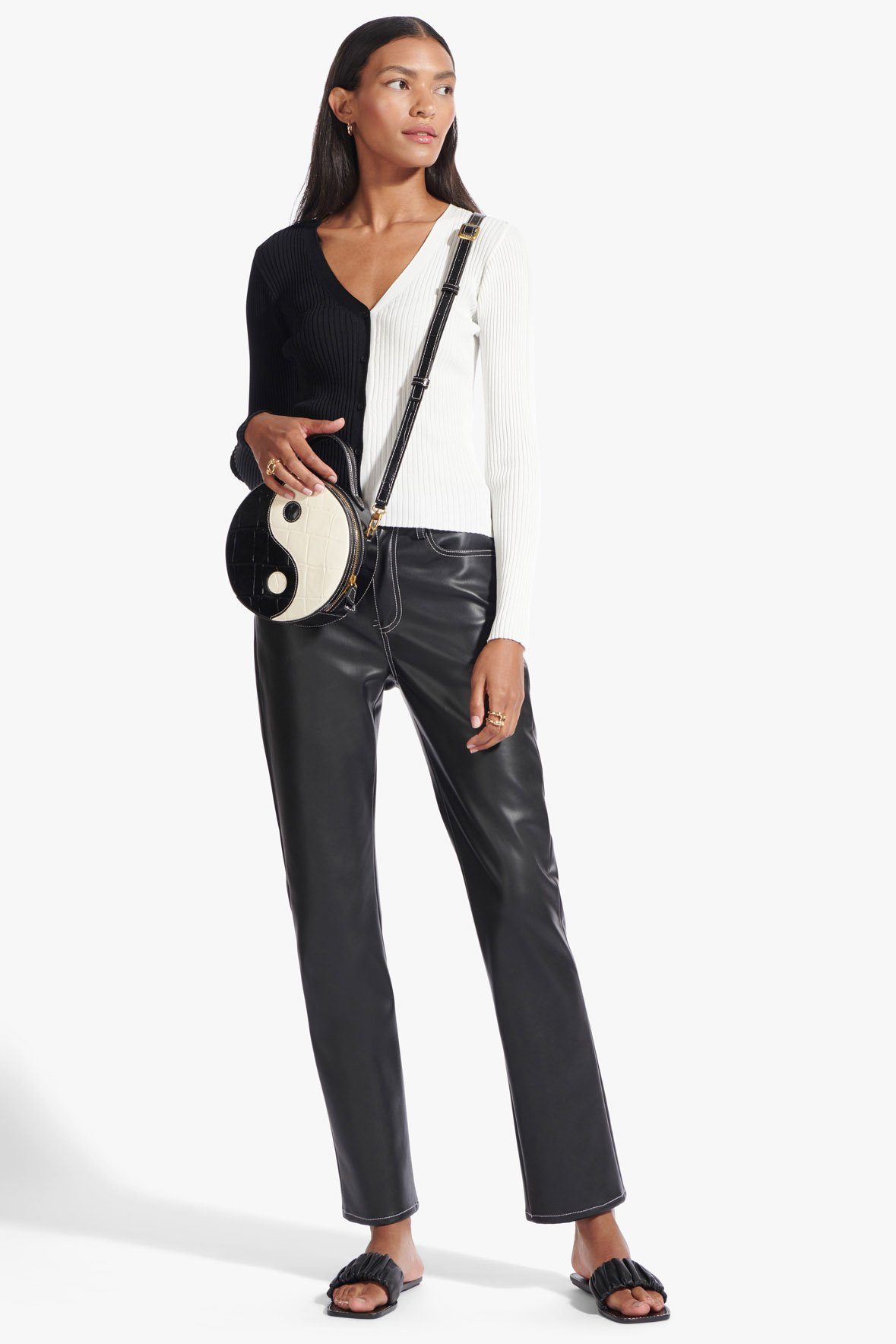 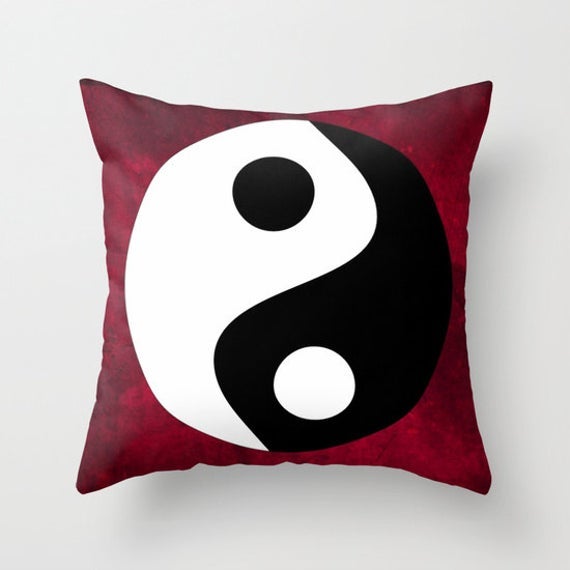 MGMart
Yin And Yang Throw Pillow
$34.95
"The theory of Yin and Yang was first introduced seven thousand years ago by Fuxi, a culture hero in Chinese legend and mythology," Wang explains, specifying that the popular Yin-Yang diagram we know today (also referred to as the symbol of Taiji) didn't come until later, during the Song Dynasty, when philosopher Zhou Dunyi used it to depict his interpretation of Fuxi’s texts. What's most remarkable about the diagram is that while you can't consider it to be a single, whole object due to the fact that it's clearly divided into two parts, it's not really two standalone forms either. Just like the sun and the moon, the light and the darkness, the good and the bad, even man and woman, one cannot exist without the other. The notion of Yin and Yang suggests that these seemingly opposite forces in the world are not just complementary, they're interdependent.
Advertisement
“

Yin and Yang cannot be separated from each other as there’s root of Yang in Yin, and root of Yin in Yang. 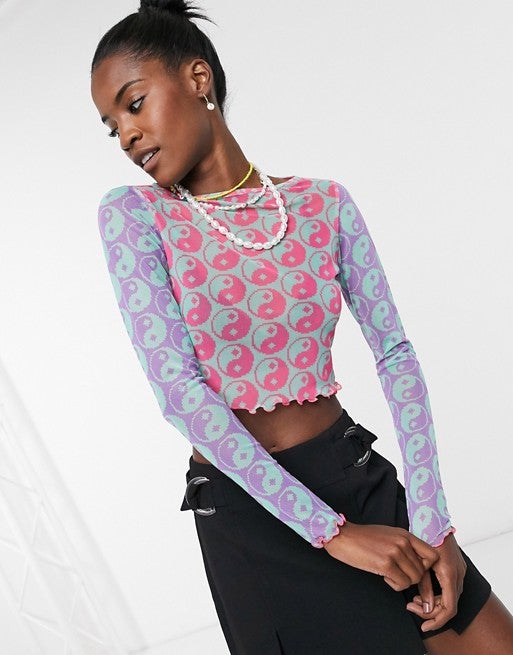 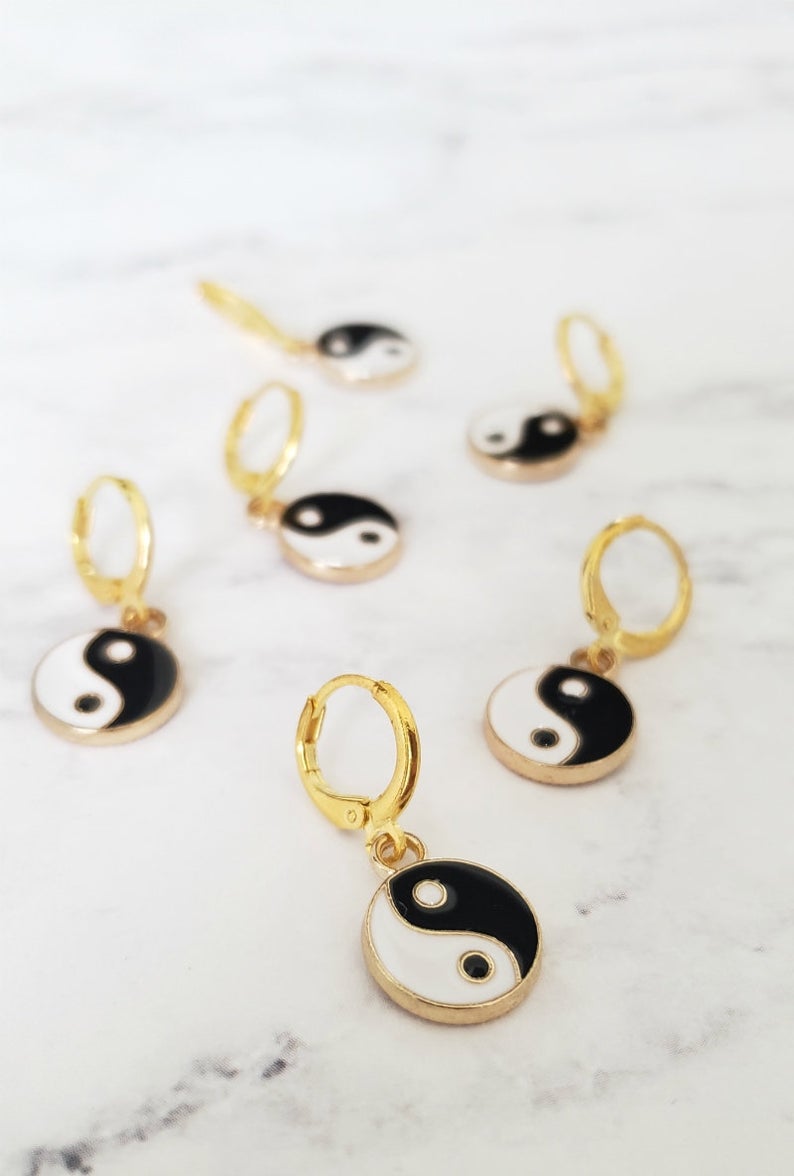 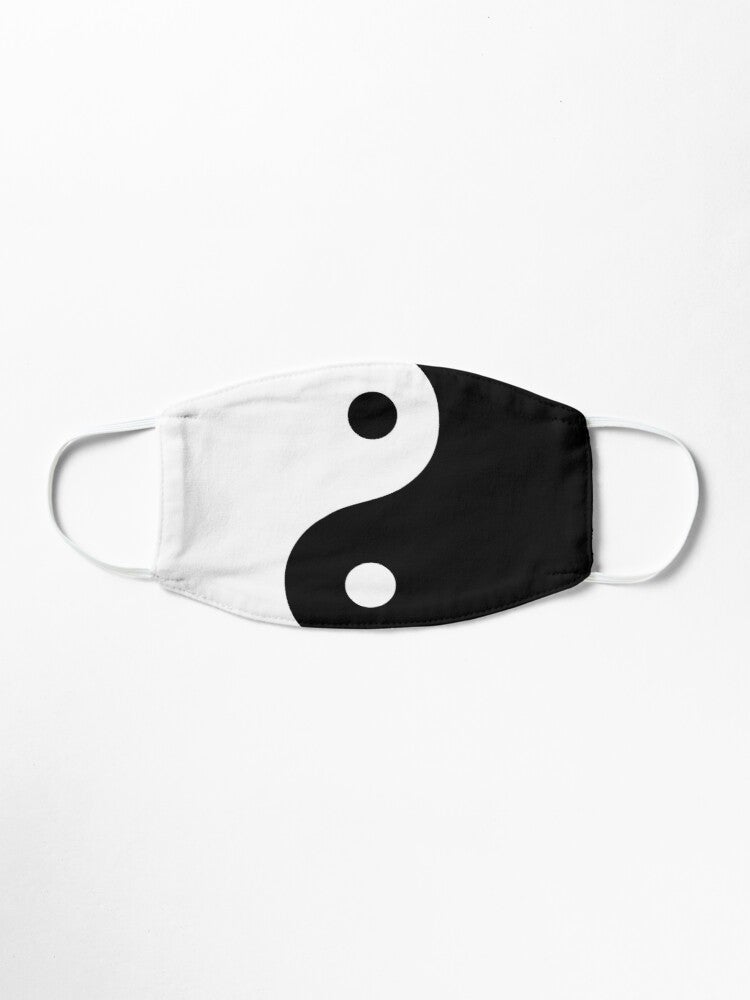 Elena Ivan - Papadopoulou
Yin Yang Minimal Face Mask
$12.49
"[This concept] forms the way we view everything in the world... Yin and Yang cannot be separated from each other as there’s root of Yang in Yin, and root of Yin in Yang," Wang says. It's a powerful perspective that definitely resonates at a time where that delightfully familiar rhythm of back-to-school month is punctuated with a peculiar sense of dread as we all hold hands (but not actually!) and collectively stare into the great void of the unknown. We may yearn for the good old days with less gaping blank spaces in our social calendars, but the mere idea of a germ-infested gathering is enough to have us dousing ourselves with hand sanitizer right now. In this confusing sea of contrasts, it's the concept of balance and interconnectedness that can keep us afloat — so if accessorizing with a reminder of that philosophy gets us one step closer to practicing it effectively, then count us in. 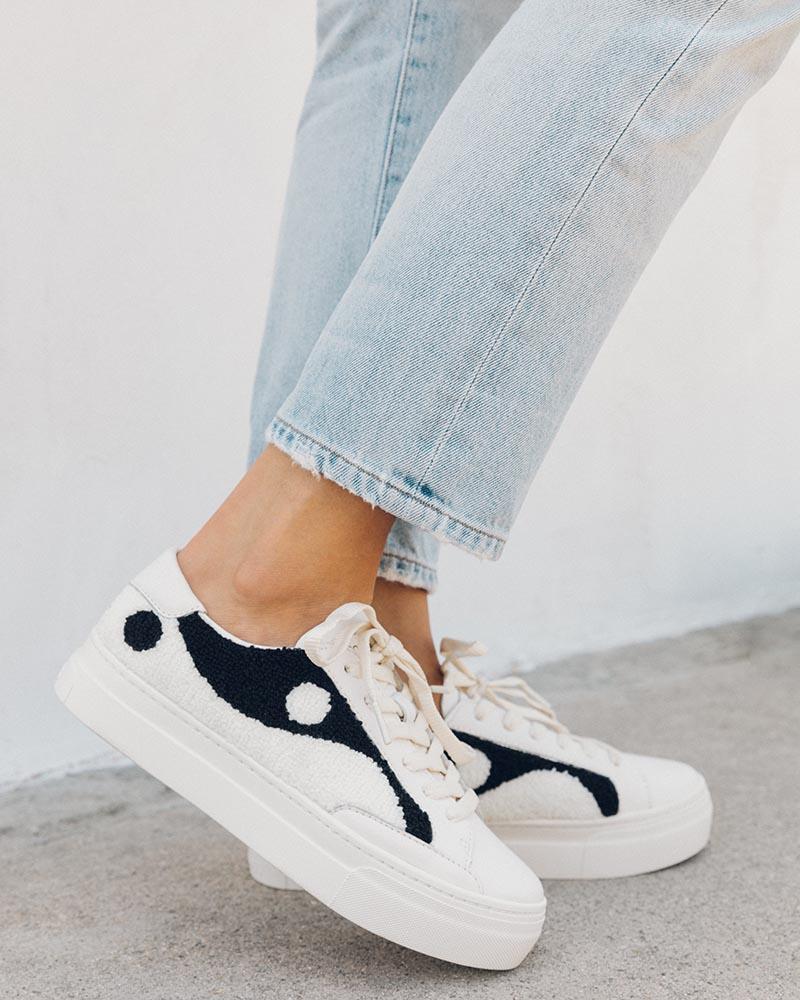 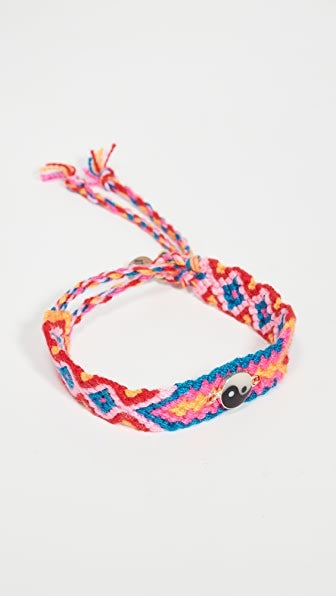 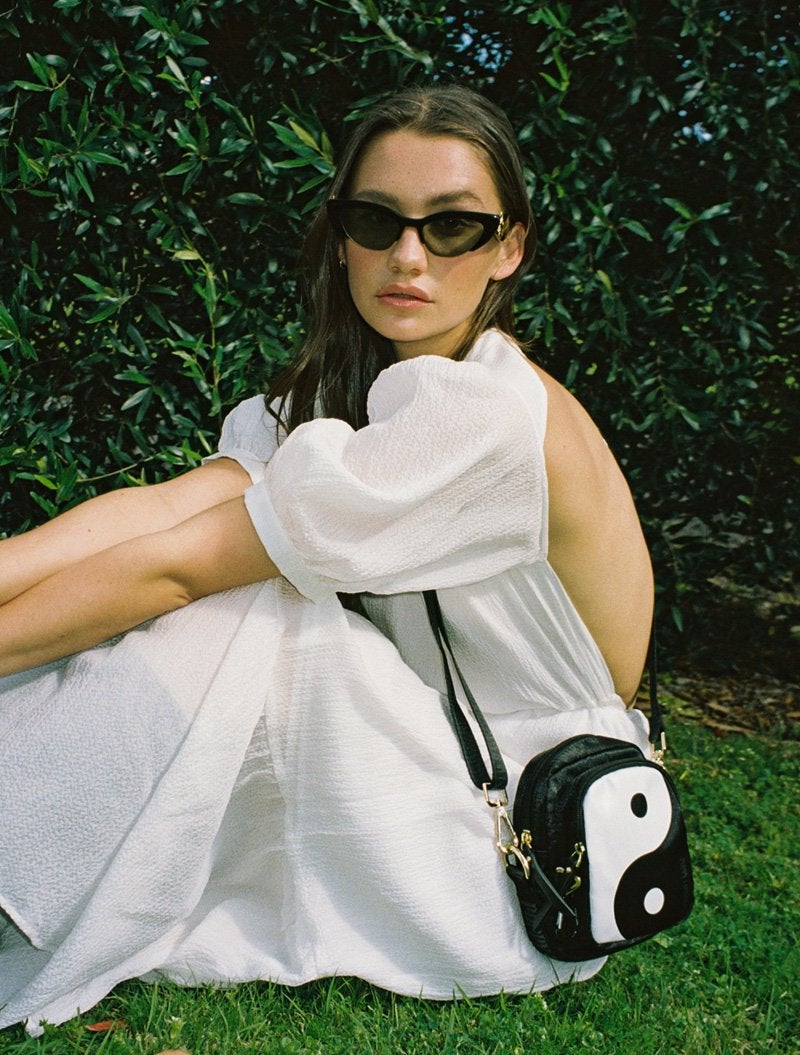 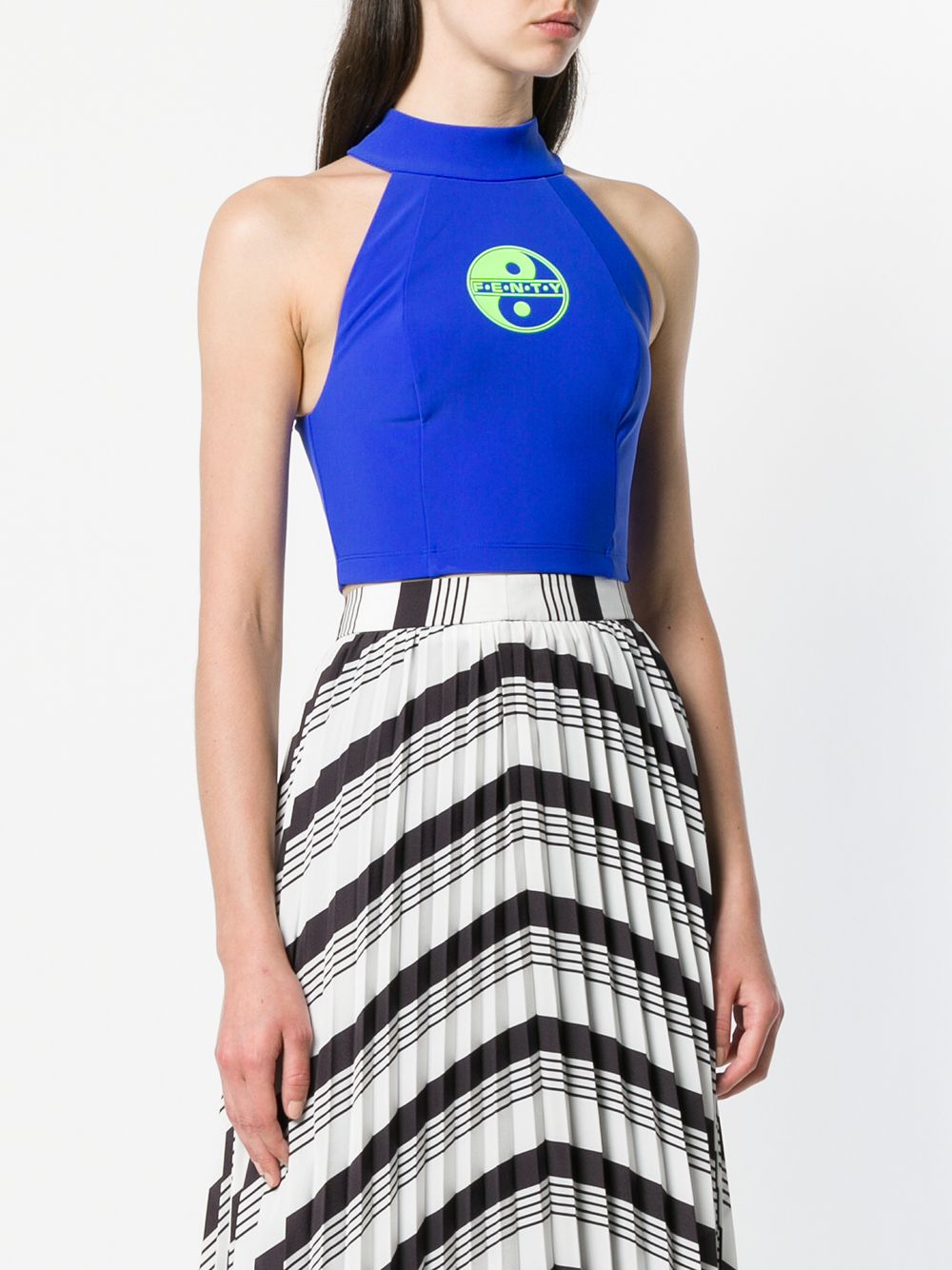 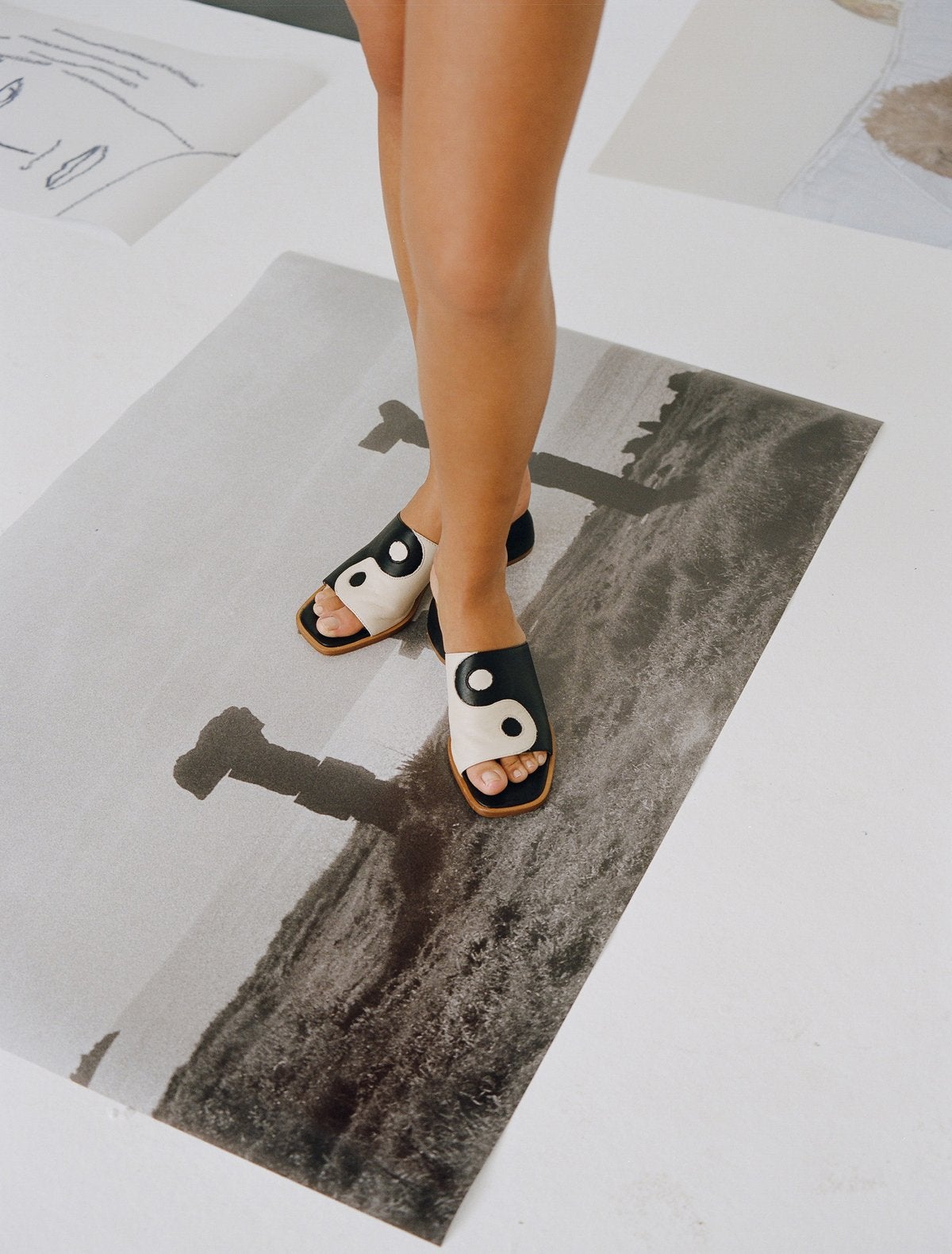 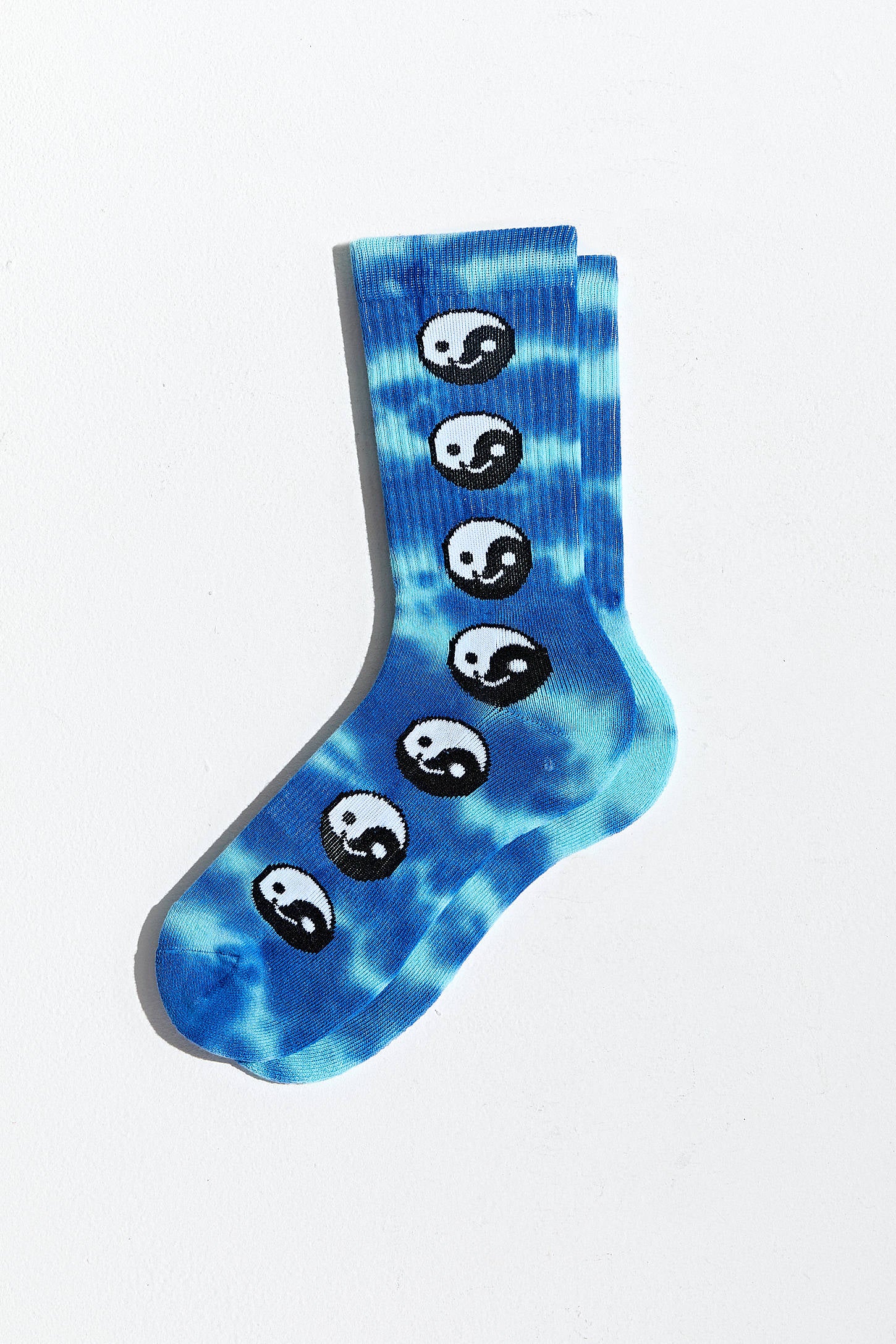 Urban Outfitters
Repeat Yin Yang Tie-dye Crew Sock
$10.00
At Refinery29, we’re here to help you navigate this overwhelming world of stuff. All of our market picks are independently selected and curated by the editorial team. If you buy something we link to on our site, Refinery29 may earn commission.
Shopping
30 Gifts That Will Impress Your “Difficult” Valentine
by Emily Ruane
Shopping
37 Valentine’s Day Gifts For The Guy In Your Life
by Bobby Schuessler
Most Wanted
Get The Perfect Gift For Your Valentine From These Black-Owned Je...
by Alexandra Polk
Fashion
Under-$150 Date Dresses Just In Time For Valentine’s Day
by Ray Lowe
Shopping
Think Outside The (Chocolate) Box With These 26 V-Day Gifts
by Emily Ruane
Style
21 Plus-Size Shops That Aren’t Fast Fashion
by Eliza Huber
Fashion
Savage X Fenty’s Valentine’s Day Collection Comes With A “C...
by Eliza Huber
Most Wanted
Shhh, Madewell’s Secret Stock Sale Has New Styles Up...
by Ray Lowe
Guide To Wearing Leggings
Aerie’s Viral Crossover Leggings Are Back In Stock Again (But Not...
by Emily Ruane
Shopping
I Am Obsessed With This Sold-Out Balaclava…For Dogs
by Morgan Baila
Workout Clothes
Walmart Just Launched A New Activewear Line With This Legendary R...
When World Rugby Hall of Fame member Phaidra Knight was growing up in rural Georgia, she recalls, “girls just weren’t allowed to play football.”
by Emily Ruane
Most Wanted
18 Amazon Valentine’s Day Gifts They’ll Swoon Over
by Karina Hoshikawa
Discover
R29 Stories & News
Watch
R29 Original Series & Films
Shop
R29's Most Wanted