Skip navigation!
Story from Amazon
Of the many cultural shifts brought on by the pandemic, perhaps the oddest was the way it awakened a desire to find a meadow and frolic wildly through it, leaving our worries behind in a grassy wake. As our social feeds became populated with sourdough starters and odes to nature, the fantastical appeal of cottagecore fashion — which actor and blogger Michelle Hopewell described to Refinery29 as "dressing like a storybook character" — was impossible to ignore. Nap dresses, tiered silhouettes, and ultra-long styles reign over closets in which jeans and work clothes were once the norm. And prairie-inspired attire isn't going anywhere, at least not according to Amazon, where yet another frock of this kind has gone viral. What's so special about this one, you ask? Well, it's got lots of pregnant women singing its praises (and posing for photos) — and it's not even made for maternity wear. We had to investigate.

Let's start with the sheer number of ratings and comments this flowy frock, brought to you by the brand R.Vivimos, has amassed over the course of its brief but bountiful cyber life. It's got an impressive 2,485 reviews, the majority of which tout a five-out-of-five star rating. The square neckline, the puff sleeves, and the $35 price tag seem to have successfully hit a sartorial trifecta for shoppers in search of something easy, ethereal, and fit for a picnic in a field. Customers have posted about wearing it for fairy costumes, cottagecore shoots (yes, it’s a thing!), and renaissance fairs, though they promise it's acceptable to wear in um, normal life, too.
Advertisement
“

I love how whimsical it is. I really felt like I was in a fairy tale! 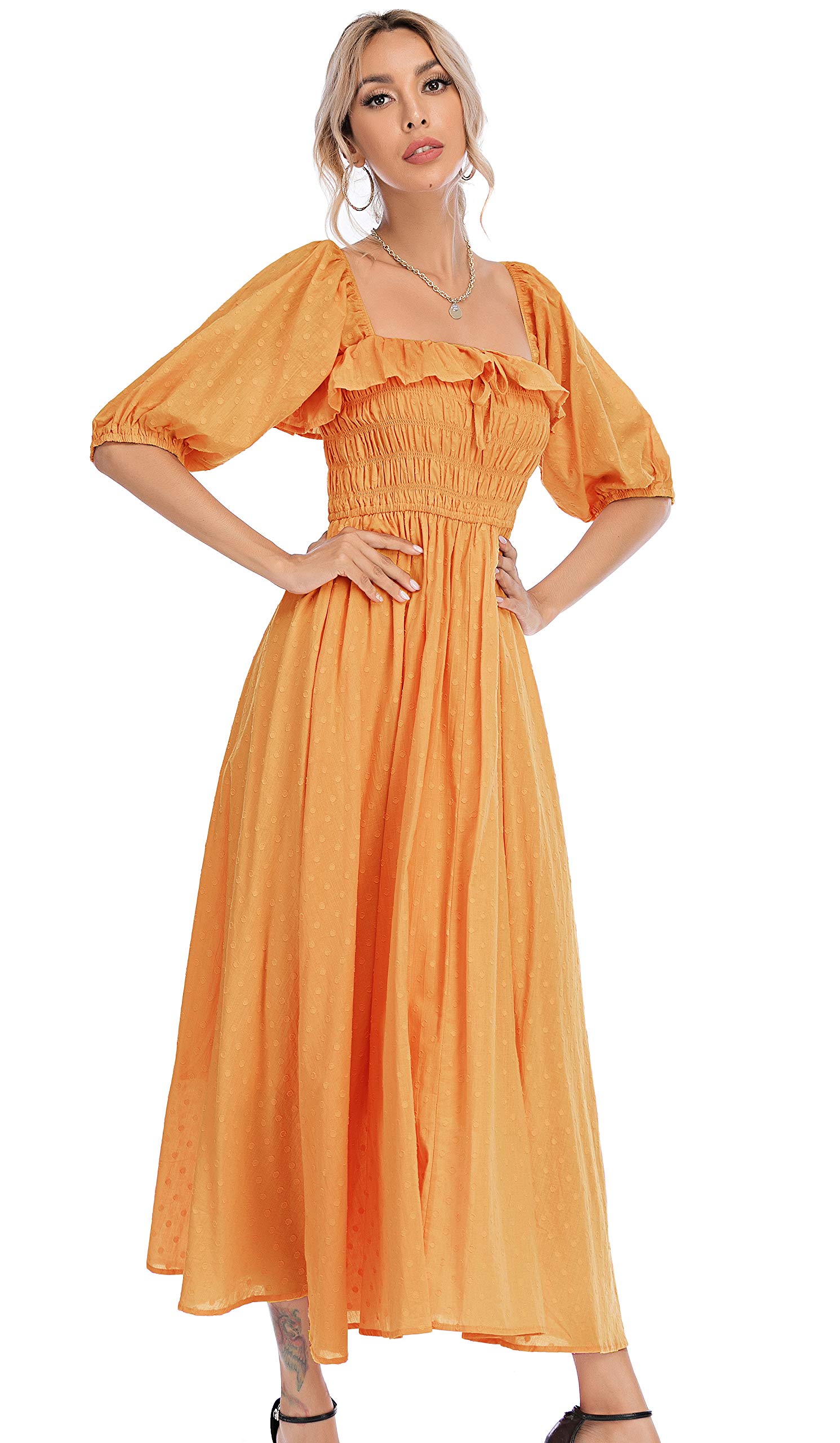 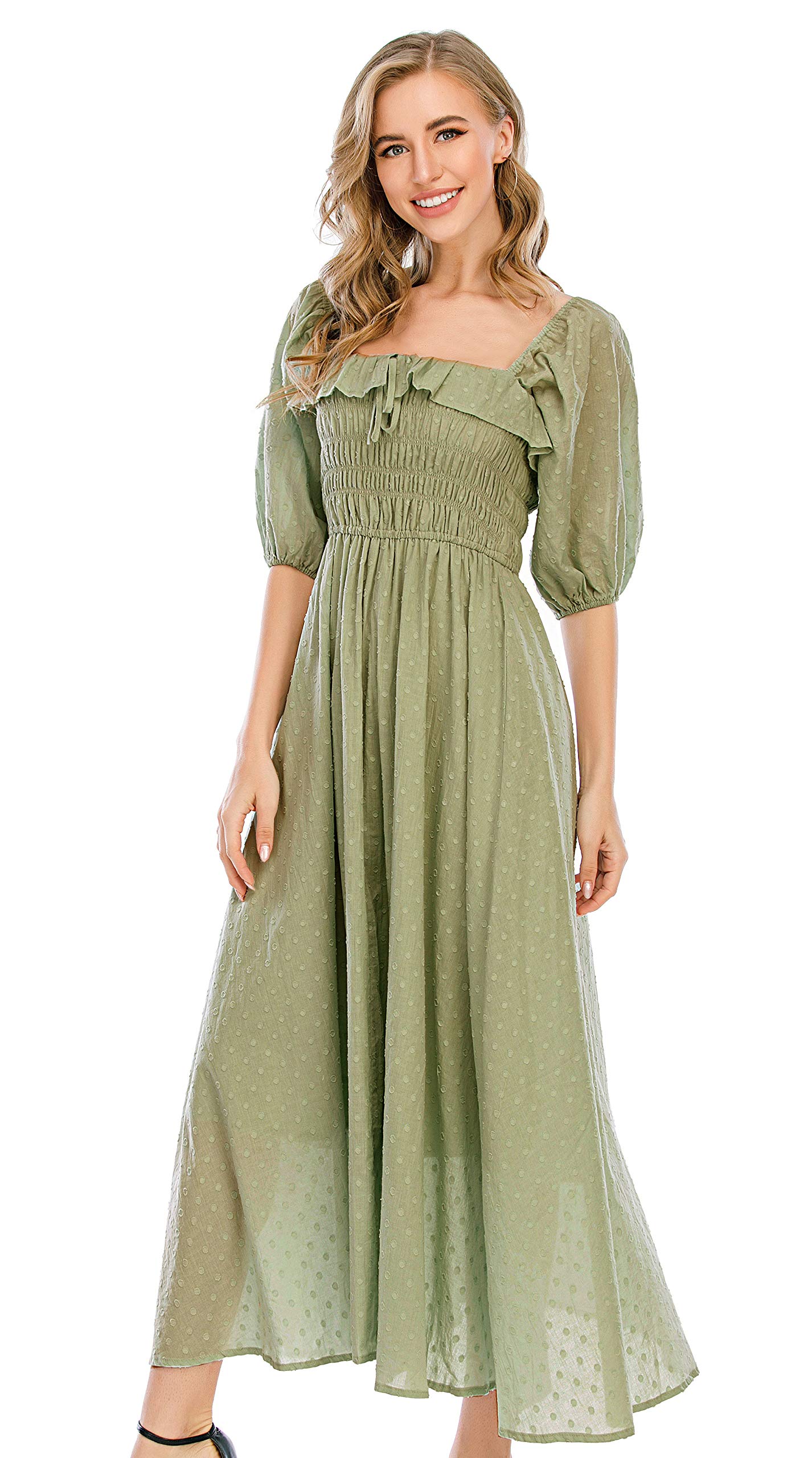 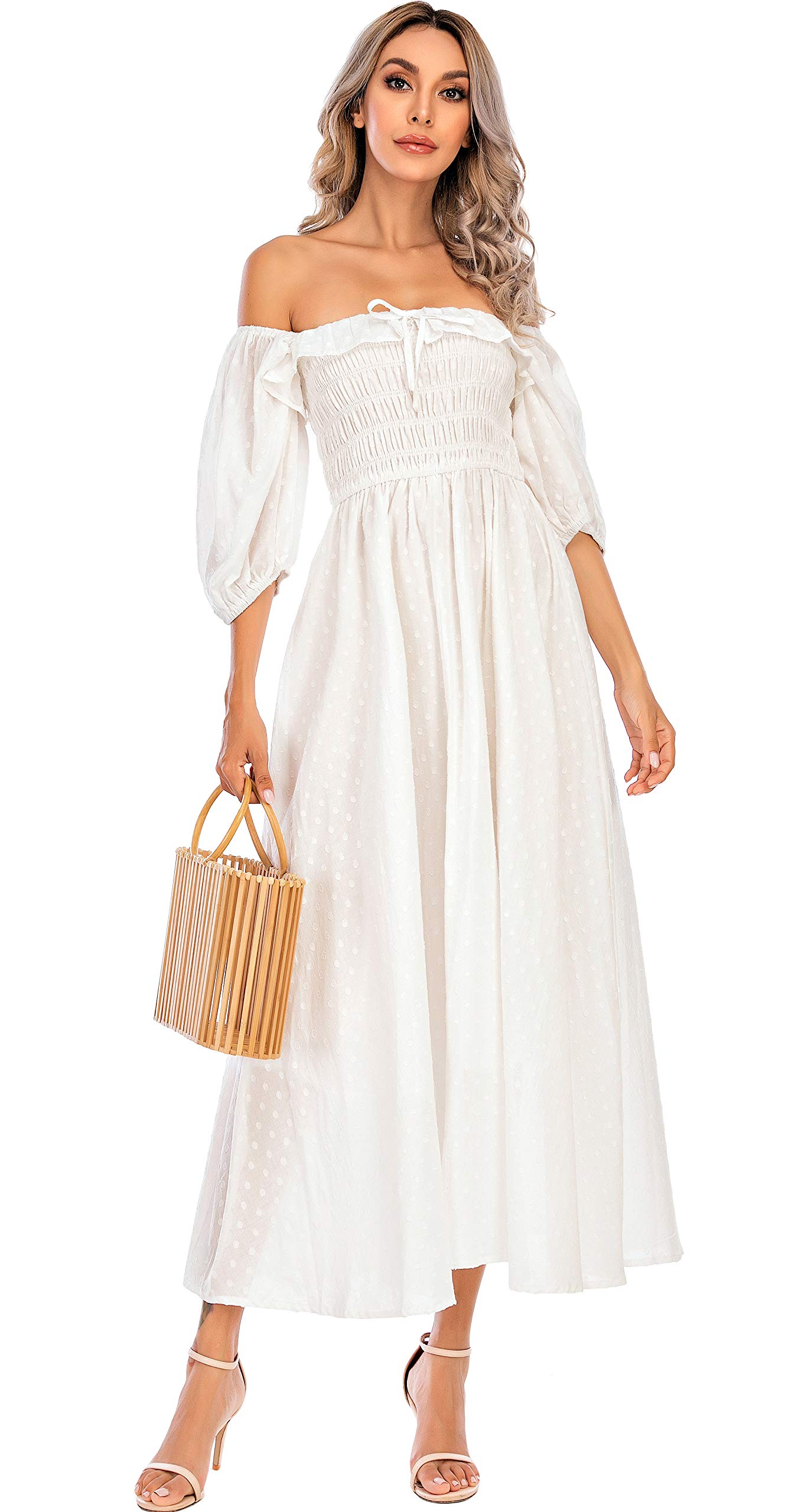 R.Vivimos
Half-sleeve Ruffled A-line Dresses
$33.99
Amazon
The reviews range from single-word posts (what more do you need when that word is "perfect"?) to digital novellas detailing everything from color to fit and shipping time. What our investigation revealed as the standout trend across these thousands of write-ups, however, was the popularity of this garment among many moms-to-be. Its relaxed silhouette means it can accommodate bumps of any size, with the possibility of continued wear post-partum. And for more than one belly-cradling lady, this super-dress of sorts was just what they needed while planning maternity shoots and pregnancy announcement photos.
Photo: Courtesy of Amazon reviewer Flower.
“


I feel like this dress will even fit me post-pregnancy. I absolutely love it.

Amazon Reviewer
”
“GET THIS DRESS!!! I had been searching for a dress for our maternity shoot… THIS dress swooped in and saved the day!” writes Amazon reviewer Kimberly, adding: "Also can we talk about the price?! SO affordable! I feel like this dress will even fit me post-pregnancy. I absolutely love it!” She even dropped the name of her photographer, for anyone who might be in need of more than a dress. Another reviewer named Mallory shared her similar experience of just about giving up on finding the perfect ensemble until this dreamboat of an option floated across the internet's sea of choice: "Ordered it like less than 3 days before my shoot, it came in time and looked amazing! It’s not even a maternity dress but fits like one has tons of room for your growing belly!"

Considering the style is ultra-lightweight, it makes sense that it's having a major moment as summer temperatures continue to climb. The only thing that's worse than clothing that makes you feel sticky and sweaty under the sun is feeling that way while pregnant and about to be photographed. Plus, the elasticized bodice makes for a flexible fit around the bust, and the ruffled frill along the neckline — well, that's just fun. If you've got a bump but remain undecided about how you want it to make its social media debut, then at least to scroll through the images posted in the review section of this Amazon item. Trust us, inspiration is endless.
Advertisement
Photo: Courtesy of Amazon user Kimberly.
This Amazon hidden gem has become so known for being THE maternity dress of all maternity dresses that some commenters have advised against getting it if you're not pregnant, due to the extra fabric and oversized shape. But some shoppers sans bun-in-the-oven have said that sizing down is enough to solve that issue, and they shared their own photographs as evidence. They're quick to pile on those stars, drawing comparisons to a Free People aesthetic and tossing in some styling tips to boot, such as adding a belt or opting for a strapless bra. Positive or negative, however, the critics overwhelmingly agree: You'll need to iron it first.

We'd like to conclude this report by sharing that whether you're looking to upgrade your maternity attire or you simply want to add a touch of whimsy to your everyday style, there's no right or wrong way to incorporate this dress into your summer-outfit rotation. But don't take it from us: According to Amazon reviewer Kristen, no matter who you are, "YOU NEED THIS DRESS."
“

Firstly, I looked as cute as a daisy. Secondly, mad comfy. Worth it.

Amazon reviewer
”
Photo: Courtesy of Amazon user Tabitha Agany.
At Refinery29, we’re here to help you navigate this overwhelming world of stuff. All of our market picks are independently selected and curated by the editorial team. If you buy something we link to on our site, Refinery29 may earn commission.
Shopping
30 Cute Slippers We’re Wearing Right Now
by Kate Spencer
Most Wanted
What To Wear On Game Day To Rep Your Team
by Karina Hoshikawa
Skirts
Celebrate The Return Of Pleated Skirts With One Of These Preppy P...
by Vivien Lee
Advertisement
Amazon
Another Amazon Prime Day Is Coming — Here’s Everything You Need T...
If you didn’t make the most of July’s Amazon Prime Day, then consider your day made. The epic online retailer just announced — out of th
by Emily Ruane
Cyber Monday
You Have Until Midnight To Score An Extra 40% Off At Madewell
by Mercedes Viera
Deals
J. Crew’s Chic Outerwear & Boots Are On Sale For 50% Off
by Mercedes Viera
Fashion
How The Boutique Black & Cremè Is Making Sustainable Fashion More...
As climate change awareness grows and consumer shopping habits shift, sustainable fashion has become more, well, in fashion than in the past. Even with the
by Taylor Bryant
Dresses
20 Stunning Evening Dresses For Any Budget
by Ray Lowe
Deals
8 Stores With Seriously Good Sale Sections
Do you ever find yourself clicking past page after page of a brand’s sale section, utterly and completely bored? Worry not, fair readers. We did all
by Mercedes Viera
Jumpsuits
The 12 Best Jumpsuits That Satisfy A One-And-Done Kind Of Day
by Jinnie Lee
Style
5 Types Of Shoes To Pair With Fall’s Denim Trends
by Eliza Huber
Fashion
28 Matching Sweatsuits Worth Living In
Here are stylish sweatsuit sets so comfy you won’t want to change out of them.
by Truc Nguyen
Advertisement
Advertisement
Discover
R29 Stories & News
Watch
R29 Original Series & Films
Shop
R29's Most Wanted