Hi, hello, and happy November! We're not sure how we even got here (week #666 in the chaotic tumble of months we're calling 2020... but who's counting?), but we've also arrived at the thirteenth installation of our Demystified series which, admittedly, is giving us a mild case of the heebie-jeebies. Is this just some creepy coincidence, or is it a sign from the sartorial powers that be? Whatever's behind this eerie alignment of events, be not afraid, because we asked jewelry designer Lynette Ong and she's assured us that there's nothing to be scared of when it comes to the number 13.

"The concept of a lucky number, as in one that brings prosperity, protection, and guidance, isn’t so prevalent in the West. But I grew up in the heart of Singapore where knowing your lucky number is like knowing your zodiac sign — you just do," she says. The value of one's destined digits is so important within Ong's culture that the 2014 launch of her jewelry brand, Edge of Ember, featured a whole Lucky Numbers collection. And go figure — it's one of her best-sellers to this day.
Advertisement
"I think ‘unlucky 13’ is more of a western thing," says jewelry designer Lynette Ong.
Shop This
Edge of Ember
Lucky Number Necklace
$125.00
Edge of Ember
Ong explains that this Chinese tradition has been adopted by many countries in East Asia where age-old myths and superstitions still play a part in contemporary life. Much like in astrology, your lucky number is not a random selection, but rather determined at birth by an ancient calculation. Curious what your's might be? Us too, and you don't need to be a wizard to figure it out — there's an easy-to-follow formula for that. Even pronunciation matters when it comes to fortuitous numerals in Chinese culture, which is why despite its bum rap here in the U.S., 13 is a real winner in other parts of the world. "Four sounds like death [in Japanese, Cantonese, and Mandarin], so four is the bad luck number rather than the number 13," Ong says. "The number 13 means 'assured growth' or 'definitely vibrant' in Chinese. That’s why it's actually considered very lucky."

Still, regardless of its perceived goodness elsewhere, the number 13 is often met with real fear outside of Asia. So real, in fact, that it's got an official name: triskaidekaphobia. Buildings have noticeably absent 13th floors while slasher films like Friday the 13th certainly aren't doing the ill-fated double-digit any favors. The roots of 13's unpopularity remain unclear, but some theories suggest its unholiness is biblical; the Last Supper was attended by 13 people, one of whom turned out to be the ultimate betrayer. On top of that, 13 will forever live in the shadow of its younger sibling, 12, which is appreciated for its evenness and thus used for everything from the number of months in a year to the hours on a clock.
Advertisement 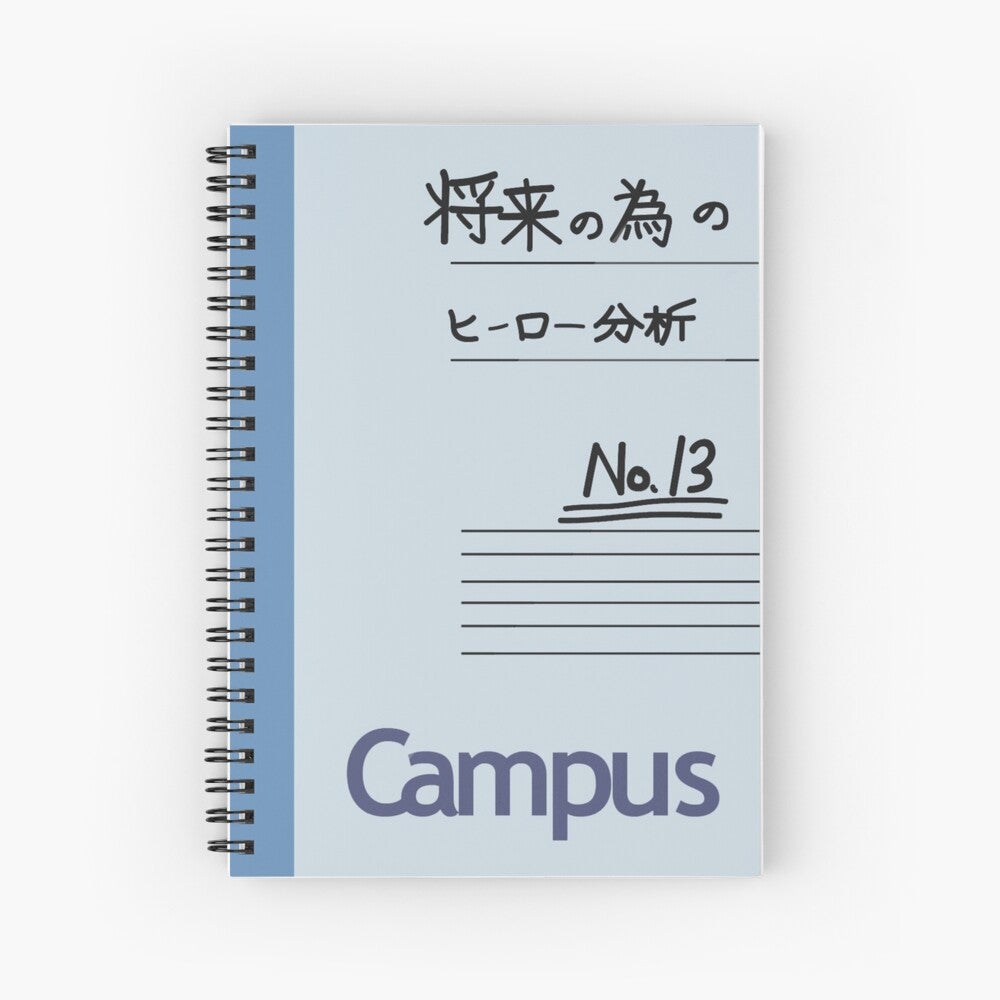 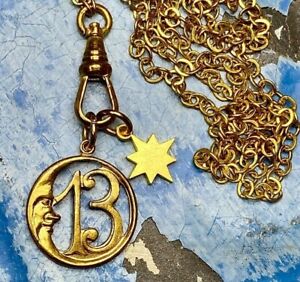 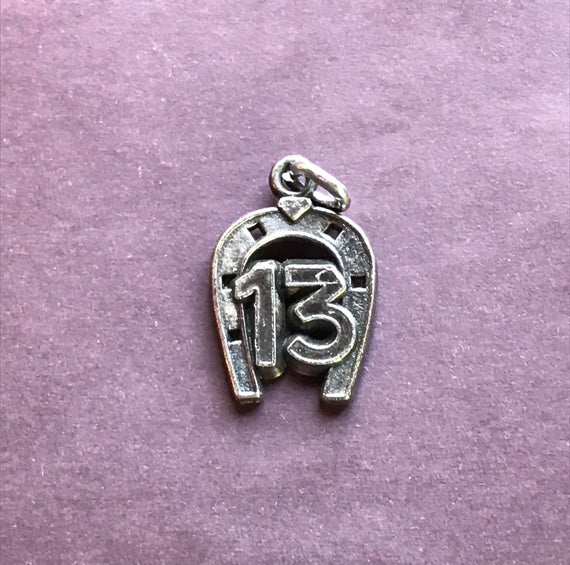 OnlyHorses
Antique French Equestrian Number Pendant
$30.57
Etsy
But Ong's insight paints the number 13 in a brighter light, and even if it doesn't turn out to be your lucky number, it can make for a special and personalized gift when commemorating a sentimental date, a birthday, or an anniversary. And while we'd never attribute Alex Morgan's bad-assery on the soccer field to anything other than pure skill, one has to ask, if 13 has been carried proudly on the back of an American hero, shouldn't we all be warming up to it by now?

If you're still not convinced, maybe Rihanna's decision to emblazon pieces of her Fenty x Puma collaboration with the ol' one-three will change your mind. The way we see it, that's one helluva stamp of approval, and it might just be worth taking the risk with some #13 apparel of our own. From sports jerseys to antique charms, there are plenty of unique ways to invite these digits into your home and your jewelry box without having to worry about any kind of misfortune — at least not as far as Ong is concerned. 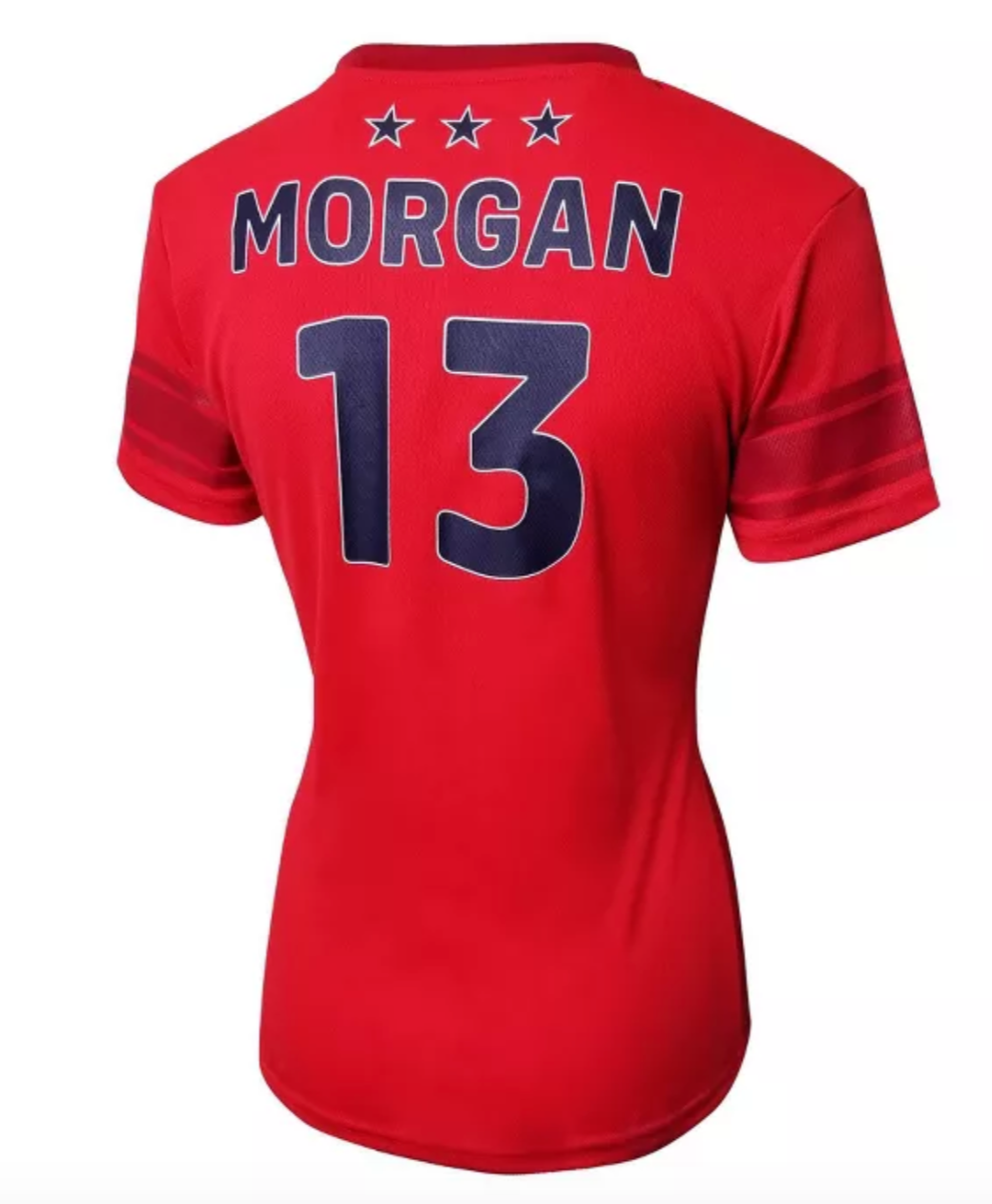 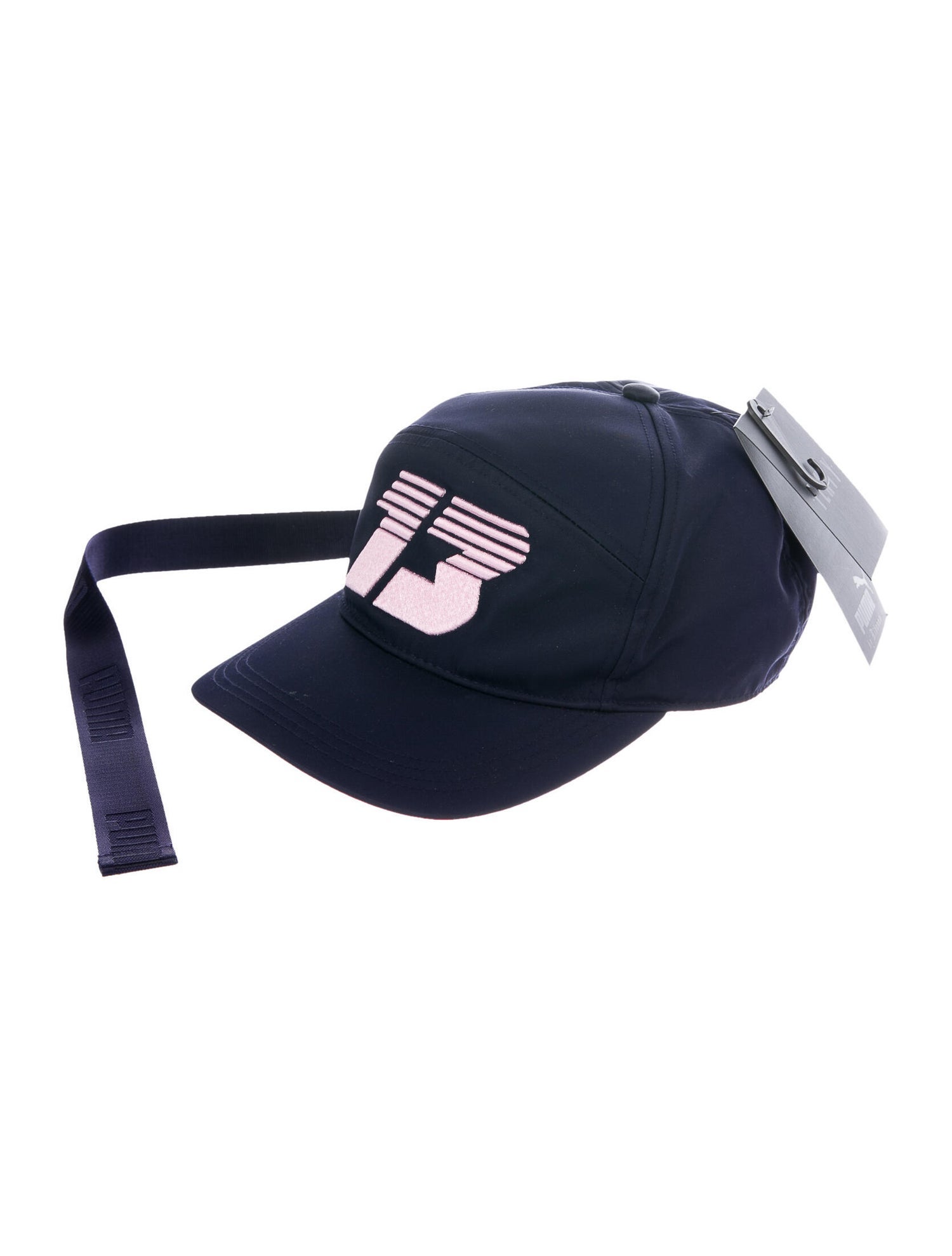 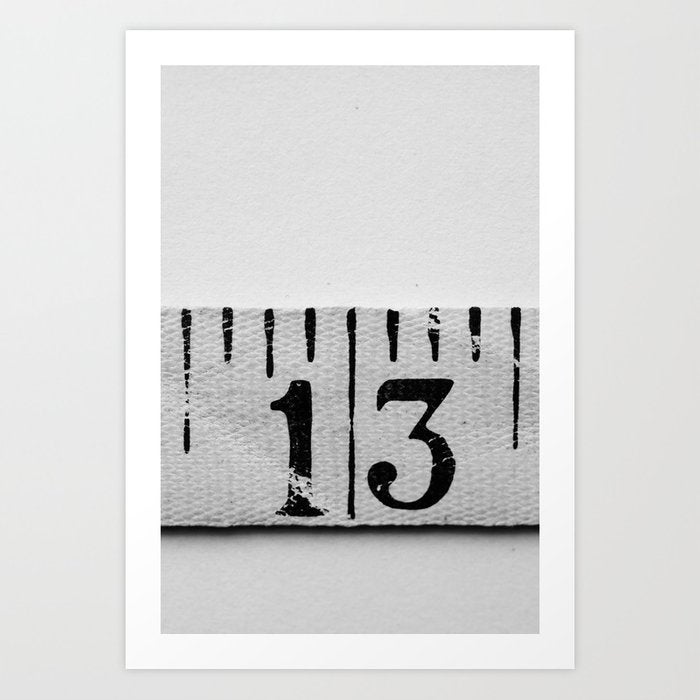 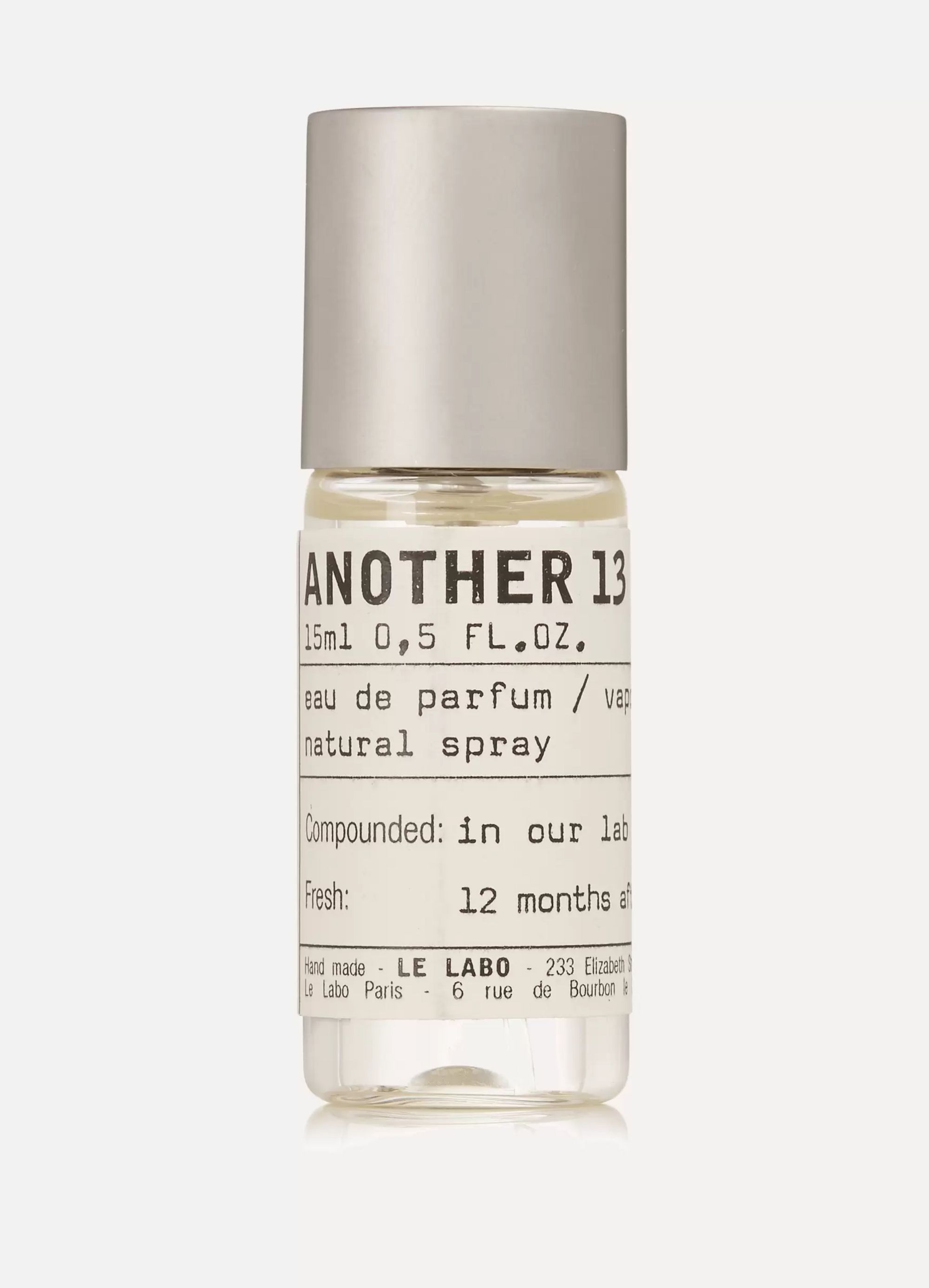 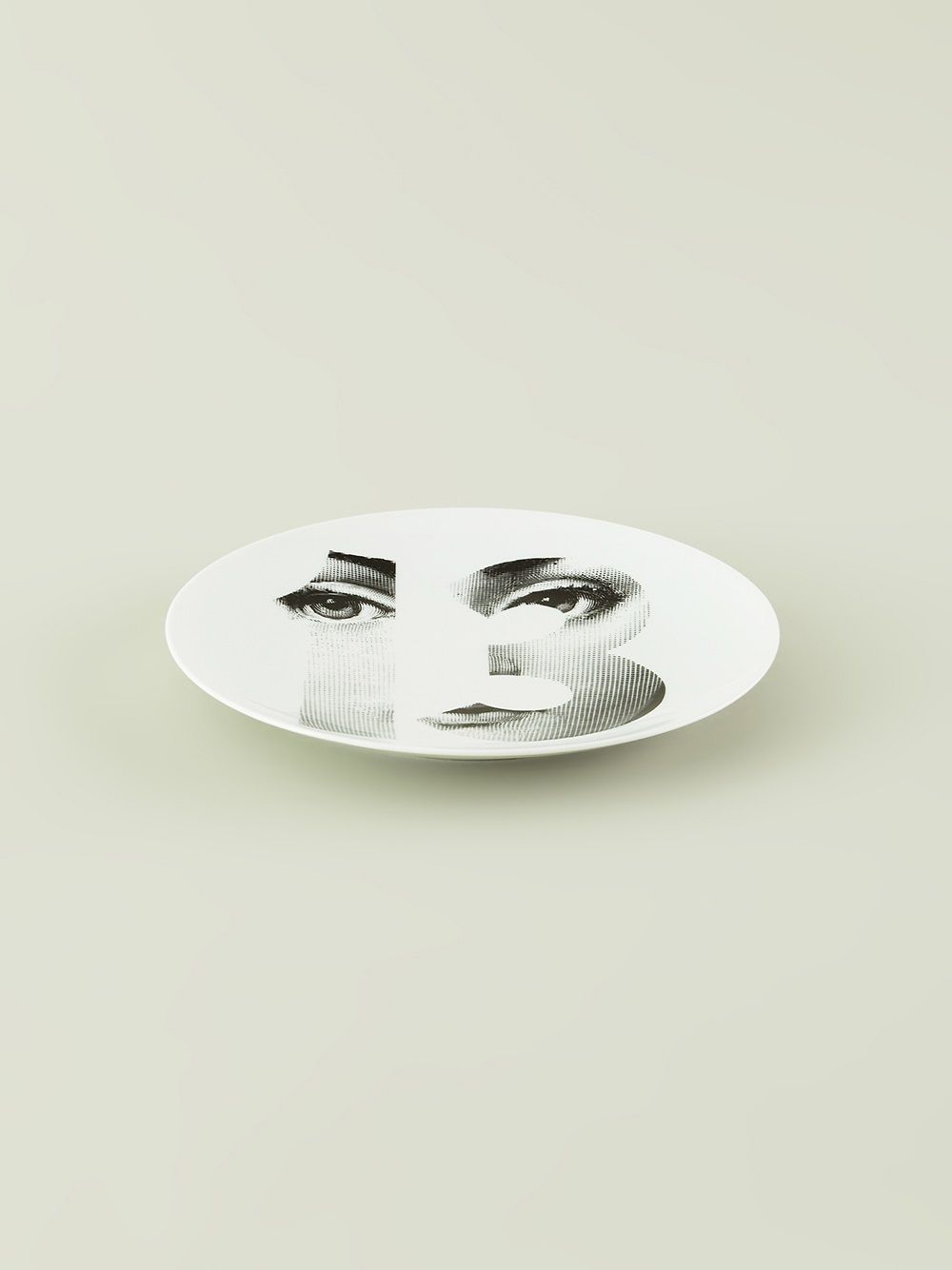 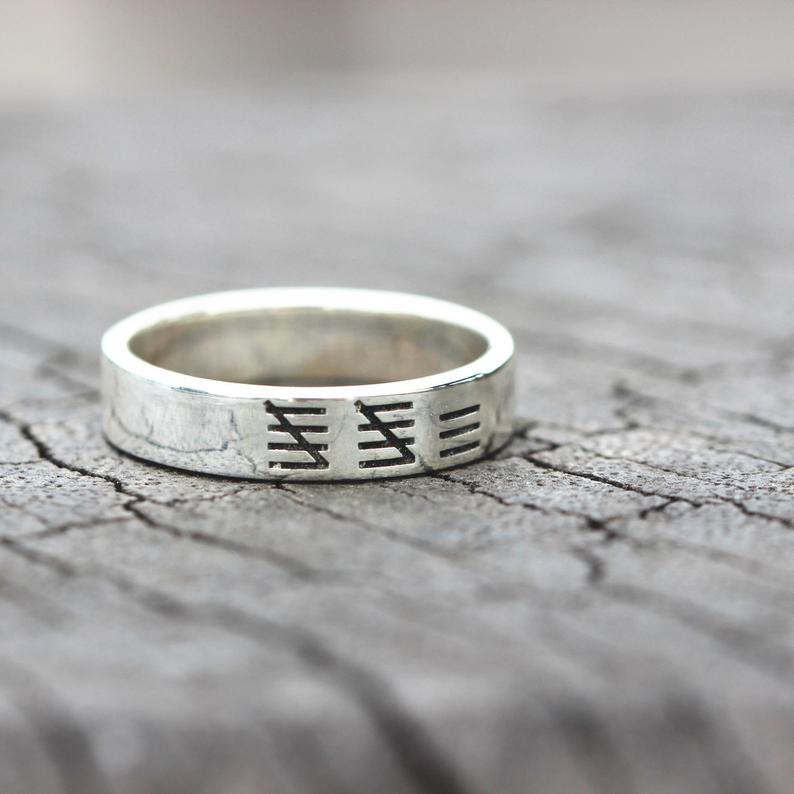 pamelahattie
Sterling Silver Lucky 13 Patch Ring
$20.80$26.00
Etsy
At Refinery29, we’re here to help you navigate this overwhelming world of stuff. All of our market picks are independently selected and curated by the editorial team. If you buy something we link to on our site, Refinery29 may earn commission.
Lingerie
Sevigne Has The Comfy Under-$80 Lingerie You’ll Actually Re...
Valentine’s Day calls for flowers, sweet treats, and show-stopping lingerie sets. Yet, after V-Day ends, we might still be relishing in chocolates an
by Vivien Lee
Deals
Abercrombie & Fitch Has All Its Iconic Jeans 25% Off
by Mercedes Viera
Most Wanted
Yes, Ethically Made & Affordable Fine Jewelry Does Exist
Timeless, luxurious, sustainable. These characteristics usually go with high price points and unattainability. But luxury brand Quince is challenging the n
by Victoria Montalti
Advertisement
Spring Fashion Guide
Dear Frances’ New Collection Has The Shoes That Just Might Be You...
If Cinderella found her glass shoe on the palace steps, I found mine within Dear Frances‘ Pre-Spring Summer 2023 Collection. I first discovered the
by Vivien Lee
Most Wanted
This Last-Minute Jewelry Sale Is A Treasure Trove Of Unforgettabl...
Searching for a new and unique jewelry brand is like a treasure hunt. But when you finally stumble on one like NAiiA, it’s a reward. Perusing the Los Ang
by Victoria Montalti
Deals
The 36 Best Early Presidents Day Sales You Can Shop Right Now
While February barely just started, it’s never too early to prepare for what, among the shopping cognoscenti, is a true sales holiday for the books.
by Mercedes Viera
Handbags
The Boho Leather Bag That Hundreds Of Reviewers Call “Perfect”
Does the perfect handbag exist? It’s a question that we find ourselves asking quite often as shopping experts, especially when fashion month rolls ar
by Amanda Randone
Shopping
Everlane’s New Drop Is Dressy, Wrinkle-Resistant, & Machine...
We’re very much guilty of describing Everlane as a source for effortless, elevated basics (granted, which the brand is!) — but its latest collectio
by Jinnie Lee
The Sell Out
Lululemon’s Fan-Fave Belt Bag Is Back In Stock After Sellin...
You never want something until you can’t have it. On The Sell-Out, we’re getting the scoop from your favorite retailers on what’s se
by Karina Hoshikawa
Most Wanted
A Guide To The Best Petite Jeans For Short Legs
As a person who stands at 5’3″, I understand firsthand the struggle of finding a solid pair of jeans that doesn’t need further alteration
by Jinnie Lee
Jumpsuits
The 10 Best Jumpsuits That Satisfy A One-And-Done Kind Of Day
by Jinnie Lee
Deals
Aesthetic Travelers, Rejoice! Steamline Luggage Is Offering Up To...
Suitcases are, more often than not, a necessary evil at best. Sure, they store our clothes and the souvenirs we’ve made the misguided choice to bring hom
by Sarah Crow
Advertisement
Advertisement
Discover
R29 Stories & News
Watch
R29 Original Series & Films
Shop
R29's Most Wanted