Skip navigation!
Story from Fashion
Photo: Courtesy of Bottega Veneta.
Bottega Veneta fall 2022.
The concept of a capsule closet — a wardrobe made up of a versatile collection of basics like black T-shirts, white button-downs, and little black dresses — is nothing new in fashion. But this year, a new wardrobe essential is leading the pack and, in the process, turning from a trusty staple to a fashion summer must-have: the white tank top.
In one of the most talked-about fall 2022 runway moments, Prada showed an assortment of white tank tops embellished with the house’s triangle logo on models like Kaia Gerber and Hunter Schafer. Then, there was Bottega Veneta, which transformed the ribbed white tank top into leather versions, and Acne, which gave the sleeveless piece the high-fashion treatment with oversized trousers.
Advertisement
Today, you would be hard-pressed to find the Loewe white tank top from the spring 2022 collection, as the item has quickly become the It top for the season.
While the humble tank top has never truly left the fashion trend cycle, amid the return of Y2K fashion and the rise of genderless fashion, the versatile staple is experiencing a centerstage moment. Celebrities like Kendall Jenner, Kim Kardashian, and Vanessa Hudgens have all been spotted recently wearing white tank tops, paired with '90s-inspired mom jeans and cargo pants; Bella Hadid has styled the basic tank with everything from knitted shrugs to off-the-shoulder tops.
“[The white tank top] is so classic. It's timeless,” says Mark-Evan Blackman, assistant professor of fashion design at the Fashion Institute of Technology. “[Today’s] designers have used the item as a backdrop to bring forth their vision in a very contemporary time.”
Photo: Courtesy of Acne.
Acne fall 2022.
Photo: Courtesy of Chloé.
Chloé fall 2022.
To back up, the first white tank top was designed in the 1910s as a men's undergarment, meant to be worn underneath shirts and while swimming. Between the 1920s and 1940s, the white tank top started to be worn as outerwear during World War I and II, when, according to Blackman, men “got in the habit of wearing undergarments as clothes.” Still, until 1934, the tank top was “never seen in public,” according to Blackman; the first time the article of clothing became visible to the masses — in a scene in It Happened One Night in which actor Clark Gable took off his shirt to reveal a white tank top underneath — “audiences were scandalized, but sales skyrocketed.”
Advertisement 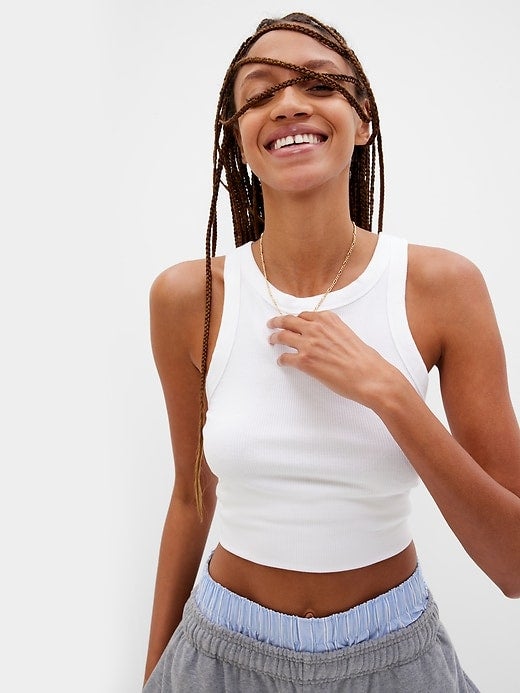 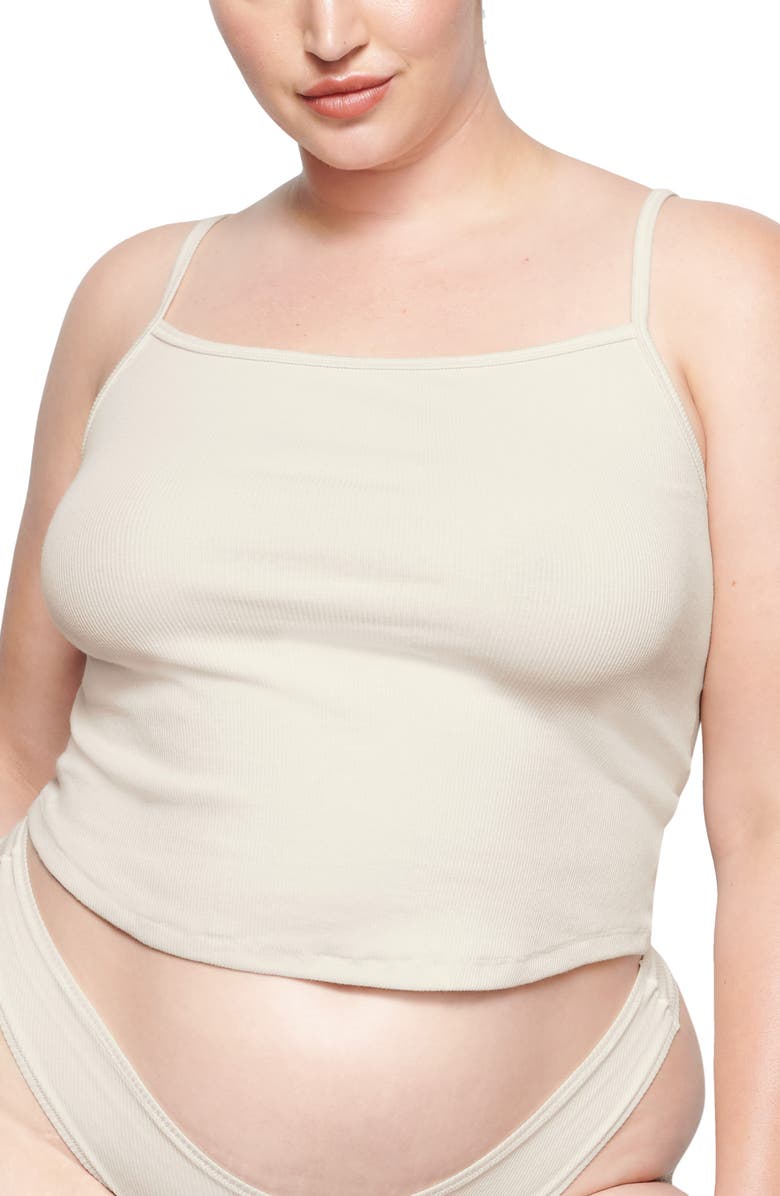 Skims
Cotton Rib Camisole
$34.00
Nordstrom
Fifteen years later, the white tank top had become a common item in men’s closets, on and off the screen. “Male Hollywood icons, like Marlon Brando and James Dean, were wearing them, and they were being embraced by the public,” he says. (These media depictions also gave rise to the controversial term “wifebeater,” due to the fact that the item was often shown in scenes where men physically abused their wives.)
Given the history, Blackman finds designer fashion’s recent interest in the utilitarian piece of white fabric ironic; while you can still find affordable versions of the look in big-box stores, it’s not unusual to find $300 styles in high-end retailers. “People who are wearing them fashionably now are still referencing something that is 70 years old,” he says.
The contemporary popularity of the white tank top reached a new level during the '90s and early 2000s hip-hop era, and embraced by women thanks supermodel Kate Moss’ off-duty looks which often included white tank tops, paired with denim skirts and minimalist trousers. (The latter inspired designer Calvin Klein to feature the model wearing the item in the brand’s ads.) The white tank top further solidified its place in the '00s pop culture lexicon when it appeared on the covers of many of the era’s album covers, music videos, and red carpet looks. Take, for example, Beyoncé, who wore a halter-neck version in the “Crazy In Love” video in 2003, and Jennifer Lopez, who donned a cropped bedazzled iteration at the 2000 MTV Video Music Awards.
Advertisement
In 2022, the prioritization of comfort over style could be one of the main reasons why brands and designers have embraced the white tank top as a must-have. “People are willing to buy them for tremendous comfort,” Blackman says. On the runway, the item appeared alongside equally casual pairings that deepened the collective desire for effortless fashion, as we step out of our pandemic cocoons.
Following two years of sartorial uncertainty, during which we stored away our fancy heels and party dresses, the white tank top trend has remained a constant, one that’s evolved to service its wearer, no matter the circumstances (or budget).
“It’s a contemporary statement piece,” says Blackman.
Denim
These Top Jean Trends Are The Stuff Of Denim Dreams
Fashion icon Diana Vreeland once famously said: “Blue jeans are the most beautiful things since the gondola.” You certainly don’t need to
by Amanda Randone
Best Wedding Dresses
6 Bridal Fashion Trends That Will Be Everywhere In 2023
This year, wedding fashion will take a turn for the glamorous. As evidenced by the New York Bridal Fashion Week Fall 2023 lineup, casual slip dresses and m
by Frances Solá-Sant...
Fashion
7 Shoe Trends To Up Your Footwear Game In 2023
If your New Year’s resolution is to treat your wardrobe to a seasonally appropriate update, the best place to start is from the bottom. Solid style choic
by Amanda Randone
Advertisement
Fashion
6 Fashion Trends That Will Take Over 2023 — Shop Them Now
Four months after the new runway collections made a case for all we should expect in the new year, the 2023 fashion trends have started making their way in
by Irina Grechko
Fashion
8 Jewelry Trends That Will Ensure You Shine Bright In 2023
If your outfits aren’t making you smile, it might be time to update your accessories collection. At least that’s what Shopbop fashion director
by Amanda Randone
Engagement Rings
7 Engagement Ring Trends That Will Be Big In 2023, According to E...
Unlike popular runway styles, engagement ring trends tend to move on a slower, subtler track (there’s not a wedding ring equivalent of a butterfly top or
by Nicole Kliest
Fashion
7 Handbag Trends To Tote Around In 2023
While a new year doesn’t necessarily need to mean a new you, it could mean it’s time for a new handbag. This essential piece of your next arm p
by Amanda Randone
Coats
Scarf Jackets Are Winter’s Most Viral Coat Trend
HeatTech leggings, turtleneck, North Face jacket, scarf, beanie. That’s the winter essentials lineup I return to again and again when bundling up for the
by Aemilia Madden
Fashion
Mood Jewelry Is Back — & All Grown-Up
Some of my earliest memories of experimenting with personal style include acquiring a sizable collection of mood rings. Most were run-of-the-mill versions
by Shelby Ying Hyde
Fashion
5 Style Aesthetics That Will Take Over Fashion In 2023
The concept of fashion aesthetics is nothing new to the trend forecasting industry. Seasonal style stories that often pop off on social media platforms lik
by Kendall Becker
Fashion
How To Style Cowboy Boots For Winter — According To R29 Editors
Following the year-long reign of platform heels, there’s a new shoe trend that’s set to steal the spotlight this winter: cowboy boots. Having f
by Irina Grechko
Fashion
12 Must-Have Winter Essentials, According To Fashion Insiders
Every season, a new selection of soon-to-be bestsellers hits our favorite fashion retailers. With so many winter 2023 trends and products to keep
by Irina Grechko
Advertisement
Advertisement
Discover
R29 Stories & News
Watch
R29 Original Series & Films
Shop
R29's Most Wanted