Skip navigation!
Story from Fashion
The concept of a capsule wardrobe — a closet made up of a versatile collection of clothing basics like black T-shirts, white button-downs, and little black dresses — is nothing new in fashion. But this year, a new wardrobe essential is leading the pack and, in the process, turning from a trusty staple to a fashion summer must-have: the white tank top.
In one of the most talked-about northern hemisphere autumn/winter 2022 runway moments, Prada showed an assortment of white tank tops embellished with the house’s triangle logo on models like Kaia Gerber and Hunter Schafer. Then, there was Bottega Veneta, which transformed the ribbed white tank top into leather versions, and Acne, which gave the sleeveless piece the high-fashion treatment with oversized trousers.
Advertisement
Today, you would be hard-pressed to find the Loewe white tank top from the spring 2022 collection, as the item has quickly become the It top for the season. 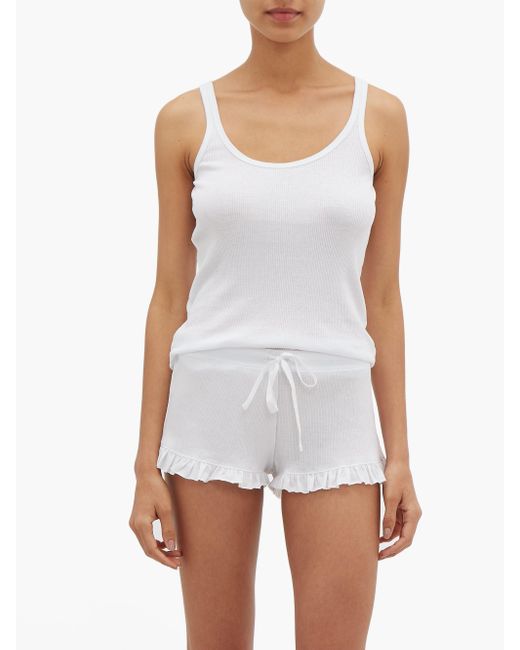 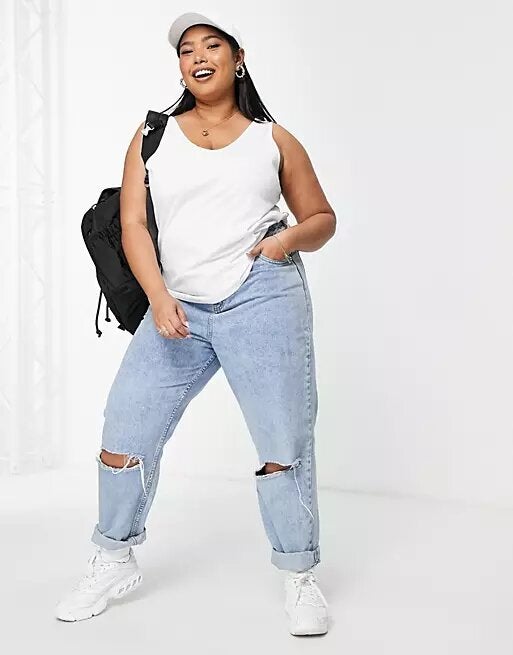 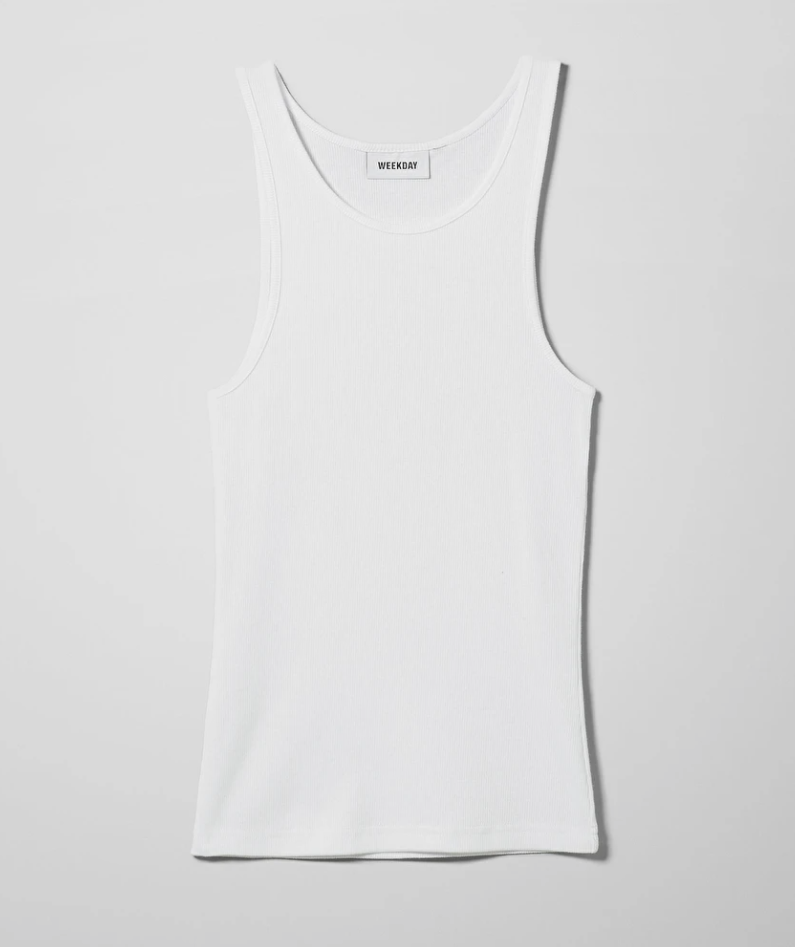 Weekday
Stella Tank Top
£8.00
Weekday
While the humble tank top has never truly left the fashion trend cycle, amid the return of Y2K fashion and the rise of genderless fashion, the versatile staple is experiencing a centerstage moment. Celebrities like Kendall Jenner, Kim Kardashian, and Vanessa Hudgens have all been spotted recently wearing white tank tops, paired with '90s-inspired mom jeans and cargo pants; Bella Hadid has styled the basic tank with everything from knitted shrugs to off-the-shoulder tops.
“[The white tank top] is so classic. It's timeless,” says Mark-Evan Blackman, assistant professor of fashion design at the Fashion Institute of Technology in New York. “[Today’s] designers have used the item as a backdrop to bring forth their vision in a very contemporary time.” 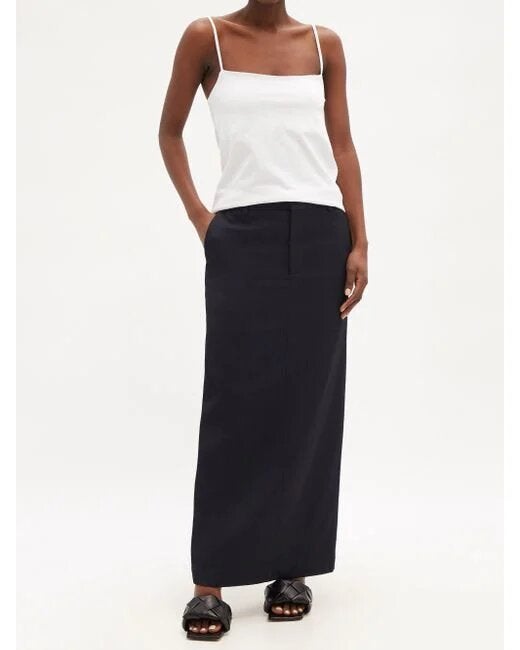 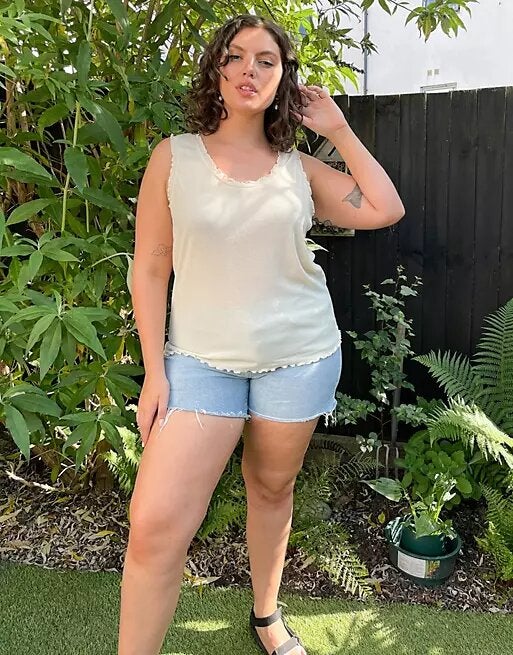 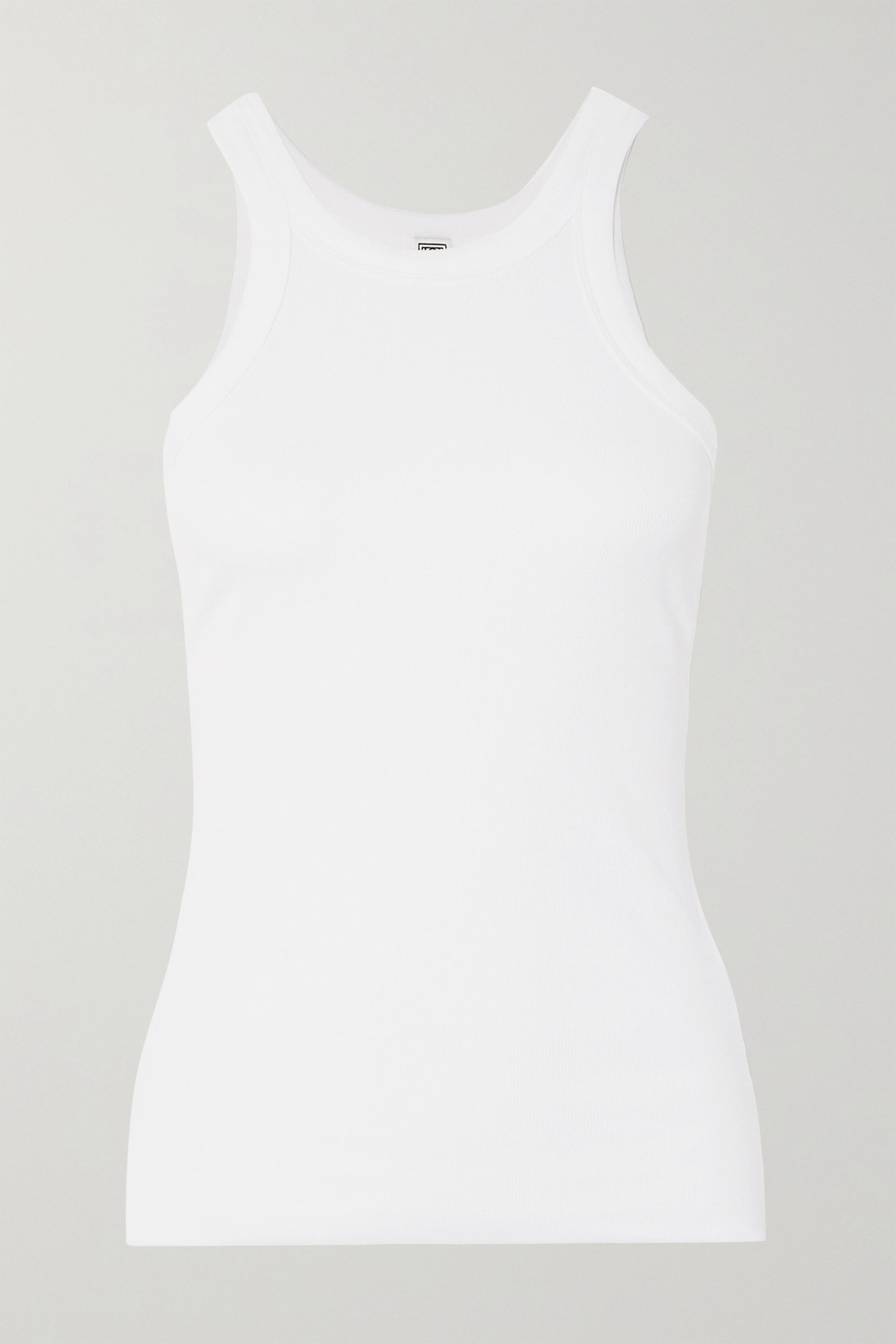 Toteme
Organic Cotton-jersey Tank
£85.00
Net-A-Porter
Photo: Courtesy of Acne.
Acne fall 2022.
To back up, the first white tank top was designed in the 1910s as a men's undergarment, meant to be worn underneath shirts and while swimming. Between the 1920s and 1940s, the white tank top started to be worn as outerwear during World War I and II, when, according to Blackman, men “got in the habit of wearing undergarments as clothes.” Still, until 1934, the tank top was “never seen in public,” according to Blackman; the first time the article of clothing became visible to the masses — in a scene in It Happened One Night in which actor Clark Gable took off his shirt to reveal a white tank top underneath — “audiences were scandalised, but sales skyrocketed.”
Advertisement
Fifteen years later, the white tank top had become a common item in men’s closets, on and off the screen. “Male Hollywood icons, like Marlon Brando and James Dean, were wearing them, and they were being embraced by the public,” he says. (These media depictions also gave rise to the controversial term “wifebeater,” due to the fact that the item was often shown in scenes where men physically abused their wives.) 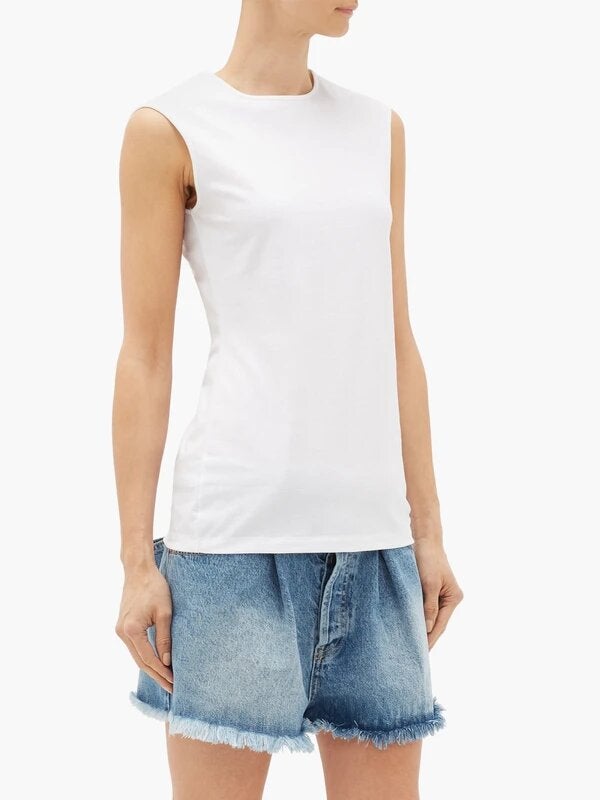 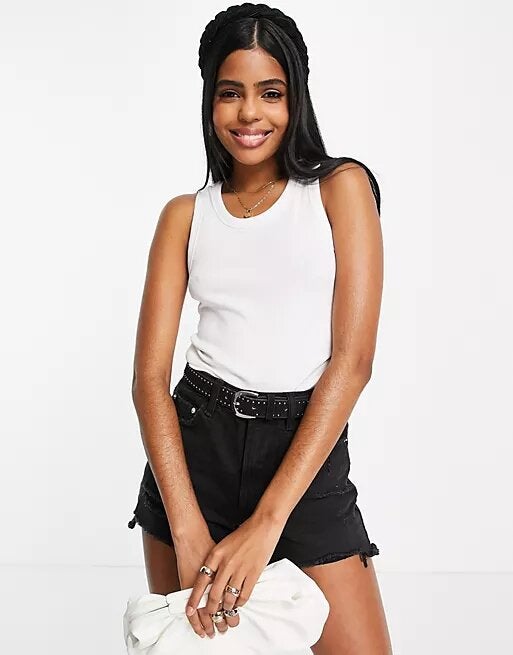 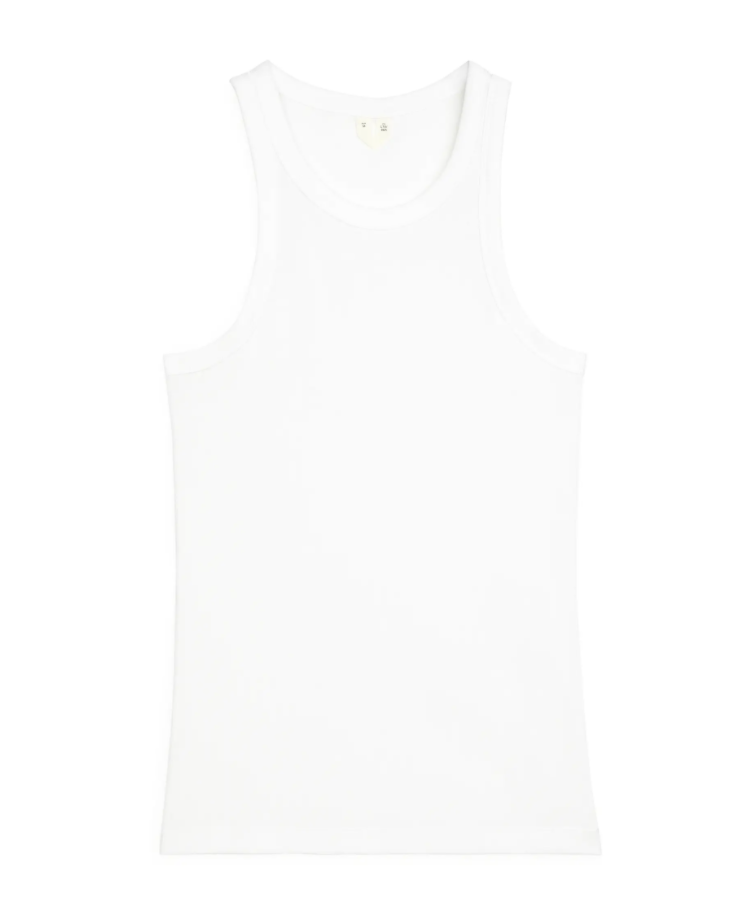 Arket
Ribbed Racer Tank
£17.00
Arket
Given the history, Blackman finds designer fashion’s recent interest in the utilitarian piece of white fabric ironic; while you can still find affordable versions of the look in big-box stores, it’s not unusual to find £300 styles in high-end retailers. “People who are wearing them fashionably now are still referencing something that is 70 years old,” he says.
The contemporary popularity of the white tank top reached a new level during the '90s and early 2000s hip-hop era, and embraced by women thanks supermodel Kate Moss’ off-duty looks which often included white tank tops, paired with denim skirts and minimalist trousers. (The latter inspired designer Calvin Klein to feature the model wearing the item in the brand’s ads.) The white tank top further solidified its place in the '00s pop culture lexicon when it appeared on the covers of many of the era’s album covers, music videos, and red carpet looks. Take, for example, Beyoncé, who wore a halter-neck version in the “Crazy In Love” video in 2003, and Jennifer Lopez, who donned a cropped bedazzled iteration at the 2000 MTV Video Music Awards.
Advertisement 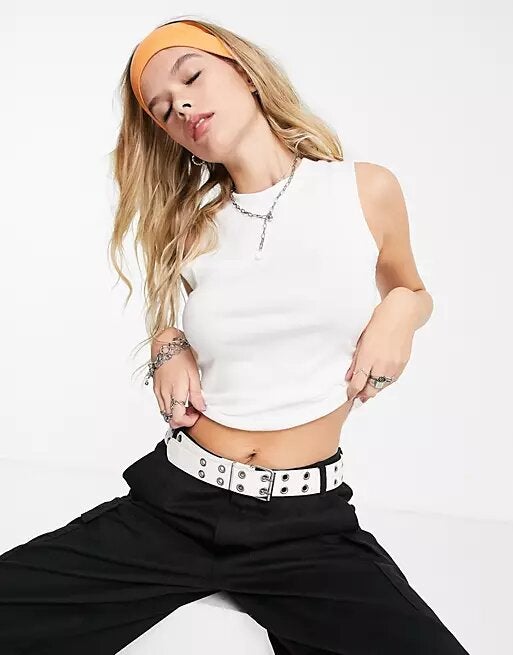 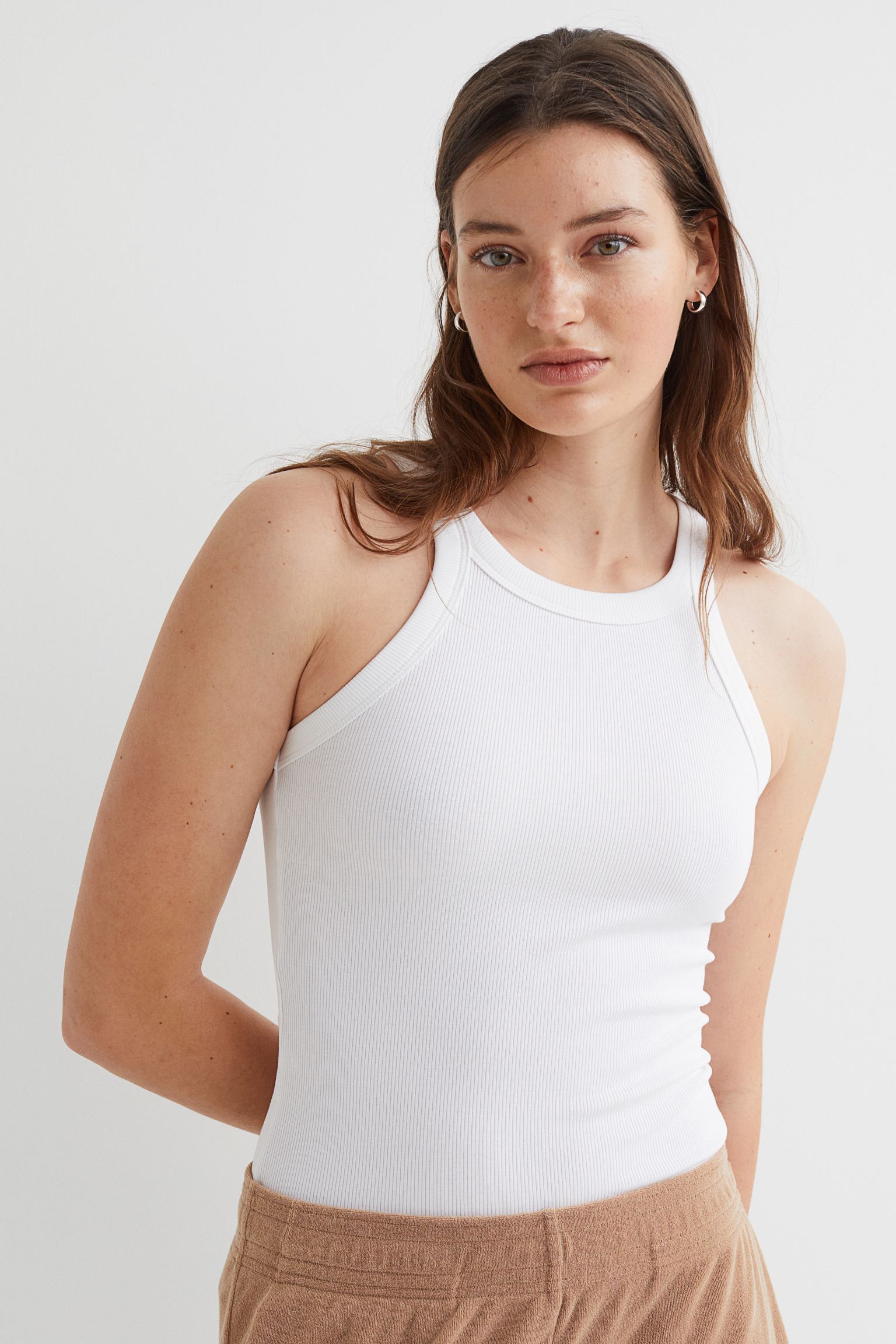 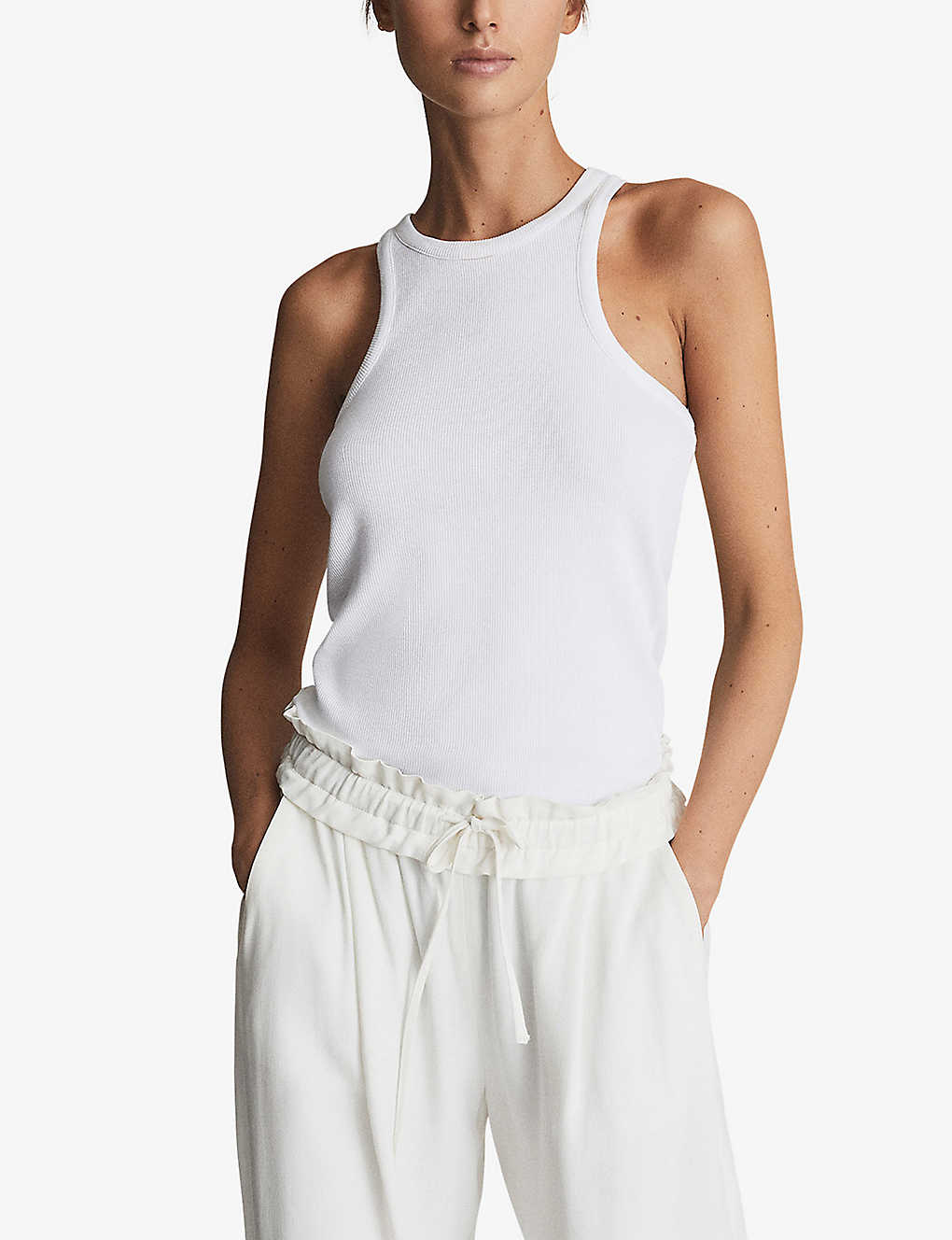 Reiss
Mirabel Sleeveless Stretch-woven Tank Top
£35.00
Selfridges
In 2022, the prioritisation of comfort over style could be one of the main reasons brands and designers have embraced the white tank top as a must-have. “People are willing to buy them for tremendous comfort,” Blackman says. On the runway, the item appeared alongside equally casual pairings that deepened the collective desire for effortless fashion, as we step out of our pandemic cocoons.
Following two years of sartorial uncertainty, during which we stored away our fancy heels and party dresses, the white tank top trend has remained a constant, one that’s evolved to service its wearer, no matter the circumstances (or budget).
“It’s a contemporary statement piece,” says Blackman.
At Refinery29, we’re here to help you navigate this overwhelming world of stuff. All of our market picks are independently selected and curated by the editorial team. All product details reflect the price and availability at the time of publication. If you buy or click on something we link to on our site, Refinery29 may earn commission.
Fashion
How The White Tank Top Became 2022’s Biggest Fashion Statement
The concept of a capsule wardrobe — a closet made up of a versatile collection of clothing basics like black T-shirts, white button-downs, and little bla
by Frances Solá-Sant...
Fashion
How To Style Your Cowboy Boots, The Hottest Footwear Of The Summer
by Alicia Lansom
Fashion
Peeking Boxers Are Coming For Your Low-Rise Jeans
Last year, as the fashion world time-traveled to the early 2000s, visible thongs, also known as whale tails, started popping up everywhere from street styl
by Frances Solá-Sant...
Advertisement
Fashion
The Bodiless Jumper Trend Makes No Sense & I Love It
There are some trends that feel utterly alien until you see them enough times and suddenly they make sense. This happens all over the worlds of fashion and
by Sadhbh O'Sullivan
Best Wedding Dresses
The Latest Bridal Trends Include Embellished Veils & Balloon Skirts
Welcome to Aisle Style, a week-long series that features the most untraditional wedding fashion trends, coolest bridal designers to know, and brides who wa
by Frances Solá-Sant...
Fashion
Peplum — The Trend Everyone Loves To Hate — Is Back & Better Than...
Last Sunday, Nicole Kidman stepped on the 2022 Oscars red carpet, wearing a custom Armani Privé gown that featured one of 2010s defining trends: peplum. B
by Frances Solá-Sant...
Fashion
So How Is It Really? Wearing The Micro Mini Skirt Trend IRL
Thanks to brands like Miaou and Miu Miu, the micro mini skirt is one of the defining trends of 2022. Ever since the Y2K trend appeared on the spring 2022 r
by Frances Solá-Sant...
Fashion
Bold Orange Is Spring’s Most Saturated — & Must-Try — Colour Trend
Dopamine dressing — “happy fashion” made up of bright colours, statement prints, and party-inspired silhouettes — has been one of 2022’s biggest
by Frances Solá-Sant...
Fashion
So, How’s It Really: I Traversed The Earth In Moon Boots Fo...
Refinery29’s selection is purely editorial and independently chosen – we only feature items we love! As part of our business model we do work with
by Alexandra Polk
Engagement Rings
7 Engagement Ring Trends That Will Be Big This Spring, According ...
Pairing the notion of a fashion trend with something as long-lasting as an engagement ring might seem counterintuitive: the former is usually thought of as
by Nicole Kliest
Fashion
Opera Gloves Are Everywhere But Do They Work IRL? I Found Out
In the last year it’s been hard to look at a red carpet without spotting a certain swanky accessory on everybody’s arms. From Gigi Hadid at the Met
by Alicia Lansom
Fashion
How’s It Really? I Wore Catsuits For A Week
Welcome to Refinery29’s So, How Is It Really? where we take a look at all of the topics that have the internet talking. In studying them up close, we ans
by Frances Solá-Sant...
Advertisement
Advertisement