Skip navigation!
Story from Fashion
Photo: courtesy of Mirror Palais.
In Season 4, Episode 18 of the popular ‘90s television show Friends, Jennifer Aniston’s always stylish character, Rachel Green, unexpectedly meets her boyfriend’s parents wearing a lace-trimmed negligee intended for an intimate date night at home. She then spends the evening trying to pass her undergarments off as the “next big thing in fashion.” She wasn’t exactly wrong. Two decades later, donning lingerie-as-outerwear is not only quite common but it’s encouraged. Slip dresses have become a year-round style staple, while corsets, bustier tops, and girdle skirts make their rounds among the style set. Now, thanks to the industry’s penchant for nostalgia, there’s a new intimates-inspired trend on the docket that’s set to be everywhere in the next six months: bloomers.
Advertisement
Hear us out. Yes, in a literal sense, the blousy bottoms could feel a bit dated. With early origins in Asia and Turkey, they served as an essential part of the Western ensembles in the early 19th century, worn underneath caged skirts. It wasn’t until the American Suffrage Movement, when women began trading their long dresses for bloomer pants (that got their name from women's rights advocate Amelia Bloomer) in protest, that the item appeared in public. Today, fashion brands continue to put their own spin on the top-drawer style.
Oscar de la Renta presented a romantic pink satin pair in his spring 2001 collection, while just last month Alessandro Michele sent a lime-colored micro mini pair down Gucci’s Cosmogonie runway with a faux fur cape and leather motorcycle gloves. Then there was the billowy knee-length pair that made an appearance in Louis Vuitton’s Cruise 2023 lineup just days before. Nensi Dojaka’s sheer biker-short pair have a more updated feel while Anna Sui revived her retro boudoir silhouettes from the ‘90s with a pair of loose-fitting slip shorts, offering the best of both lingerie-inspired trends for the new season.
Photo: Leon Bennett/WireImage.
Louis Vuitton
Photo: Daniele Venturelli/Getty Images.
Gucci Cosmogonie
Off the catwalk, the style has proven to be just as popular. Indie label with a cult following thanks to its viral Fairy Dress, Mirror Palais debuted an iteration with a distinct vintage feel for Spring 2022. Complete with flouted hemlines and ribbon details, the lightweight poplin pair has all the key characteristics of traditional pairs — without any of the outdated feel.
Advertisement
“Fashion history is something that I’m very invested in, and it informs how I design,” Marcelo Gaia, founder of the buzzy label, says. “So making the decision to show a 19th-century pantalette in this collection felt very natural. The pair that I designed is just a remake of an authentic vintage pair of [bloomers,] and we didn’t complicate it any further. We kept it very pure and almost, like, historically accurate. But we really made it feel modern with the styling.”
To accomplish that, the designer sourced through Toots Vintage while asking himself, How would Carrie Bradshaw wear 19th-century undergarments? The answer? With heels, of course. “It’s the kind of piece that evokes fantasy and makes people feel like they’ve been transported through time,” he explains on the overwhelming response from his customer base since the style’s release. “It’s exciting to see how [customers] are going to reinterpret fashion from the last hundred years.” 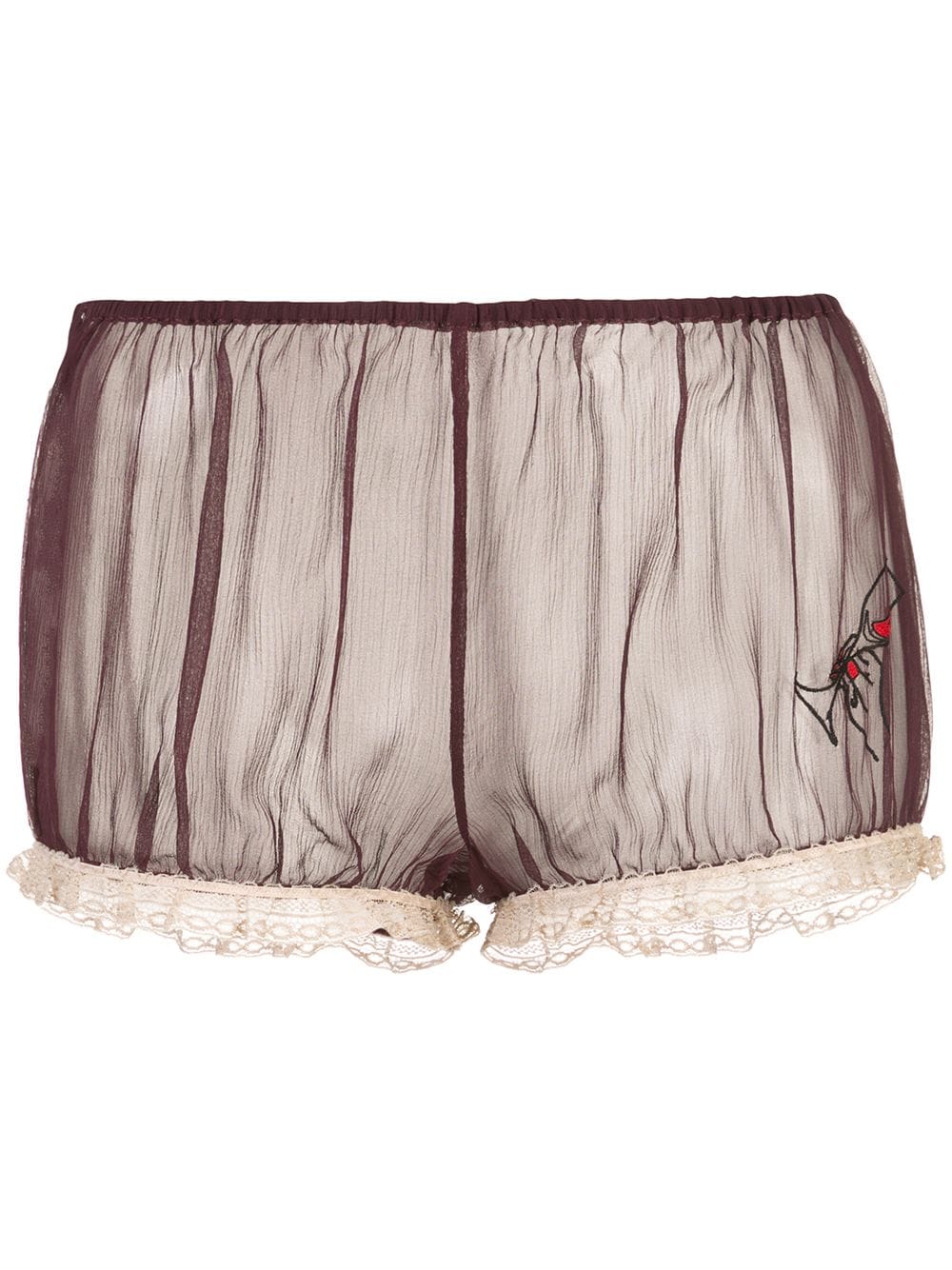 Mirror Palais
Pantalette In White Cotton
$395.00
Mirror Palais
For most luxury lingerie brands, vintage silhouettes live at the core of their brand DNA. Years ago Kiki de Montparnasse teamed up with Caroline Vreeland on a collection of sheer silk-embroidered bloomers, while the likes of Fleur du Mal and Agent Provocateur have produced some versions of the style over the years, many of which have a more bedroom feel but could still be worn as ready-to-wear with the right accompaniments.
“Nowadays, there’s very little that hasn’t been done before in the lingerie world,” Sarah Shotton, creative director of Agent Provocateur, says. “Looking back at lingerie styles past and spinning them on their head and moving it forward in a modern way is always very exciting for my team and me. I particularly love deconstruction and looking at the beauty of the craftsmanship of vintage or antique pieces.”
Advertisement 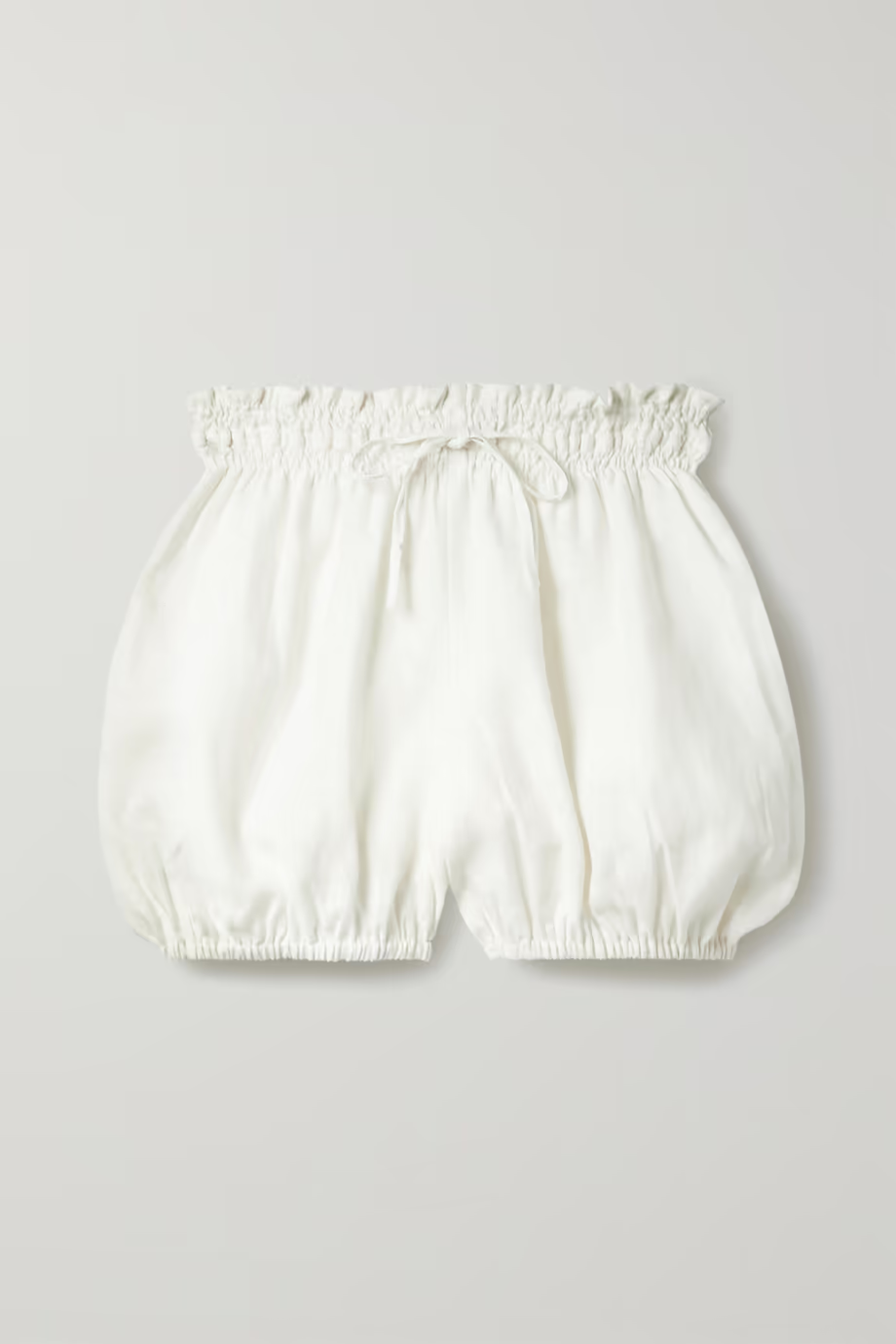 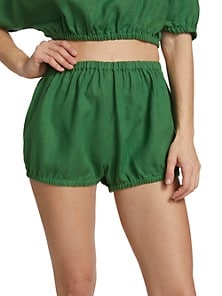 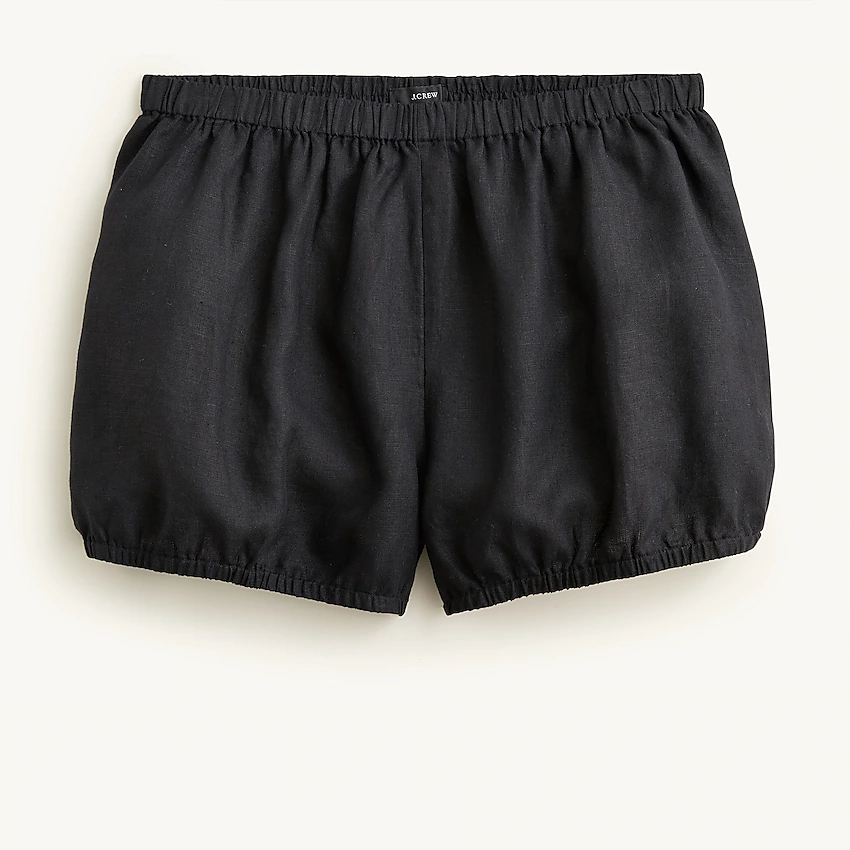 J.Crew
Bloomer Short In Linen
$49.50$69.50
J.Crew
According to Gaia and Shotton, the secret to pulling off the look today is to pay attention to proportions and fabrics. “Find bloomers with a fitted waist, floaty around the bottom and then nipped back in with a frill around the top of the thigh. For a more modern look, try French knickers and tap pants which look great with a corset or a cami top — they keep the spirit of the original bloomers but with an up-to-date attitude,” says Shotton. “Luxurious fabrics like silk or a light tulle help keep things comfy and make you feel fabulous.”
But ultimately, like with any retro fad, Gaia urges shoppers to go the secondhand route, whenever possible. “As a brand, we are big supporters of [buying] vintage, and we tell our customers that if our pieces are out of your price range but you want to embrace a micro trend and they have your size, I would encourage you to check out Etsy or Depop as alternatives.”
If you aren’t ready to wear lingerie in public, Shotton suggests wearing the style under a tailored suit jacket or with a classic white shirt: “Fresh white cotton looks great over bloomers, with a pretty bra peeking through, but it doesn’t feel too extreme,” she says. “Make it look intentional, and you’ll be able to carry it off.”
shop 4 products 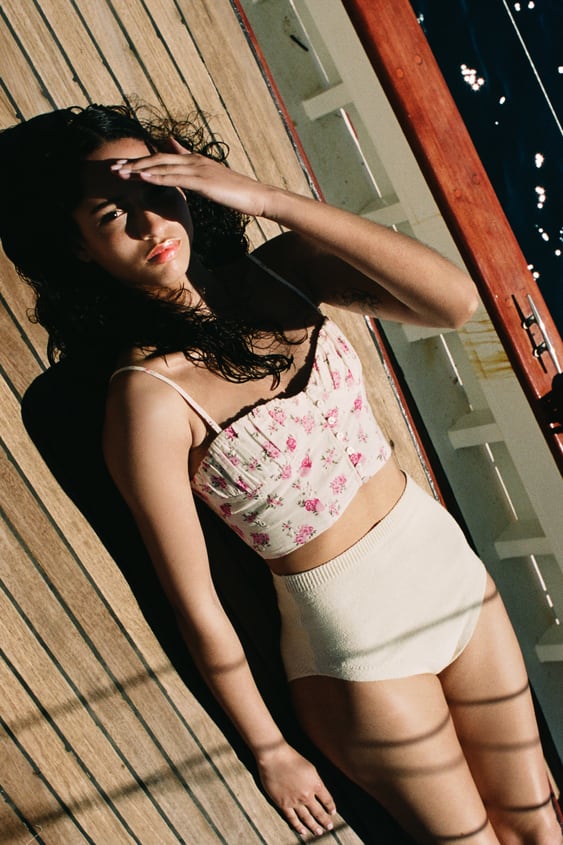 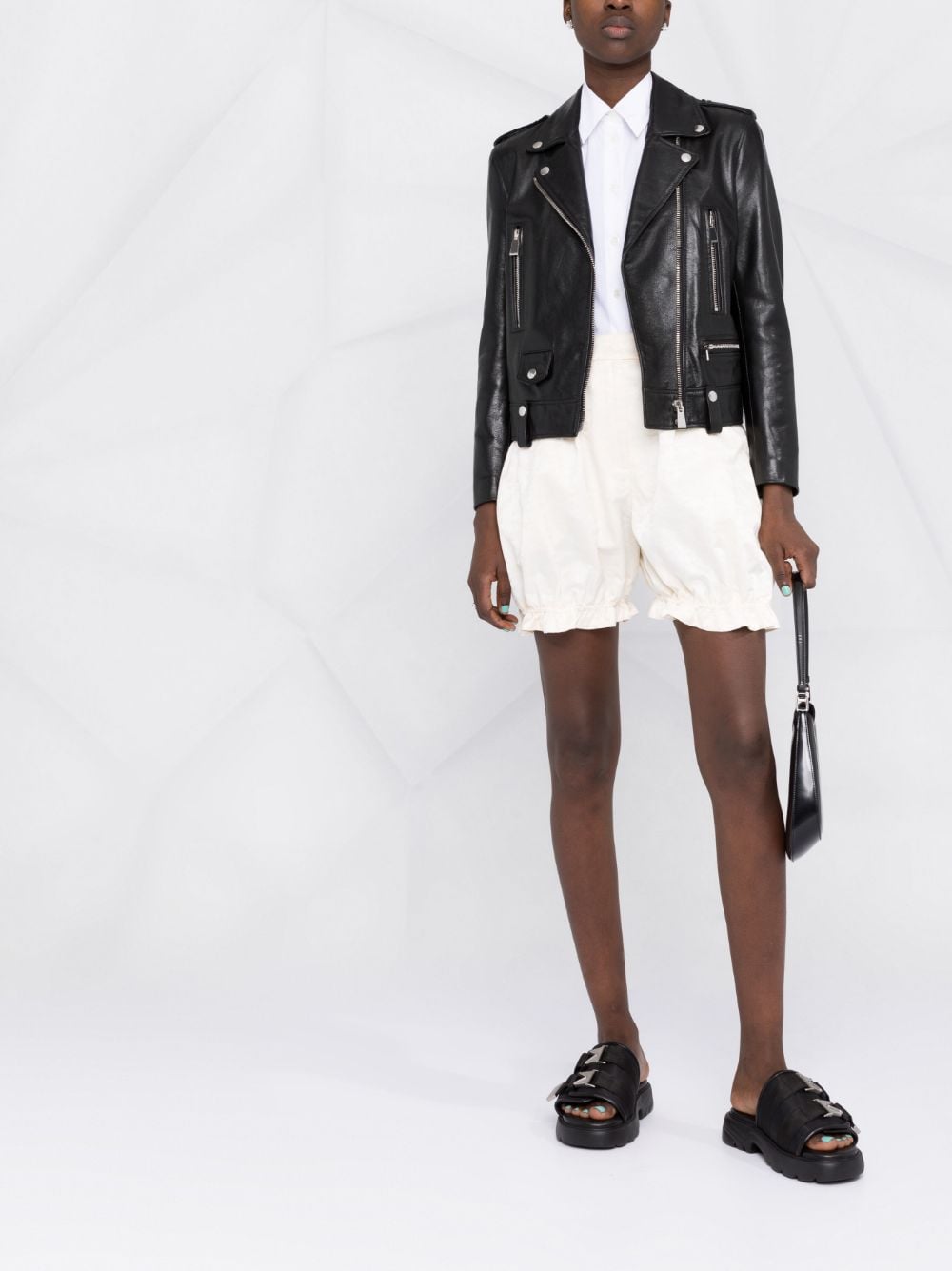 Anna October
Black Melody Shorts
$128.00$320.00
SSENSE
At Refinery29, we’re here to help you navigate this overwhelming world of stuff. All of our market picks are independently selected and curated by the editorial team. If you buy something we link to on our site, Refinery29 may earn commission.
Style
How Bratz Dolls Became Fashion’s Biggest Style Muses
From chunky boots to micro-mini skirts — if today's top trends look familiar, you probably saw them on a Bratz doll first.
by Eliza Huber
Fashion
Tube Dresses Are The Comeback Style Trending This Summer
From Kate Moss-approved slip midis and puckered popcorn dresses to tube minis, the late-‘90s and early-‘00s were full of memorable frock styles. The la
by Sandra Okerulu
Fashion
Aura Photo-Inspired Prints Are Summer’s Most Alluring Trend
Getting dressed isn’t usually considered to be a spiritual activity. When you’re running late for work, you just want to make sure your underwear is on
by Aemilia Madden
Advertisement
Fashion
Farmers Market-Inspired Fashion Is This Summer’s Most Optim...
The first time I rolled out of bed on a sunny Saturday morning and strolled my way down to my local Brooklyn farmers market, I was in for a rude surprise.
by Aemilia Madden
Checking out
Headgear Is The Secret To A Perfect Outfit
by Simone Oliver
Fashion
The 7 Biggest Swimwear Trends, According To A Trend Forecaster
by Kendall Becker
Fashion
How To Wear Bloomers, This Season’s Lingerie-Inspired — & Grandma...
In Season 4, Episode 18 of the popular ‘90s television show Friends, Jennifer Aniston’s always stylish character, Rachel Green, unexpectedly meets her
by Shelby Ying Hyde
Fashion
Behold The Latest Handbag Trend: Drawstring Bags
by Ray Lowe
Fashion
These Fashion Trends Are Defining 2022 — Here’s How To Shop...
by Laura Lajiness Ka...
Fashion
What’s Really Behind TikTok’s “Weird Girl Aesthetic”
Last month, creator @kaiageber chronicled in a Twitter thread a new aesthetic emerging in street style: the “weird” girl. Using photos of influencers a
by Frances Solá-Sant...
Fashion
11 Summer Fashion Trends That Are The Definition Of Dopamine Dres...
by Irina Grechko
Fashion
Body Jewelry Dressing Is 2022’s Answer To Naked Fashion Trend
In time for warm weather, fashion has signaled that it’s time to bare it all, with the most popular trends of the summer ranging from party dresses to mi
by Frances Solá-Sant...
Advertisement
Advertisement
Discover
R29 Stories & News
Watch
R29 Original Series & Films
Shop
R29's Most Wanted