Skip navigation!
Story from Color Trends
Tanya Taylor's eponymous womenswear collection is known for its un-shy juxtaposition of brilliant tones, based on prints hand-painted in the designer’s studio every season. Earlier this year, the designer fittingly contacted Pantone about a collaboration — which has finally come to fruition in the form of vibrantly hued t-shirts adorned with the company's trademark sans-serif logo, proprietary color name, and code: Tanya Taylor x Pantone Color Therapy Capsule. The conversation between the designer and the color agency started in January, but “when the pandemic hit,” explains Taylor, “the idea of emotion being tied to different hues [felt] so important.” The designer knew the uplifting feelings she wanted to convey, and the team at the Color Institute helped the designer isolate three options: PANTONE 15-2913 Lilac Chiffon for confidence, PANTONE 16-5721 Marine Green for calm, and PANTONE 18-3946 Baja Blue for creativity. “I always believe in the psychological impact of color,” explains Taylor. She was awed by the specificity and expertise of the Pantone team. Using Baja Blue as an example, the designer shares some specific rationale: “This blue has a little bit of red in it, which helps creativity — it’s not a flat blue. That’s what’s so special about working with [Pantone], is we feel as deeply about color [as they do]. It’s awesome to have that synergy.”
Advertisement
Photographed by Raquel Willis.
Taylor has seen firsthand the transformative emotional effect of color, thanks to a color painting class she’s conducted on the pediatric ward of Memorial Sloan-Kettering Cancer Center — a series that started in 2018 after the designer was tapped to redesign the exam-room curtains on the children’s floor. “It’s fun,” shares the designer. “[The kids] are like, half-listening, drawing stuff, but it’s really cool.” Taylor reveled in the opportunity to provide respite from the bleak reality of the hospital setting, helping the young artists “feel like kids again, and not patients.”
Photographed by Gray Benko.
As a nod to these efforts, the new Pantone collaboration will also benefit children. At the beginning of the pandemic, the designer — like scores of other independent brands in New York City — used a surplus of fabric from canceled retail orders to start making masks, and to date, they’ve produced over 200,000. Now, with the help of New York non-profit Fund For Public Schools, Taylor plans to use 20% of the sales from the capsule to manufacture and donate children’s masks to 100 schools throughout the five boroughs. (Taylor also added youth sizing to the t-shirt collaboration — her first foray into pint-sized apparel.) “I think kids are the most affected by [the pandemic],” explains the designer, “and if there’s anything we could do to give them a little bit more optimism, then we wanted to do that.”
The collection starts at $95 and is available in youth sizes XS-XL and adult sizes XS-3XL. In addition to the proceeds from the sale of the t-shirts, customers also have the option to add a mask donation to their orders. 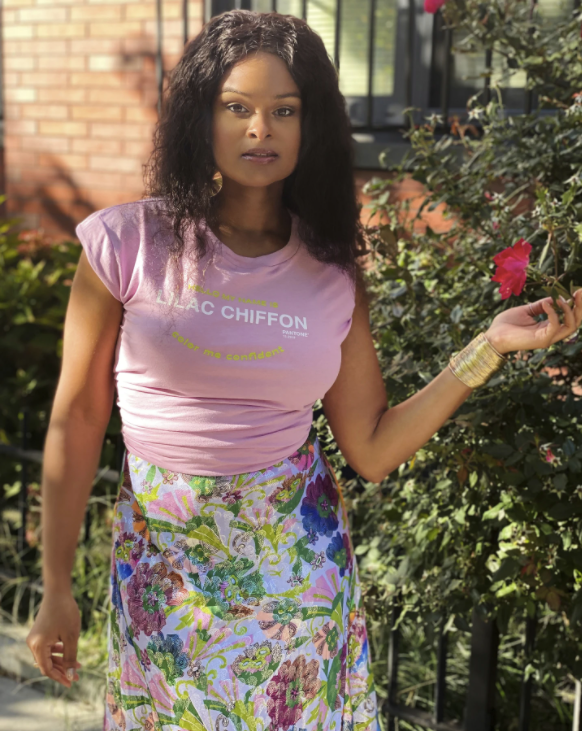 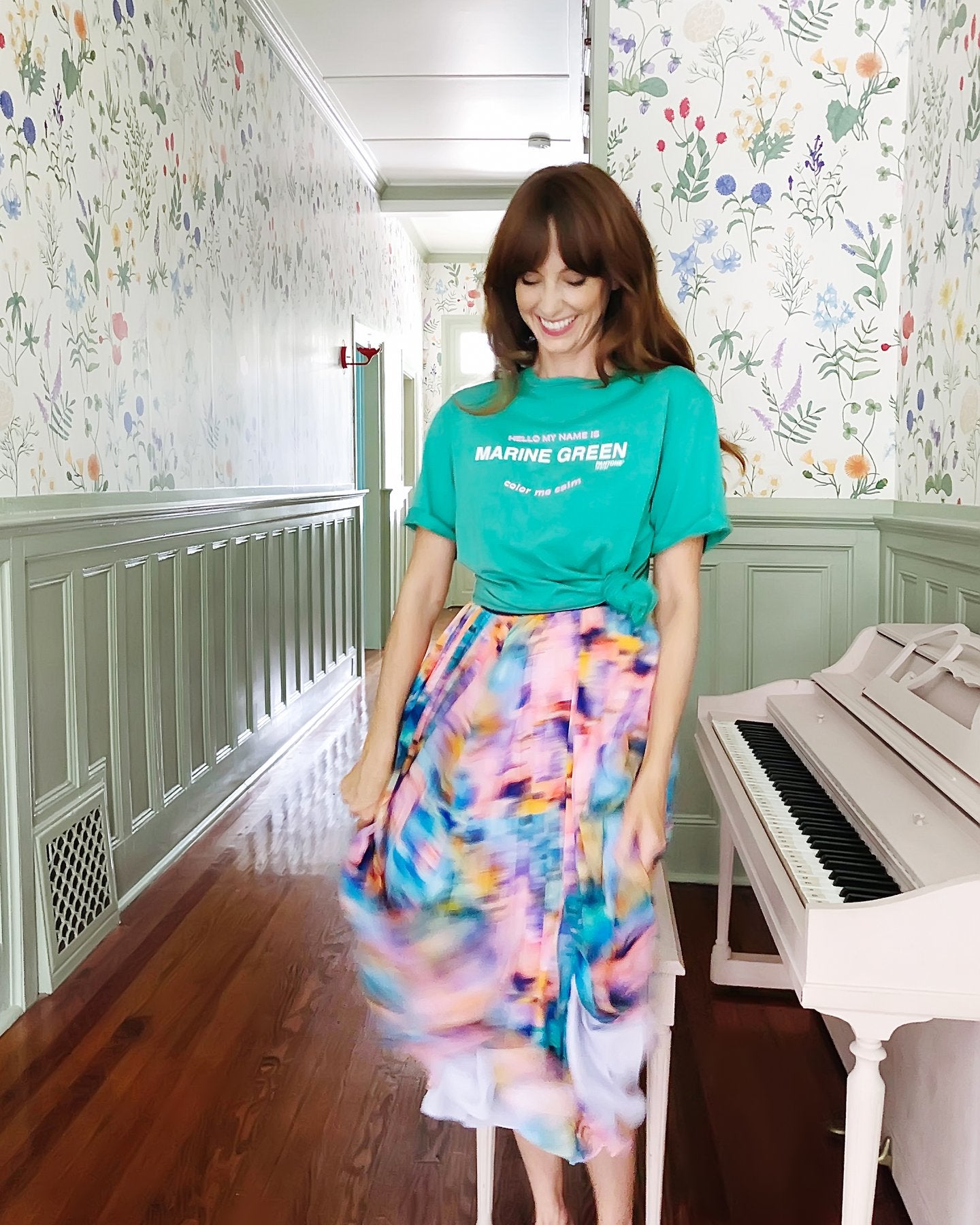 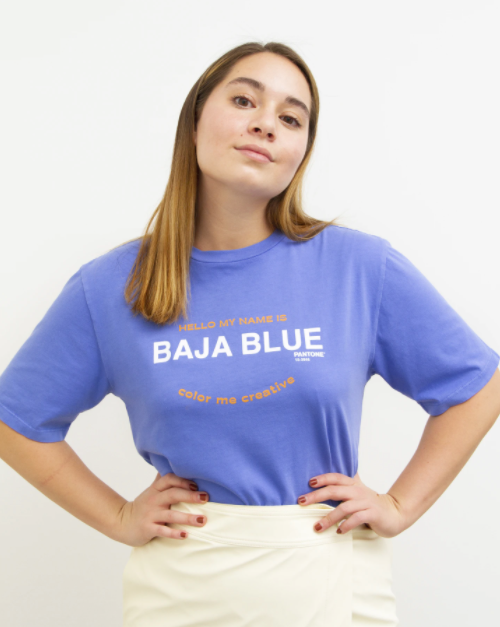 Tanya Taylor
Color Me Creative Adult Tee
$125.00
Tanya Taylor
At Refinery29, we’re here to help you navigate this overwhelming world of stuff. All of our market picks are independently selected and curated by the editorial team. If you buy something we link to on our site, Refinery29 may earn commission.
Lingerie
Sevigne Has The Comfy Under-$80 Lingerie You’ll Actually Re...
Valentine’s Day calls for flowers, sweet treats, and show-stopping lingerie sets. Yet, after V-Day ends, we might still be relishing in chocolates an
by Vivien Lee
Deals
Abercrombie & Fitch Has All Its Iconic Jeans 25% Off
by Mercedes Viera
Most Wanted
Yes, Ethically Made & Affordable Fine Jewelry Does Exist
Timeless, luxurious, sustainable. These characteristics usually go with high price points and unattainability. But luxury brand Quince is challenging the n
by Victoria Montalti
Advertisement
Spring Fashion Guide
Dear Frances’ New Collection Has The Shoes That Just Might Be You...
If Cinderella found her glass shoe on the palace steps, I found mine within Dear Frances‘ Pre-Spring Summer 2023 Collection. I first discovered the
by Vivien Lee
Most Wanted
This Last-Minute Jewelry Sale Is A Treasure Trove Of Unforgettabl...
Searching for a new and unique jewelry brand is like a treasure hunt. But when you finally stumble on one like NAiiA, it’s a reward. Perusing the Los Ang
by Victoria Montalti
Deals
The 36 Best Early Presidents Day Sales You Can Shop Right Now
While February barely just started, it’s never too early to prepare for what, among the shopping cognoscenti, is a true sales holiday for the books.
by Mercedes Viera
Handbags
The Boho Leather Bag That Hundreds Of Reviewers Call “Perfect”
Does the perfect handbag exist? It’s a question that we find ourselves asking quite often as shopping experts, especially when fashion month rolls ar
by Amanda Randone
Shopping
Everlane’s New Drop Is Dressy, Wrinkle-Resistant, & Machine...
We’re very much guilty of describing Everlane as a source for effortless, elevated basics (granted, which the brand is!) — but its latest collectio
by Jinnie Lee
The Sell Out
Lululemon’s Fan-Fave Belt Bag Is Back In Stock After Sellin...
You never want something until you can’t have it. On The Sell-Out, we’re getting the scoop from your favorite retailers on what’s se
by Karina Hoshikawa
Most Wanted
A Guide To The Best Petite Jeans For Short Legs
As a person who stands at 5’3″, I understand firsthand the struggle of finding a solid pair of jeans that doesn’t need further alteration
by Jinnie Lee
Jumpsuits
The 10 Best Jumpsuits That Satisfy A One-And-Done Kind Of Day
by Jinnie Lee
Deals
Aesthetic Travelers, Rejoice! Steamline Luggage Is Offering Up To...
Suitcases are, more often than not, a necessary evil at best. Sure, they store our clothes and the souvenirs we’ve made the misguided choice to bring hom
by Sarah Crow
Advertisement
Advertisement
Discover
R29 Stories & News
Watch
R29 Original Series & Films
Shop
R29's Most Wanted