Skip navigation!
Story from TikTok
It was a pretty average day when TikTok influencer Hannah Schlenker accompanied her mom and sister to an outlet mall in Gainesville, Georgia, to pick out an outfit for an upcoming sorority event at Six Flags. (“I needed leggings for that,” Schlenker explained that, “Obviously I need to look cute.”) It was at Aerie that she discovered the brand’s now-notorious OFFLINE Real Me High Waisted Crossover Legging. “I tried ’em on,” explains the Kennesaw State University freshman, “and I was like, ‘There is no way I am leaving without these.’” The midsection-snatching power of the layered waistline was evident, Schlenker explains; “I have big hips, but [the leggings] cross, so it makes you look smaller.”
Advertisement 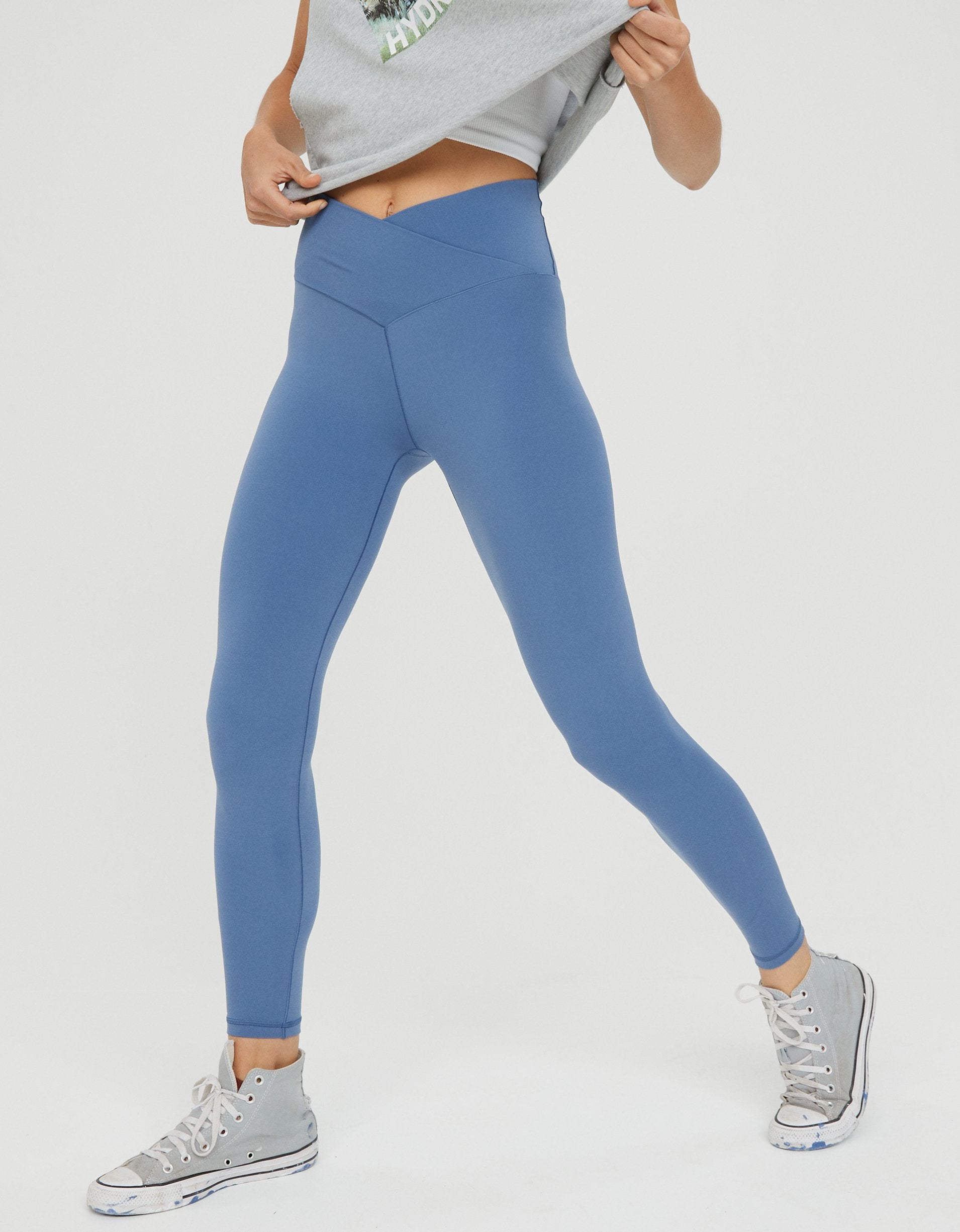 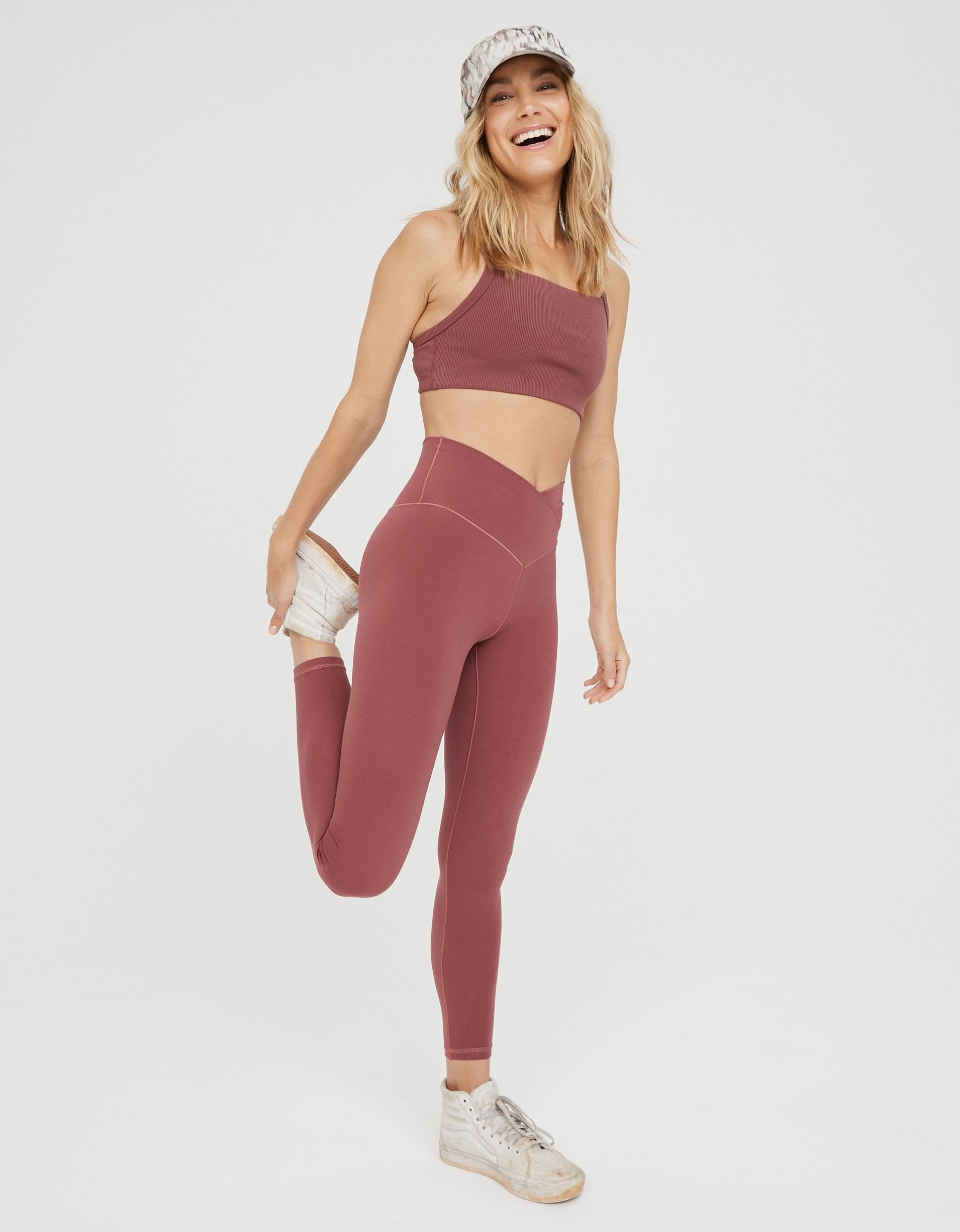 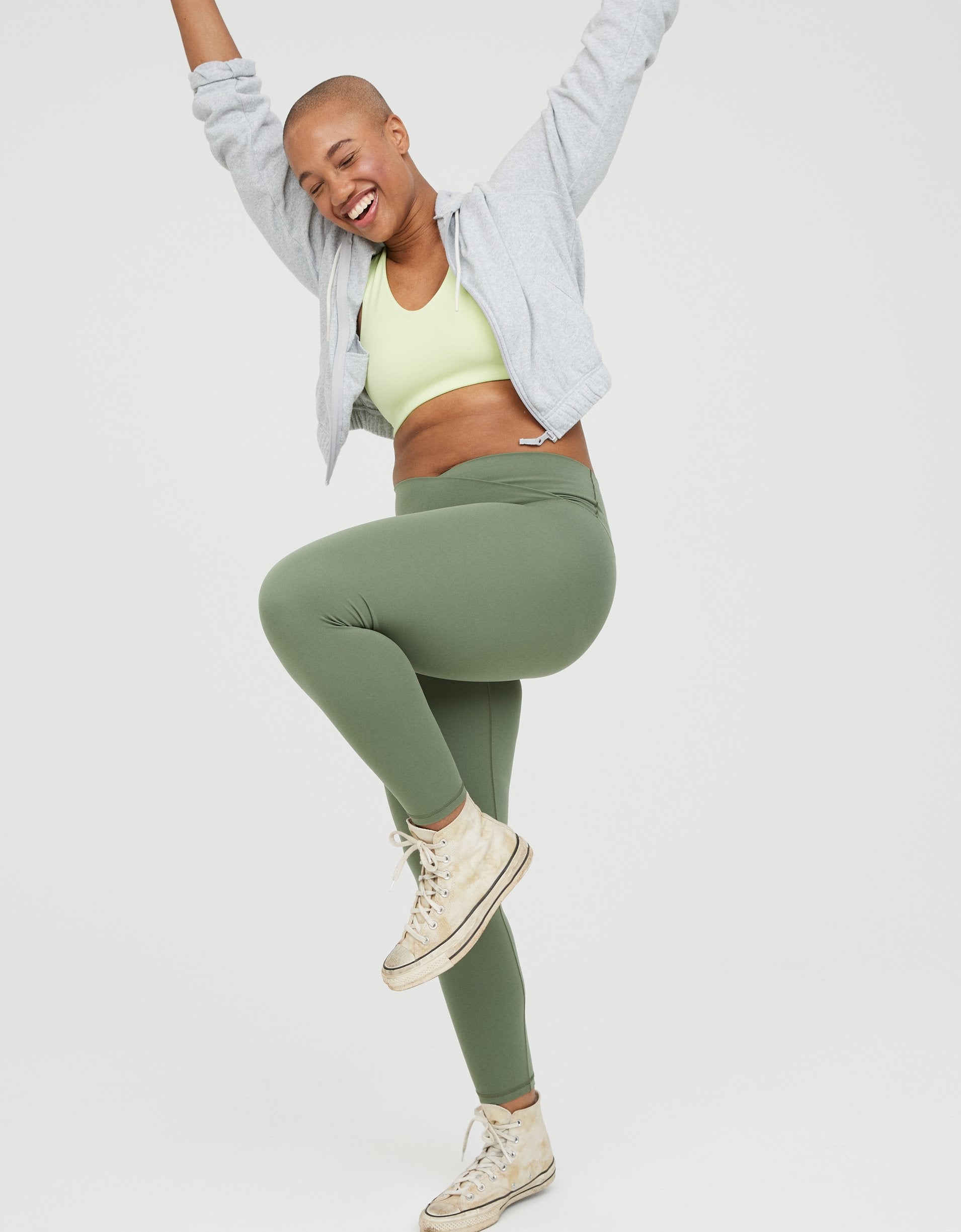 Aerie
Offline Real Me High Waisted Crossover Leg...
$44.95
AE
If Schlenker wasn’t the beneficiary of a TikTok following numbering over 860,000 (her twin sister, Hopie Schlenker, has a mere 1.5 million) the story may have ended there. However, when the creator shared her activewear acquisition with her followers, the leggings went from after-school mall haul to sought-after quarantine buy that sold out with viral ferocity. Schlenker still expresses amazement that the uber-casual video caught on: “My sister was like, ‘Are you going to post that? You’re not even doing anything.’” She believes it was her honesty about the silhouette that upped their universal appeal. “People started commenting about my body,” she explains, “I was like, ‘Dude, without these leggings, I would not look like this. Don’t believe everything you see on social media.’” (She normally doesn’t look at the comments on her posts “because people are so mean sometimes.”)
“

Dude, without these leggings, I would not look like this. Don’t believe everything you see on social media.

Hannah Schlenker, TikTok Influencer
”
Shop This
Aerie
Offline Real Me High Waisted Crossover Leg...
$44.95
AE
Now, six months and almost as many restocks of the original Crossover leggings later, Aerie has an entire shop devoted to v-waisted styles — including leggings, yoga flares, bike shorts, and swim bottoms. In addition, Schlenker has just been named OFFLINE by Aerie’s official “Crossover Curator,” — a tongue-in-cheek title that means we can expect a lot more #crossovercontent from the influencer in the coming weeks. Even better, the announcement of the partnership comes with the arrival of new colorways and silhouettes on Aerie’s Crossover Shop — including an olive green that Schlenker calls “her favorite color in the whole entire world” and the shade of periwinkle that she originally wore in her November video.
Advertisement
“

That’s why I like Aerie so much — they love everybody for who they are and they don’t retouch anything. I wish every brand would be that way.

HANNAH SCHLENKER, TIKTOK INFLUENCER
”
Shop This
Aerie
Real Me High Waisted Crossover Legging (so...
$44.95
AE
The partnership with Aerie is a long time coming for Schlenker — who grew up buying swimwear from the brand when it was contained to “just the back wall” at the American Eagle in the Mall of Georgia — and recognized the stark difference between the way Aerie chose their models and the portrayal from traditional retailers. (With the latter, “you’d see these skinny, slender girls; no cellulite, no blemishes, no stretch marks.”) She also recognizes that the supposed “realness” of social media can have a detrimental effect on the body image of young women, and appreciates Aerie’s focus on inclusive representation and body positivity. “It’s a pretty common thing for middle schoolers to look at themselves and compare themselves to all of these beautiful women on social media — when in reality they don’t look like that,” Schlenker explains. “That’s why I like Aerie so much — they love everybody for who they are and they don’t retouch anything. I wish every brand would be that way. Mental health would be so much better for these girls.”
At Refinery29, we’re here to help you navigate this overwhelming world of stuff. All of our market picks are independently selected and curated by the editorial team. If you buy something we link to on our site, Refinery29 may earn commission.
Fashion
If I Could Live In This Affordable Rainproof Puffer Coat, I Would
You’re reading an On-Site Shopping story — meaning you can browse, add to cart, and actually purchase the product recommendations featured be
by Venus Wong
Gift Guides
The Best Gifts For All The Shoe Lovers In Your Life
Do you have a shoe fanatic to shop for this holiday? Are you going back and forth between what to get them? Sneakers, heels, boots? The list seems to go on
by Vivien Lee
Gift Guides
23 Fashion Gifts That Only Look Expensive
For the fashion-lovers among us, the holidays (and gift-giving season that comes with it) offer an opportunity to lean into opulence. But, to be sure, R
by Jinnie Lee
Advertisement
Gifts For Mom
24 Unique Gifts That Your Picky Mom Won’t Banish To The Closet
by Emily Ruane
Most Wanted
19 Pawsome Gifts For Every Pet Parent On Your List
by Karina Hoshikawa
Winter Fashion Guide
Prep For The Frigid Temps With The Best Winter Gloves Out There
by Ellen Hoffman
Fashion
The Definitive Guide To The Best Holiday Gift Ideas For 2022
Take a deep breath. Crack those knuckles. Grab that pen and gift list. Because ’tis the season for holiday shopping. If you’re already feeling
by Jinnie Lee
Shopping
The 25 Cozy & Cute Slippers We’re Wearing Right Now
by Kate Spencer
Fashion
27 Gifts For The Woman Who Wants Nothing This Holiday Season
by Irina Grechko
Lingerie
Parade Is Celebrating Cyber Monday With Up to 50% Off Orders and ...
by Jinnie Lee
Sweaters
25 Elevated Cardigans That Definitely Aren’t Your Grandma’s
by Eliza Huber
Deals
15 Cyber Week Deals You Still Have Time To Shop
This year’s Cyber Week is the holiday gift that keeps on giving. Black Friday has come and gone and Cyber Monday might be almost over, but it isnR
by Lydia Wang
Advertisement
Advertisement
Discover
R29 Stories & News
Watch
R29 Original Series & Films
Shop
R29's Most Wanted