Skip navigation!
Story from Fashion
Photo: Ricky Vigil M/GC Images.
Kylie Jenner in Thiery Mugler.
If you have a sudden urge to join a motorcycle club right now, it’s not a coincidence. From the influence of Rosalía’s "Motomami" album to fashion trends on fall 2022 runways and a vintage shopping resurgence on TikTok, it’s clear that the adrenaline-infused, ultra-cool biker style is fast becoming a sought-after look. Vroom vroom!
It all started back in 2021, when Rosalía was seen donning a biking helmet as a handbag on the streets of SoHo, hinting that her then-anticipated album would be centered around this aesthetic. Later, designers jumped on the style too: Dior showed models in protective gear and bicep-grazing motocross gloves over flowy dresses; Balmain featured biker-style denim jackets, as well as vests and pants that looked more like safety gear than high fashion; and Junya Watanabe, Givenchy, and Alexander McQueen put heavy-zippered leather jackets and leather leggings on the runway.
Advertisement
Photo: Gotham/GC Images.
Bella Hadid wearing a Yamaha logo jacket.
While motocross has long been an influence in fashion, this season, the inspiration is more concrete, with celebrities like Bella Hadid, Hailey Bieber, and Emily Ratajkowski dressing like they’re off to the races. And it’s all about the jackets: Back in May, Hadid stepped out in New York wearing a yellow racing jacket with the Yamaha logo, while Bieber sported a vintage red biking jacket paired with parachute pants. Kylie Jenner also endorsed the trend, wearing a vintage Thierry Mugler padded jacket with a denim mini skirt. Beyoncé also took on the style with her British Vogue spread, in which she posed on a motorcycle, wearing head-to-toe leather from Junya Watanabe and Commando.
Photo: Courtesy of Dior.
Dior fall 2022.
Photo: Courtesy of Dior.
Dior fall 2022.
It's no coincidence celebs have relied on jackets to show off their moto style. According to real-life, Illinois-based biker Amelia Costello, it's a must-have for any motorcycle outing. “You want something that's going to possibly save your life if you are going down. So you want something that's really durable,” Costello, who has been riding for three years, says.
Ahead, Costello dishes on what are the best qualities for a moto jacket, when you’re looking to match your on-the-street style to a biker’s on-the-run uniform this fall.

Even if you’re not actually hopping on a bike on the weekends, a good quality material like leather will most likely be the best option to keep you warm and stylish. “Leather is durable and it's stronger,” says Costello, who says that a high quality leather is less likely to rip open in an accident. So, if it withstands a motorcycle fall, it’ll last a lot longer in great condition. Take a cue from Kylie Jenner’s fit, going for a vintage jacket that will add a worn feel to your look.
Advertisement
Photo: Mariano Regidor/Redferns.
Rosalía wearing custom Dion Lee.

Fit Is Better Than Oversized

Oversized jackets may be a stylish (and comfy look), but when it comes to mimicking the style of a real-life biker, Costello says that a fitted jacket is better. “You don't want it to be loose because it’ll be flapping in the wind and that gets annoying,” she says. Chances are your fitted biker jacket will also be a good choice when wind gusts ramp up during the fall.
Photo: Courtesy of Alexander McQueen.
Alexander McQueen fall 2022.

Adhere To The Dress Code

If you were a biker, you’d likely join a motorcycling association, like the Latin American Motorcycling Association (LAMA), of which Costello is a part of. “Most biker crews have a dress code,” she says, adding that it usually consists of a black shirt, jeans, and a biker jacket or vest. While it’s tempting to pair a moto jacket with a skirt or dress, Costello says that real biker style sticks to a no-skirts policy. “I find myself not being able to dress up as often as they used to,” she says. “I'd rather be on my bike than wear a dress.”
If the trend intimidates you, Costello says it’s best to have a rider’s mindset, even if no bike is available: “Everyone drops their bike. Just get up and brush it off and keep going.”
At Refinery29, we’re here to help you navigate this overwhelming world of stuff. All of our market picks are independently selected and curated by the editorial team. If you buy something we link to on our site, Refinery29 may earn commission.
shop 5 products 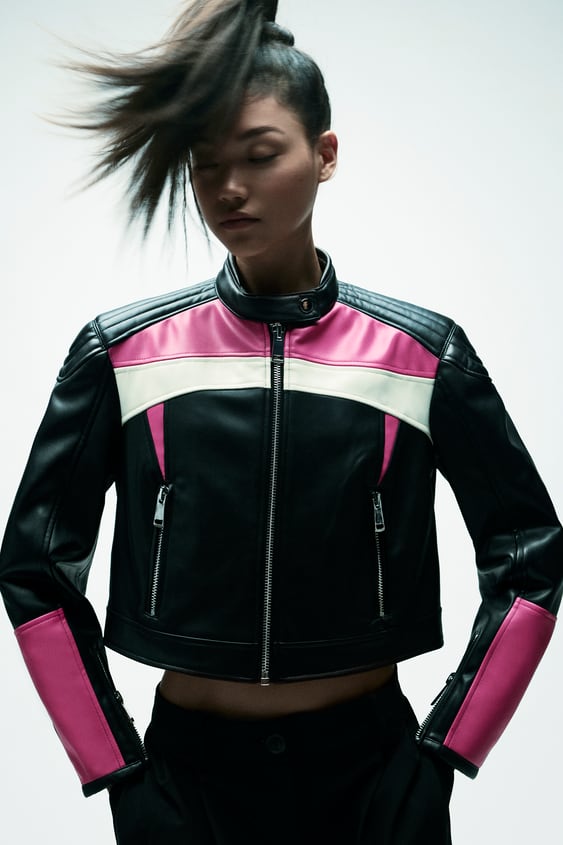 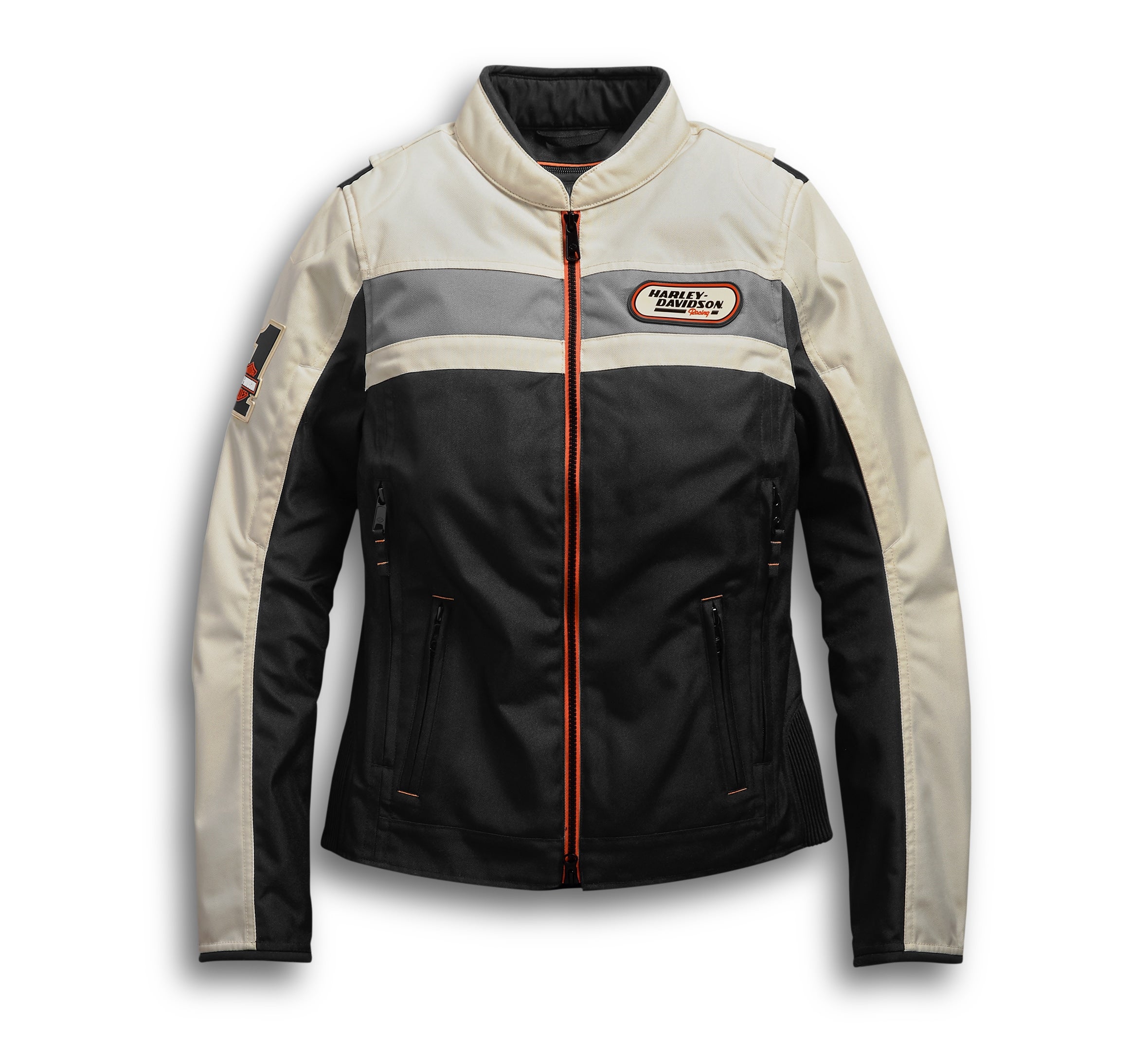 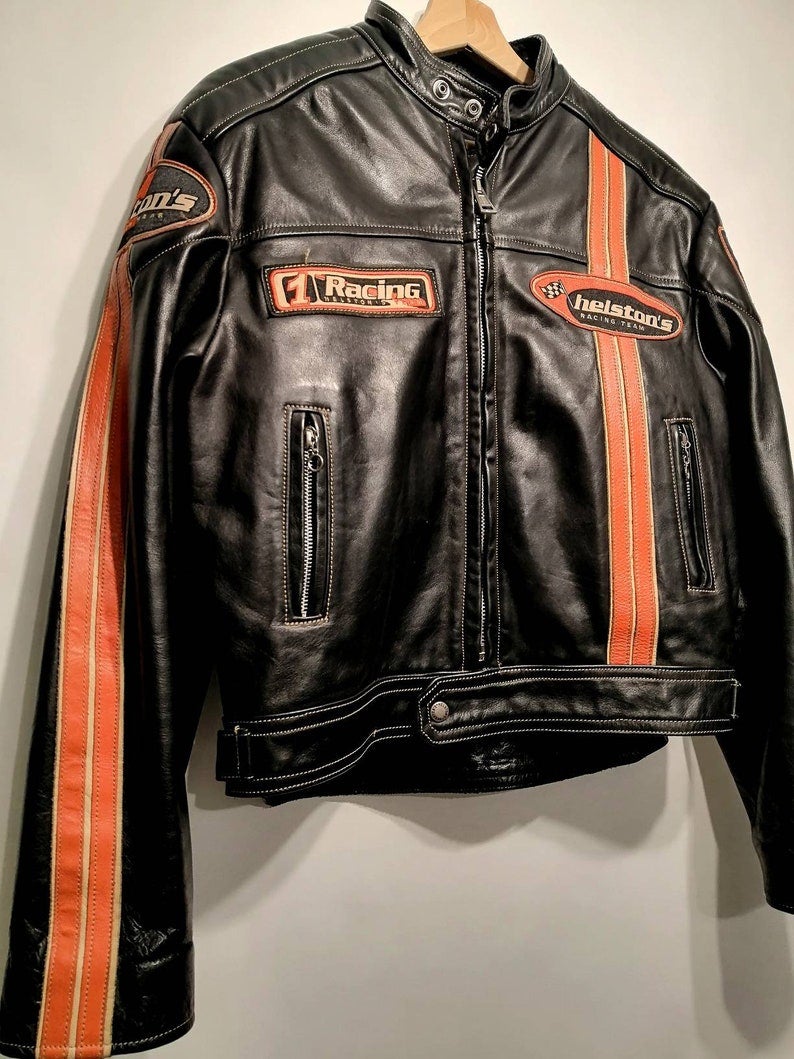 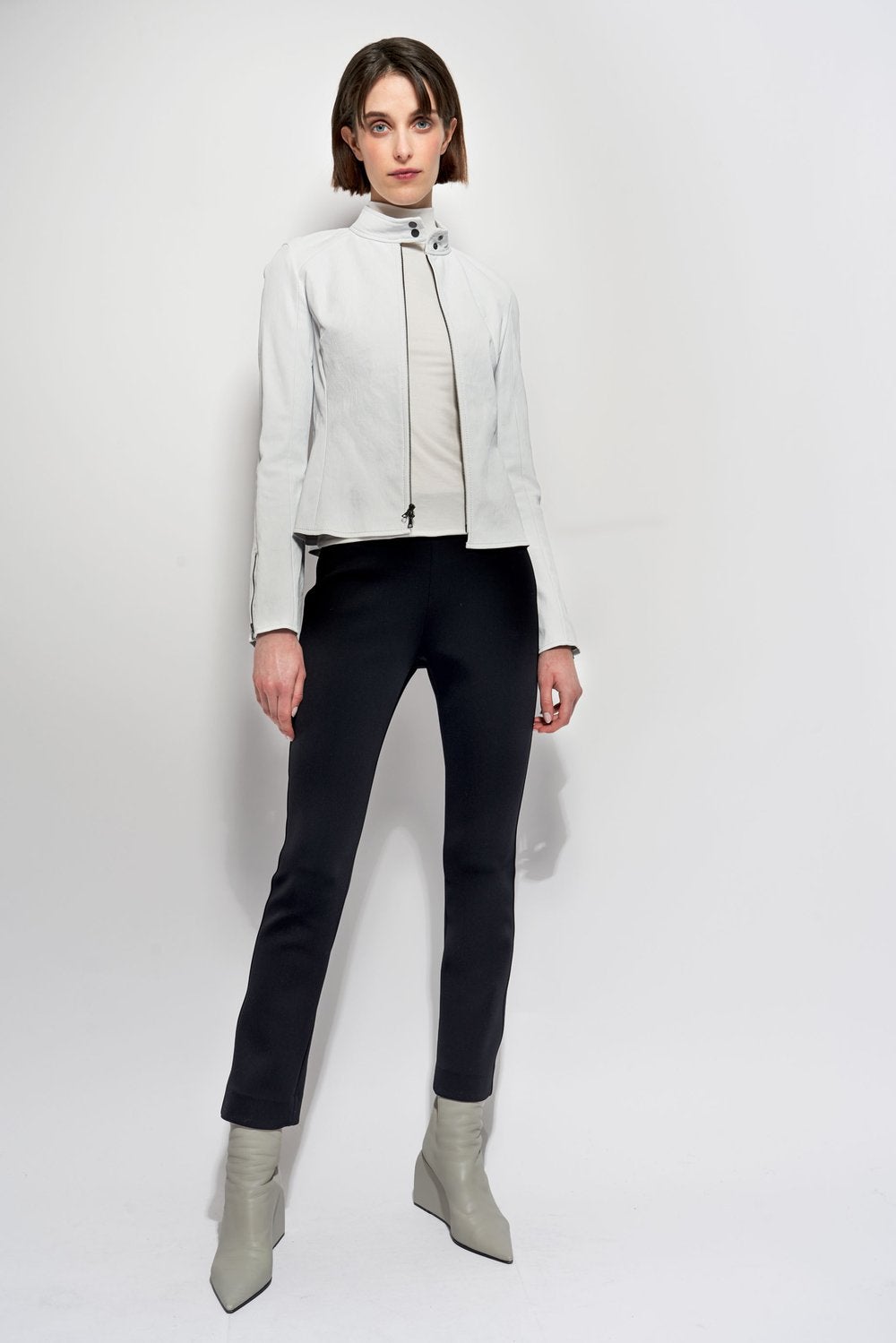 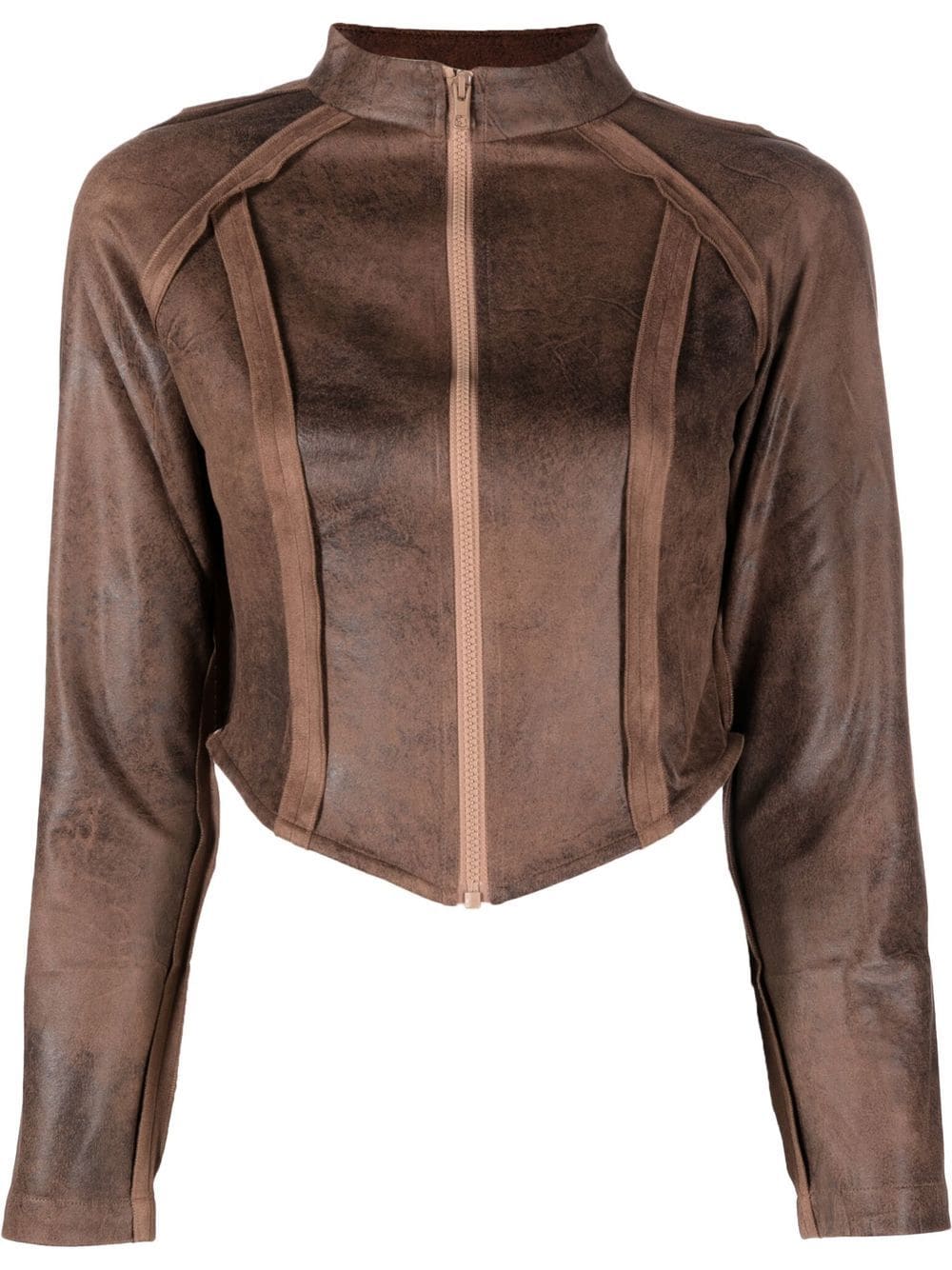 KIM SHUI
Kim Shui Moto Cropped Jacket
$315.00
Farfetch
Fashion
7 Copenhagen Fashion Week Fall 2023 Trends To Try Now
Perhaps no other city is simultaneously as inspirational as it’s pragmatic when it comes to fashion trends as Denmark’s capital. Sure, New York, London
by Kristen Bateman
Denim
These Top Jean Trends Are The Stuff Of Denim Dreams
Fashion icon Diana Vreeland once famously said: “Blue jeans are the most beautiful things since the gondola.” You certainly don’t need to
by Amanda Randone
Best Wedding Dresses
6 Bridal Fashion Trends That Will Be Everywhere In 2023
This year, wedding fashion will take a turn for the glamorous. As evidenced by the New York Bridal Fashion Week Fall 2023 lineup, casual slip dresses and m
by Frances Solá-Sant...
Advertisement
Fashion
7 Shoe Trends To Up Your Footwear Game In 2023
If your New Year’s resolution is to treat your wardrobe to a seasonally appropriate update, the best place to start is from the bottom. Solid style choic
by Amanda Randone
Fashion
6 Fashion Trends That Will Take Over 2023 — Shop Them Now
Four months after the new runway collections made a case for all we should expect in the new year, the 2023 fashion trends have started making their way in
by Irina Grechko
Fashion
8 Jewelry Trends That Will Ensure You Shine Bright In 2023
If your outfits aren’t making you smile, it might be time to update your accessories collection. At least that’s what Shopbop fashion director
by Amanda Randone
Engagement Rings
7 Engagement Ring Trends That Will Be Big In 2023, According to E...
Unlike popular runway styles, engagement ring trends tend to move on a slower, subtler track (there’s not a wedding ring equivalent of a butterfly top or
by Nicole Kliest
Fashion
7 Handbag Trends To Tote Around In 2023
While a new year doesn’t necessarily need to mean a new you, it could mean it’s time for a new handbag. This essential piece of your next arm p
by Amanda Randone
Coats
Scarf Jackets Are Winter’s Most Viral Coat Trend
HeatTech leggings, turtleneck, North Face jacket, scarf, beanie. That’s the winter essentials lineup I return to again and again when bundling up for the
by Aemilia Madden
Fashion
Mood Jewelry Is Back — & All Grown-Up
Some of my earliest memories of experimenting with personal style include acquiring a sizable collection of mood rings. Most were run-of-the-mill versions
by Shelby Ying Hyde
Fashion
5 Style Aesthetics That Will Take Over Fashion In 2023
The concept of fashion aesthetics is nothing new to the trend forecasting industry. Seasonal style stories that often pop off on social media platforms lik
by Kendall Becker
Fashion
How To Style Cowboy Boots For Winter — According To R29 Editors
Following the year-long reign of platform heels, there’s a new shoe trend that’s set to steal the spotlight this winter: cowboy boots. Having f
by Irina Grechko
Advertisement
Advertisement
Discover
R29 Stories & News
Watch
R29 Original Series & Films
Shop
R29's Most Wanted