Skip navigation!
Story from Trend Tracker
Like Brood X cicadas, tube tops emerge from the fashion spin cycle every 17 years (give or take). The minimal tank’s origin story is the stuff of garmento legend: in the early 1970s, designer Elie Tahari discovered a pile of fabric “tubes” at a clothing wholesaler and snuck them into a trade show where he was mobbed with customers. “It was totally disco,” he told the New York Times in 2012, “It was an East Village happening. ‘I am not wearing a bra! I am a modern hippie girl!’”. It was then in the late 1990s and early 2000s when the strapless style became a red-carpet phenomenon; paired with low-rise jeans and handkerchief skirts on such celebs as Paris Hilton, Britney Spears, and Cameron Diaz. And now, roughly 20 years later, the most high-stakes hot girl summer on record is upon us, and tube tops — in lieu of jumping off the pages of the dELiA*s catalog — are suddenly popping up in our feeds and inboxes. The latest retailer to jump on the itty-bitty bandwagon? Everlane, a pared-back DTC brand known for its just-right takes on modern basics. While it seems like a surprisingly of-the-moment choice for the staples-driven imprint, it makes sense; few tops are as minimal as the strapless, bandage-tight, and detail-free tube.
Advertisement
Everlane’s tube top seemingly aims to provide as much support as possible for the inherently barely-there style; made from a stretch-blessed Pima cotton that's woven in a double-layered knit, outfitted with no-slip grips, and completed with a built-in shelf bra. It retails for $25 bucks a skimpy pop and is offered in a splash of six summery colorways: crisp white, classic black, iced-latte-like clay, baby blue seaglass, red-hot scarlet, and creamsicle-orange sienna. This '90s-inspired style has yet to clock any customer feedback — namely, on how it fares for larger chests — but we’re pretty sure we're about to witness a summer chock full of Everlane tube tops bopping around to the tune of Olivia Rodrigo's Sour. 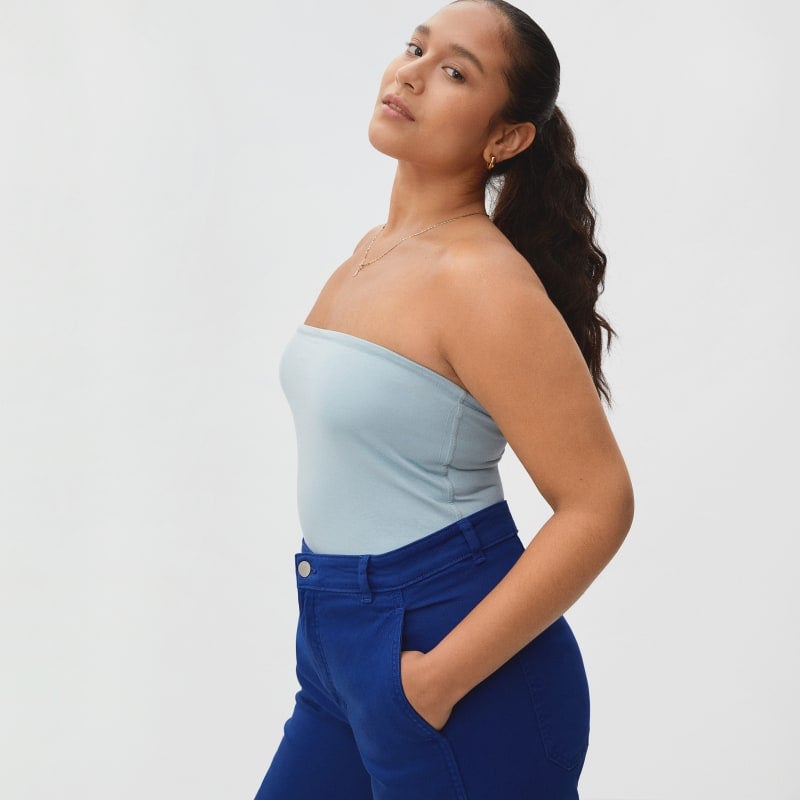 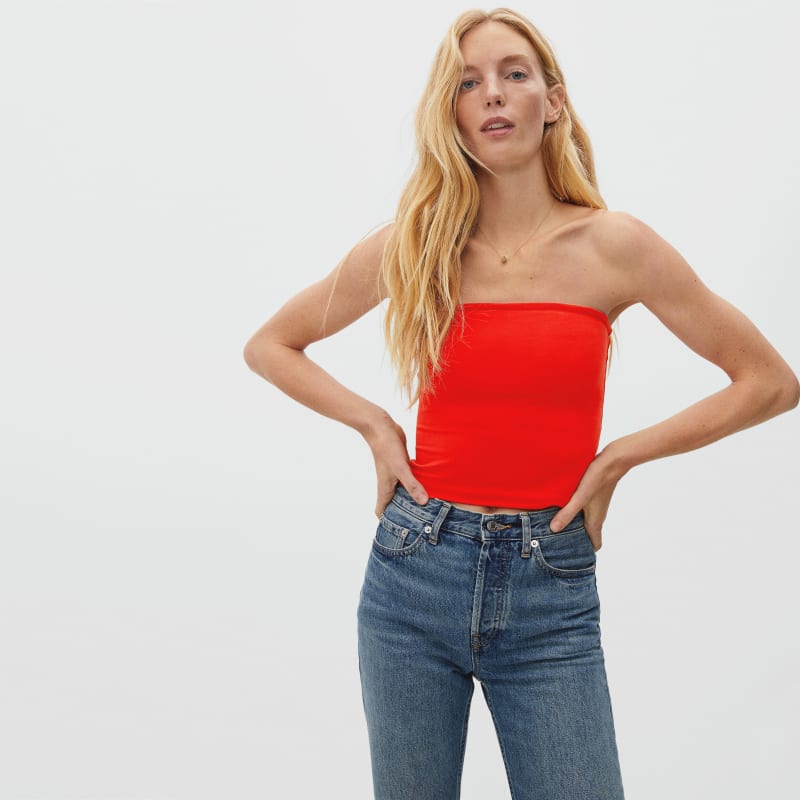 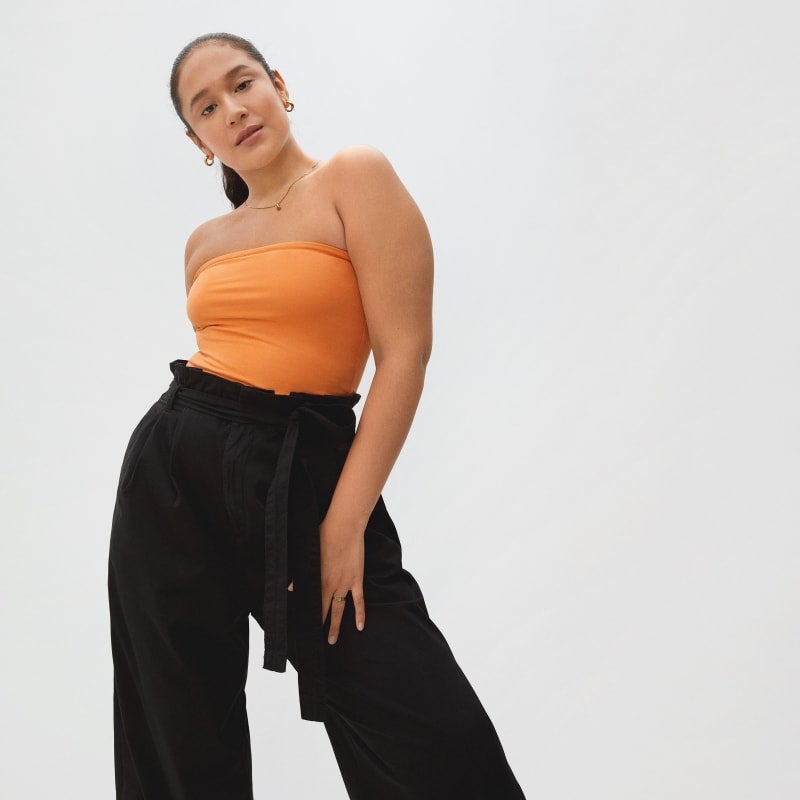 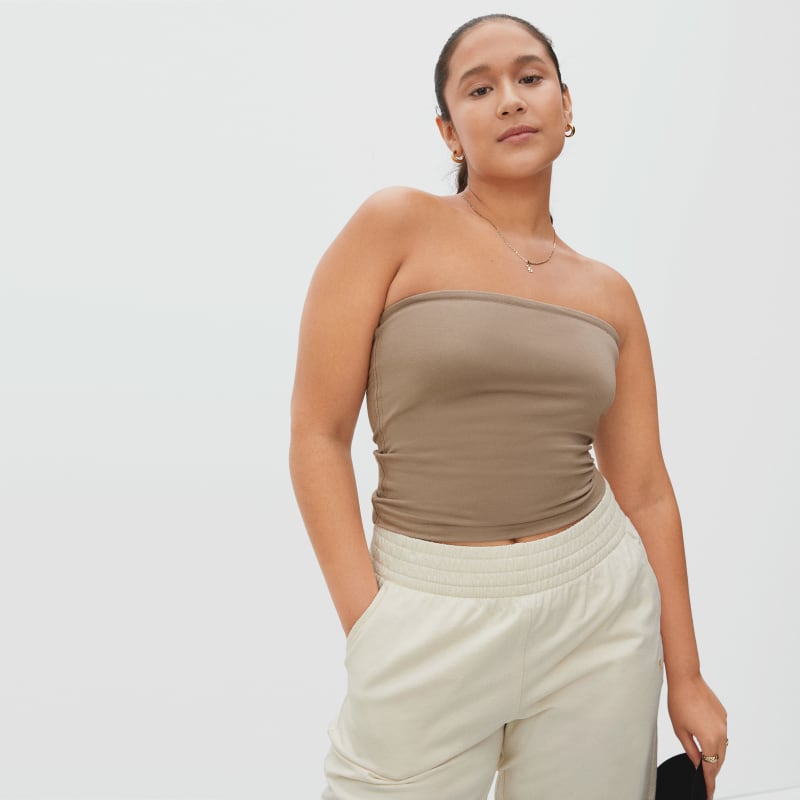 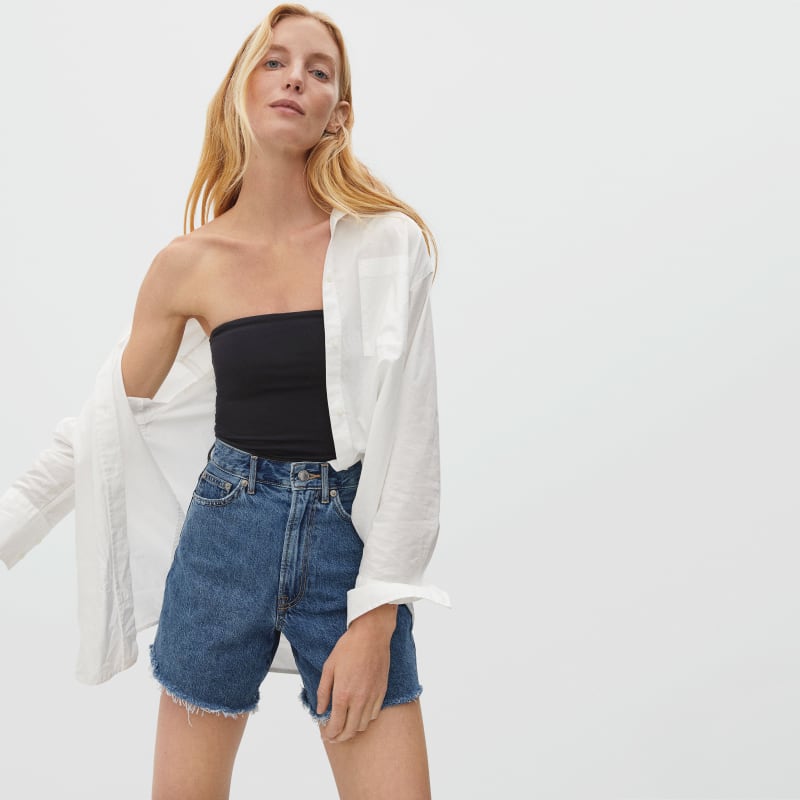 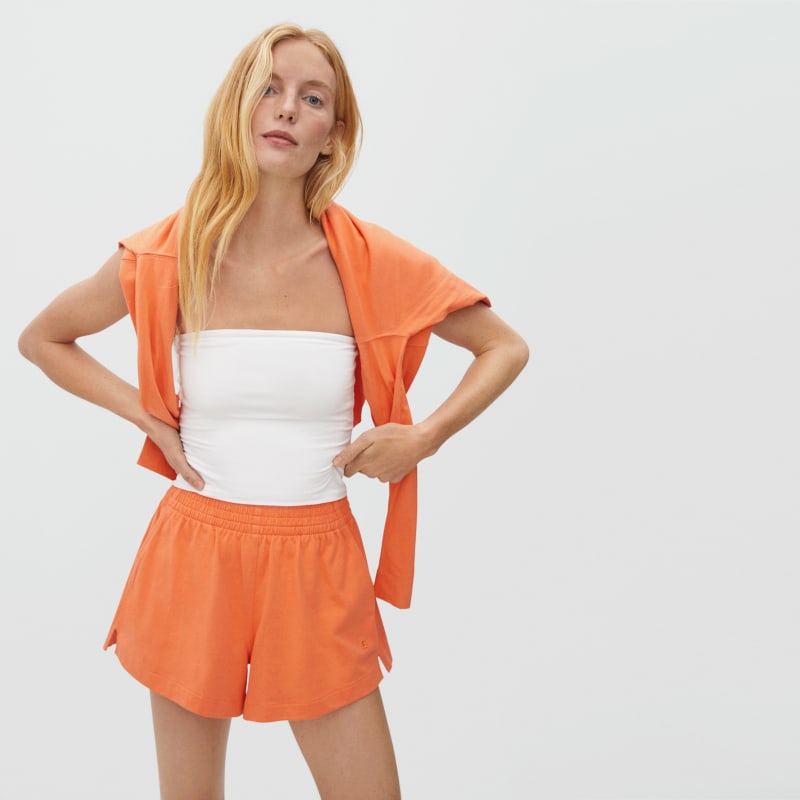 Everlane
The Tube Top (white)
$25.00
Everlane
At Refinery29, we’re here to help you navigate this overwhelming world of stuff. All of our market picks are independently selected and curated by the editorial team. If you buy something we link to on our site, Refinery29 may earn commission.
Best Clogs
This Under-$40 Clog Boot Only Looks Expensive
You’re reading an On-Site Shopping story — meaning you can browse, add to cart, and actually purchase the product recommendations featured below withou
by Jinnie Lee
Fashion
Madewell’s New Capsule Collection Reinvents The OOTD — With House...
We’re not saying we called it, but just a few months back the R29 Shopping team dubbed house paint “Instagram’s new hottest accessoryR
by Alexandra Polk
Shopping
29 Valentine’s Day Gifts That Are Totally Outside The (Choc...
by Emily Ruane
Advertisement
Most Wanted
21 Very Sweet Personalized-Jewelry Gifts
by Emily Ruane
Shopping
Things Getting Me Through January: This Puffy Duvet Robe
Somewhere between uttering my final “Happy New Year!” and before my “How many days are left in January?” scaries set in, I obtained
by Elizabeth Buxton
Shopping
22 Black Boots To Help You Crush Winter Style
by Us
Dresses
The Best Sweater Dresses, According To Obsessed Shoppers
by Jinnie Lee
Workout Clothes
Girlfriend Collective’s Ribbed Bodysuits Are The Ultimate Layerin...
Sustainable activewear brand (and all-around fan-favorite) Girlfriend Collective has once again outdone itself. The eco-conscious athleisure brand is respo
by Jinnie Lee
Fashion
Plus-Size Sets To Get Matchy-Matchy With
Do you ever have those days where doing mundane tasks like brushing your teeth, doing laundry, and even getting dressed feel like a chore? I can relate. Bu
by Chichi Offor
Most Wanted
Athleta Is Slept On & Here’s Why You Should Be Shopping There
Here at R29, we’re all about sharing well-vetted products with you, so I’m here to share some of my personal favorites and some plus-size best sellers
by Chichi Offor
Cool Jewelry
Catbird’s Birth Flower Charms Beat Your Classic Bouquet
You can find NYC-based Catbird‘s delicate pieces the world over, from the halls of Buckingham Palace to the streets of Brooklyn. While it counts Megh
by Amanda Randone
Shopping
How HOKAs Became The “It” Sneaker Beloved By Both Mar...
If you’ve spent any time looking at running shoes (or everyday ugly dad sneakers, for that matter), it’s likely that you’ve already come
by Jinnie Lee
Advertisement
Advertisement
Discover
R29 Stories & News
Watch
R29 Original Series & Films
Shop
R29's Most Wanted