Skip navigation!
Story from Style
Photography by Kristen Jan Wong.
Ebony Francisco for KkCo.
Every so often, a dress comes along that people won’t stop wearing. Typically, it’s from Zara, and it’s spotted everywhere for a few weeks before disappearing as quickly as it appeared (see: Zara’s viral polka dot dress). In the case of this year’s viral dress, it isn’t a fast-fashion brand that’s responsible for its creation, nor is it leaving the scene anytime soon. Instead, the 927 dress, an ethereal long-sleeved sheer dress courtesy of Los-Angeles-based indie brand KkCo is only just getting started.
On Monday, KkCo’s founder and creative director Kara Jubin (see her advice on how to tie-dye at home here) released an all-new colorway for the popular 927 style. And unlike the neon shades of blue, pink, and orange that came before it, this new offering isn’t based on the latest color trend. Instead, the dress features sheer paneling in four skin tone shades, and is meant to "celebrate unity and showcase the beauty of diversity."
Advertisement

Introducing the Nine Twenty-Seven Dress in Four — now available for pre-order We made our favorite dress in four shades of skin tones to celebrate unity and showcase the beauty of diversity. Made in LA with Japanese organza. 100% of the profits will be donated to @summaeverythang Summaeverythang is a community center created by artist and fantasy architect, Lauren Halsey. The community center is based in South Central Los Angeles and is dedicated to the empowerment and transcendence of black and brown folks socio-politically and economically, intellectually and artistically. Recently they have been focusing on donating and delivering organic produce from Southern California farms to communities in South central LA.

For every purchase of the new colorway, called Four, 100% of the proceeds will go to Summaeverythang Community Center, a nonprofit founded by artist and architect Lauren Halsey, that donates and delivers locally-sourced organic produce to communities in South Central L.A. and acts as a resource. “I began [Summaeverythang] as a space to support and sustain all sorts of intelligence in the hood — from academic to intellectual,” Halsey wrote on the organization’s website. “The center is a site to develop Black and Brown empowerment: personal, political, economic, and sociocultural.”
“It’s not the sales that are important, but what the sales represent," Jubin said in a statement. "This dress is a tool to amplify the conversation around unity but also contribute back to a cause that is important to us.”
In the lookbook, the 927 dress is styled in two ways: sans underwear with a pair of cowboy boots, and layered over top of a lime green one-shoulder tank top. The second look is paired with white socks and black chunky mules.
KkCo’s latest version of the 927 dress is made locally in L.A. using Japanese organza and costs $595. Pre-order yours today on kkcostudio.com. You can also donate directly to Summaeverythang Community Center at www.summaeverythang.org.
At Refinery29, we’re here to help you navigate this overwhelming world of stuff. All of our market picks are independently selected and curated by the editorial team. If you buy something we link to on our site, Refinery29 may earn commission. 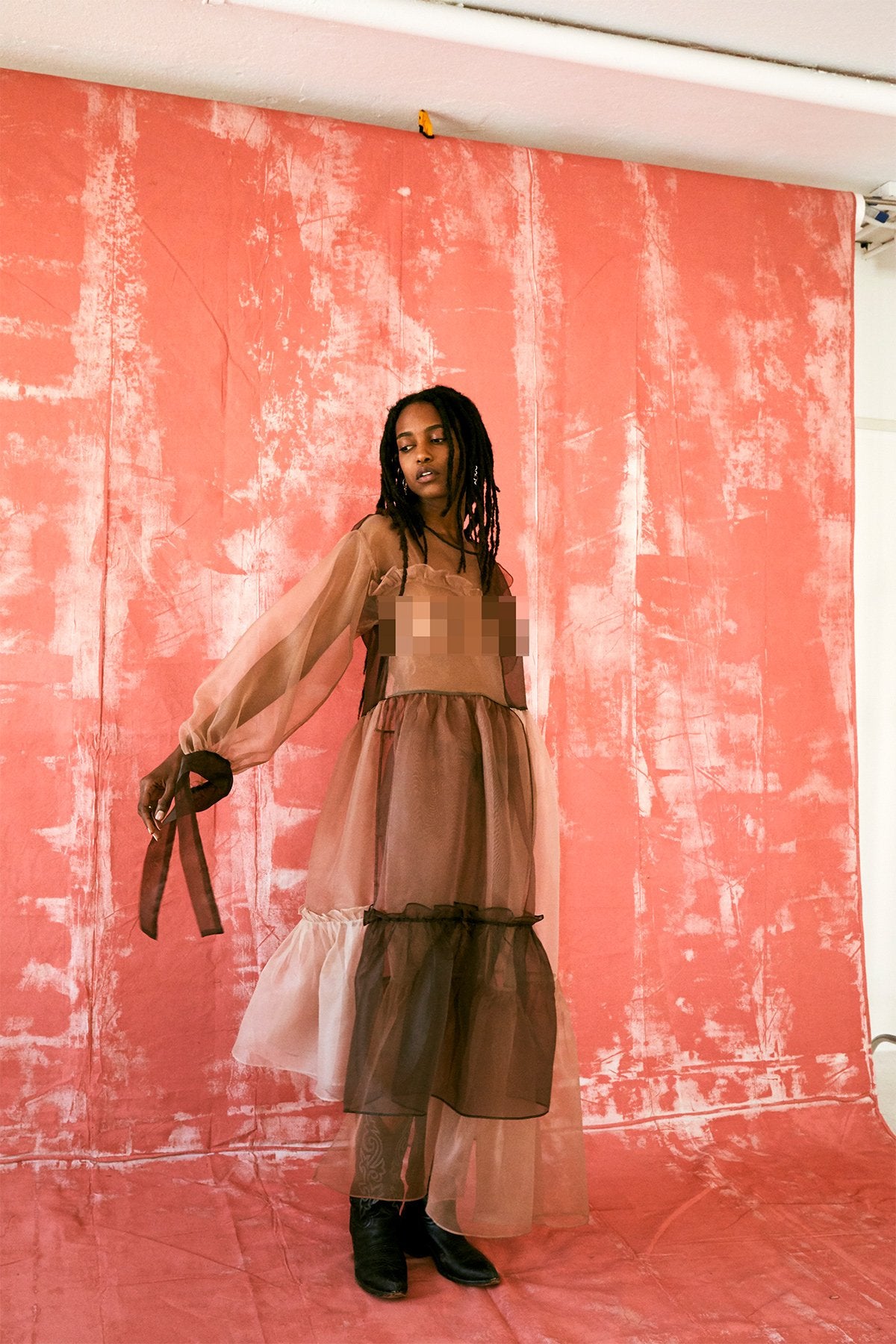 KkCo
Nine Twenty Seven Dress Navy
$575.00
KKCo
Plus-Size Fashion
The Best Plus-Size Undies On The Internet
by Chichi Offor
Fashion
We Tried The Most Popular Swimsuit Brands Out There — Here Are R2...
If you’re anything like us, you may have finally gotten around to pulling out your bikinis for the warm-weather season just to discover that your swi
by Irina Grechko
Deals
The TikTok Famous Binder Alternative From Girlfriend Collective I...
Super Sale Alert: Products in this story are marked down up to 60% off for a limited time. Shop our full coverage of the event here — or, dive directly i
by Mercedes Viera
Advertisement
Sales
Everything At Girlfriend Collective Is On Sale For Up To 60% Off
Girlfriend Collective’s sustainable workout togs were built for movement — the brand’s cloud-like leggings, stylishly-cut sports bras, and super-soft
by Alexandra Polk
Most Wanted
Here’s What You Need To Get From Herbivore Botanicals 25% O...
If your skincare routine needs some revamping, we have good news. Herbivore Botanicals is offering 25% off everything on its site for a limited time. Simpl
by Mercedes Viera
Fashion
How I Built A Summer Capsule Wardrobe After Living Out Of A Suitc...
After a far too quiet past couple of years, we certainly have had our wish of a revived social life, granted thanks to the return of weddings, family reuni
by Kendall Becker
Somos Latinx
7 Latina-Owned Secondhand Shops That Promote Sustainability
Like many immigrants, Latines have a complicated history with secondhand shopping. Some of us grew up parsing through thrift stores out of necessity. Other
by Tess Garcia
Shopping
The 13 Best Black T-Shirts On The Internet (Because Everyone Need...
by Bobby Schuessler
Deals
Save Up To 89% Off Your Favorite Sex Toys From Ella Paradis With ...
Super Sale Alert: You have until June 30 to get an extra 15% off already-discounted toys from Ella Paradis with exclusive promo code ELLAR29. If
by Mercedes Viera
Most Wanted
15 Loungey Rompers You Can Live In This Summer
by Emily Ruane
Fashion
Sustainable Shoe Brand Cariuma Launches A Slip-On Sneaker
We’re all about bringing you the latest and greatest innovations in the green shoe world. From Sylven’s vegan, apple-leather creations to Refor
by Chichi Offor
Style
Target’s New Tabitha Brown Collection Is In Stores Now
by Chichi Offor
Advertisement
Advertisement
Discover
R29 Stories & News
Watch
R29 Original Series & Films
Shop
R29's Most Wanted