Skip navigation!
Story from Fashion
Fashion is always moving forward, always morphing and changing, always trying to outrun itself. In 2009, the fashion blogger was born, street style photographers started to become industry mainstays, and young women with disposable incomes and a bit of marketing savvy saw their chance to become what we now call “influencers.”
In 2015, Reese and Molly Blutstein, fraternal twins living in Atlanta, Georgia, decided they would start an Instagram account to post pictures of their outfits. The sisters had both grown up with an interest in fashion, spurred in part by their grandmother, who they both cite as an inspiration. For Reese in particular, the fascination eventually led her to discover all the style bloggers who were now calling Instagram home. “I’ve always been interested in styling clothes,” Reese tells Refinery29. “I saw other people [posting outfits on Instagram] and I thought, oh, I think I could do that.” Two years later, @double3xposure, as they named it, boasts 161,000 followers, and Reese and Molly are the internet girls du jour.
Advertisement 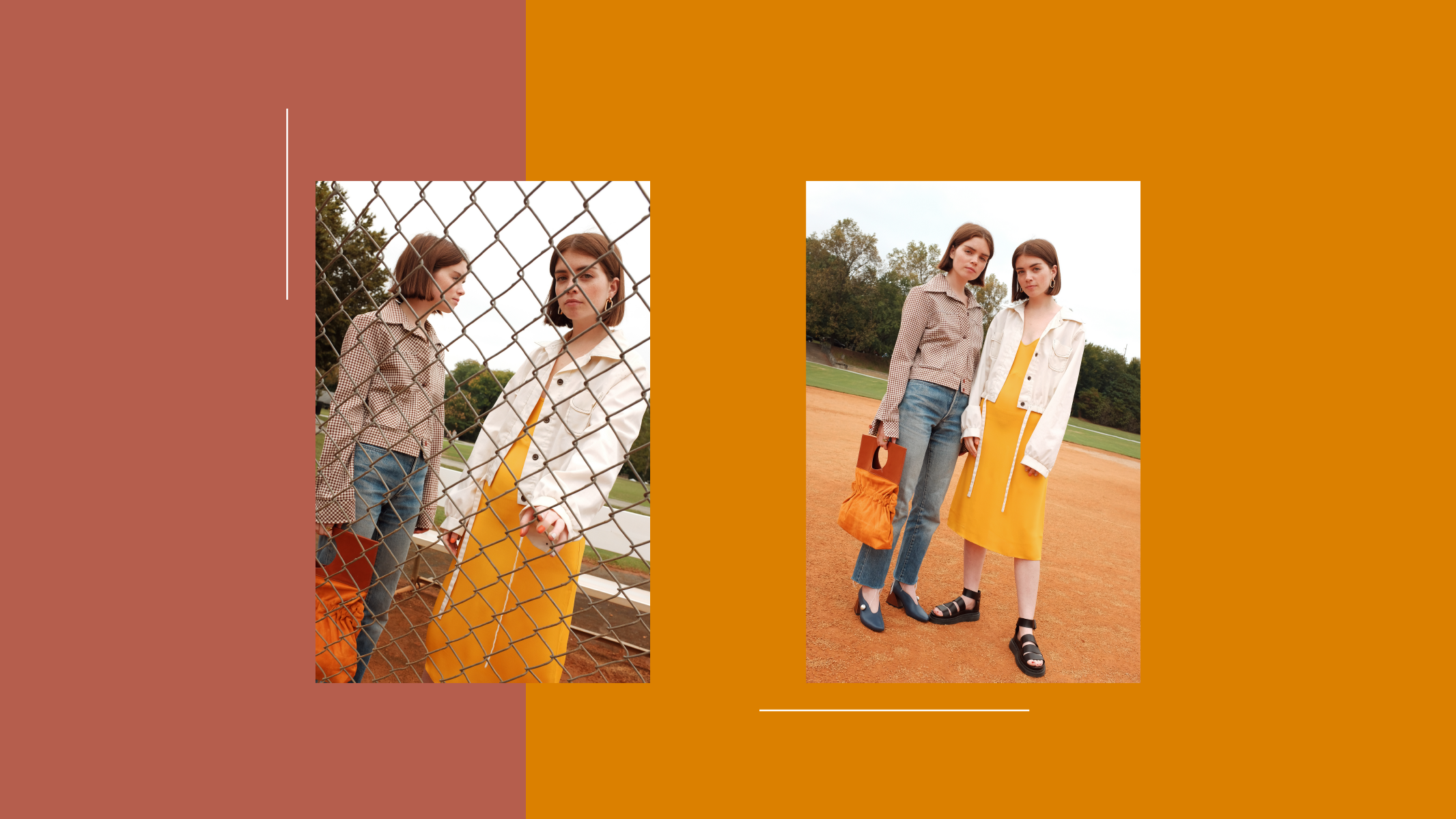 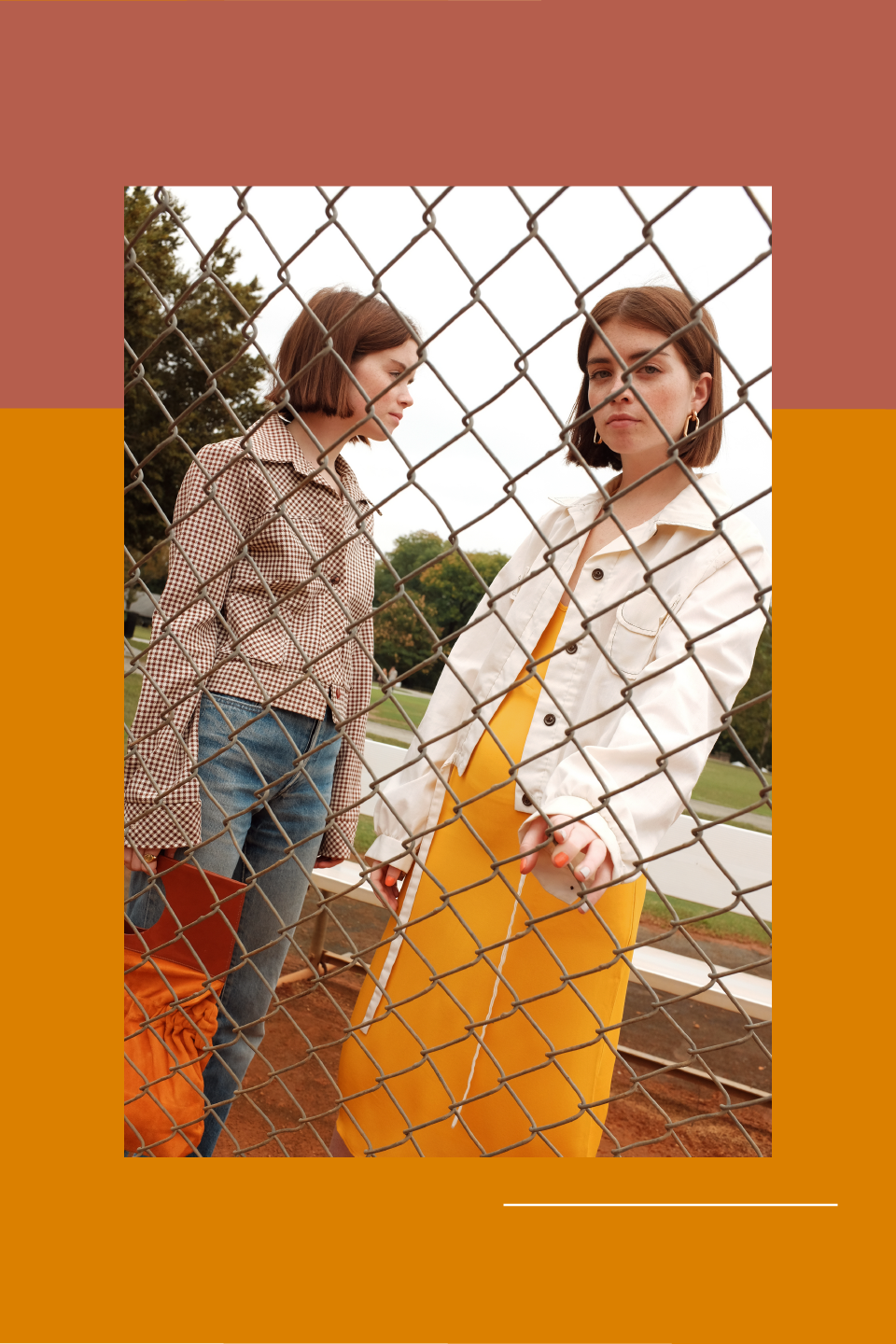 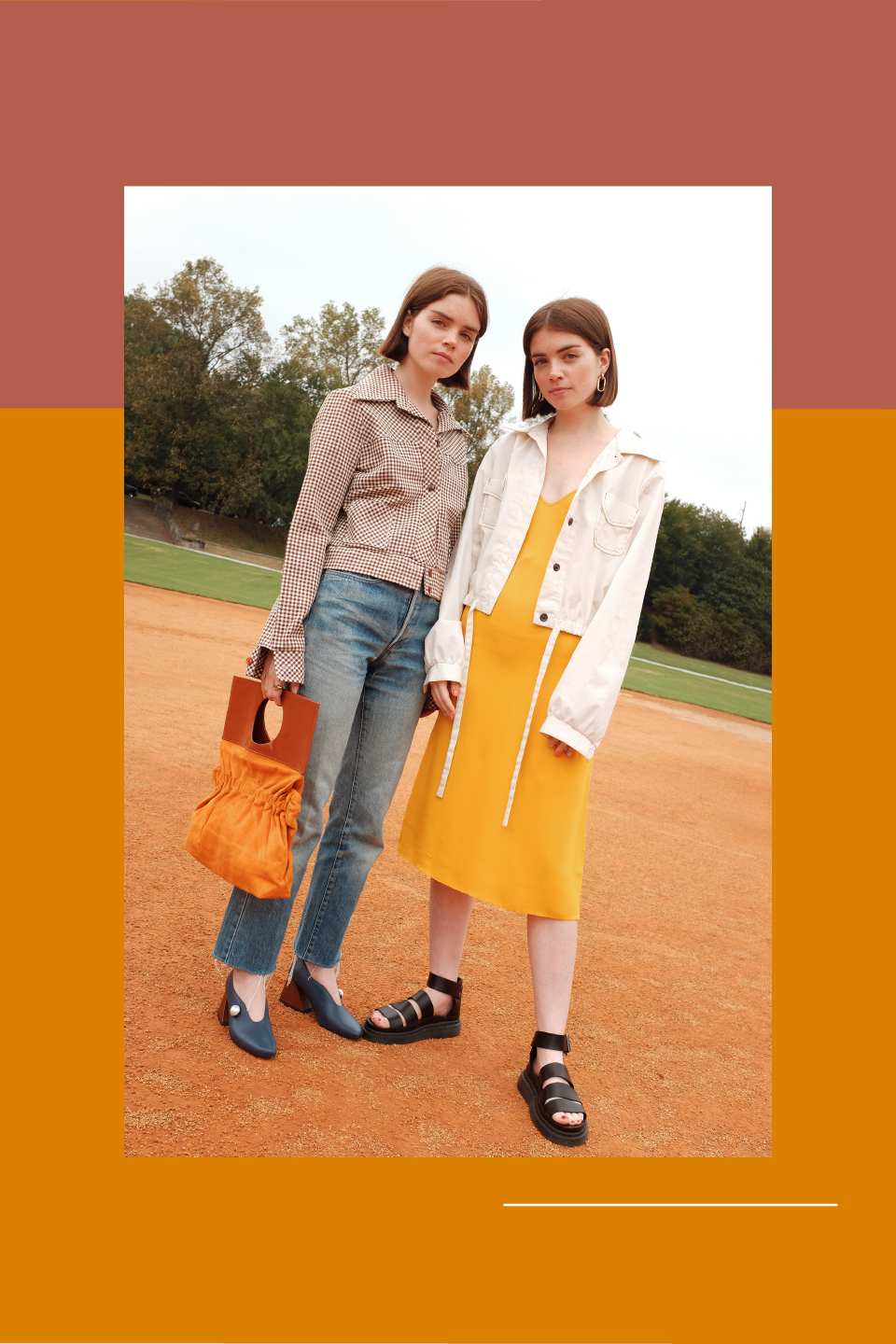 Reese: Vintage Levi's; vintage jacket; Yuul Yie Pumps, $383, available at Yuul Yie; Rachel Comey bag; Molly: Araks Cadel Slip, $320, available at Shop Super Street; vintage jacket; Dr. Martens Clarissa Brando, $130, available at Dr. Martens; Pamela Love Beaumont Earrings, $200, available at Pamela Love.
Reese and Molly are both petite young women with auburn hair, porcelain-white skin, freckles, and the kind of eyes that go from blue to gray to green depending on their surroundings. Their skin glows with the kind of no-makeup makeup pioneered by the folks at Glossier. Their style is minimal and borders on “normcore," but without the subversive edge that characterized its early iteration. Whereas the first wave of influencers gained followers and notoriety over their ability to wear the latest runway pieces as soon as they became available, Reese’s initial outfits featured skinny, ripped jeans from ASOS, dresses from Urban Outfitters, and basic turtlenecks, all tagged with hashtags like #ootd #fashionblogger #styleblogger. Part of their appeal lies in the fact that when young women look at them, you imagine they think they too could do this for a living. All they would need is the right lighting, or a constant companion to take the perfect photograph.
Although originally their plan was to “blog” as a duo, when Molly went away to the University of Georgia, where was pursuing studies in Interior Design, Reese decided to do the account on her own. The first post that appeared on the @double3xposure feed was a bird’s eye shot of a pair of black and white Dolce Vita loafers that were pretty popular at the time, with a simple, if not terribly uninformative, caption consisting of black and white emoji squares. Three months after Reese launched the account, Molly made her first appearance; she wore a camel-colored sweater, white skirt, and black and white loafers, while Reese was in a denim babydoll top, jeans, and black open-toed booties. Three months after that, the two appeared in mix and match American Apparel swimsuits. At the time, Molly had a personal Instagram account that was private, but once her sister started tagging her, the follow requests started coming in. Eventually, Molly made her @mollyblutstein account public. She now boasts over 15K followers, even though she’s posted less than 50 photos since October 2015. An accidental influencer.
Advertisement
Meanwhile, Reese's follower count grew, as did her confidence as a creative force. “I went from taking mirror pictures to [going] out into the streets and taking actual photos," she says. "I think I just got more comfortable with doing it out in public. Once I started noticing people that I knew, that I looked up to, started following me, I was like oh, gosh, I must be doing something right!” By February of this year, images on the @double3xposure account were routinely reaching anywhere from 5k to 11k likes, and Reese signed with Max Stein, an agent whose agency, Brigade, also represents major influencers like Man Repeller’s founder Leandra Medine, fashion editor Shiona Turini, and Tina Leung among others. 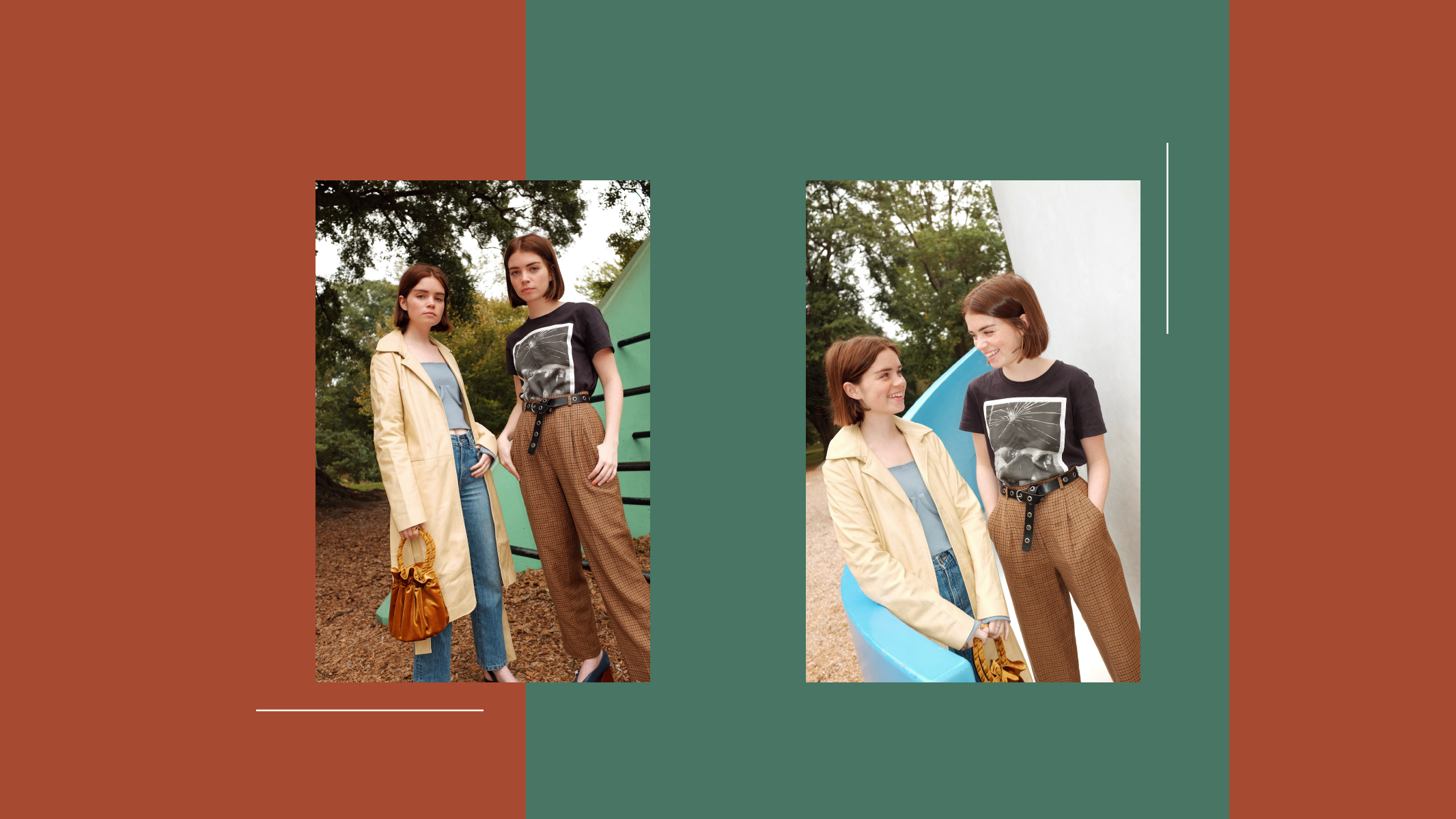 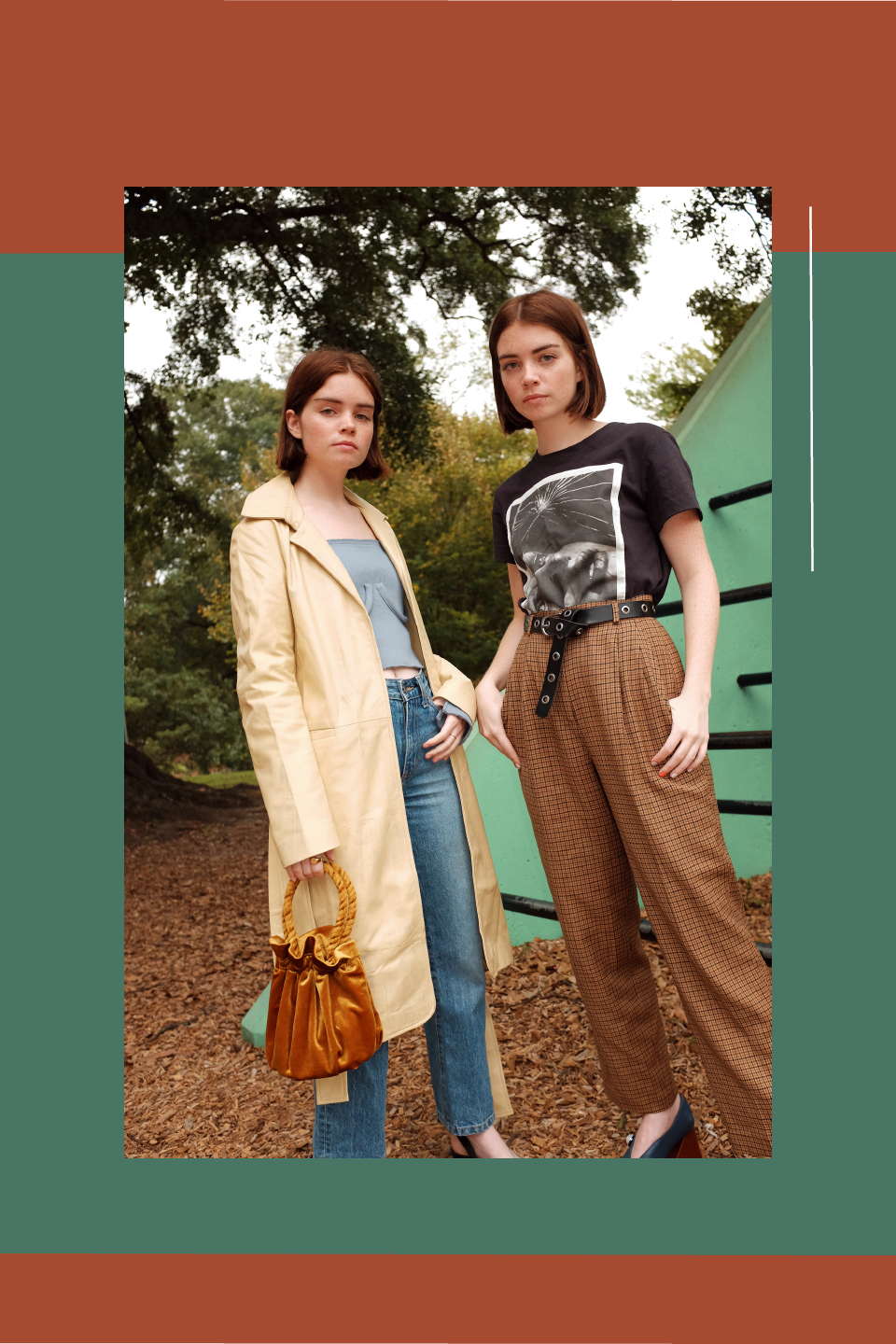 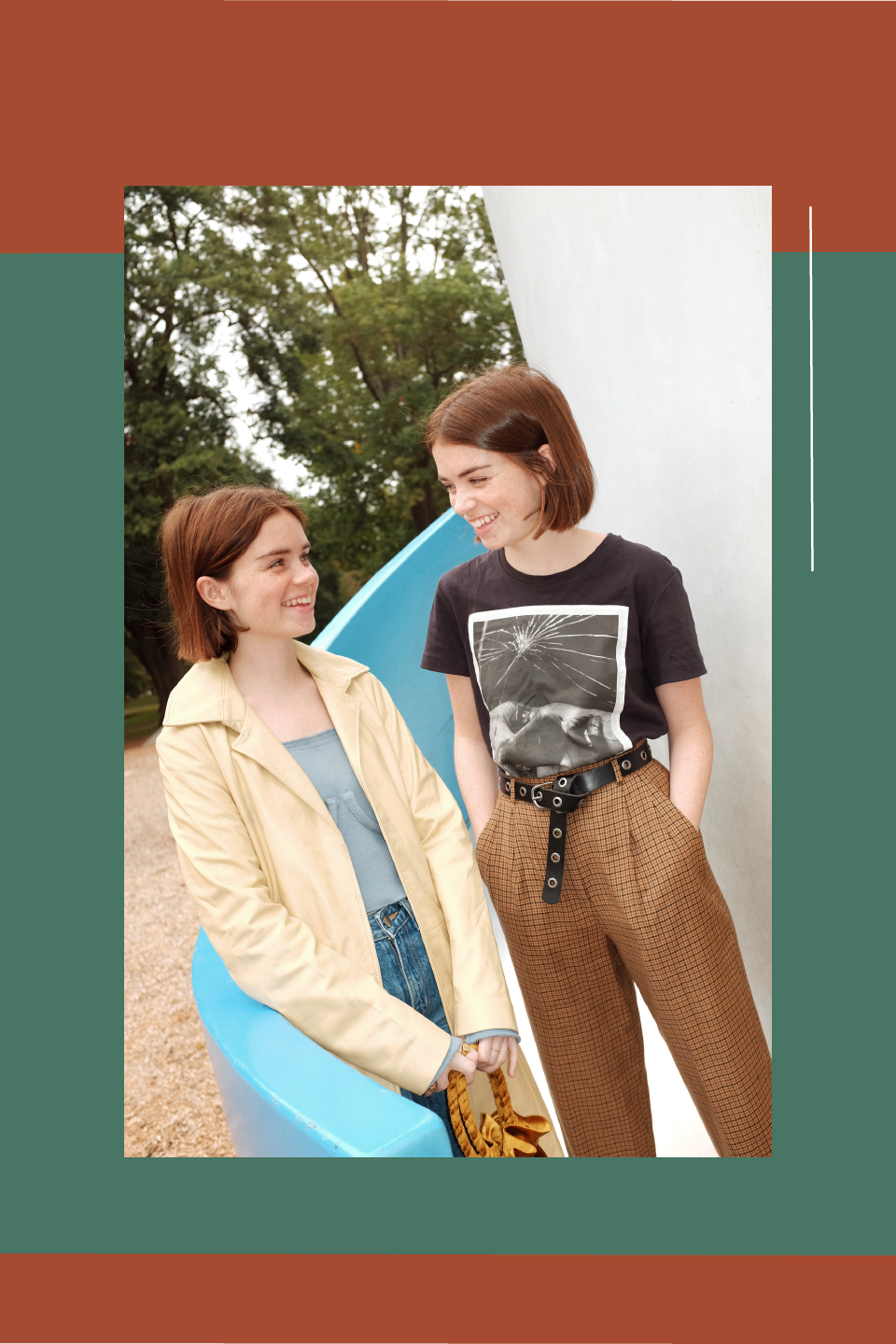 Reese: Orseund Iris Off Shoulder Knit Top, $260, available at Orseund Iris; Maryam Nassir Zadeh coat; NEED Cousin Fit Jeans, $185, available at Need Supply Co.; Staud bag; Molly: Jil Sander T-shirt, $197.92, available at Jil Sander; vintage pants; American Eagle Grommet Belt, $22.46, available at American Eagle.
“Blogging is so personal and you’re very attached to [the content you’re creating],” Reese says. “I think making money is intimidating because it’s awkward to talk about money, so to have someone that isn’t afraid of that, and that is also a step away from everything, [has] changed everything.” She quit Georgia State University, where she was studying art, to focus on her influencer career. 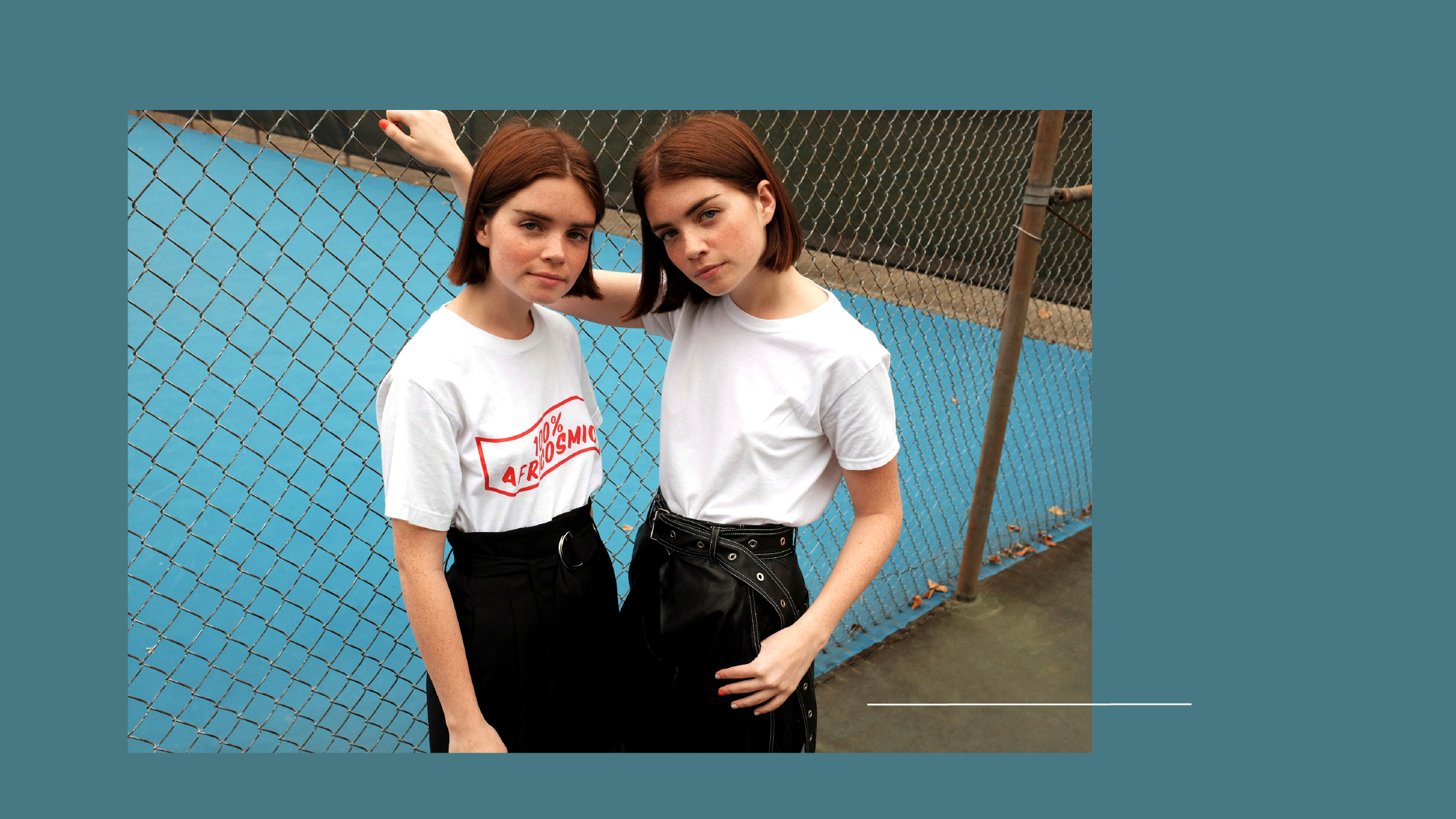 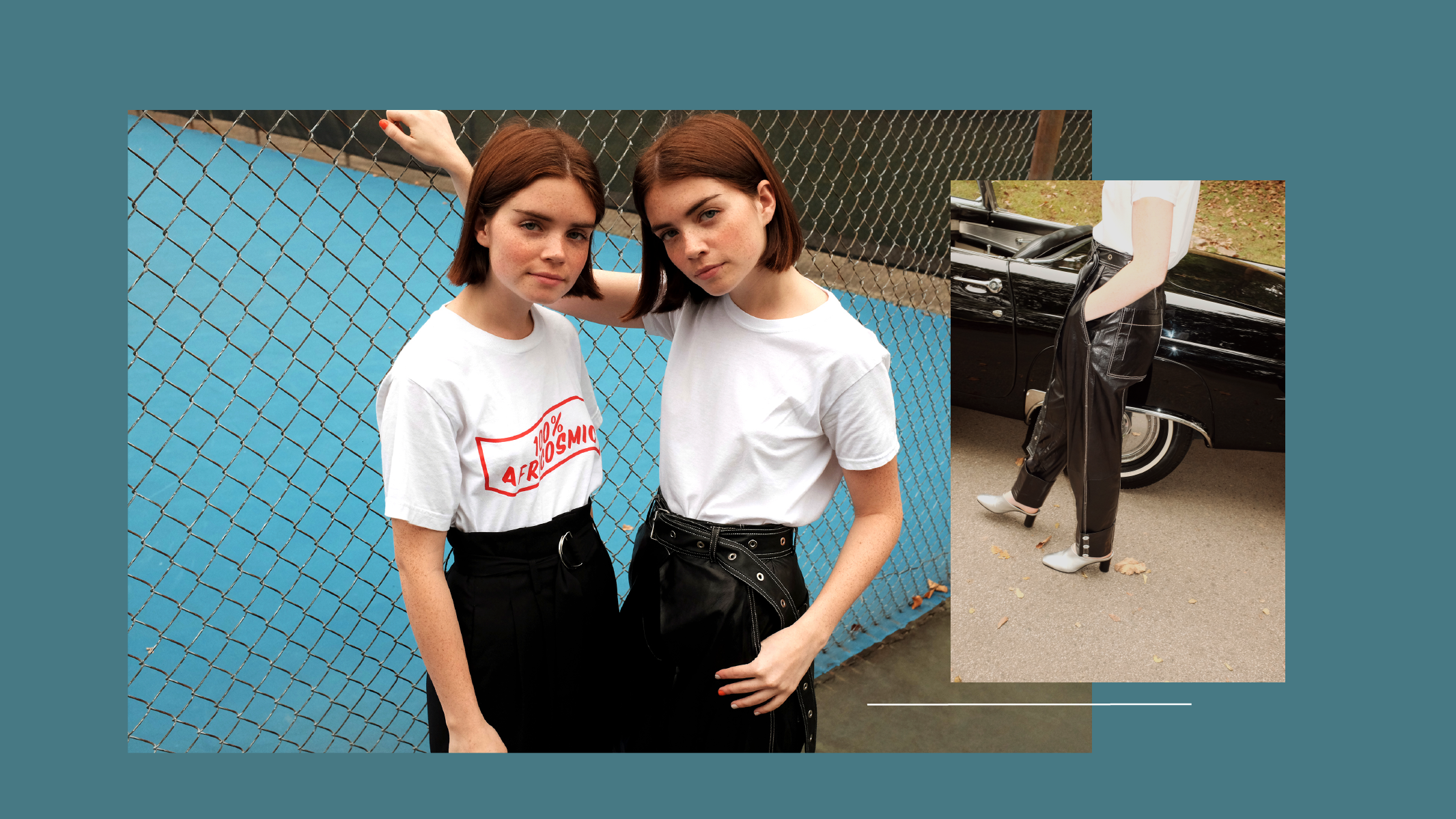 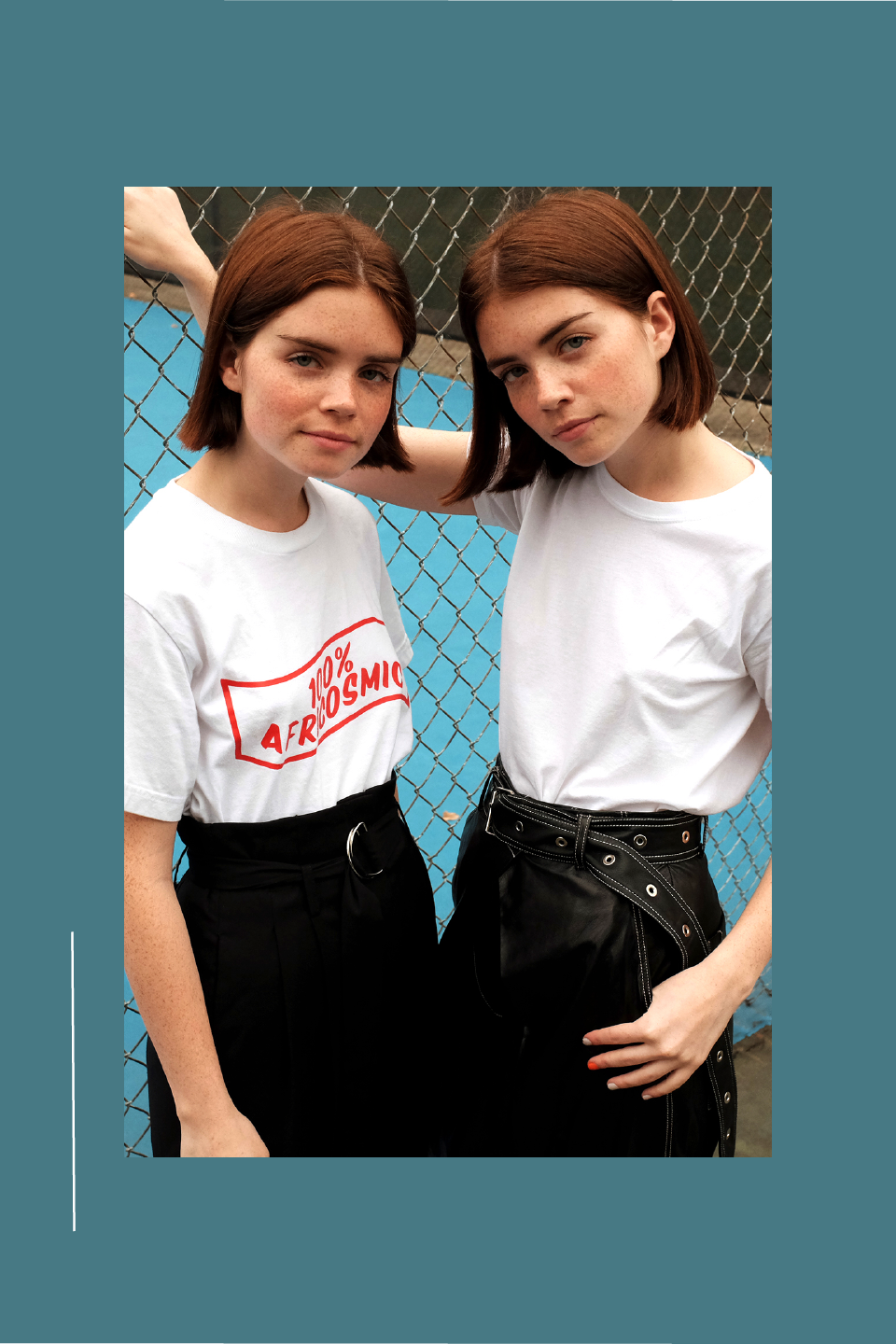 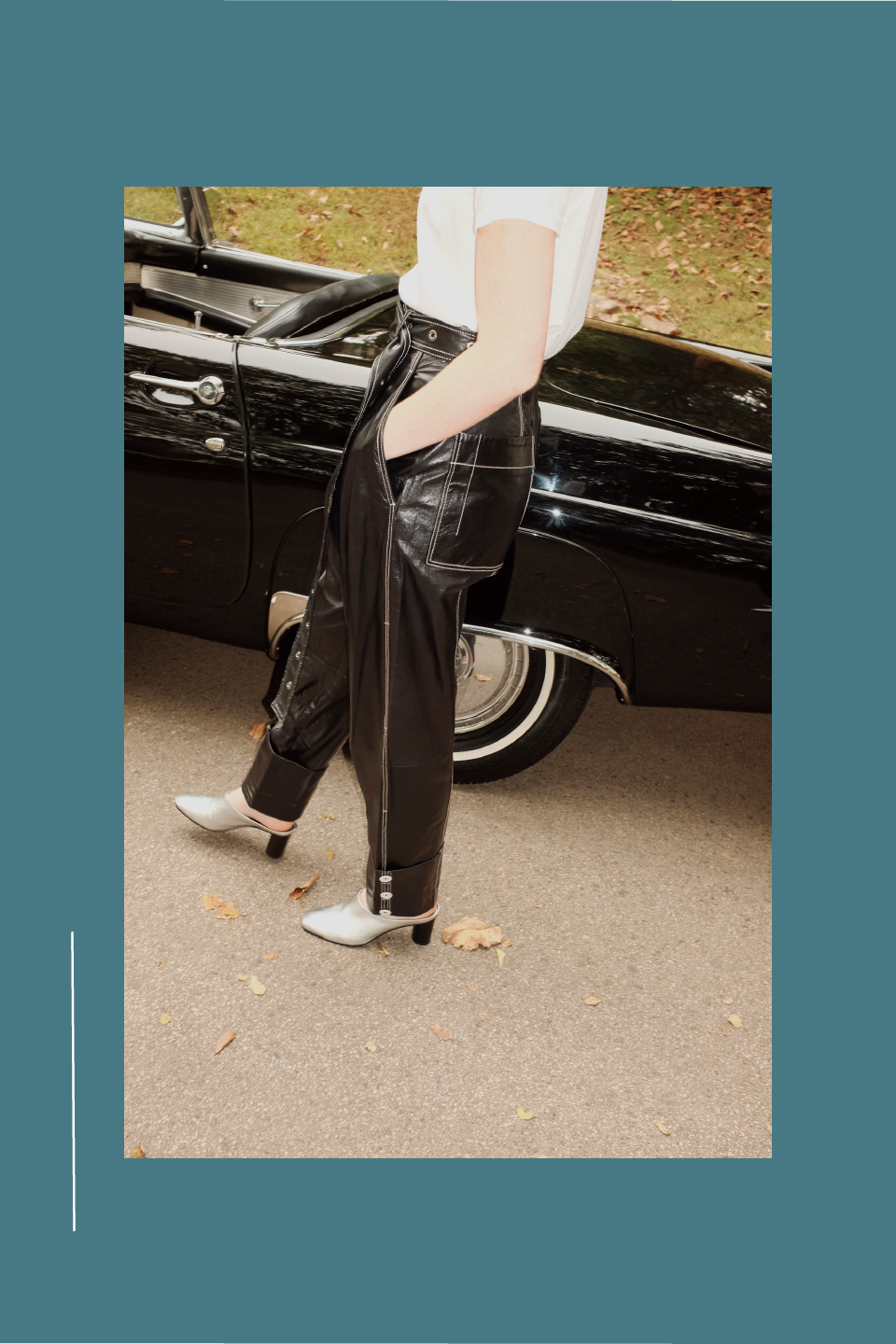 Reese: Super Yaya 100% Africosmic T-shirt, $60, available at Super Yaya; Pixie Market Black Belted High Waisted Pants, $118, available at Pixie Market; Molly: Hanes Relaxed Fit T-Shirt, $5, available at Hanes; Proenza Schouler Leather Belted Straight Pant, $858, available at Proenza Schouler; Gray Matters Micol Mule, $440, available at Gray Matters.
Advertisement
“It was hard to concentrate at school because I [felt] like why am I here? what am I doing here?. I felt like I actually learned more and met more people when I wasn't in school." Although going into 2018 with a full-time focus on being a “style blogger” — “people call what I do ‘influencer,’ which technically is what I do, but I don’t like that word,” Reese admits — she has no plans to move away from Atlanta, the city she says has given her a bit of an edge in the already cluttered world of influencers. “I think living in Atlanta helps me stay more genuine to myself because I'm not part of the fashion industry here, because there really isn't one,” Reese says. “When I'm traveling I'm part of [the industry] but then [I get] to step back from it [when] I’m back in Atlanta, so it’s way easier to just be me and not compare myself or try to be like the same people in the city.” She may not live in New York or Los Angeles, but her feed now has that classic Insta-girl look that has become its own aesthetic, regardless of real-life location. A #vibe that is both everywhere and nowhere. Her feed now includes Gucci #sponcon, Proenza Schouler’s latest sportswear drop, and the Nanushka brown bomber jacket that was literally put on the map by various Insta-girls (“It looks like you’re wrapped in a croissant,” Reese says); all photographed against desolate, textured, brightly colored backgrounds. You don’t need to be in New York or Los Angeles to find those.
Advertisement 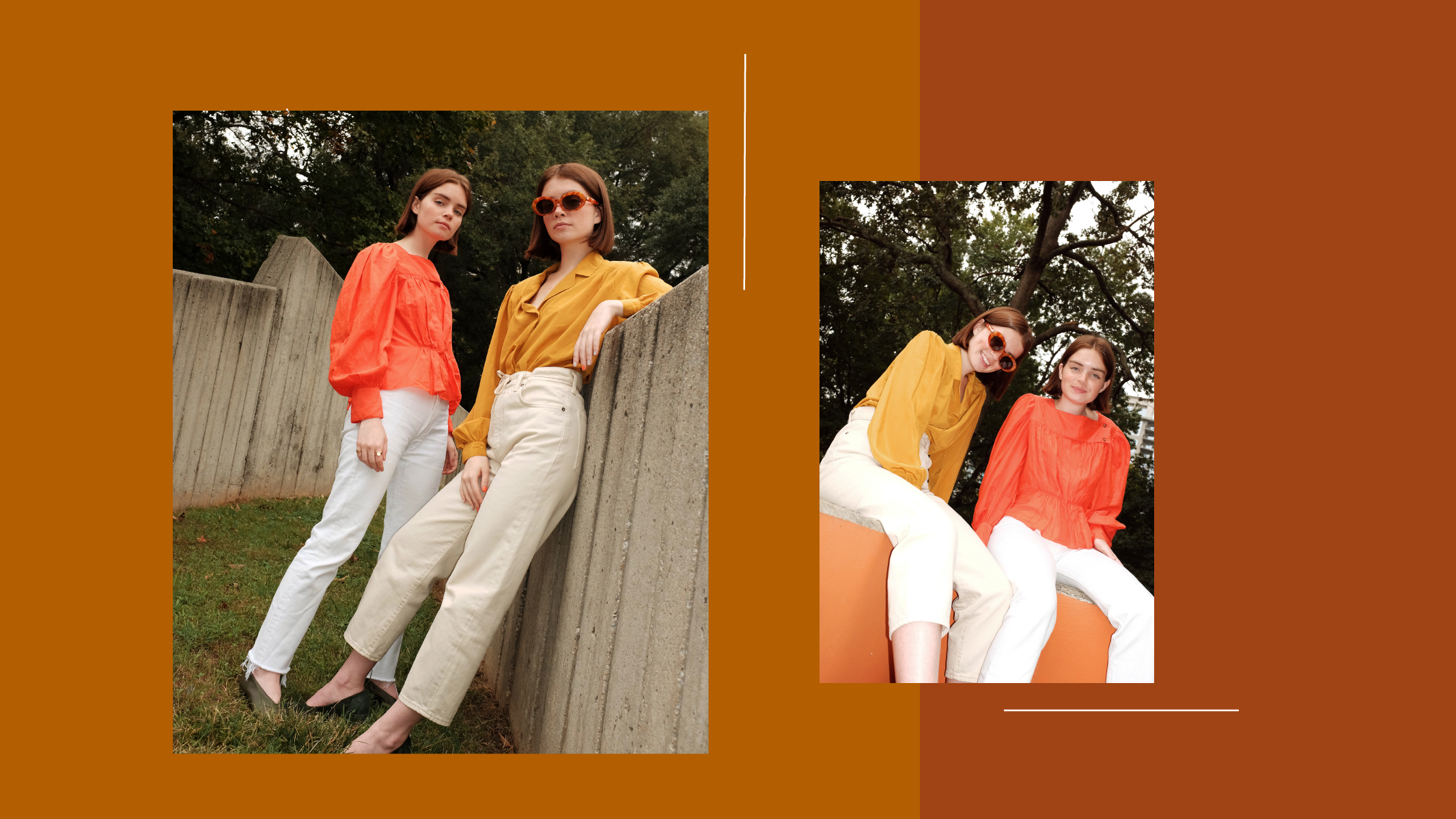 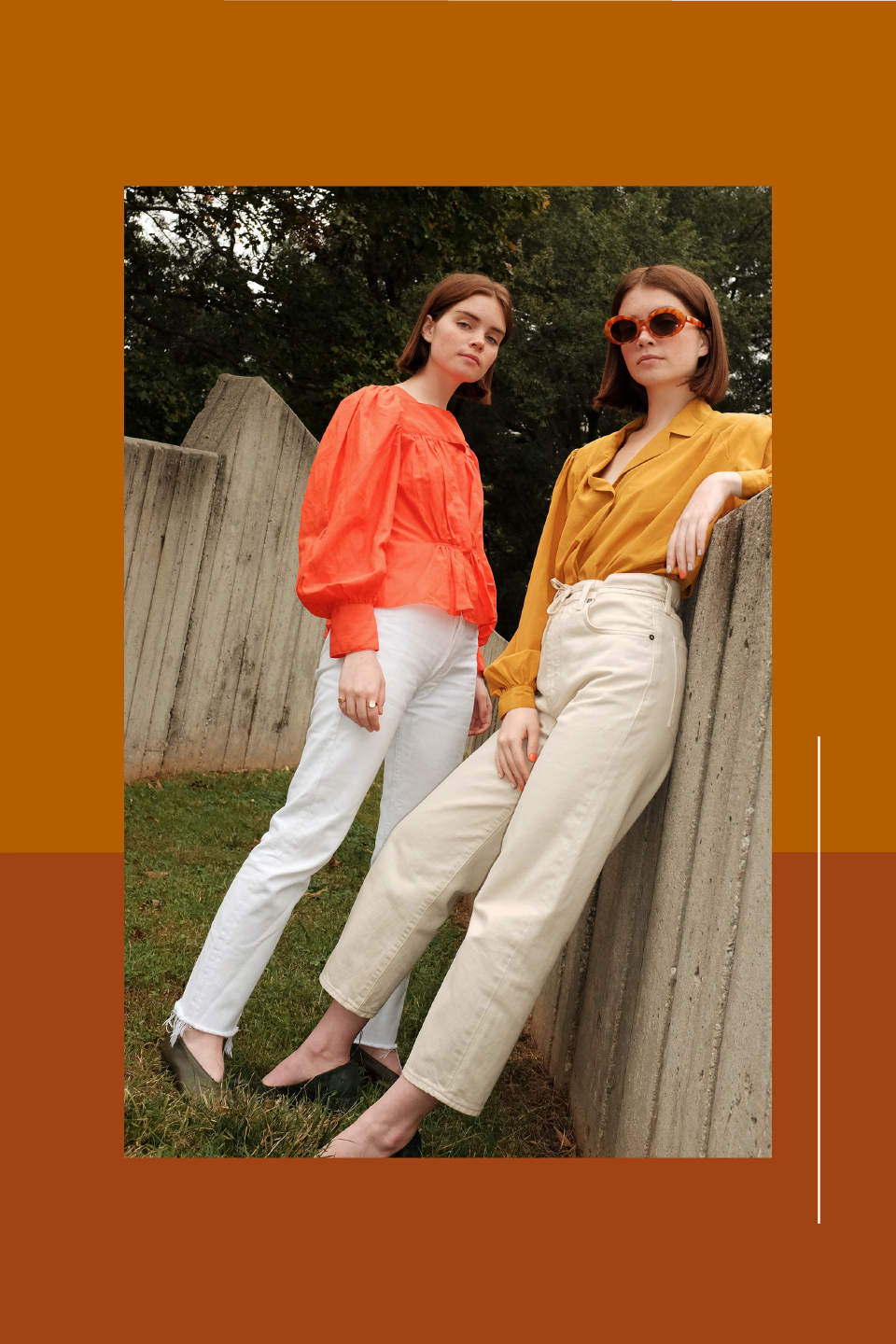 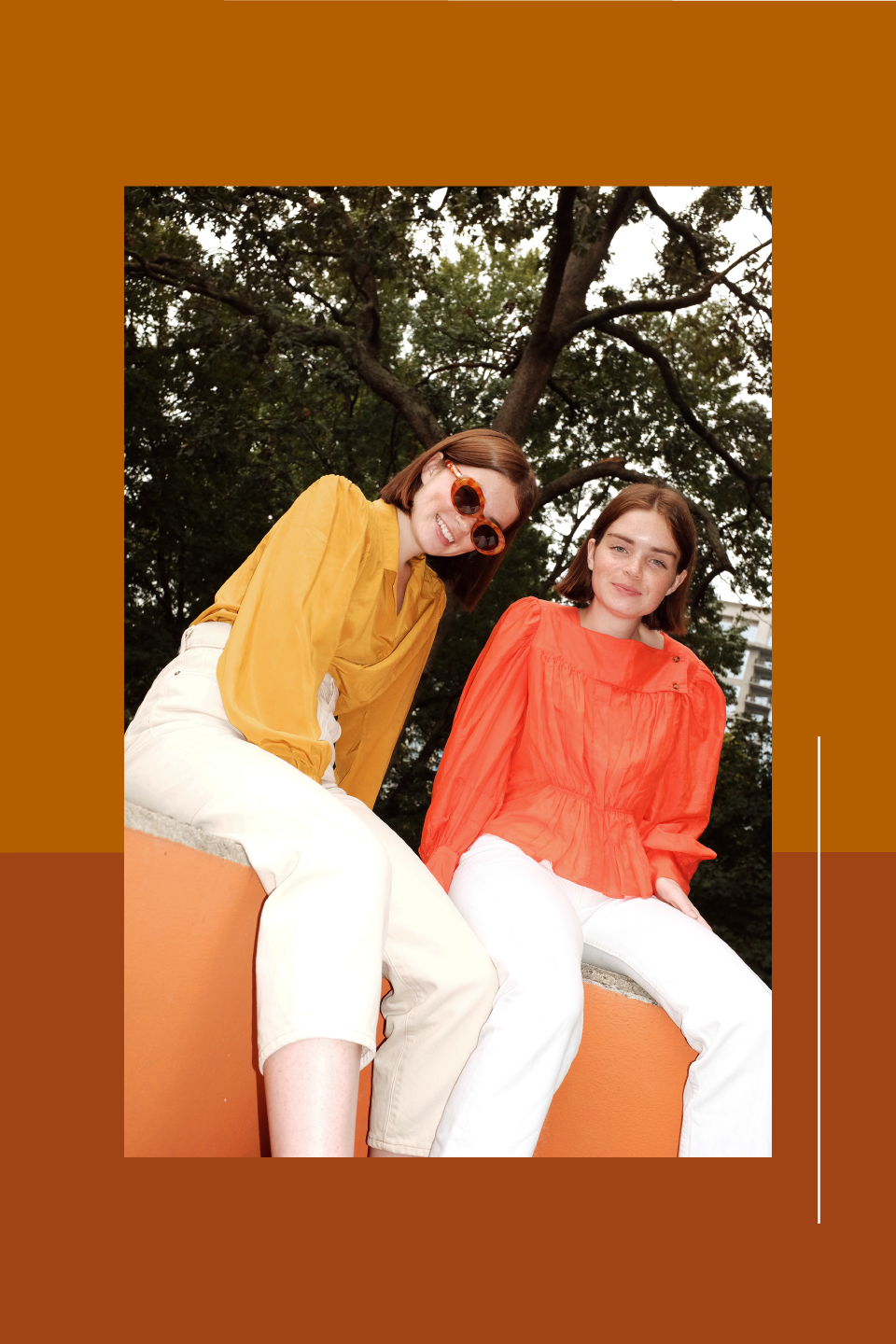 Reese: Ciao Lucia Allegra Top, $285, available at Ciao Lucia; Duo NYC vintage Levi's; Gray Matters Mildred Classic Verde, $396, available at Gray Matters; Molly: Vintage top; Levi's jeans; Crap Eyewear The Love Tempo Sunglasses, $58, available at Crap Eyewear.
“I was just telling my sister how sometimes I feel like I'm pretending I'm part of [the fashion industry,” Reese reveals, “but I don't actually feel [like I’m a] part of it in a way, because I am not sure what people really think of style bloggers. The fashion world isn't what I thought it was because it's not this big scary industry that you have to be perfect. Anyone who cares to be a part of it can be a part of it.”
Despite the slightly separate paths their social media lives have taken, the sisters insist their relationship hasn’t changed. “I guess what we talk about has changed, but we talk every single day,” Molly says. “I think because she has an Instagram, it’s a lot of what we talk about. She sends me her pictures all the time and I choose the ones I think are best for her to post. We just brainstorm ideas with each other. But I mean, she's extremely creative so she has her own thing, but I help her out.” 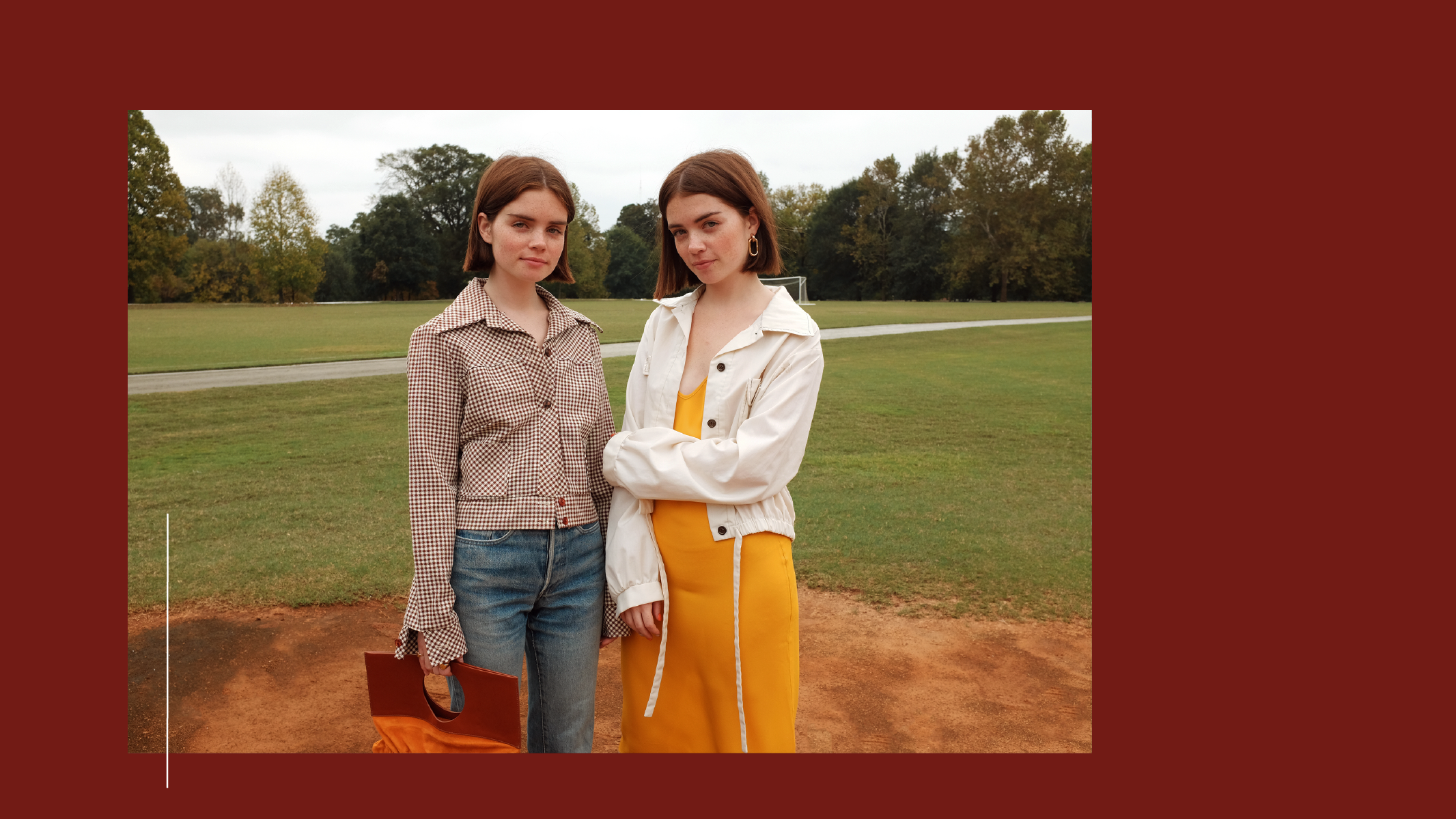 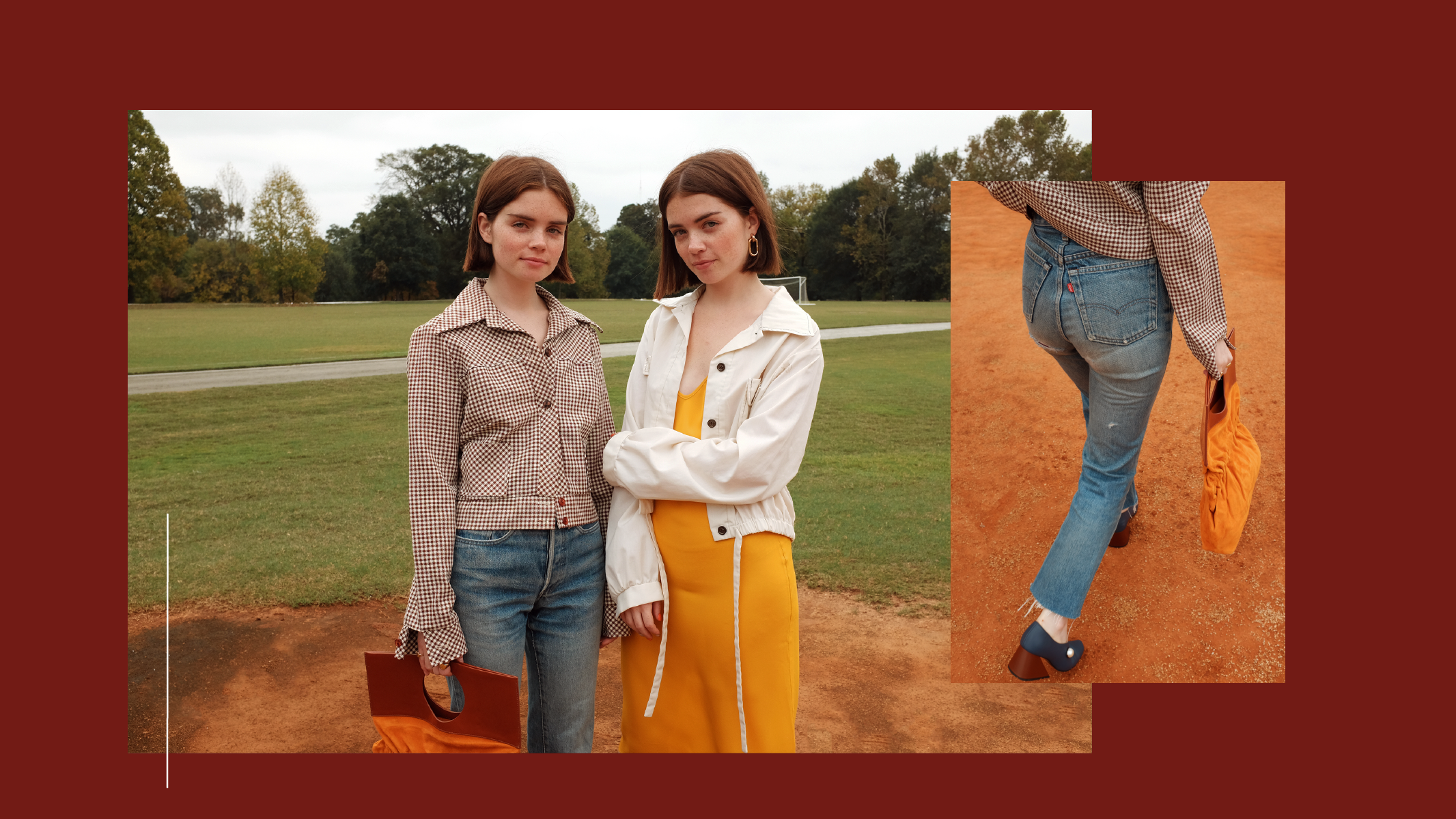 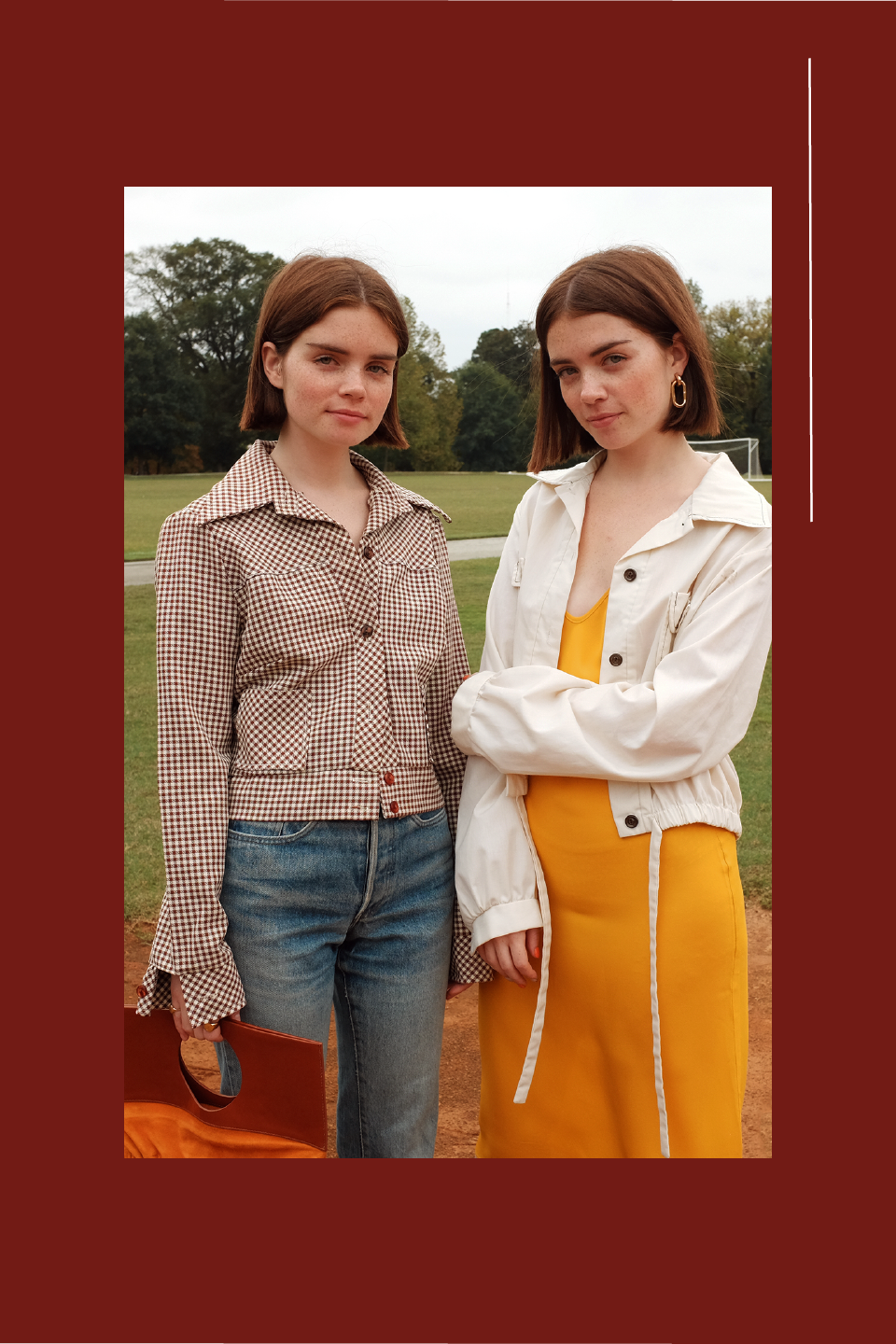 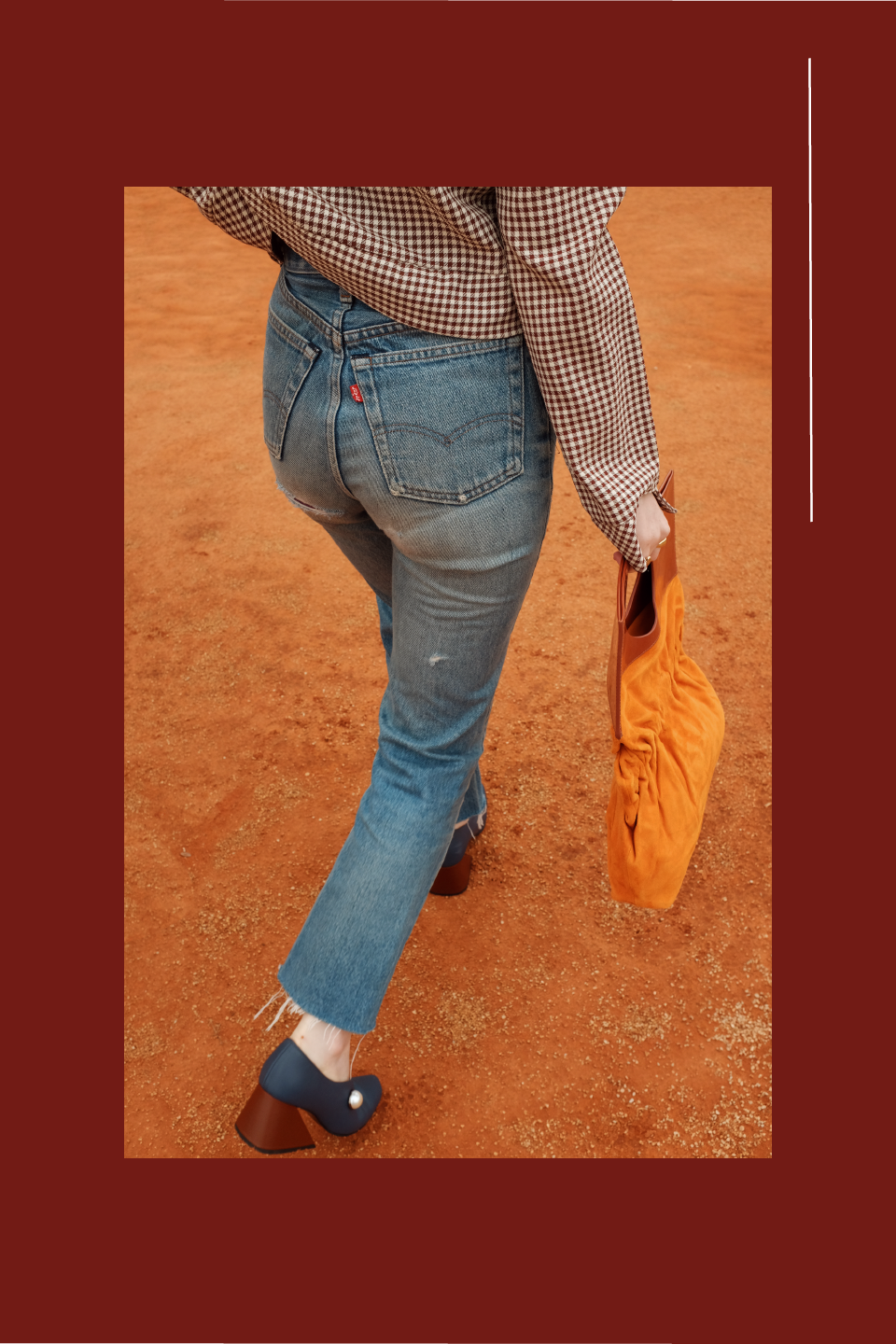 “My fans are like oh is she jealous?, but she's not like that. We’re not like that. It’s not like that at all,” Reese adds. “I think it’s exactly the same as it’s ever been. We’re just best friends.”
Advertisement
Unbothered
Micaéla Verrelien Shares 3 Tips On How To Evolve As A Creator
The misconception about being a successful influencer is that you have to tie yourself down to one specific niche in order to gain popularity. But thatR
by Venesa Coger
Fashion
Tinx Is In Her “Rich Mom Athleisure” Fashion Era — But Don’t Expe...
“Rich Moms love a monochrome moment, like a linen pant and a nice linen blouse. They love a bathing suit with a sarong over it and some amazing statement
by Irina Grechko
Unbothered
Olivia Joan Went Viral Highlighting Her Grandmother’s Fabulous Wa...
When it comes to sharing fashion content across multiple social media platforms, clothing hauls are a crowd favorite. Usually, it’s a person talking abou
by Venesa Coger
Advertisement
Unbothered
Rihanna Tells Us Why The IRL Savage X Fenty Experience “Wil...
When news broke that Rihanna had plans to open physical Savage X Fenty stores, many wondered what the shopping experience would be like. Its e-commerce sit
by Venesa Coger
Somos Latinx
In Celebration of Tatyana Ali’s ‘90s Fashion Looks
When The Fresh Prince of Bel-Air hit television screens on September 10, 1990, young viewers weren’t just howling with laughter at the smart humor of the
by Naydeline Mejia
Fashion
Kahlana Barfield Brown On Shopping Secondhand & Why Jeans Go With...
Style and beauty expert Kahlana Barfield Brown is an avid thrifter. If you follow her on Instagram, you know that her styling videos and fashion photos oft
by Venesa Coger
Celebrity Style
You Can Now Shop Carrie Bradshaw’s Fendi Baguette From A...
Update: Fendi has now re-issued Carrie Bradshaw’s famous purple, sequined Baguette bag, following the release of And Just Like That… on HBO Max
by Frances Solá-Sant...
Unbothered
What Black Creators Can Learn From Signed, Blake
S
by Venesa Coger
Style
This Reformation Dress Sold Out After Taylor Swift’s TikTok Debut...
Taylor Swift made her TikTok debut on Monday in a big way. First, she announced that Red (Taylor’s Version), the re-released edition of her 2012 album Re
by Eliza Huber
Style
Zoë Kravitz Wore The Perfect Summer Dress — & Yes, It’s Still Ava...
If you spent the entire weekend thinking about Zoë Kravitz and Channing Tatum’s rumored relationship after the two were spotted sipping iced coffees tog
by Eliza Huber
Beyonce
Beyoncé Channeled Audrey Hepburn In A 128-Carat Diamond Necklace
One of Breakfast at Tiffany’s most memorable scenes features Holly Golightly (Audrey Hepburn) singing Henry Mancini’s “Moon River” while strumming
by Frances Solá-Sant...
Style
Katie Holmes’ Latest Look Includes A J.Lo-Approved Quarantine War...
Like us, Katie Holmes wants to dress like J.Lo. This week, the Dawson’s Creek alum was spotted strolling through downtown Manhattan, wearing a black Cham
by Eliza Huber
Advertisement
Advertisement
Discover
R29 Stories & News
Watch
R29 Original Series & Films
Shop
R29's Most Wanted