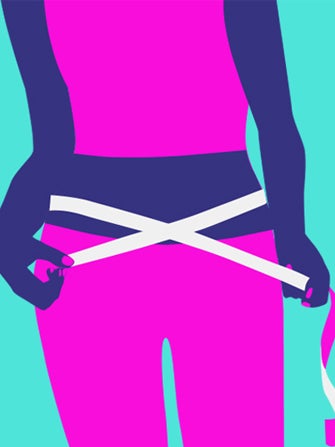 Illustrated by Austin Watts.
Each new year brings with it an onslaught of wellness resolutions. And, since many of these tend to focus on weight loss, it's the perfect time to re-examine our relationship to the art of dieting. Though the options are seemingly endless for those looking to change their eating habits, there's a common thread. For women, dieting is not just about sticking to a plan; it's about finding camaraderie with other dieters. But, as one writer points out, isn't there something regressive about a public campaign about one's weight loss? Isn't there something — dare she say it — anti-woman about bowing down to societal standards of what our bodies should look like?
Advertisement
Marisa Meltzer penned an essay for Elle.com in which she explores the inherent problem with dieting's relationship to feminism. On one hand dieting is something a woman does for herself, often for a combination of health and personal reasons. But, it can also suggest that she’s giving in to patriarchal standards of beauty. Naomi Wolf wrote her 1991 classic, The Beauty Myth that “a cultural fixation on female thinness is not an obsession about female beauty, but an obsession about female obedience. Dieting is the most potent political sedative in women’s history; a quietly mad population is a tractable one.” Meltzer explains, "good feminists, in short, do not diet. Or, if they do, they don’t talk about it." And, so for a long time, she kept her dieting a secret in the name of sisterhood.
Meltzer was raised a feminist (think: a childhood protesting the Miss California pageants) and she was concerned that her desire to diet was an anti-feminist choice. As a result, she didn't tell her friends. "I flirted with fat acceptance, tried to believe that weight should not define who I am, that beauty comes in different packages. But, the truth was that I was neither healthy nor happy."
Looking for guidance on the subject, Meltzer sought out Wolf to see if her vision had altered over the past 22 years. And, the author had some excellent advice: “Feminism often gets into an unappealing cul-de-sac where there’s this set of practices or beliefs that you have to be part of to be a good feminist. Interestingly, that’s not very different from more conventional forms of social policing. I don’t think there’s anything wrong with taking care of your body. I just want to know you’re feeling beautiful and important at whatever weight you want.” So, while dieting for someone else's happiness (say a husband or partner) is decidedly anti-feminist, dieting for yourself in an effort to feel happier and healthier is truly embracing feminist principles.
The perfect example of this is our own Kelsey Miller's Anti Diet Project. She's committed to being healthy, but she's not gonna sacrifice the things she loves to do it. And, to those who want to take on wellness in 2014, we say, get it girl. (Elle)
29Rooms
29Rooms Is Back; Here’s How To Attend Safely
Over the past year and a half, we’ve missed many opportunities to attend concerts, festivals, parties, and hangs. And although restrictions have loosened
by R29 Brand Experie...
Somos Latinx
Dear Miya Ponsetto, You Can Be Latinx & Still Be A Karen
Miya Ponsetto, the white woman dubbed as “SoHo Karen” on social media, was forcibly arrested in California yesterday. Her arrest comes after sh
by Jasely Molina
Food & Drinks
Is A Bagel Really A Bagel If It Isn’t In NYC?
by Elizabeth Buxton
Advertisement
New York
We Dig This NYC Dim Sum
by Camille Coklow
Beauty
The 17 Most Epic NYC Massages
by Kayla Jacobs
Movies
11 Movies Perfect For A Glorious Snow Day
by Vanessa Golembewski
New York
You HAVE To Try The Avocado Toast At These NYC Restaurants
by Elizabeth Buxton
New York
The Absolute Best Spots To Slurp Ramen In NYC
by Zoe Bain
New York
The NYC Rooftops You Need To Hit This Summer
by Elizabeth Buxton
Beauty
The Best Cheap Haircuts In New York City
Choppa style, for cheap.
by Liesa Goins
New York
The Indie Bride-To-Be’s Guide To Dress Shopping In NYC
by Ashley Castanos
New York
Is This Really What The NYPD Thinks About Rape?
NYPD captain Peter Rose has angered rape advocates after saying “acquaintance rape” cases are not as serious as rapes committed by strangers.DN
by Shannon Carlin
Advertisement
Advertisement
Discover
R29 Stories & News
Watch
R29 Original Series & Films
Shop
R29's Most Wanted