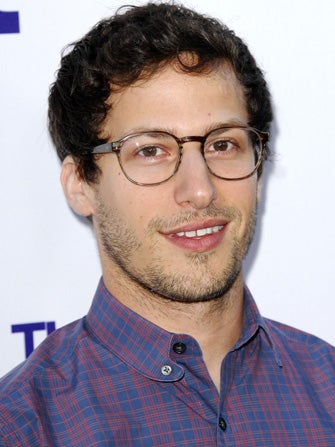 Photo: REX USA/Picture Perfect
Andy Samberg always dreamed of being on Saturday Night Live, and lo and behold, that’s where he wound up in 2005. But last year, he left the show (yes, we're holding back tears) to pursue opportunities elsewhere. A few indie movies, and a bomb at Sony, (That’s My Boy) later, and now he’s starring in his brand new sitcom, Brooklyn 99.
So what’s a "not-ready-for-primetime" player doing in primetime? We asked him.
Do you have a lot of input on the set of Brooklyn 99? "In this case, because I have a producer title, I have some input. I generally wait for our incredibly talented writers to get through a few drafts of what they’re working on and get notes from the network before I chime in, though, because it’s all going to change anyways. So far, the most [where] I’ve been giving creative input is on set and then between takes, I’ll pitch new jokes or different ways that we can maybe take a scene. It’s been really fun so far."
Advertisement

Do you have to rein in your humor for primetime?

"You are talking to a guy who shot a music video about dicks in boxes. It’s pretty tame for me. Things have gotten so much more lax since I was a kid. The things you can do on a primetime networks now…it’s a lot dirtier. I don’t think it’s going to be a problem and the writing staff is so seasoned, clever, and silly. You can’t curse, that’s the main one. But you can bleep in primetime now. Outside of that, there’s really not much left."

How hard was it to leave SNL?

"I wanted to be on Saturday Night Live since I was eight years old. That was my dream. As soon as I saw it, I was like, 'I’m going to be a part of that, I don’t know how, but I’m going to try to figure it out and find a way.'"

So you were pretty driven. "Frankly, I didn’t think SNL was going to happen. 'Cause I didn’t do Groundlings or Second City or any of that stuff. I did some standup, which I loved, but mostly I was doing writing with [friends] Akiva [Schaffer] and Jorma [Taccone] and doing our website and our films and stuff, which ironically ended up being what we did on SNL. But when we got hired, that wasn’t the plan or anything. We got lucky. We met people and ultimately that was what got us the job — writing on the movie awards on MTV when Jimmy Fallon hosted. And we were splitting one writer’s paycheck, I think it was four to 500 bucks split three ways before taxes. We met everyone who worked at SNL and they recommended us to Loren [Michaels] and then all of a sudden, we were there auditioning and got hired and it was just insane."
So why did you leave? "I just knew that it was time for me to go. I was just exhausted. We officially made like 101, 102 digital shorts, but we actually made 120, 130, and that was doing that every week on top of the show, which everyone already describes as the most grueling schedule in comedy. So, we were basically doing like two shows a week every week. Not sleeping. I just got worn out. It was definitely the hardest decision I’ve ever made in my career. SNL is the biggest thing that’s ever happened to me, still. I definitely wanted to make movies. I did do two. I like how both turned out. I want to do more. I’ve done some voice-over in animated movies. I made a show for the BBC in England, which was a lot of fun and maybe we’ll do more than that. As long as I’m doing things that I think are good and generally doing things that I think are funny, I feel like I’m doing okay."
Food & Drinks
Is A Bagel Really A Bagel If It Isn’t In NYC?
by Elizabeth Buxton
New York
We Dig This NYC Dim Sum
by Camille Coklow
Beauty
The 17 Most Epic NYC Massages
by Kayla Jacobs
Movies
11 Movies Perfect For A Glorious Snow Day
by Vanessa Golembewski
New York
You HAVE To Try The Avocado Toast At These NYC Restaurants
by Elizabeth Buxton
New York
The Absolute Best Spots To Slurp Ramen In NYC
by Zoe Bain
New York
The NYC Rooftops You Need To Hit This Summer
by Elizabeth Buxton
Beauty
The Best Cheap Haircuts In New York City
Choppa style, for cheap.
by Liesa Goins
New York
The Indie Bride-To-Be’s Guide To Dress Shopping In NYC
by Ashley Castanos
New York
Is This Really What The NYPD Thinks About Rape?
NYPD captain Peter Rose has angered rape advocates after saying “acquaintance rape” cases are not as serious as rapes committed by strangers.DN
by Shannon Carlin
US News
Why This New York Subway Mural Of A Gay Couple Is So Important
The New York subway system is making headlines this week, with the opening of its long-awaited Second Avenue line. One of the new stations along that line
by Sabrina Rojas Weiss
New York
7 Last-Minute Places To Eat Out If You’re In NYC On Thanksg...
For some New York City residents, “heading home for the holidays” means taking the 1 train back uptown to a tiny apartment and cooking a festiv
by Elizabeth Buxton
Discover
R29 Stories & News
Watch
R29 Original Series & Films
Shop
R29's Most Wanted