Skip navigation!
Story from Style
Photo: Victor VIRGILE/Gamma-Rapho/Getty Images.
In fashion, there are a few items that will never be considered stylish. At the top of that list are leggings. Sure, people in fashion wear them, but more so in a last-minute-errand, stay-at-home sort of way. That being said, this year sparked a lot of changes, including ones in fashion. We didn’t think celebrities would be caught dead wearing sweatpants with a blazer or tracksuits with heels, but, in 2020, it works. Same goes for leggings. Or rather, leggings with stirrups — a distinction that is of the utmost importance. With a potential second wave of COVID-19 on the way, comfort is likely to continue being a key trend throughout the remainder of the year and into 2021. And since there’s no sartorial item more comfortable than leggings, the recent uptick of stylish alternatives comes as a welcome surprise.
Advertisement
Photo: Kristy Sparow/Getty Images.
Photo: Victor VIRGILE/Gamma-Rapho/Getty Images.
We first saw stirrup leggings — originally created as pants for equestrians — at Jacquemus’ fall ‘20 menswear show, which occurred just a few weeks after the first cases of COVID-19 were reported. Of course, Simon Porte Jacquemus couldn’t have predicted that an alternative to leggings would be so practical in the coming months when he was designing the collection. But we’re glad he had the foresight to create them anyway. At the show, Jacquemus styled a pair of oatmeal-colored, ribbed stirrup leggings with a knit bra top (another fashion trend to come out of lockdown), an oversized, linen blazer, and strappy sandals. The model wore a bandana and two handbags: a white belt bag and a pistachio green mini bag. It was glorious. I wasn't alone in thinking that: The leggings, named the Albi, sold out completely following their release earlier this fall. Later that fashion season, during Paris Fashion Week in February, another designer introduced a version of the stirrup legging for a covetable fall look: Isabel Marant's show saw an ‘80s-inspired pair of leggings, which were black and paired with plain black pumps and a black leather jacket.

A season later, the style has only garnered more recognition, likely in part because of the sudden need for clothing that checks off the comfort box. In August, Courtney Trop, an L.A.-based blogger, styled a pair of black Simon Miller stirrup leggings with patent leather platforms and a crinkled coat. Later, during spring ‘21 fashion week in Paris, fellow blogger Camille Charriere wore a pair to dance on a pole at a Roger Vivier event, proving that moveable stretch fabric does indeed have a place in fashion. (For the occasion, she styled her leggings with loafers and an hourglass-shaped blazer.) Géraldine Boublil (Erin Off Duty) wore a pair for Miu Miu’s runway show, while Norwegian influencer Rikke Krefting styled hers with lug sole loafers and a long, camel coat.
Advertisement

But the resurgence of stirrup leggings in 2020 didn’t arrive completely out of the blue, nor can we give all the credit to the pandemic for its sudden popularity. In 2016, the trend experienced a minor spike due to Demna Gvasalia, creative director of Balenciaga. At the fall ‘16 show, the designer introduced a stirrup pant, which, too, soon became a favorite among street style stars. During fall ‘17 men’s fashion week a year later, the likes of Pernille Teisbaek and Tamu Mcpherson wore their leggings over their heels, rather than under it, while out on the streets in Milan and Paris — a look we now wouldn't hesitate to recreate.
Among the front-runners in today’s stirrup legging market are pairs by Monse, Altuzarra, Low Classic, and The Marc Jacobs. Lourdes, Wardrobe.NYC., and Paco Rabanne are also offering fashion-forward iterations on this once-contentious fad. See them all by clicking through our favorite stirrup leggings for fall below.
At Refinery29, we’re here to help you navigate this overwhelming world of stuff. All of our market picks are independently selected and curated by the editorial team. If you buy something we link to on our site, Refinery29 may earn commission.
shop 7 products 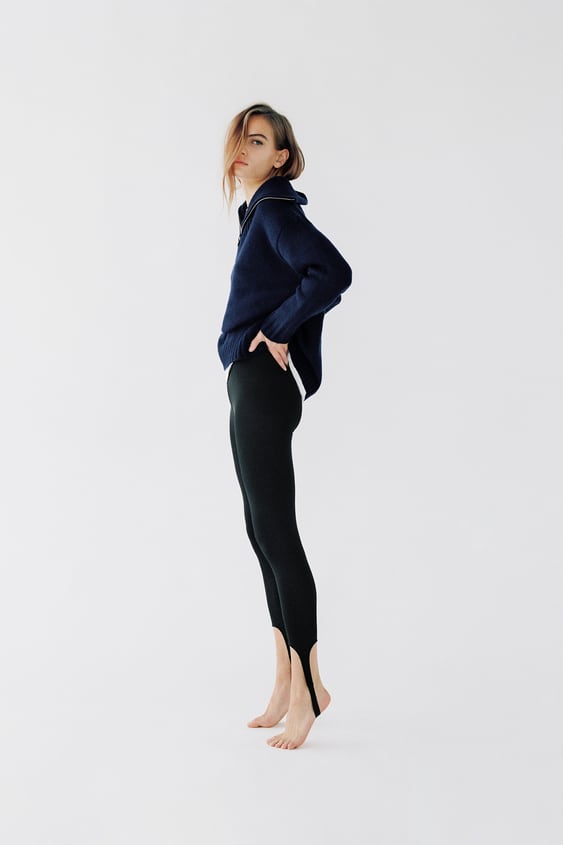 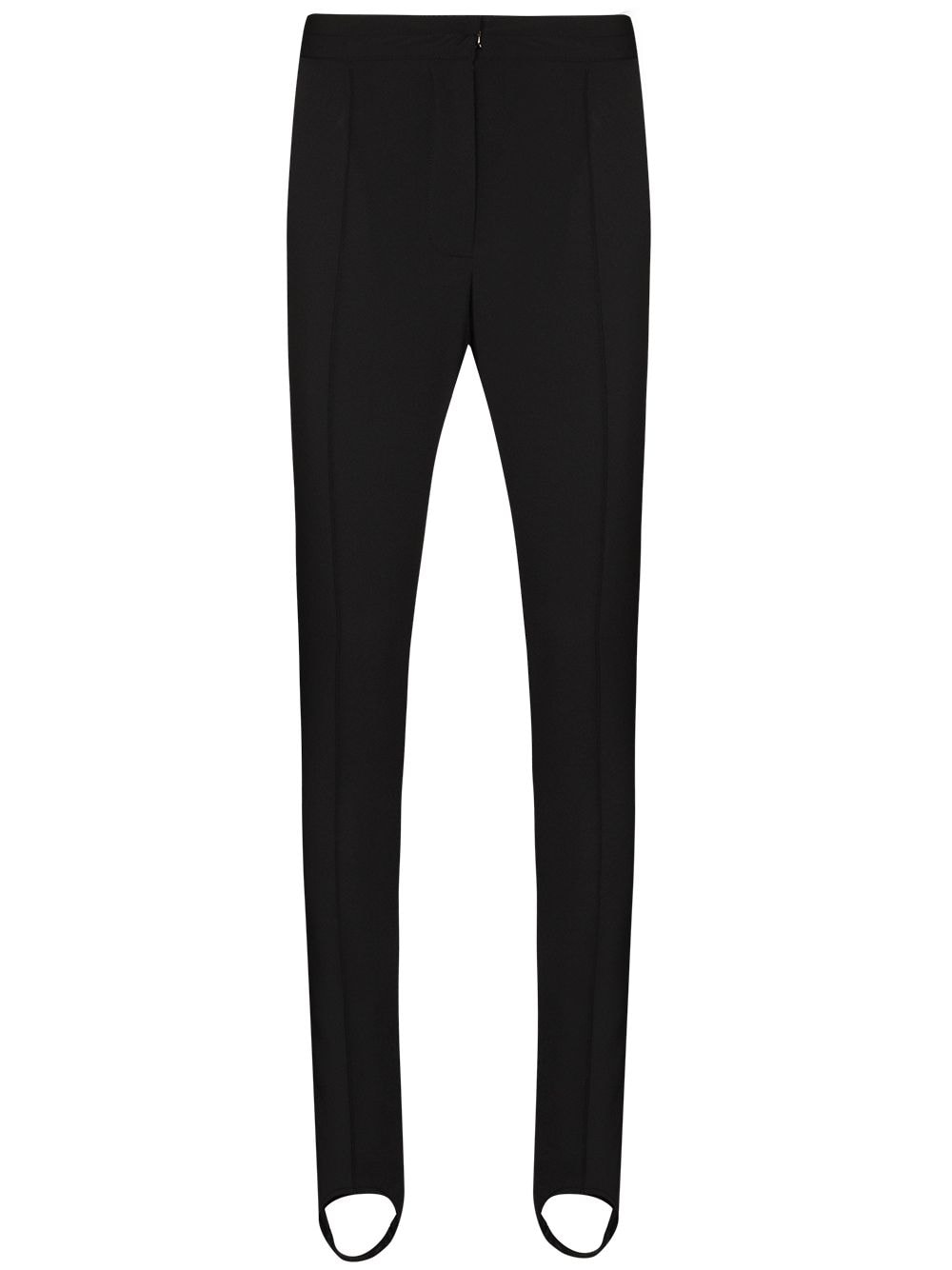 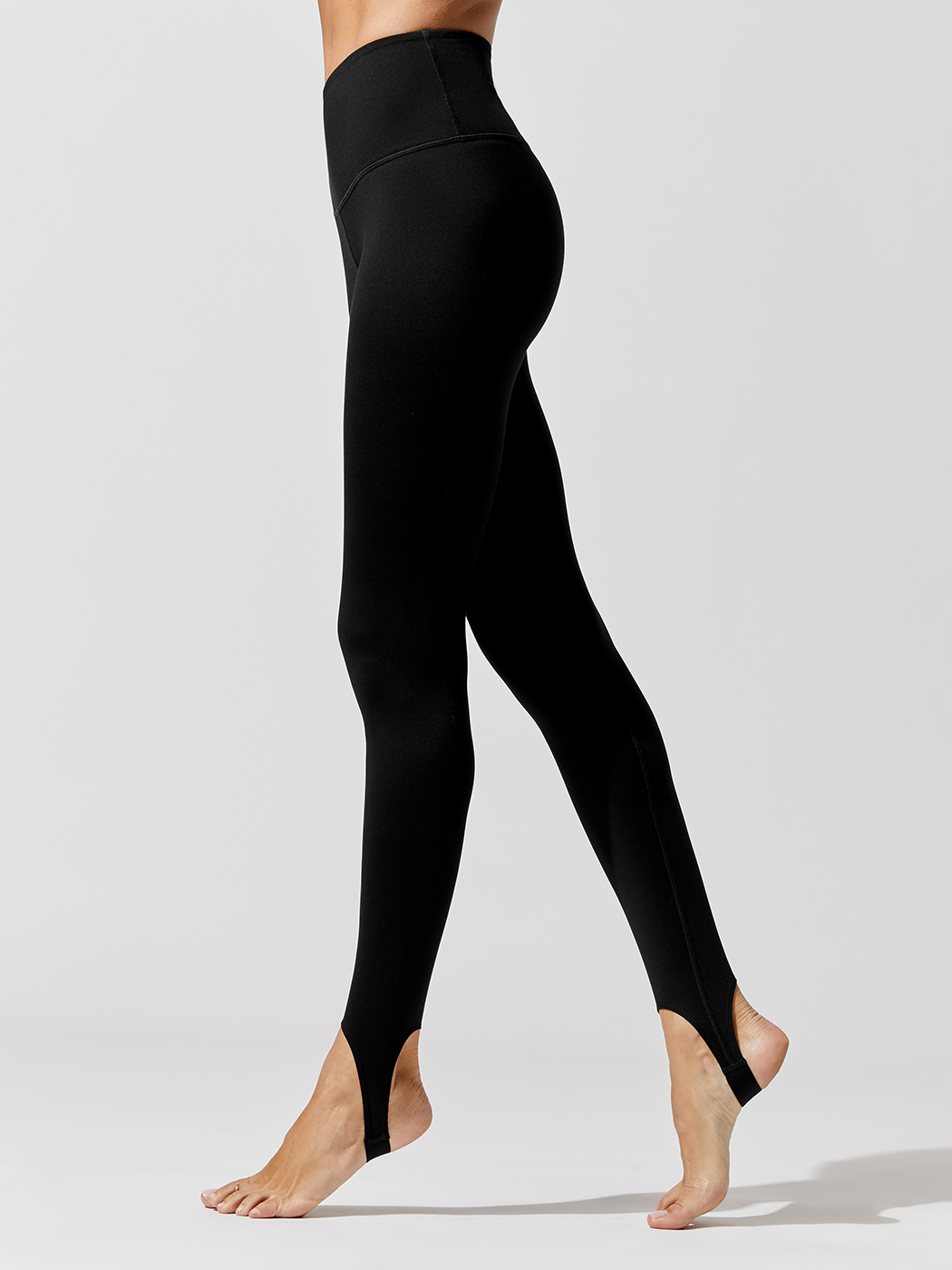 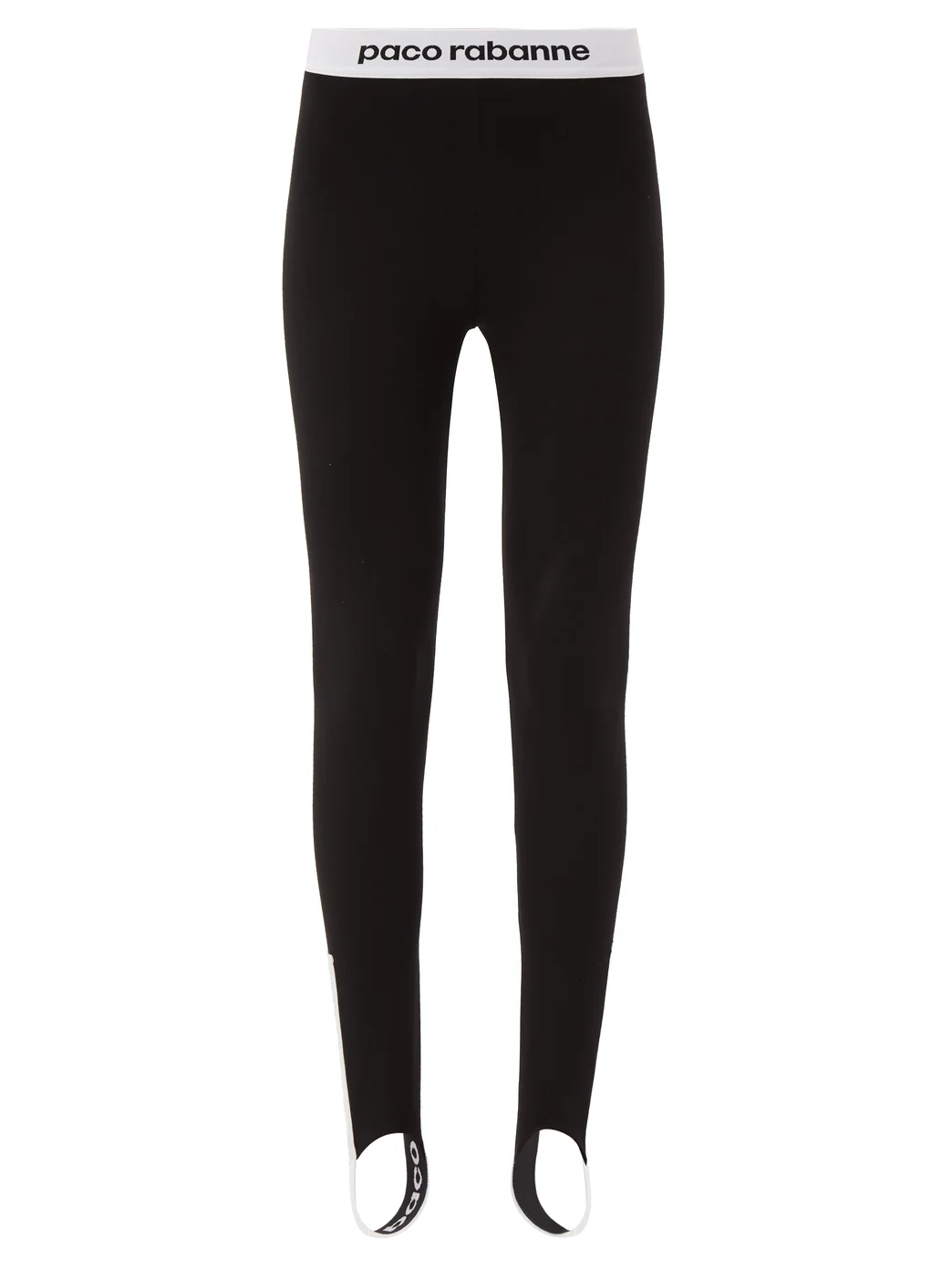 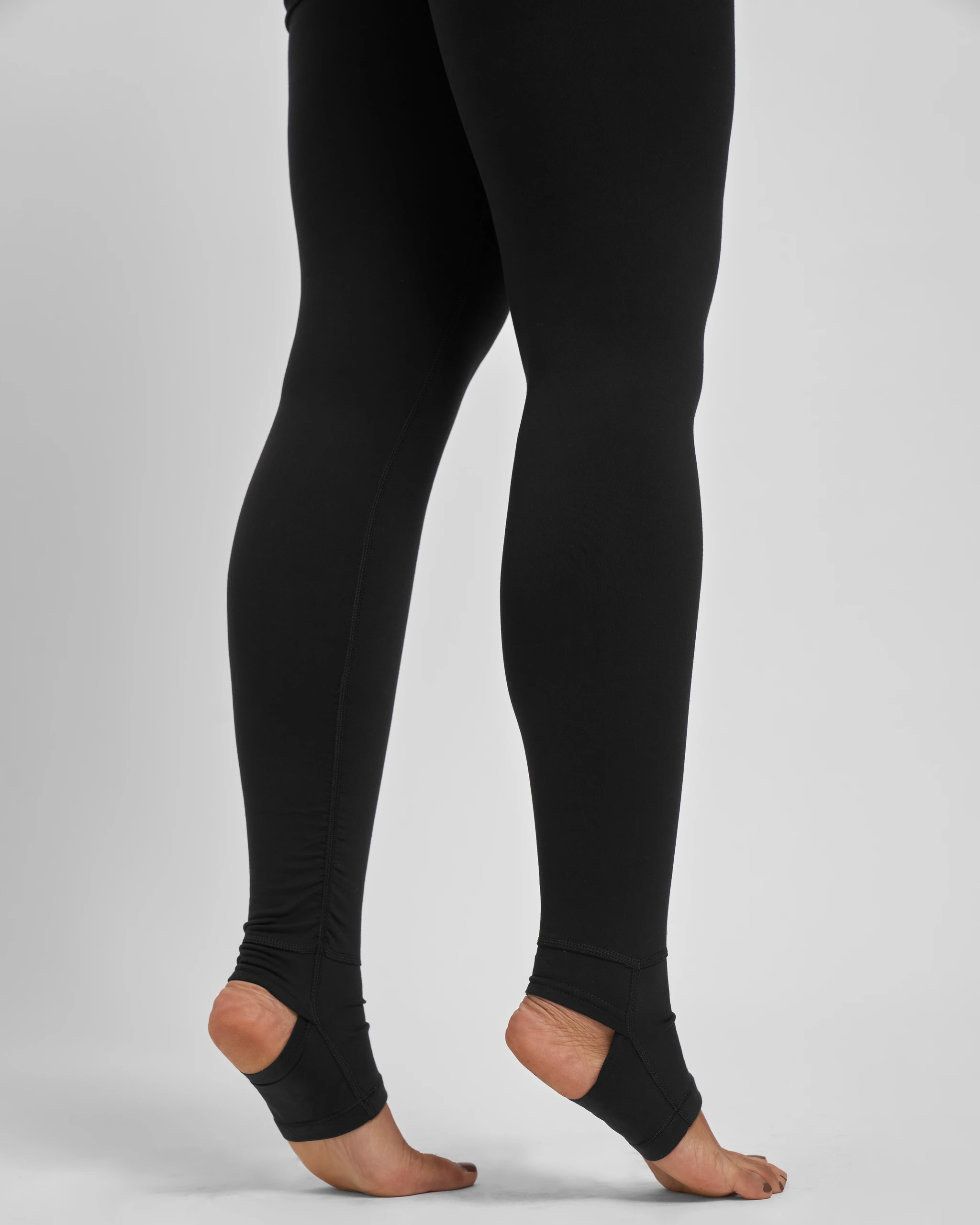 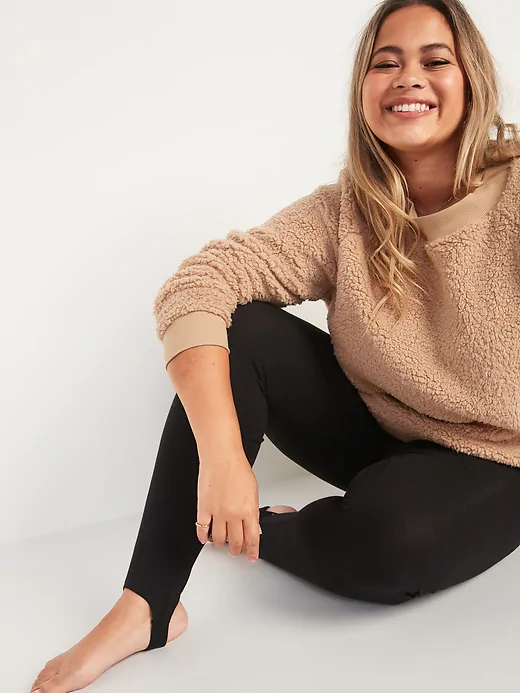 Old Navy
High-waisted Plus-size Stirrup Leggings
$23.99
Old Navy
Style
My Week In Whale Tails: What It’s Really Like Wearing A Visible T...
The whale tail is back. Need proof? In December, Beyoncé appeared in British Vogue clad in a red Christopher John Rogers gown and a coordinating G-string.
by Eliza Huber
Style
Low-Rise Jeans Are Officially Back. Who Will Be Wearing Them?
“I was in college in the early ‘00s and I think I still have PTSD from my low-rise Juicy Couture sweats and my two-inch-zipper Diesel and Chip & Pepper
by Eliza Huber
Style
The Guide To All The Summer Dresses Going Viral On TikTok
by Eliza Huber
Advertisement
Style
Upside-Down Bikinis Are Trending — Here Are 16 Styles To Get You ...
by Eliza Huber
Fashion
Skorts Are Popular On TikTok. Here’s Why
Generation TikTok has discovered skorts, and now the skirt-shorts hybrids — ranging from sporty tennis styles to preppy, pleated versions — are everywh
by Sara Radin
Style
“Pillow Sandals” Are Trending — Here Are The Most Pop...
If you have struggled to find the middle ground between lockdown loungewear and full-blown party attire in the wake of nationwide reopenings, this rising f
by Eliza Huber
Style
So, How Is It Really? Wearing A Bridgerton-Inspired Corset
Ever since Netflix released Bridgerton, the Regency-era drama has not only kept us glued to the TV — in its first month on Netflix, the show reached 82 m
by Eliza Huber
Style
What Does The Perfect Party Dress Look Like?
After a year away from parties and celebrations, our return to social events is imminent, which means that it’s time to start thinking about what we’re
by Eliza Huber
Style
Cut-Outs Were The Biggest Red Carpet Trend At The Billboard Music...
On Sunday night, the 2021 Billboard Music Awards brought together Doja Cat, Alicia Keys, P!NK, the Jonas Brothers, and more for a night of music. While wal
by Eliza Huber
Style
Tarzan Bottoms Are Summer’s Biggest Swimwear Trend. Here Are 23 T...
by Eliza Huber
Best Wedding Dresses
Bridgerton Gowns & Party Dresses Are 2021’s Biggest ...
Season after season, little changes in wedding fashion. After all, white wedding gowns have long been the standard. The last year, though, saw the rise of
by Eliza Huber
Style
Finally, It’s In Fashion To Be A Horse Girl
If you don’t know a horse girl, aren’t one yourself, or haven’t seen one on throwback TV shows like Wildfire, horse girls are, simply put, girls who
by Eliza Huber
Advertisement
Advertisement
Discover
R29 Stories & News
Watch
R29 Original Series & Films
Shop
R29's Most Wanted