Skip navigation!
Story from Beauty
Nicole walked into a northern Virginia nightclub ready to party. She was dressed to the nines, in her highest heels, a tight-fitted dress, and a padded bra. As she danced through the crowd, she introduced herself — in the hyper-feminine voice she'd spent months practicing — as a 21-year-old woman from Connecticut. It was the first time she publicly used she/her pronouns. And, much to her surprise, people totally bought it.
The story wasn't entirely true, of course. At the time, "Nicole" was actually a 16-year-old trans woman and YouTube makeup artist named Nikita Dragun — who, in that moment, realized that she "passed" as the gender she identifies with. For so many people in the throes of the isolating, scary, and often dangerous process of transitioning, this passing stage means validation, acceptance and relief. More than anything, though, it means survival. Just this year alone, more than 300 trans people across the globe, the majority of whom were women, were murdered in hate crimes.
Advertisement
"People often fear what they don't understand, and attack what they fear," says Gabrielle Hermosa, public speaker, human rights advocate, and trans woman. "Not passing can be very stressful, debilitating even. Those of us who do not enjoy passing privilege draw more unwanted attention and judgement in public."
Adds Dragun, "It took me a while to get to this stage because the fear of being 'clocked' — when someone misgenders you or outs you — was too scary. Once I accepted that yes, that will happen at some point, I was able to feel more comfortable."
More Than A Passing Phase
For trans women, there's far more that goes into "passing" than just changing your clothes or cosmetics. Many turn to laser hair removal, breast augmentation, facial feminization procedures, tracheal shave surgery, and hormone replacement therapy (HRT). Because most insurance providers don't cover a full gender transition — which can cost up to $100,000, Hermosa says — getting there on your own requires a massive financial investment that can take years.
The first step for many trans women is wearing makeup, but because of how gendered that world is, it's not as easy as just walking into a Sephora. "There is a huge stigma behind makeup, that it's just for one gender, and most of my clients feel judged if they shop for it in store because they aren't fitting the stereotype of people who wear makeup," says Jessica Blackler, makeup artist and founder of Jecca, a line designed specifically with trans people in mind.
Advertisement
On top of that, most of the tutorials and advice out there are created specifically to flatter already-feminine features. "At first, makeup was a bit disheartening since my face was so masculine," says Brooke Dangler, a transgender woman in her first year of HRT. "But I've started to enjoy it more as I've softened over time and started to develop my look."
Most commonly, the biggest struggle is facial hair growth — and how to remove it or cover it before or during hormone replacement therapy (HRT). Even with multiple rounds of laser hair removal or electrolysis, complaints of stubble or a five o'clock shadow are consistent. Dragun says she used orange correctors underneath her foundation to cancel out the undertones in the beard area. "It was very stressful worrying about facial hair when trying to be passable — I always kept a razor nearby in case I needed to touch up," adds Erin Kettl, a trans woman and the executive director of TRANScending Barriers Atlanta. "Now I love not having to worry about it. Every guy I have ever talked or been intimate with has always rubbed my face. I think it's a subliminal thing men do to see how smooth and woman-like a trans woman is." 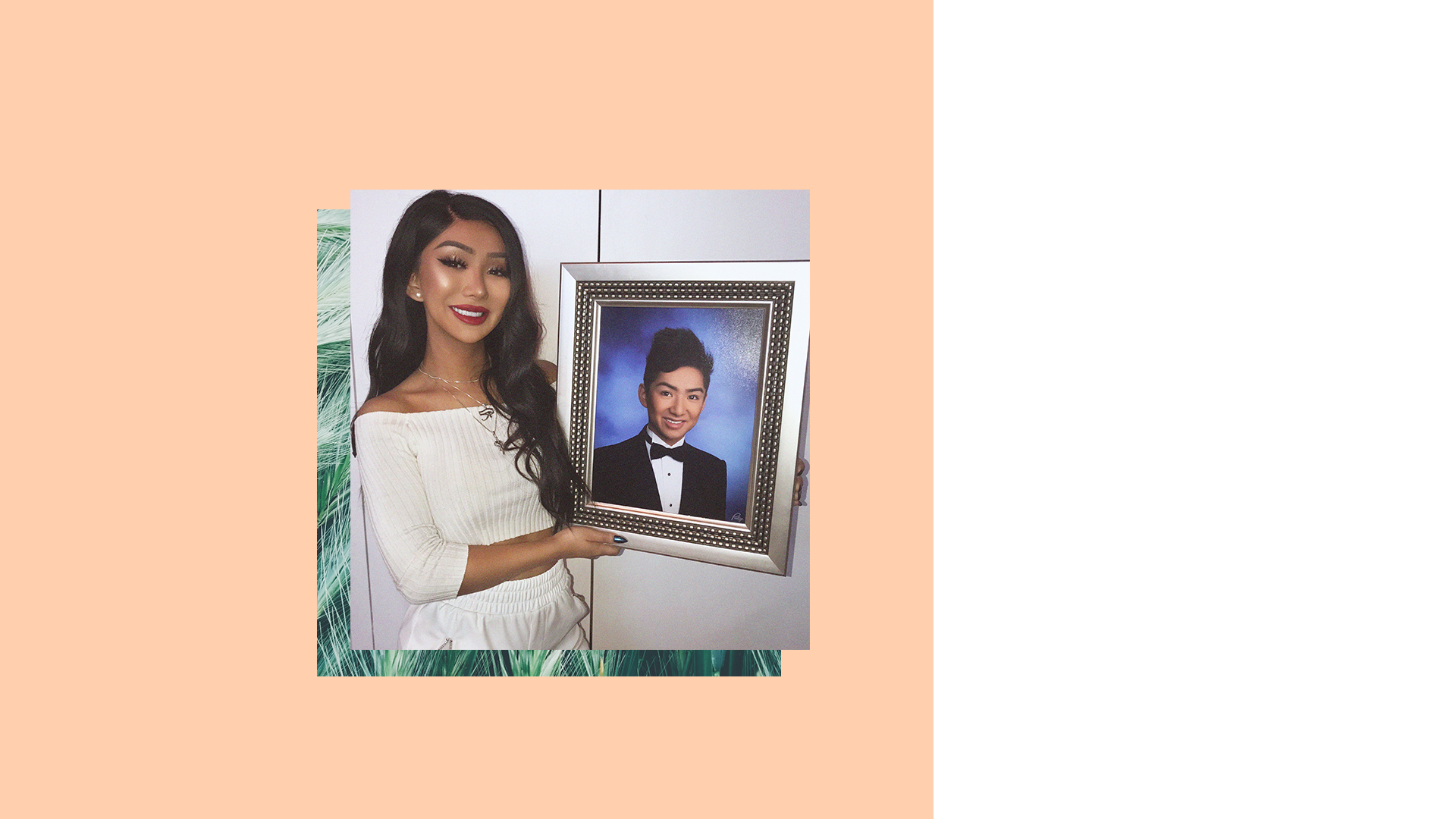 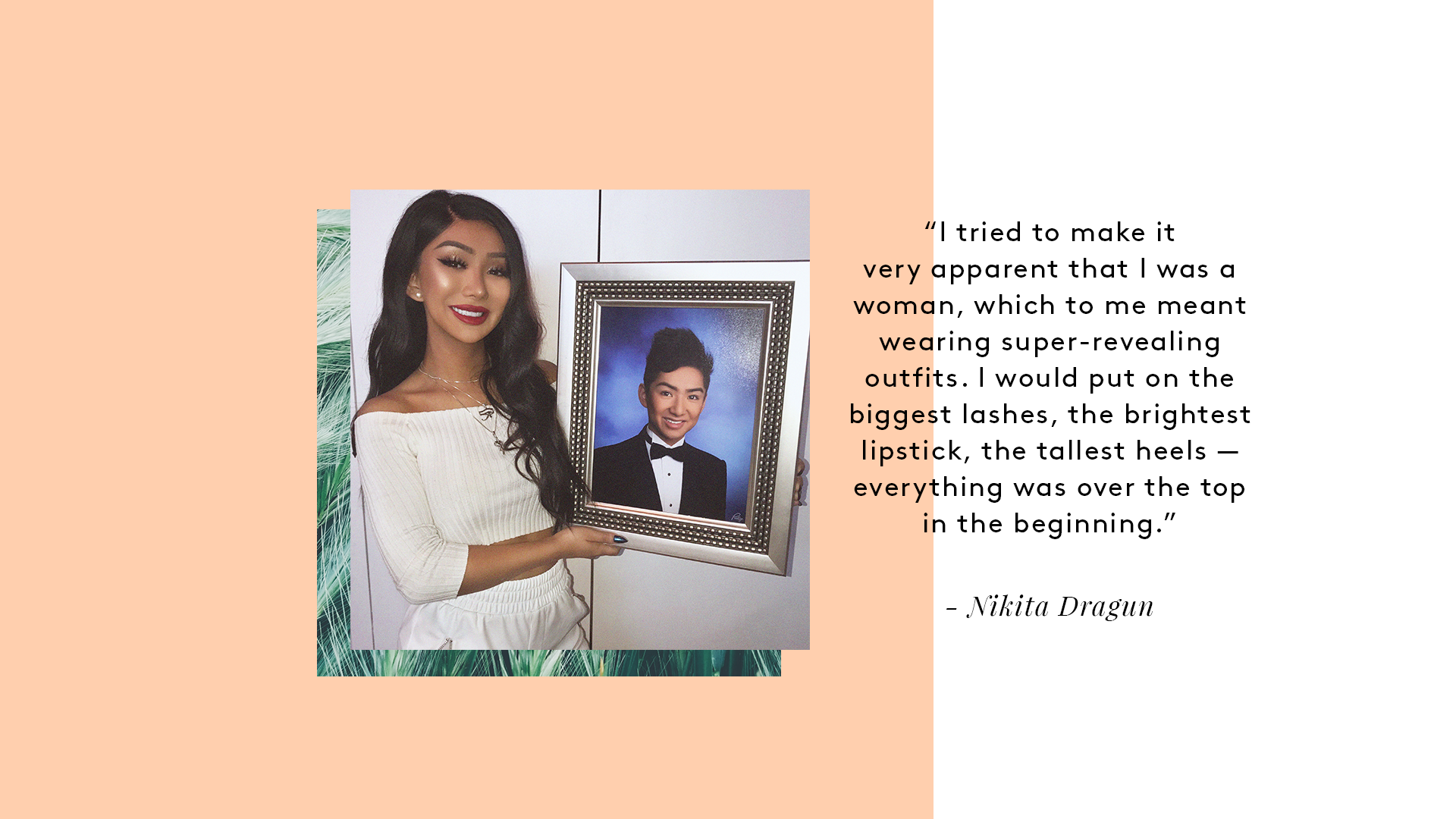 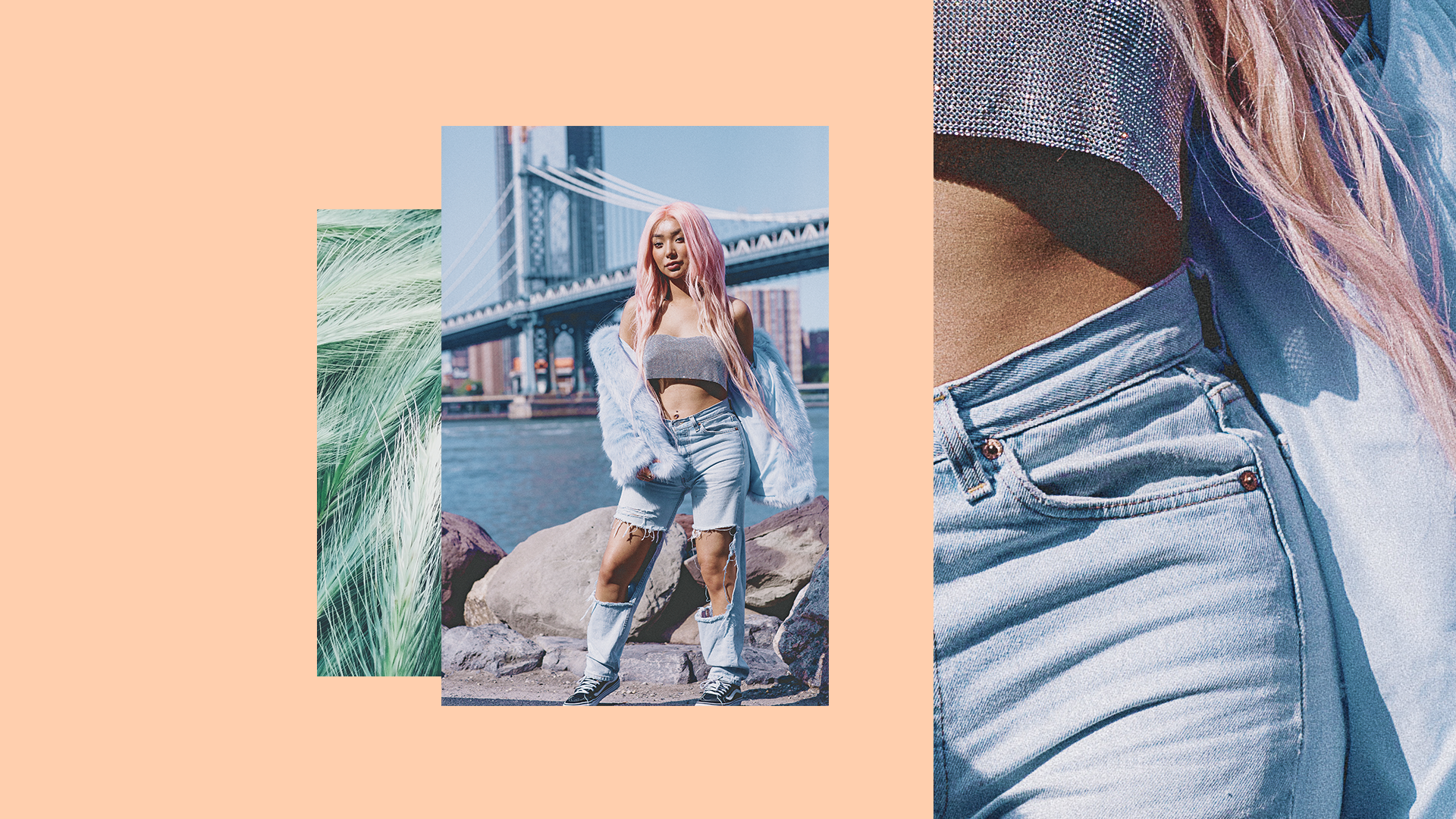 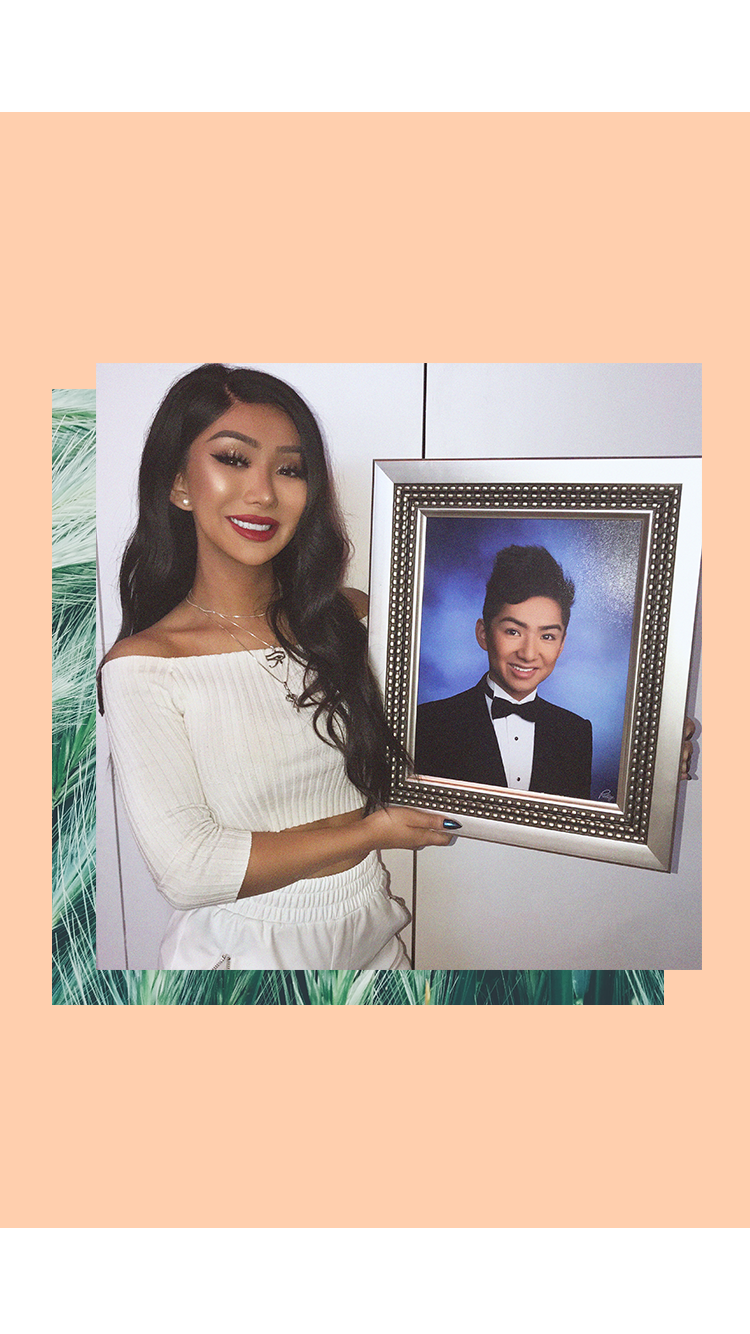 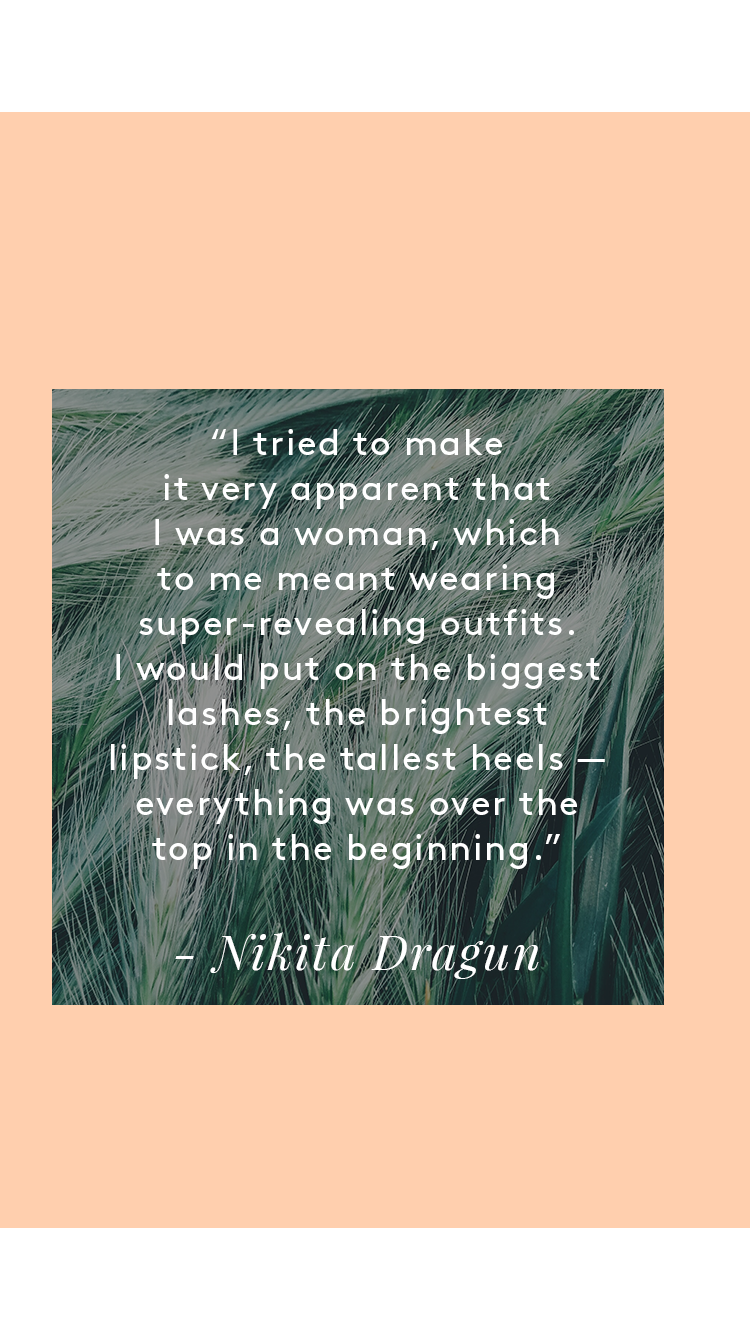 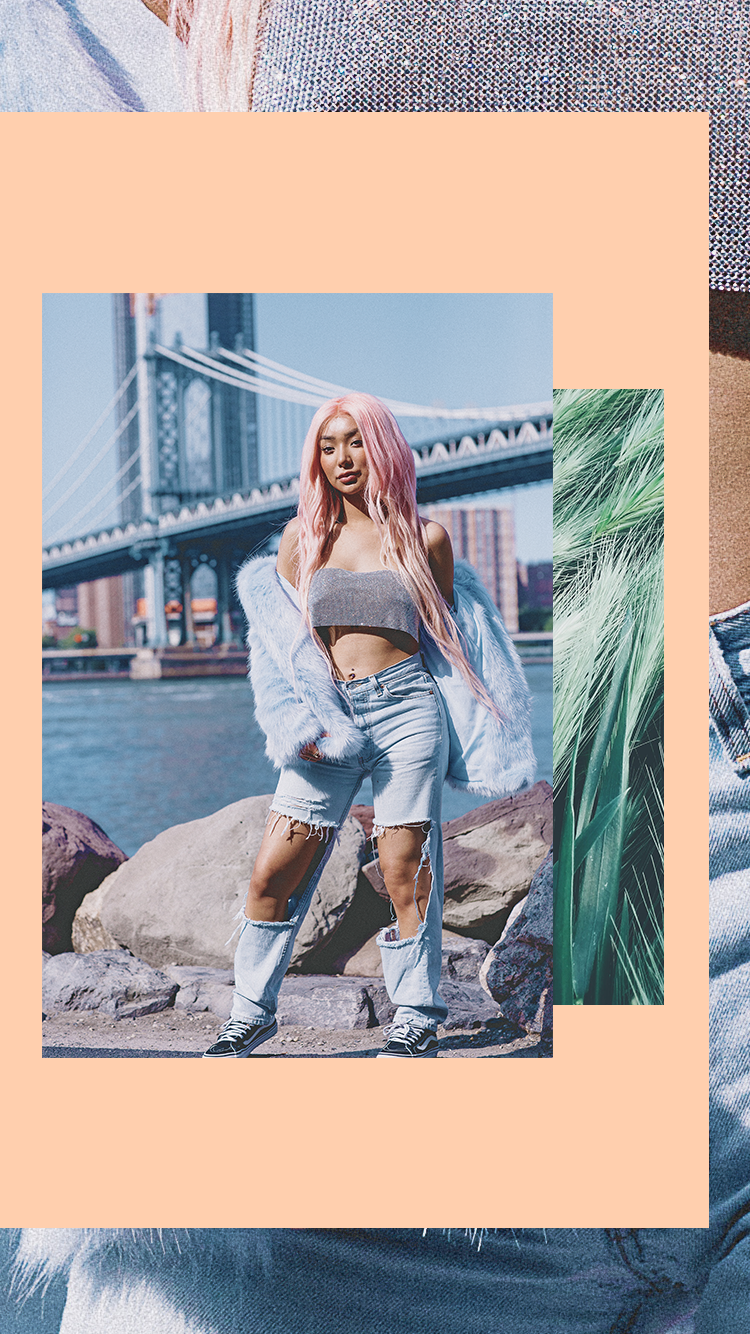 Facing The "In Between"
After makeup and before invasive surgery, many trans people will turn to a highly precise cocktail of fillers and Botox to make their features more feminine or masculine. "Most transgender people do not want to look in-between," explains Dr. Alexander Rivkin, MD, a cosmetic surgeon in Los Angeles. "We use Botox to reduce muscles of the jaw and minimize a heavier brow; fillers to change the shape of the cheeks, nose, and chin, as well as to round out a flat forehead. All of these tweaks make a big difference."
Advertisement
Dangler is undergoing non-surgical feminization with Dr. Rivkin, and has just begun seeing the cumulative effectives of the procedures. "There are times I barely recognize my old face," she says. "I instinctively gasp at the mirror and start laughing — that reflex-like feeling is the best in the world, because I know that I'm doing what's right for me." 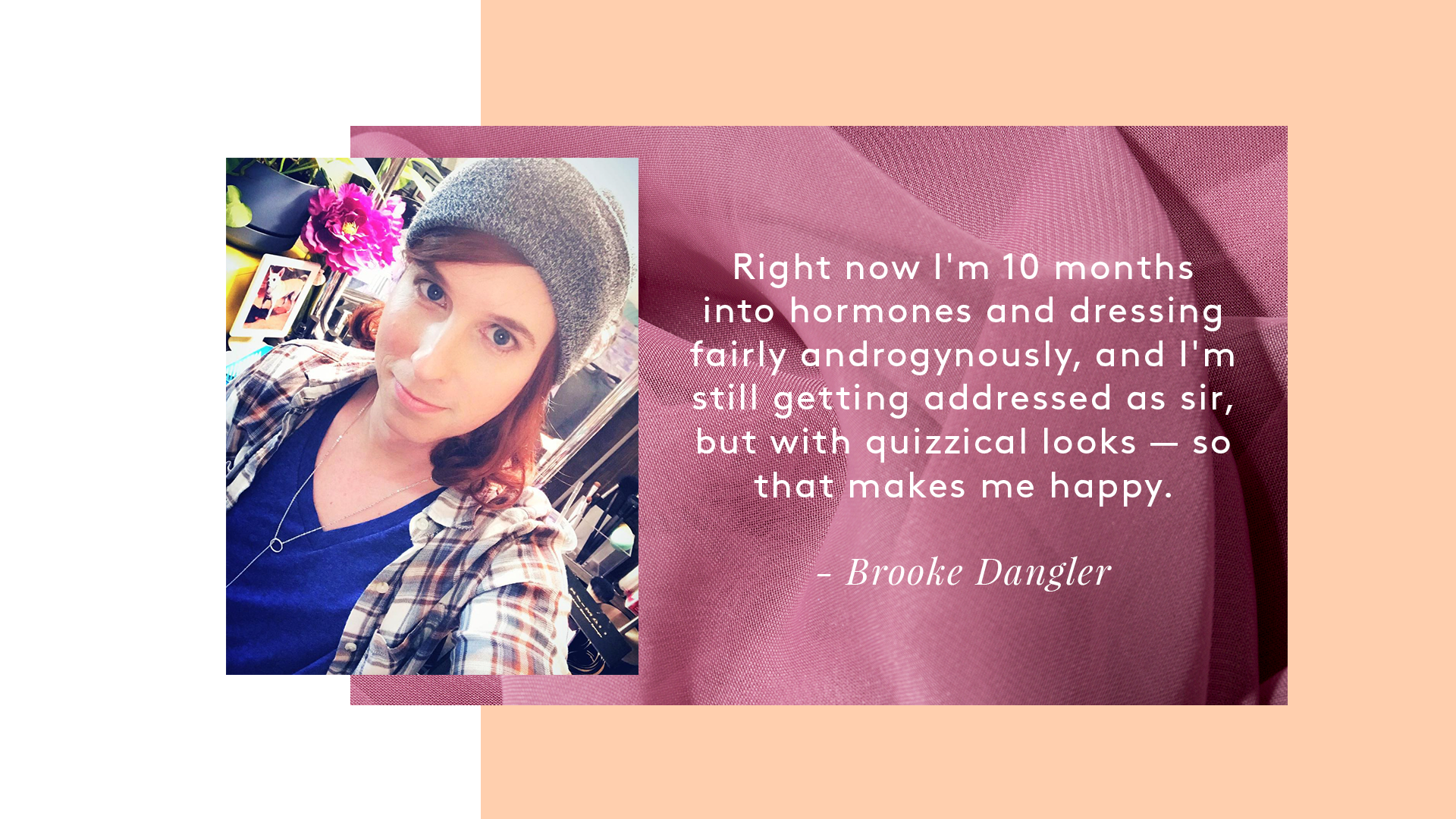 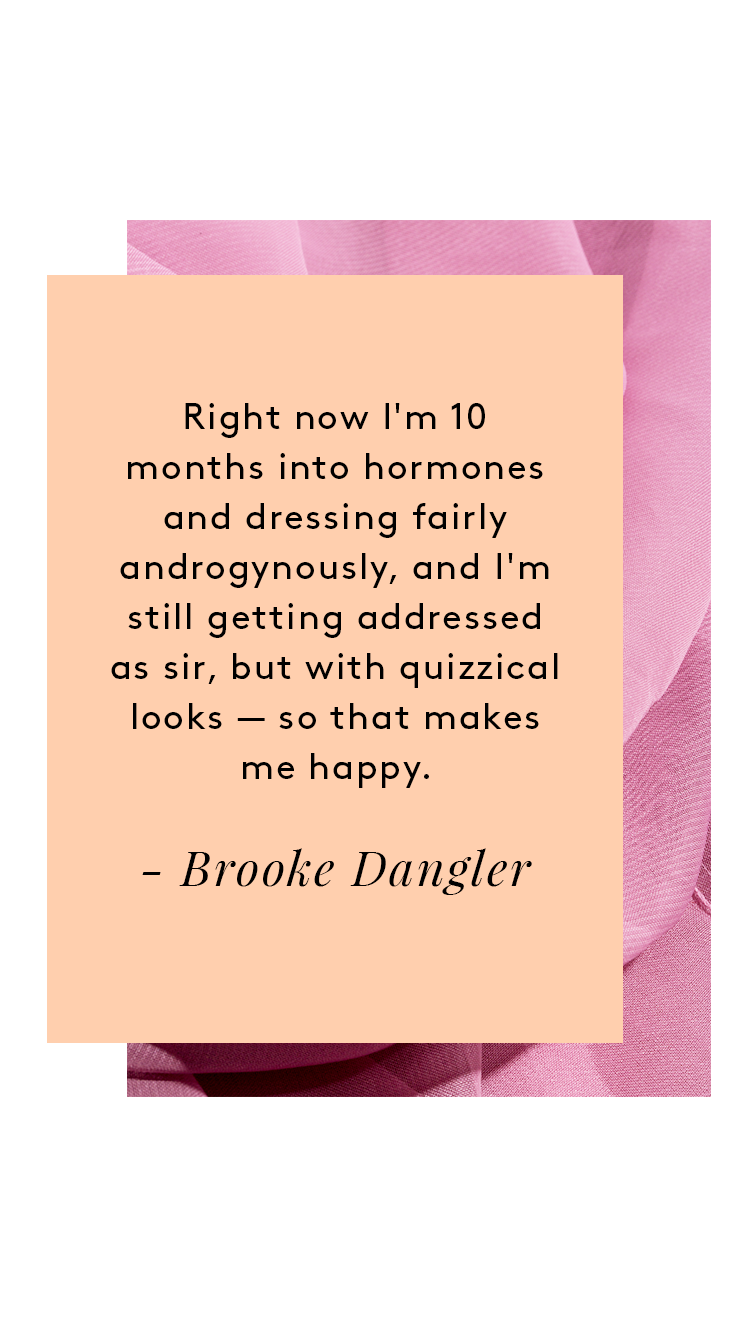 Finding A Sense Of Self
Hurdling that line between traditional "male" or "female" identifiers can be, for some trans people, the most frustrating part of their transition. When the eventual tipping point of being recognized for the correct gender begins to happen, it can feel like a weight has been lifted. "Right now I'm 10 months into hormones and dressing fairly androgynously," Dangler says. "I'm still getting addressed as sir, but with quizzical looks — so that makes me happy."
After countless painful conversations, doctor's appointments, surgeries, medications, or injections, this breakthrough is when many trans people feel like they can finally begin to live their truth — and even have a little fun. After all, when so many hairstyles, clothes, or beauty products have been considered off limits, it becomes a liberating opportunity for expression.
"I tried to make it very apparent that I was a woman, which to me meant wearing super-revealing outfits," Dragun says. "I experimented with wigs, padding, and voices. I would put on the biggest lashes, the brightest lipstick, the tallest heels — everything was over the top in the beginning. I piled on so much makeup, I was practically a drag queen."
Advertisement
It's a scenario many can relate to, whether you discovered your own personal style at 15 years old or 30. After a while, Kettl stopped wearing clothing deemed unisex ("I learned that clothes that weren't 'feminine' just worked against me," she says) and adopted a "less is more" mentality with makeup. Dragun eventually got to that point, too: "Now that I'm at the passing stage, I know I could walk outside with just moisturizer on and it will be okay," she says. 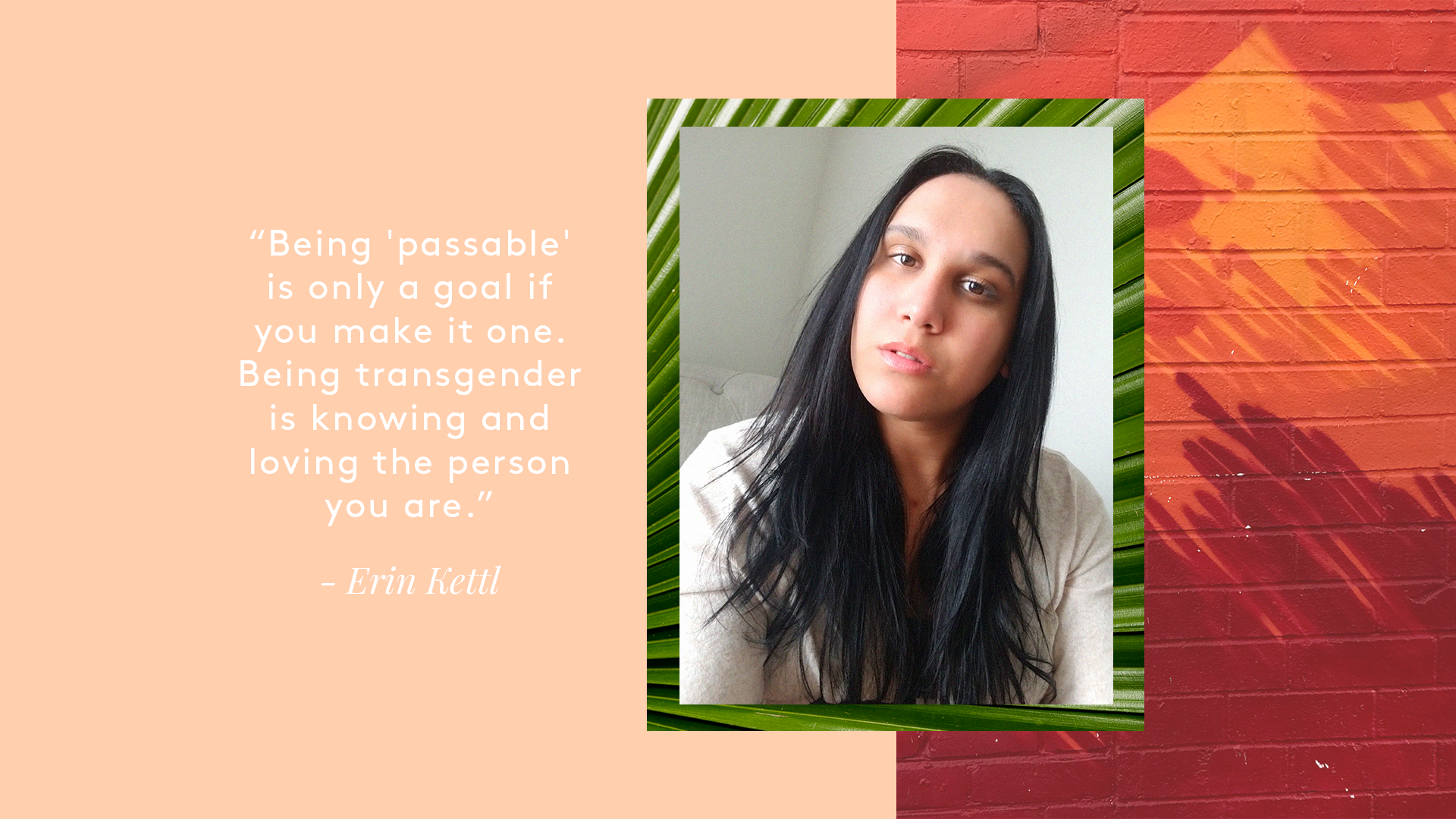 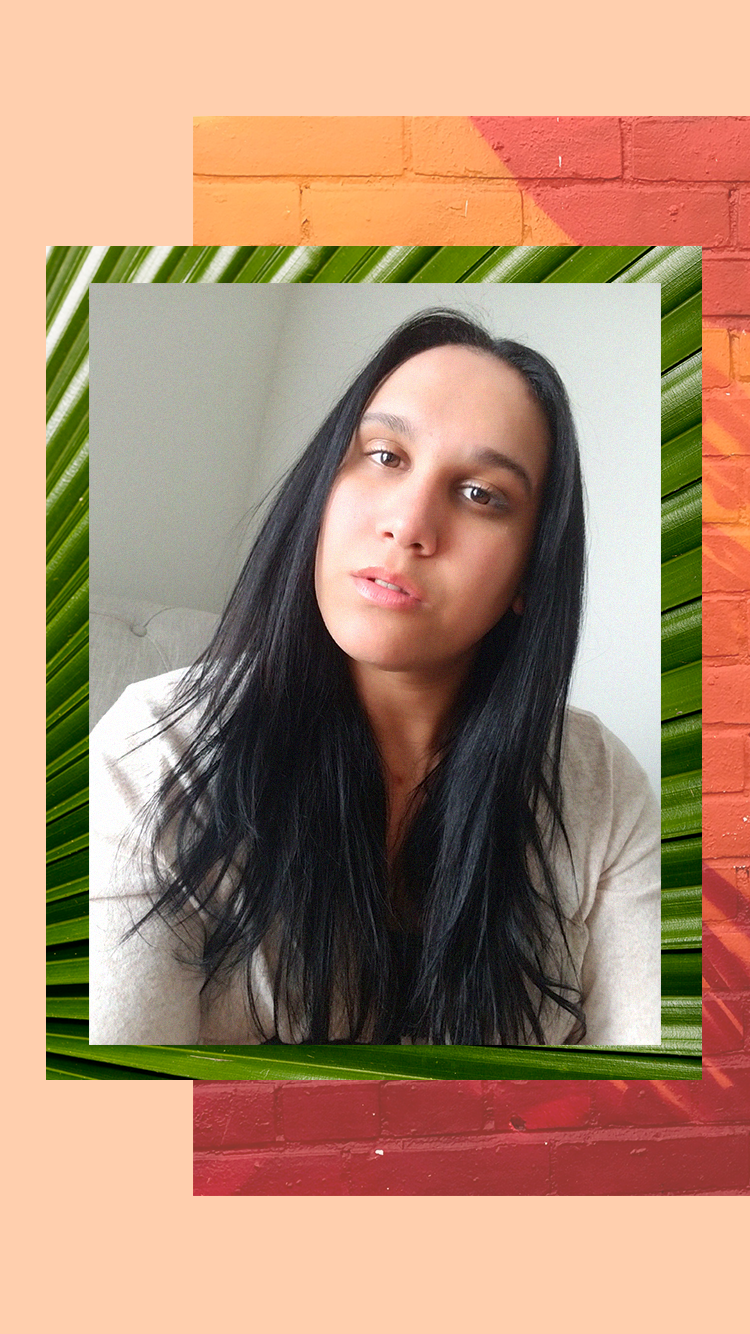 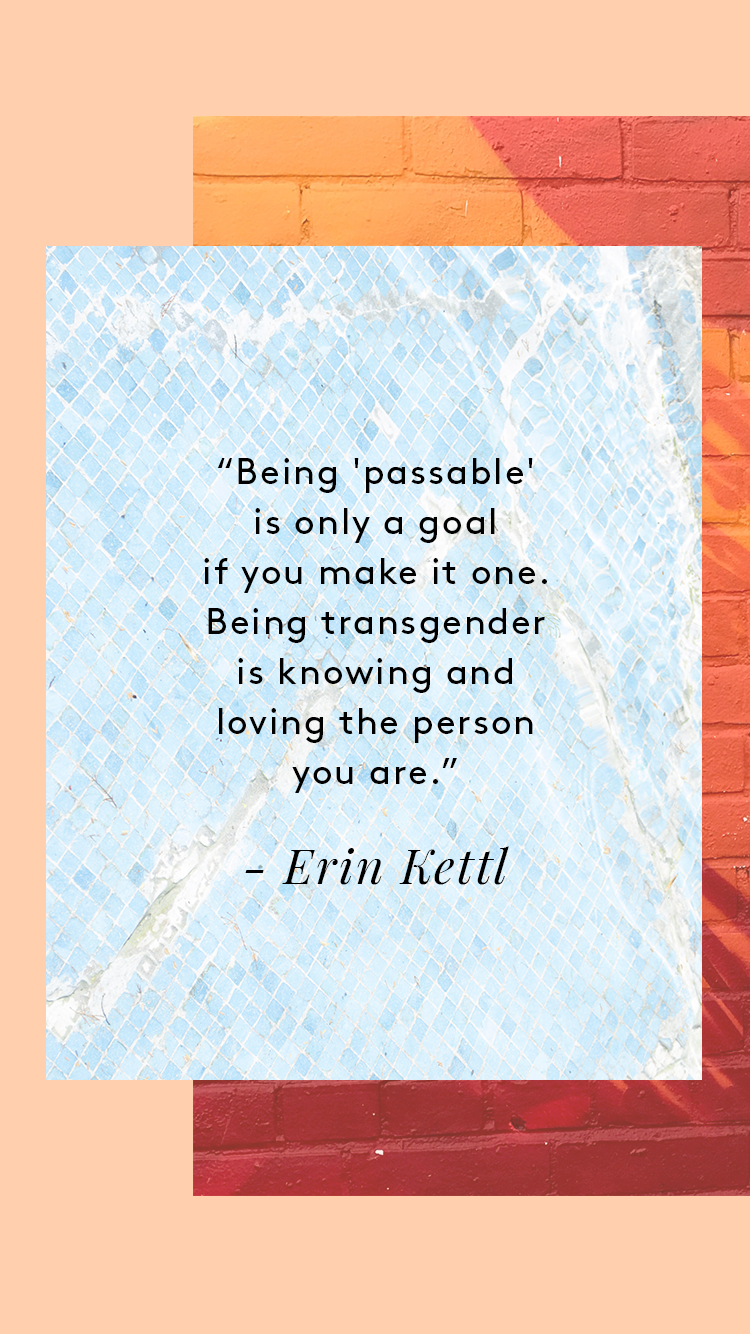 Looking Ahead
While passing does make moving about society easier, that's not the only reason so many trans people desire it. "The outside world only sees us part of the time, while we have to exist in our bodies 100% of the time," Hermosa says. "There's no escaping how it feels. Every mirror, window, or anything that reflects our image reminds us of the mutated form we inhabit."
In the end, the physical transition and surgical procedures are only the tip of the iceberg, and it's important to remember that change has to happen on the inside, too. "Being 'passable' is only a goal if you make it one," Kettl says. "Being transgender is knowing and loving the person you are."
Welcome to MyIdentity. The road to owning your identity is rarely easy. In this yearlong program, we will celebrate that journey and explore how the choices we make on the outside reflect what we’re feeling on the inside — and the important role fashion and beauty play in helping people find and express who they are.
Photos courtesy of subjects.
Advertisement
Skin Care
Drunk Elephant’s Lactic Acid Serum (Actually) Cleared My Maskne
In my decade-long, on-again-off-again relationship with acne, I’ve found a lot of products that I always come back to. (I’ve also found just as
by Karina Hoshikawa
Beauty
The Rise & Fall Of Exfoliating Acids In Skincare
Not too long ago, you could ask any skincare expert which product or ingredient they’d recommend for glowing skin and nine times out of ten their ans
by Jacqueline Kilikita
Beauty
9 Nail Art Trends Taking Off In 2022
For many of us, getting a manicure is a self-care write-off. It takes time and money, yes, but there’s just something about carrying around nice fing
by Megan Decker
Advertisement
Makeup
I Found The Only Two Brow Products I’ll Ever Need
Nearly every time I send a friend a link to something I’ve recently purchased or am thinking of pulling the trigger on, I get the same reply: DonR
by Rachel Krause
Beauty
The TikTok-Famous British Skin-Care Brand You Need To Know
There are a handful of cult skin-care brands you’re likely to spot when scouring #shelfies belonging to beauty influencers, dermatologists, and makeu
by Jacqueline Kilikita
Affordable Beauty
This $11 Drugstore Foundation Makes My Skin Look Airbrushed
For me, foundations exist on a simple spectrum: They are either meh or life-changing. Many of the former don’t leave a lasting impression (with the e
by Karina Hoshikawa
Best Beauty Products
This $9.99 “Wonder” Product Transformed My Dry Hair
Given the past two years of salon closures and social-distancing measures, it makes perfect sense that our favorite beauty brands have launched a handful o
by Jacqueline Kilikita
Most Wanted
The Best Gifts From Black-Owned Beauty Brands At Sephora
These days, we could pit-stop anywhere on the virtual beauty sphere to shop a seemingly endless array of eyeshadow palettes, decadent hair potions, and lum
by Karina Hoshikawa
Beauty
‘Hair Frosting’ Is Replacing Balayage & It’s So...
Though we’re not far into 2022, salon experts have been busy predicting (and cementing) the haircut, color, and styling trends that are going to tak
by Jacqueline Kilikita
Skin Care
This Quinoa-Infused Lotion Makes My Skin Feel Like It Spent The D...
Quinoa: it’s an excellent ancient grain that we love to consume in bowls and dishes for a healthy, protein- and fiber-rich meal. But, as it turns ou
by Karina Hoshikawa
Most Wanted
The Hemp Face Mask Our Writer Swears By For Happy Winter Skin
I’m not gonna lie, this hemp clay mask is IT. It’s no wonder it has over 2,000 five-star reviews and plenty of gushing testimonials. And with t
by Mercedes Viera
Beauty
15 Fresh New Year Haircut Trends Predicted By London’s Top ...
by Jacqueline Kilikita
Advertisement
Advertisement
Discover
R29 Stories & News
Watch
R29 Original Series & Films
Shop
R29's Most Wanted