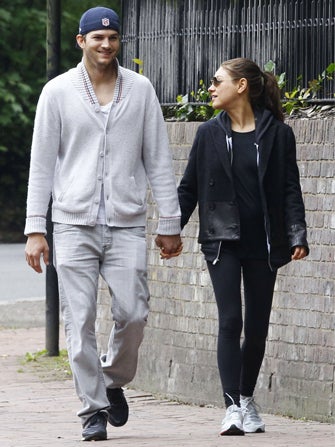 Photo: Courtesy of Fame/FlyNet.
Aww, the first kiss. Whether it was cringe-worthy or sweet, everyone remembers that innocent, somewhat awkward smooch. But, not everyone can count a famous celeb as their first kiss like Mila Kunis can.
So, who was the actress' first lip lock? Turns out, it was none other than her current beau and former co-star Ashton Kutcher. The couple's That '70s Show co-star Laura Prepon spilled the details to Us Weekly, adding that she wasn't surprised when the duo reconnected last year — even though it had been 14 years after their show first aired. Prepon, who now stars on Netflix's huge hit Orange is the New Black, is a full supporter of the romance, calling it "incredible." Looks like the stars realigned perfectly for these two. (E! Online)
Shopping
31 Dreamy Dresses To Wear This Easter
We've rounded up 30 pieces you'll want to wear on the holiday — and all spring long.
by Maude Standish
Beauty
The Pro Guide To Getting, Maintaining & Growing Out Blonde Hair
by Lexy Lebsack
Shopping
30 Pajamas That Will Make You Want To Cancel All Your Plans
by Eliza Huber
Advertisement
Los Angeles
The All-Time Best Brunch Spots in L.A.
by Erin Fitzpatrick
Los Angeles
The 30 Most Important Stores In Los Angeles
by Erin Magner
Travel
10 Of The Most Photographed Spots In Los Angeles
(Paid Content) If ever there was a city that deserved to be photographed, it's Los Angeles. An unholy mix of grit and glamour, it's both a dream and a drea
by Sophie Ross
Celebrity Beauty
Why Kim Kardashian’s Hairstylist Didn’t Want A Wedding
by Lexy Lebsack
Los Angeles
These Two Millennials Want To Change The Way We Die
“I wasn’t some kooky kid who was collecting dead animals and keeping them in jars,” Amber Carvaly explains. “I was obsessed with Th
by Lexy Lebsack
Los Angeles
How To Style L.A.’s Most Popular Haircut 3 Ways In 3 Days
by Lexy Lebsack
Los Angeles
The Best Drugstore Products For Fall, From Hollywood’s Top ...
by Lexy Lebsack
Los Angeles
The Most Revolutionary Beauty Products EVER, Picked By Hollywood’...
by Lexy Lebsack
Los Angeles
24 Drugstore Products Hollywood’s Top Makeup Artists Swear By
by Lexy Lebsack
Advertisement
Advertisement
Discover
R29 Stories & News
Watch
R29 Original Series & Films
Shop
R29's Most Wanted