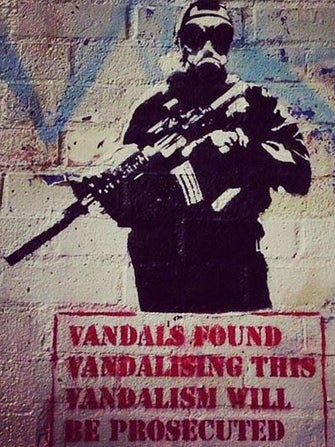 Photo: Via Strömberg/ Facebook
When a new Banksy-style mural recently popped up in Los Angeles, rumors that the sketch belonged to the beloved British artist (who often works in the City of Angels) went viral. But, most things in tinseltown are rarely as they seem, and, as it turns out, this Banksy is no exception. While art enthusiasts giddily speculated whether the tongue-in-cheek piece — which depicts a solider brandishing a machine gun over the slogan "Vandals found vandalizing this vandalism will be prosecuted"— was a clever response to the previous removal of some of his public works, the furtive artist's reps confirmed that the sketch is, in fact, an imitation.
“He has used the word ‘vandalism’ before, but the piece is fake,” a spokeswoman told the New York Times via email.
An L.A. artist who calls himself Strömberg is now taking credit for the mural, posting final and in-production photos of the work on his Facebook page. Will Banksy create some brash, ballsy response to the street artist's blatant adaptation of his work? Only time will tell. But, as they say, imitiation is the sincerest form of flattery. (New York Times)
Advertisement
Shopping
31 Dreamy Dresses To Wear This Easter
We've rounded up 30 pieces you'll want to wear on the holiday — and all spring long.
by Maude Standish
Beauty
The Pro Guide To Getting, Maintaining & Growing Out Blonde Hair
by Lexy Lebsack
Shopping
30 Pajamas That Will Make You Want To Cancel All Your Plans
by Eliza Huber
Los Angeles
The All-Time Best Brunch Spots in L.A.
by Erin Fitzpatrick
Los Angeles
The 30 Most Important Stores In Los Angeles
by Erin Magner
Travel
10 Of The Most Photographed Spots In Los Angeles
(Paid Content) If ever there was a city that deserved to be photographed, it's Los Angeles. An unholy mix of grit and glamour, it's both a dream and a drea
by Sophie Ross
Celebrity Beauty
Why Kim Kardashian’s Hairstylist Didn’t Want A Wedding
by Lexy Lebsack
Los Angeles
These Two Millennials Want To Change The Way We Die
“I wasn’t some kooky kid who was collecting dead animals and keeping them in jars,” Amber Carvaly explains. “I was obsessed with Th
by Lexy Lebsack
Los Angeles
How To Style L.A.’s Most Popular Haircut 3 Ways In 3 Days
by Lexy Lebsack
Los Angeles
The Best Drugstore Products For Fall, From Hollywood’s Top ...
by Lexy Lebsack
Los Angeles
The Most Revolutionary Beauty Products EVER, Picked By Hollywood’...
by Lexy Lebsack
Los Angeles
24 Drugstore Products Hollywood’s Top Makeup Artists Swear By
by Lexy Lebsack
Discover
R29 Stories & News
Watch
R29 Original Series & Films
Shop
R29's Most Wanted