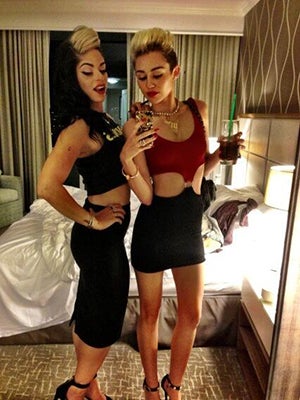 Another day, another scandal Miley Cyrus narrowly misses. Over the weekend, Cyrus slipped her body into a Pretty Woman-inspired dress that got a lot of people talking. Huffington Post believes she may have taken her whole grown-up wardrobe a little too far this time, but who's to say what's age appropriate and what's not? Cyrus tweeted a picture with the caption "Pretty woman...Twerkin down the street." The pic shows a blinged out Cyrus and friend posing in front of their hotel mirror holding what we're going to safely assume is a soda on ice.
The starlet has been down in Miami for the Miami Music Festival and showing the world that she really can't stop whatever it is she's doing — which, if we harp back to her pop-opus "See You Again," she's "just being Miley." Anyway, Cyrus' call-out to Julia Robert's hooker dress might strike an awkward chord, simply because she was born two years after Pretty Woman came out. If we're going to slut-shame Cyrus for donning a dress like this, why aren't we doing it to anyone else who wears a skimpy dress? Sure, she may be asking for the backlash by directly referencing the film, but she's young and she's having fun. What's age appropriate and what's not is all subjective. So, let her ride this phase out and do her thing. She can't stop, but the backlash certainly can. (Huffington Post)
Shopping
31 Dreamy Dresses To Wear This Easter
We've rounded up 30 pieces you'll want to wear on the holiday — and all spring long.
by Maude Standish
Beauty
The Pro Guide To Getting, Maintaining & Growing Out Blonde Hair
by Lexy Lebsack
Shopping
30 Pajamas That Will Make You Want To Cancel All Your Plans
by Eliza Huber
Advertisement
Los Angeles
The All-Time Best Brunch Spots in L.A.
by Erin Fitzpatrick
Los Angeles
The 30 Most Important Stores In Los Angeles
by Erin Magner
Travel
10 Of The Most Photographed Spots In Los Angeles
(Paid Content) If ever there was a city that deserved to be photographed, it's Los Angeles. An unholy mix of grit and glamour, it's both a dream and a drea
by Sophie Ross
Celebrity Beauty
Why Kim Kardashian’s Hairstylist Didn’t Want A Wedding
by Lexy Lebsack
Los Angeles
These Two Millennials Want To Change The Way We Die
“I wasn’t some kooky kid who was collecting dead animals and keeping them in jars,” Amber Carvaly explains. “I was obsessed with Th
by Lexy Lebsack
Los Angeles
How To Style L.A.’s Most Popular Haircut 3 Ways In 3 Days
by Lexy Lebsack
Los Angeles
The Best Drugstore Products For Fall, From Hollywood’s Top ...
by Lexy Lebsack
Los Angeles
The Most Revolutionary Beauty Products EVER, Picked By Hollywood’...
by Lexy Lebsack
Los Angeles
24 Drugstore Products Hollywood’s Top Makeup Artists Swear By
by Lexy Lebsack
Advertisement
Advertisement
Discover
R29 Stories & News
Watch
R29 Original Series & Films
Shop
R29's Most Wanted