Skip navigation!
Story from Entertainment News
We have yet to witness anyone who can out-costume Heidi Klum on Halloween. Dressed as an ape, a crow, and a superhero, she's quickly become Hollywood's spokesperson for the spooky holiday. In the past, the Project Runway host would partner with her then-hubby Seal for the most epic couple-themed getups since Sonny and Cher (remember those Adam and Eve ensembles?). But, since Klum said sayonara to her dude in that messy divorce, she's flying solo for the first time in over a decade. And, how does a newly single, October 31st-obsessed gal tell the world (and her ex!), she's still got it going on? She dresses as history's sexiest monarch — Cleopatra — naturally!
Advertisement
Klum revealed that in just a few days she'll get gussied up as the Queen of the Nile in an elaborate ensemble that'll have guests at this year's fete swooning. Clad in a cleavage-baring and curve-hugging gown, Klum added an over-the-top headpiece (seriously, how tall is that thing?), and a feathered cape to complete the look. And, if you can imagine, this is just a sneak peek of the final production — we're dizzy just wondering what else the supermodel has up her gilded sleeve!
Now, we're not going to say we told you so — but we totally predicted that Cleopatra would be one of this year's top muses. And while not everyone is on a Klum budget (she told her costume designer to make something, "Big. Gold. Glittery."), we still managed to make it work with our take on the Egypt's raciest ruler. And we're totally prepared to dethrone last year's costume-contest winner this time 'round. (Grazia Daily) 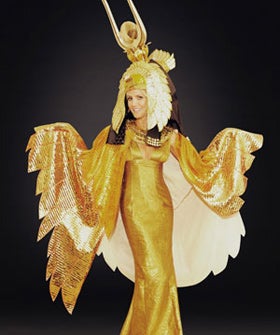