Skip navigation!
Story from Los Angeles
UPDATE: Mazel tov to Mr. and Mrs. Timberlake! The happy couple finally said "I do." (Huff Post Celeb)
UPDATE: More deets have emerged since Wednesday, and it has been confirmed that Justin Timberlake and Jessica Biel are indeed getting hitched in Italy. We originally guessed Tuscany or Rome, but it turns out guests have flown to Puglia along the Adriatic Sea for some pre-wedding festivities. The Euro paps (notoriously sneakier than L.A.'s photogs), have already spotted some A-list attendees including JT's SNL BFF Andy Samberg, *NSYNC bandmate Chris Kirkpatrick, Timbaland, and Biel's 7th Heaven co-star Beverley Mitchell. The ultra-rustic affair has been under wraps since the save-the-dates were sent, but with ten-minute firework displays and large Italian feasts already a part of the itinerary, it looks like this affair has "splashy tabloid cover" written all over it.
Advertisement
We're still waiting on the most important info like the bride's gown and the sure-to-be-extravagant menu (what, you aren't curious about the eating habits of the rich and famous, too?). But, one thing's for sure: This ceremony already takes the cake when it comes to over-the-top destination weddings! (US Weekly)

Yes, wedding season is officially winding down, but before you retire the nuptial-themed Pinterest boards, get a load of this:
Life&Style
reports that Justin Timberlake and Jessica Biel will be walking down the aisle this weekend. And, if you thought they'd pull a Natalie Portman or Anne Hathaway and keep it local in Cali, think again! After guests signed confidentiality agreements, the pair have revealed only a handful of details about the big day — one of them being the location: Italy.

Although the tabloid kindly narrowed down what hemisphere will host the couple's "I Dos," the exact location is still TBD. But, whether it's in Sicily, Tuscany, or Rome one thing's for sure — Timberlake and Biel aren't joking around when it comes to secrecy. Family and friends are encouraged to leave their cell phones and cameras back at the hotel, otherwise they will be confiscated upon arrival. Oh, and although save-the-dates were sent a few months back, those on hand for the ceremony were told to just fly to the European country. Wait, what happens if you landed in Milan and the marriage is in Venice? Merda!
Advertisement
The gossip rag also told readers a while back that Biel will be tying the knot in Elie Saab. We're chomping at the bit to see what the red carpet regular will whip up for the bride. But, the real question may be: How's she going to top that massive engagement ring? (Life&Style) 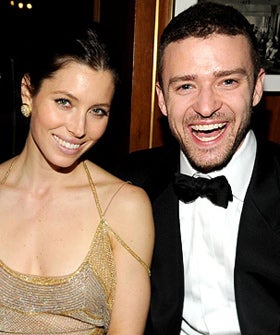 Photo: Via US Weekly