Skip navigation!
Story from Beauty
Dear Daniela,
Ever since the beginning of lockdown, I’ve noticed that my lashes seem to be much more sparse. I’m not seeing them fall out in clumps, but they feel and look really fine, and I’m concerned it’s starting to spread to my brows, too. They are definitely shedding, and while I think I might have been subconsciously touching or fiddling with them, I don’t wear false lashes or extensions or anything like that. What could be causing this? How do I stop it?

Alicia, 24
While more attention is now (rightly) being given to the prevalence and psychological effects of hair loss in women, brow and lash shedding isn’t something that gets spoken about as often. In reality, I think losing your brows or lashes, or even just suffering a minor episode of shedding, can be just as disquieting and upsetting – especially given how much current beauty standards revolve around defined brows and luscious lashes.

This is not to minimise what’s been happening to you, but before I jump into the expert advice, I just want to gently remind you that lockdown has been doing strange things for a lot of people’s self-image. It’s been well-documented that demand for cosmetic procedures and injectables has boomed, and Save Face, who have a directory of accredited UK practitioners have seen a 40% increase in traffic to their website. Being forced to look at your own reflection all day on video calls is quite simply not healthy and not normal. Oftentimes, we can start to perceive things that quite simply aren’t there. Okay, now I’m done being your mum, I can be your big sister again.

“If the shedding is localised just to your brows and lashes, it could be alopecia areata,” said trichologist Stephanie Sey. “Much like other forms of alopecia, it’s triggered by an immune response wherein the body starts to attack the hair follicles. The only difference is that with alopecia areata, you get the shedding in small, contained areas,” she said. It could be as small as a gap in a single eyebrow, said Sey, who added that the condition was usually a stress response gone wrong: “The main reason that alopecia areata comes to mind now is that during this period, a lot of people have been suffering from stress and anxiety, and one of the precursors to alopecia areata are stressful episodes,” said Sey, also adding that students often get it, or those who’ve been made redundant or are going through a big life change.

You didn’t mention any hair thinning on your head, but if you're someone with thick hair, it’s possible there is some shedding on your head too, but you haven’t noticed it yet. “Quite often, people with thick hair don’t notice that there’s shedding until a hairdresser points it out,” said Sey. This isn’t to scare you! It’s more that if you do decide to see a specialist, it’s better to be armed with all the facts about your case. As Sey explained, the growth cycle of lashes and brows is much shorter than hair on your head – around three months versus up to seven years. Essentially, this means that you’re more likely to see shedding on your brows and lashes than with hair on your head, as the lashes will simply fall out once they’ve reached the end of their growth cycle.
Advertisement
“With many instances of alopecia like this, by the time you notice the shedding, the issue that caused it has often been resolved, so to speak,” continues Sey. Essentially, by the time you actually see hair loss, the stressful event or sickness that acted as that trigger has been and gone, and the alopecia is a hangover from that. Sey reassured me that cases of alopecia like this are very usually treatable, brief and reversible, but said to go and see either your GP (if you have a good relationship with them and trust them to take your concerns seriously), or a trichologist like herself who can help with tests or even a dermatology referral if you need it.
If you think your fussing with your lashes and brows might be getting into proper habitual picking behaviour, our beauty editor Jacqueline has written about her own experiences with skin picking that might help you. Trichotillomania is also a common condition, which results in repetitive hair pulling (including brows and lashes) and is exacerbated by stress. Generally reducing your stress levels, through whatever works for you – yoga, meditation, long walks, trash TV – is always a plus, and if you’re doing it reflexively when stressed, a fidget spinner or stress ball could help. Ask your flatmates or family to tell you to stop if they see you doing it – accountability is key here. 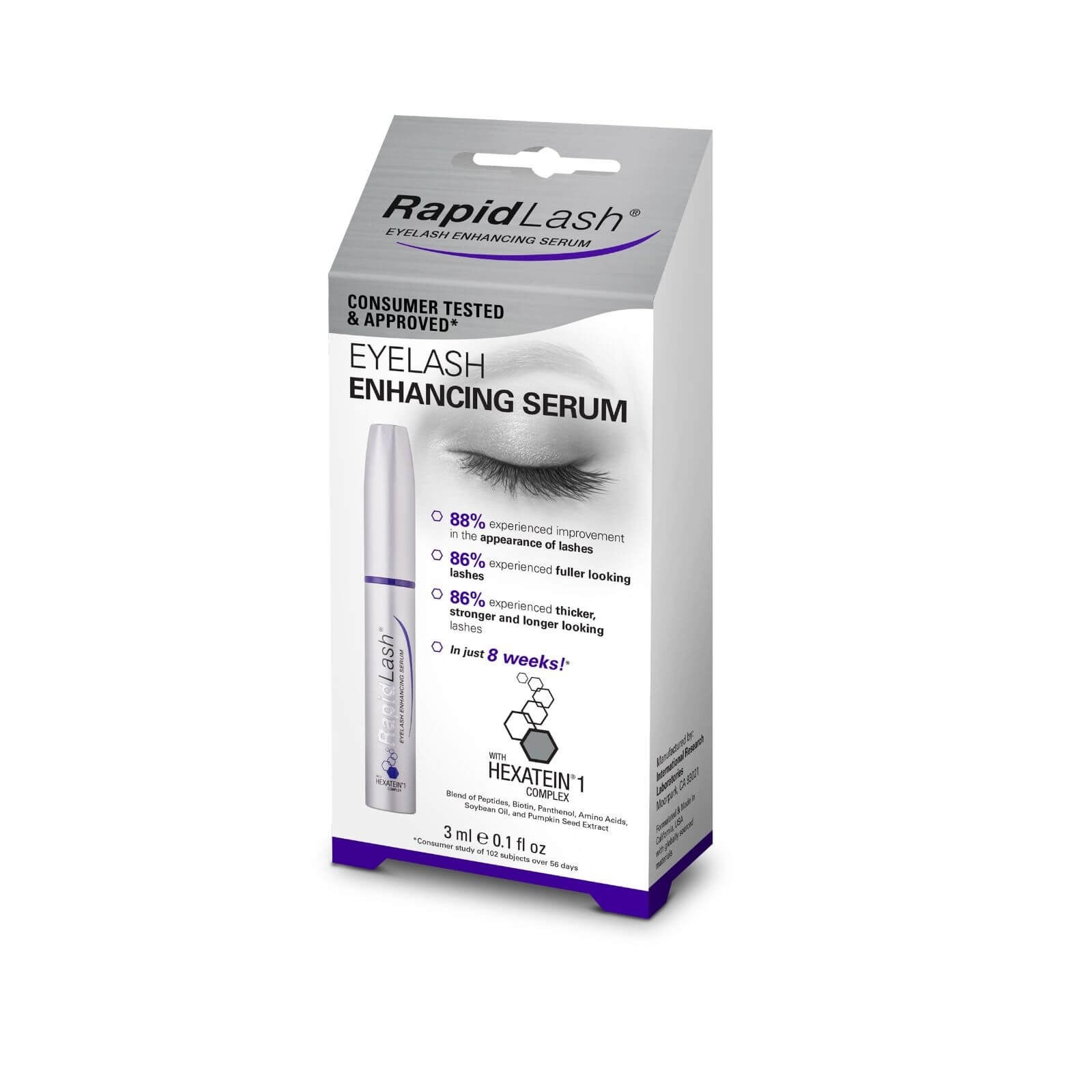 Rapidlash
Eyelash Enhancing Serum
£39.99
LookFantastic
While there are a number of so-called growth boosting supplements and treatments on the market, Sey said she doesn’t like to recommend them as most of them lack robust clinical evidence. “If you want to use a serum or something, that’s fine, but do it in combination with seeking medical guidance, so that you don’t lose more time trying something that might not work,” she added. Also, these serums and supplements are usually pretty pricey – but if you want to give it a shot, RapidLash is one of the most popular.

Daniela
Got a question for our resident beauty columnist Daniela Morosini? No problem, qualm or dilemma is too big, small or niche. Email deardaniela@vice.com, including your name and age for a chance to have your question answered. All letters to 'Dear Daniela' become the property of Refinery29 and will be edited for length, clarity, and grammatical correctness.
Refinery29's selection is purely editorial and independently chosen – we only feature items we love! As part of our business model we do work with affiliates; if you directly purchase something from a link on this article, we may earn a small amount of commission. Transparency is important to us at Refinery29, if you have any questions please reach out to us.
Beauty
Billie Eilish Got Real Honest About All The Celeb Beauty Lines Ou...
Listening to a Billie Eilish song for the first time feels as though you’ve entered an alternate dimension. The Grammy Award-winning singer somehow m
by Amanda Mitchell
Beauty
This Serum Made My Skin Look Like I Was Wearing A Glow Filter
When it comes to skincare, I am a creature of habit, tending to stay firmly in my comfort zone. This means that I’ve experimented with hardly any ing
by Venus Wong
Clear Skin
This Is The Ultimate Skincare Routine For Autumn Weather
When it comes to skincare, I am a big believer in “if it ain’t broke, don’t fix it” (I apply a similar maxim when I eat the exact same thin
by Daniela Morosini
Advertisement
Beauty
Considering Botox? Choose This Skincare Ingredient Instead
In a world jam-packed with ‘must-have’ skincare products and ‘buzzy’ new ingredients, it’s trickier than ever to sort the wow
by Jacqueline Kilikita
Beauty
11 Fresh Autumn Haircut Trends, Predicted By London Stylists
by Jacqueline Kilikita
Clear Skin
Refresh Your Skin With One Of These Restorative Facials
by Georgia Murray
Shopping
We’ve Tried So Many Products From Glossier & Here’s W...
by Rachel Krause
Beauty
I Tried £466 Worth Of Tatcha Skincare & Here’s What’s...
Follow a UK beauty editor through New York and they’re very likely to pay a visit to two places before anywhere else. First of all, CVS, to pick up d
by Jacqueline Kilikita
Beauty In A Tik
TikTok’s Upside-Down Shampoo Hack Gave Me Better Hair — & Skin
Welcome to Beauty In A Tik, where each week we put TikTok’s viral beauty hacks and innovative trends to the test. Hair is huge on TikTok. If you̵
by Jacqueline Kilikita
Beauty
How To Do London Fashion Week’s Looped Bun On All Hair Lengths
From ruffles and ruching to ‘laminated’ skin, London Fashion Week served up all manner of Instagram-worthy trends. It’s safe to say that
by Jacqueline Kilikita
Beauty
I Got TikTok’s Viral ‘Midi Flick’ Haircut & Her...
View this post on Instagram A post shared by MATILDA DJERF (@matildadjerf) Getting long hair cut is always a little nerve-wracking, especially when it̵
by Amy Sedghi
Beauty
26 Cosy New Perfumes That Radiate Autumnal Vibes
by Esther Newman
Advertisement
Advertisement