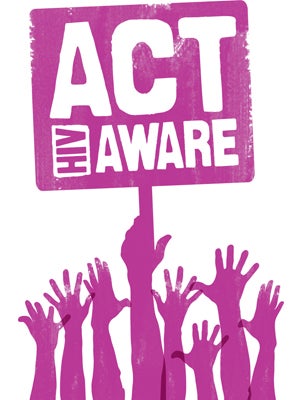 Tomorrow, December 1, is World AIDS Day, a time reserved to unite, educate, and spread awareness of the dire effects of HIV and AIDS. Although the celebration will focus on the theme of "getting to zero," the unfortunate reality is that the rate of people infected with HIV and AIDS is at its highest ever, reports the Centers For Disease Control and Prevention.
Across the world, more than 34 million are infected with HIV. In the United States, an estimated 1.2 million are HIV positive. And New York, with approximately 110,000 residents known to be living with HIV or AIDS (more than any other state), is the epicenter of the epidemic, according to the New York City Health Department. In fact, "HIV is the third leading cause of death for New York City residents aged 35 to 54."
Advertisement
We hate to throw all these depressing statistics at you, but approaching the global event dedicated to HIV/AIDS education, we couldn't help but wonder: Why, with all the research and advancement made in HIV/AIDS medicine and prevention, are the rates still increasing?
Interestingly, the statistics, although on the rise, are also a testament to how well HIV/AIDS research and the quality of care given is working, says Dr. Monica Sweeney, the New York Department of Health and Mental Hygiene’s Assistant Commissioner for HIV/AIDS Prevention and Control. Say what? How can rising rates of infection possibly be a good thing?
"It’s the best of times and the worst of times. In New York City, I think it’s the best of times, because we have a comprehensive program to address HIV," she says. "Of course, more people are living with HIV. The more people that are living with HIV, the more people are likely to be infected. It used to be that from the time a person became infected to the time they died, it was less than two years. Now, people are living decades, HIV positive, functioning and able to participate in life instead of planning for death."
However, "it’s very important to note that it’s a double-edged sword: Doing better with the epidemic is also a way, if we’re not careful, to increase the number of people that will be infected," Sweeney says. Add to that the fact that there is an estimated addition 21% of HIV-positive New Yorkers who are unaware of their status and could be unknowingly transmitting the virus to others. Moreover, each year, about 1,000 residents don't find out they were positive until they are diagnosed with full-blown AIDS, says the Health Department.
Advertisement 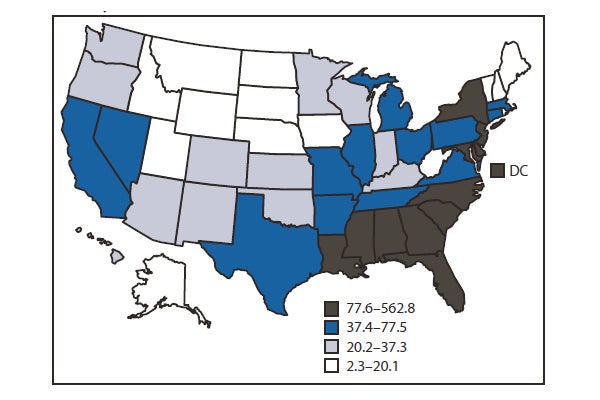 *Prevalence rates (per 100,000 population) of persons aged 13–24 years living with a diagnosis of HIV infection in 2009.
"The most surprising misconception though, is that HIV is no longer a problem. People think it’s sort of a thing of the past. The second thing that is most surprising is that people engage in risky behavior and don’t think they’re not at risk. People have multiple partners, don’t use condoms, haven’t gotten a test, don’t ask their partner their status, and have casual relationships," Sweeney says.
One group more inclined to engage in risky behavior: young adults. This week, the CDC announced that young adults, ages 13 to 26, accounted for 26% of the people diagnosed with HIV in 2010. Despite all the education thrown at America's youth today, Sweeney believes this uptick is due to an indifferent perspective and a lack of realization of how dangerous the disease is.
"One of the reasons it’s happening is because the fear...of AIDS has gone away. Most people in that 13-to-29-age group have never seen anybody die from the complications of HIV, so they are not fearful of it," Sweeney explains. "The second thing is that they have what’s called 'treatment optimism,' which simply means that they know people with HIV, who take a capsule a day essentially — even though it’s three medications, or sometimes four — and go on their way. So, they’re not fearful because they see people around them who have it and are still functioning." Then, there's the group of people who "are not looking to get infected, but they’re not so concerned with it that they are actively trying not to."
Advertisement
In this day and age, we're surprised young people have such a nonchalant attitude toward HIV. When we were in school, it felt like we were exposed to the effects of HIV/AIDS from all angles — in health class, through organizations like Planned Parenthood, and from our own families. But, in the end, Sweeney says, all we can do is play a role — to have protected sex, to get tested, and to help educate others as much as we can.
"In terms of ending this epidemic, we now have all the tools necessary. What we have to do is make sure every single person knows they have a role in ending the epidemic. Every. Single. Person," she says. "If you’re a sexually active person, you have an even greater role, but if you’re the grandma or parent of someone who's sexually active, you still have a role. To end this epidemic, it’s going to take a complete community effort with everyone involved."

Photo: Courtesy of the CDC.

Party Dresses
15 Sequin Dresses To Sparkle In This New Year’s Eve
by Vanessa Golembewski
29Rooms
29Rooms Is Back; Here’s How To Attend Safely
Over the past year and a half, we’ve missed many opportunities to attend concerts, festivals, parties, and hangs. And although restrictions have loosened
by R29 Brand Experie...
Somos Latinx
Dear Miya Ponsetto, You Can Be Latinx & Still Be A Karen
Miya Ponsetto, the white woman dubbed as “SoHo Karen” on social media, was forcibly arrested in California yesterday. Her arrest comes after sh
by Jasely Molina
Advertisement
Food & Drinks
Is A Bagel Really A Bagel If It Isn’t In NYC?
by Elizabeth Buxton
New York
We Dig This NYC Dim Sum
by Camille Coklow
Beauty
The 17 Most Epic NYC Massages
by Kayla Jacobs
Movies
11 Movies Perfect For A Glorious Snow Day
by Vanessa Golembewski
New York
You HAVE To Try The Avocado Toast At These NYC Restaurants
by Elizabeth Buxton
New York
The Absolute Best Spots To Slurp Ramen In NYC
by Zoe Bain
New York
The NYC Rooftops You Need To Hit This Summer
by Elizabeth Buxton
Beauty
The Best Cheap Haircuts In New York City
Choppa style, for cheap.
by Liesa Goins
New York
The Indie Bride-To-Be’s Guide To Dress Shopping In NYC
by Ashley Castanos
Advertisement
Advertisement
Discover
R29 Stories & News
Watch
R29 Original Series & Films
Shop
R29's Most Wanted