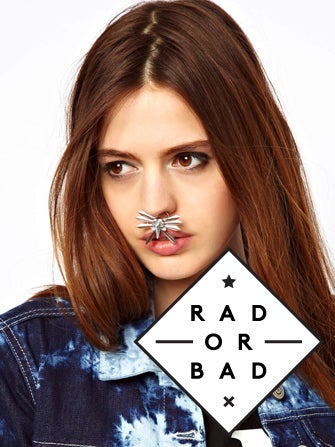 Photo: Courtesy of ASOS ASOS Nose Or Ear Jewel Cuff, $8.49, available at ASOS.
One of the draws of a septum piercing is the ability to turn up your retainer in situations where you don't want your boss/grandparent/recruiter giving you the hairy eyeball. But, we've found a mass resin of a septum ring that's as plain as the…well, nose on your face.
Beginning with Givenchy's massive, mouth-covering faux ring — that appeared on both its men's and women's runways — the silver-dollar-sized septum piercing was something we always associated with high-fashion wackadoodery (much like McQueen's armadillo heel or Marc Jacobs' pantsless fall season). However, this seems to have trickled on down to us plebeians. ASOS is selling a spiked (pierce-less) cuff for under $10 that you can technically wear anywhere, but they chose to model it on the septum. Though we don't recognize this piece of jewelry for any event that involves ingesting foods and liquids or verbally communicating, this is definitely the most "statement" piece of statement jewelry we've ever seen. And seeing as though the only thing you could communicate while one of those things is in is probably just "mmrphhhh," the whole thing is delightfully ironic. Rad or bad, folks — when is a doorknocker septum ring a good idea?
Fashion
11 Summer Fashion Trends That Are The Definition Of Dopamine Dres...
by Irina Grechko
Fall Trends
These Will Be Fall’s Biggest Fashion Trends — How To Shop T...
by Laura Lajiness Ka...
Fall Trends
Trompe L’Oeil Is The Surrealist Fashion Trend That Will Be Everyw...
In fashion, the expression “more than meets the eye” rings particularly true, especially when it comes to one of fall’s biggest trends: tromp
by Frances Solá-Sant...
Advertisement
Style
Miami Swim Week Featured Lingerie-Inspired Bikinis & Retro Prints
by Kendall Becker
Color Trends
Barbiecore Pink Is The Color Of The Year: What’s The Allure?
I asked for no pink clothes but I got them anyway. That’s what happens when you get pregnant with a baby girl — people begin to shower you with pink. A
by Katy Kelleher
Fashion
15 Opera Gloves That Exude Main Character Energy
by Nadia Ebrahim
Fashion
A Puff-Sleeve Dress Is The Wardrobe Staple That Goes With Everyth...
While some people consider white button-downs and a good pair of jeans the makings of a successful capsule closet, big, voluminous, puff-sleeve dresses tha
by Kristen Bateman
Style
How Bratz Dolls Became Fashion’s Biggest Style Muses
From chunky boots to micro-mini skirts — if today's top trends look familiar, you probably saw them on a Bratz doll first.
by Eliza Huber
Fashion
Tube Dresses Are The Y2K Trend Taking Over This Summer
From Kate Moss-approved slip midis and puckered popcorn dresses to tube minis, the late-‘90s and early-‘00s were full of memorable frock styles. The la
by Sandra Okerulu
Fashion
Aura Photo-Inspired Prints Are Summer’s Most Alluring Trend
Getting dressed isn’t usually considered to be a spiritual activity. When you’re running late for work, you just want to make sure your underwear is on
by Aemilia Madden
Fashion
Move Over Cottagecore, It’s All About Farmers Market Fashio...
The first time I rolled out of bed on a sunny Saturday morning and strolled my way down to my local Brooklyn farmers market, I was in for a rude surprise.
by Aemilia Madden
Checking out
Headgear Is The Secret To A Perfect Outfit
by Simone Oliver
Advertisement
Advertisement
Discover
R29 Stories & News
Watch
R29 Original Series & Films
Shop
R29's Most Wanted