Skip navigation!
Story from New York
Sure, "Mosaic Man" Jim Power – the East Village local responsible for the many tiled artworks adorning light posts around our fair city – is nowhere near as chic, comely, and classy as, say, the Dannijo sisters or the Fortunato twins. But that hasn't stopped the sometimes homeless 64-year-old from crafting up some accessories and opening his own Etsy shop. Yes, Mosaic Man is now hawking a line of belt buckles made out his hallmark patchwork of broken china, glass, and other shiny detritus, each of which is so heavy you could, as he says, "use it as a weapon." Very old New York, eh? Now, if you ask us, the wares on his Etsy shop are... okay... we guess (check them out for yourself and let us know your opinions in the comments). But we're withholding final judgement – it is, after all his first "collection." That said, for someone who says he's not, "a jewelry guy," he has a very healthy approach to the fashion biz. "I'm not really a seller," he says, "I'm tired of being broke." Stick to that, MM, and you'll go far. (DNA Info) 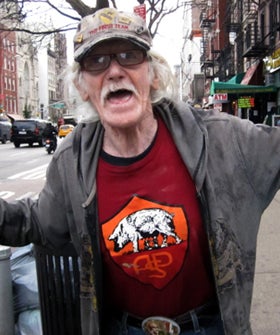