Skip navigation!
Story from New York
There are many soundbites in Matt Lauer's one-one-one interview with Lindsay Lohan, like the fact that she begged Lorne Michaels to be on the show, the fact that she is now "willing" to do the work necessary for turning her life around, and the fact that she does community service at a morgue (let's hope they don't touch this in a skit). But perhaps the most noteworthy was the fact that Lindsay Lohan sees herself coming home from the Oscars a year from now (we can only assume she meant as a nominee). This is kind of like when Babe Ruth pointed to the sky before he hit a home run... except Babe Ruth wasn't, well, Lindsay Lohan. That said, we're squinting back far enough to actually believe she might have the chops to pull off her upcoming role as Liz Taylor...on Lifetime. As Lauer puts it, "America loves a redemption story." We just hope she actually wants it this time and that this interview isn't another empty promise in her long, long history of crying wolf. And, obvs, we're tuning in to watch her host SNL Saturday night. Spoiler alert: after checking in with her lawyer and judge, she will have the green light to poke fun of herself, so fingers crossed we see some new material. What do you think? Is Lohan on the right track to win an Academy Award, or is she speaking too soon? Will you be watching SNL this weekend? (Celebitchy) 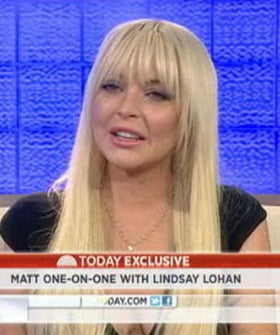