Story from New York
We found out earlier this year what to do with unwanted comments on the street, but what's to be done about body drama in the workplace? One local woman says she was not only called out at the office for her large breasts, but actually fired from her lingerie distribution job for being "too hot." Indeed, 29-year-old Lauren Odes was a production assistant at Native Intimates for a whopping two days before she says she was fired while out shopping for a new, more acceptable outfit (note: she claims the company asked her to buy an ankle-length sweater).
Advertisement
While the word choice involved in this lawsuit is a little bit funny, the situation itself is anything but. We totally get having a company dress code, but the comments and demands Odes professes she had to endure are just plain disgusting. Odes says that before being dismissed, supervisors at the business made her wear a bathrobe to cover up and even told her to tape down her breasts (ow!) to minimize their distracting appearance. Odes is now suing the company for wrongful termination and has hired none other than extra-famous lawyer Gloria Allred to defend her. We guess she forgot that line in Walden to "beware of all enterprises that require new clothes..." (NYDN) 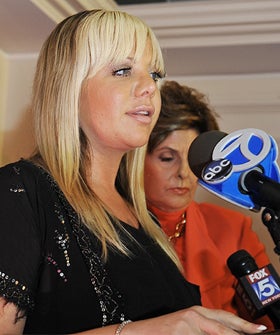