Skip navigation!
Story from New York
For his fall '12 presentation, Jeremy Scott referenced every '90s kid obsession from bad Bart Simpson to Lisa Frank, with insanely awesome results. But was the channeling all his idea? While we're not pointing fingers (yet), there is a line between being inspired and straight-up copycatting, and several critics are saying that Mr. Scott's rainbow-bright styling was more than reminiscent of trend-setting artist and designer Ms. Fitz's iconic, wild face-bling. And, it's hard to ignore that her spring '11 collection featured kooky creative direction by way of dangling nose rings, cotton candy coifs, and tribal-inspired eye markings....everything we say a season later at Scott's show.
Advertisement
We're going to give Scott the benefit of the doubt here, but side-by-side images of his sherbert-headed, nose-chained models and an image of Ms. Fitz herself (at the JS afterparty last September, no less) look way too identical to be coincidental. Maybe Scott's just referencing another beloved pastime of the '90s kid? Twinsies! (Color And Chaos) 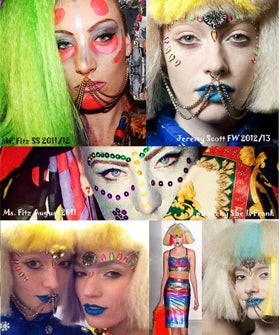 Photo: Via Color And Chaos