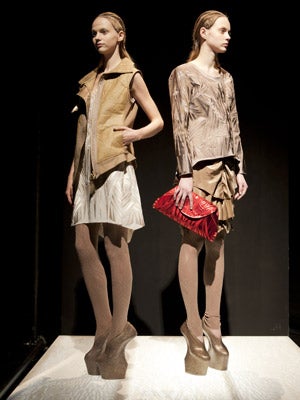 Fans of the Gaga-sized, heel-less, and hoof-like clompers, take note: It seems like buzzy shoe designer Noritaka Tatehana has gotten some love this Fashion Week. Not only has the Lady Gaga-approved designer getting attention at the tents (after international attention when Gaga-loo chucked her shoes on national television), but he was featured alongside other Japanese notables at Leather Japan, a presentation at Lincoln Center that highlighted the masters of leather who are killing it in the trend-setting nation like Tokyo dressmaker Motonari Ono and obsession-worthy bag makers Genten. Though the high-sheen leather, in cut-out forms and on Blade Runner-like mannequins, were worth a look, it's Tatehana's weird, fantastic shoes that really took the show to (pun alert!) new heights.
Advertisement

So obviously Lady Gaga wears your shoes. How does she manage to walk in them?

"I haven't received any comments about how it feels. But I'm very glad that she's now the icon of the shoe collection, it is the signature of Lady Gaga."

If you were a girl, would you wear them?

"Yeah of course. I would try one by another designer because I'd love to discover other designers."
Have you ever tried that pair on? How was it? "(Laughs) Obviously I'm not used to heels."
Are you planning on making anything higher in the future? "Yes definitely."