Skip navigation!
Story from Style
Photo: Victor VIRGILE/Gamma-Rapho/Getty Images.
A lot of the “things you should try” videos that I find on TikTok don't live up to the hype for me: Feta pasta doesn't actually taste that good, 12-3-30 isn’t a miracle workout, and low-rise jeans won’t be making a comeback in my closet. But Gen Z’s call to drink water — at least a gallon a day — is one I embraced during the last year in quarantine. To succeed in their hydration goals, many users carry around gallon-sized water bottles like a handbag, with a strap attached to the receptacle. Their water bottles go everywhere with them. Often they feature motivational measurements and time stamps. (At 9am, the water line says, “You’ve got it;” at 9pm, it says,” Well done!”)
Advertisement
So, once again, I did what TikTok told me to do — and purchased a simple gallon-sized water bottle with a shoulder strap (no motivational phrases for me) to see if it would get me to drink more water. I, too, carried it around like a handbag, taking a swig every time it banged me on the hip during my morning walks or when I ventured to the kitchen from my at-home “office.” At one point, I flew home to see family and brought my water bottle bag as a carry-on; it saved me $9 at Hudson News and kept me hydrated on the plane.
Photo: Courtesy of Givenchy.
Givenchy fall '21 collection.
With its purse-like shoulder strap and scuba material exterior, my water bottle was less aesthetically pleasing than the styles I’ve seen on the runway from before the pandemic. There was a lavender, leather water bottle bag strapped across a (very hydrated-looking) male model’s chest at the fall ‘20 Jacquemus show in January 2020; Chloé, Marine Serre, Prada, Kenzo, and Chanel all, too, included water bottle accessories in their collections that season. But since last fall — when the bags became available for sale — was primarily spent indoors, the trend never really took off. Now that the possibility of normalcy — or something similar to normalcy — is on the horizon, designers are bringing back the accessory again. Marine Serre included them once again in its fall ‘21 show, which was released last week. Givenchy’s latest collection, too, featured a water bottle in the form of a necklace, as did Chanel’s, though the latter house’s bottles were too miniature to provide any real hydration.
Advertisement
This time around, it’s working: I am rethinking the fashion water bottle bag. Once frivolous-seeming, the idea of investing in my hydration is growing on me. Because while carrying a gallon-sized water bottle has made me drink more water, it isn’t exactly the kind of fashion statement I want to be making, especially once I start to see people outside my bubble. Perhaps fashion’s version, despite being slightly smaller, is the replacement I need for my current eyesore of a water bottle.
Photo: Courtesy of Marine Serre.
Marine Serre fall '21 collection.
The beginning of my hydration journey called for something utilitarian; I physically needed to be banged in the hip as a reminder to drink water while adjusting to WFH life. Now that I’ve gotten the hang of it, I’m prepared to ascend to something a little less gauche that still helps me fulfill my daily water goals. No, I won’t be spending $5,000 on a quilted Chanel sling for my Dasani. Something crocheted from Etsy, however, that I would buy. Once Jacquemus’ take goes on sale, there’s a good chance I’ll purchase that, too.
Yes, I should be able to drink a gallon of water a day without turning it into an excuse to shop. But, if you, like me, are willing to admit that you need assistance, the water bottle bags below — which range from starter bottles like mine to DIY and designer upgrades — are here to help. No matter what sort you choose, in my experience, being attached at the hip shoulder with your water bottle is the perfect reminder to hydrate (in style).
At Refinery29, we’re here to help you navigate this overwhelming world of stuff. All of our market picks are independently selected and curated by the editorial team. If you buy something we link to on our site, Refinery29 may earn commission.
shop 7 products 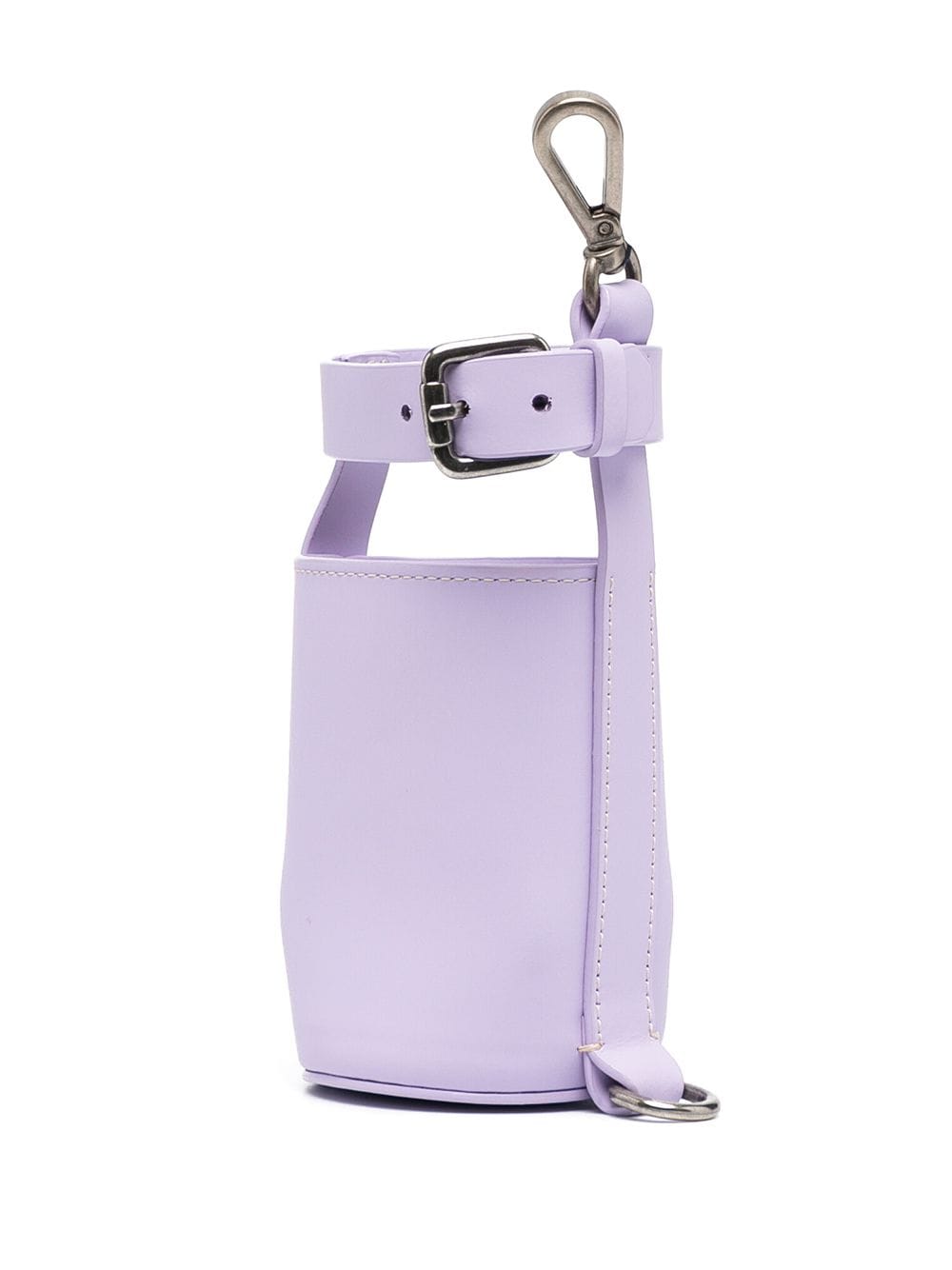 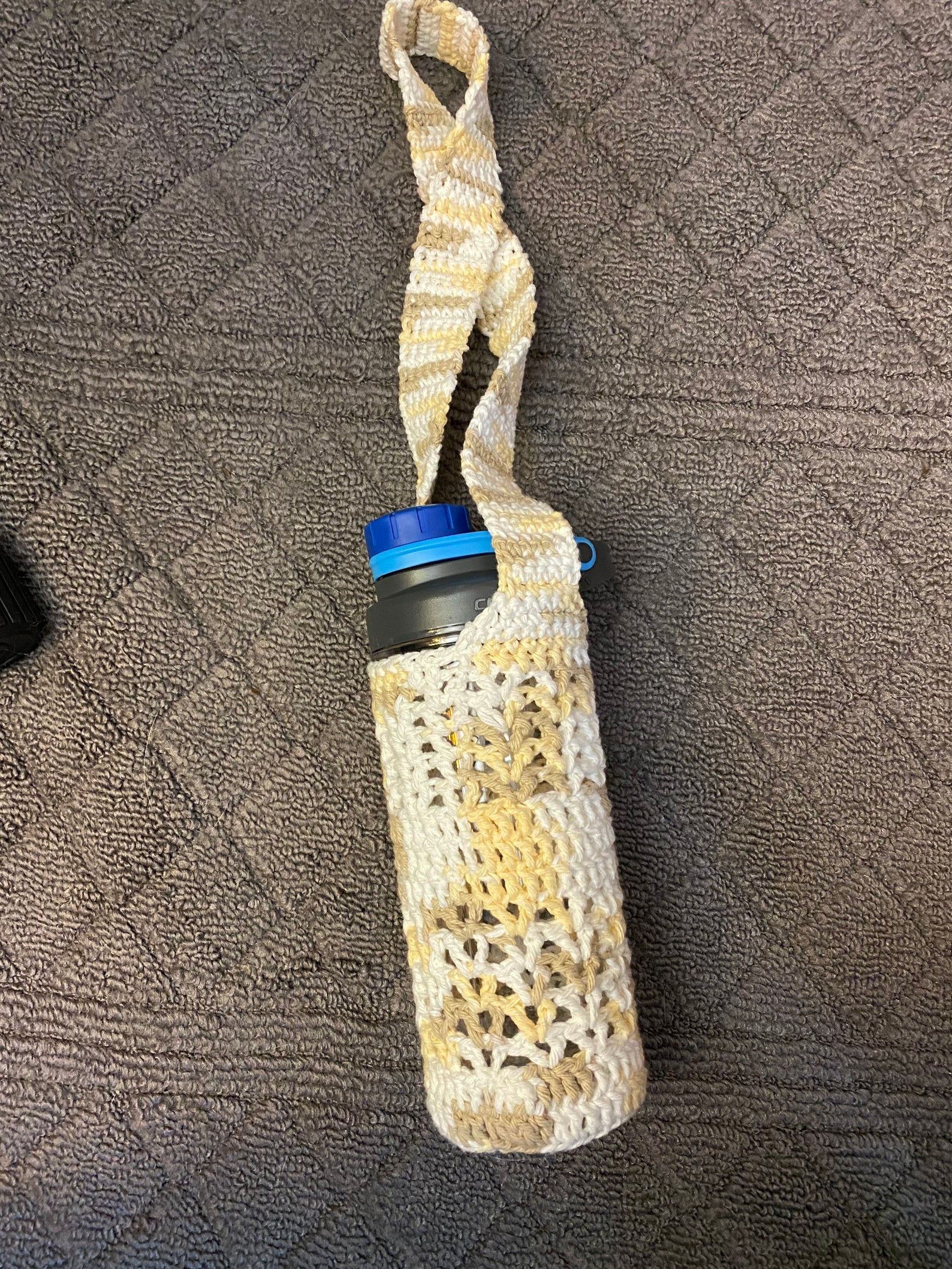 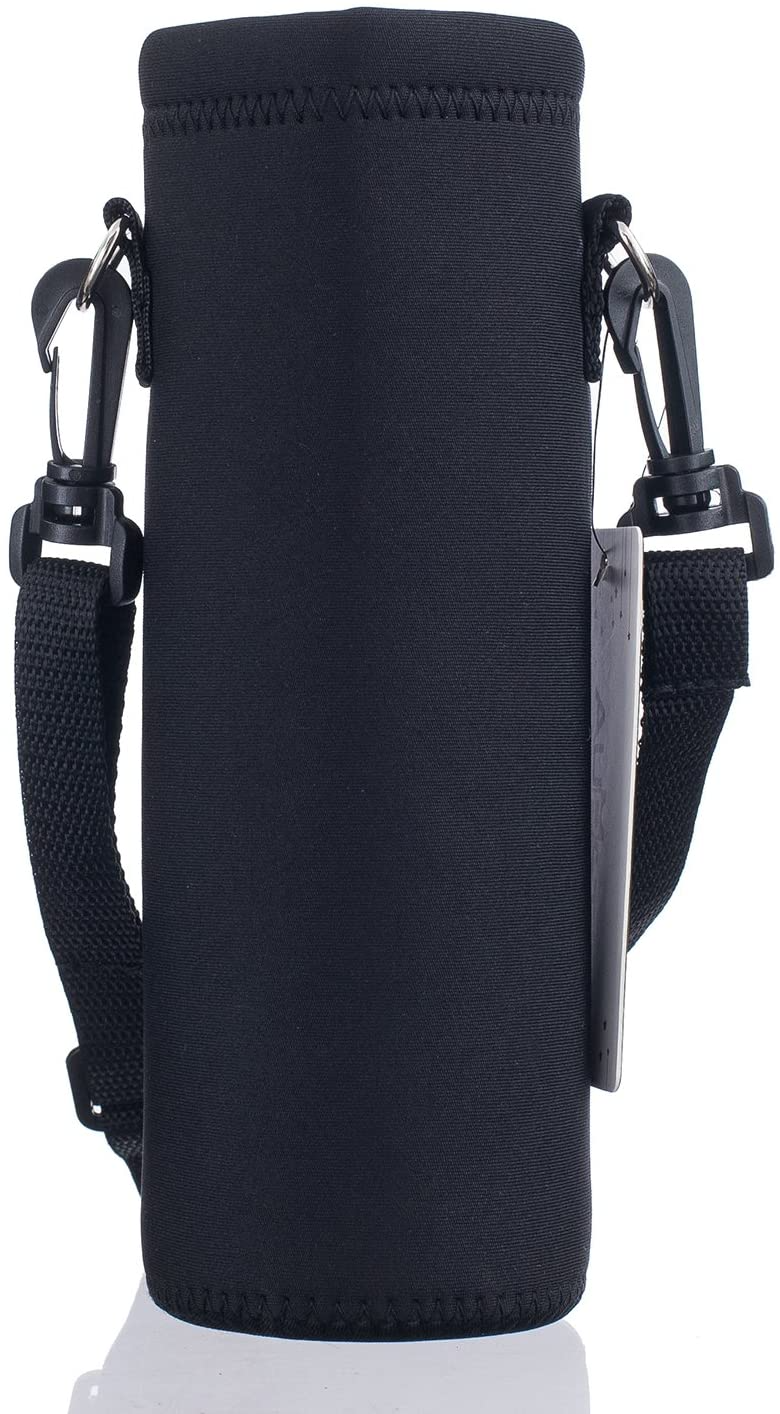 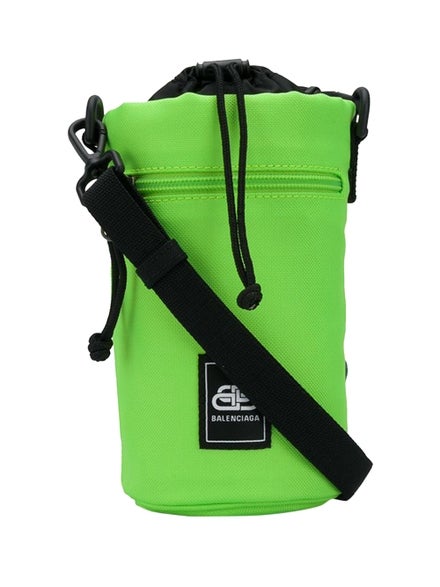 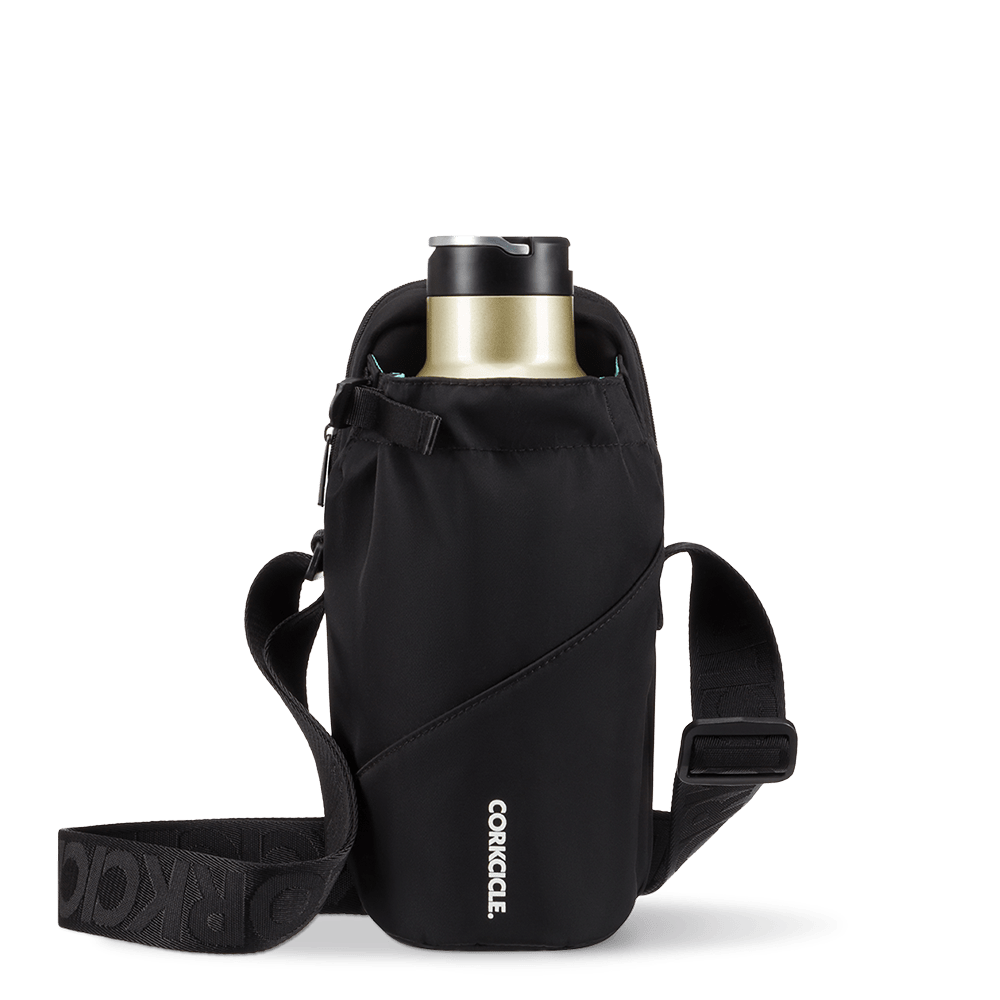 Kenzo
Black Sport Bottle Holder Crossbody Bag
$195.00
SSENSE
Color Trends
Forget Pantone, Barbiecore Pink Is The Color Of The Year
I asked for no pink clothes but I got them anyway. That’s what happens when you get pregnant with a baby girl — people begin to shower you with pink. A
by Katy Kelleher
Shopping
These 13 Slip Dresses Will Be A Breeze To Wear From Now To Fall
by Ray Lowe
Fall Trends
These Will Be Fall’s Biggest Fashion Trends — How To Shop T...
by Laura Lajiness Ka...
Advertisement
Fashion
This Viral Pleated Skirt Is A Fashion Must-Have
Since 2019, fashion forecaster Mandy Lee has been on a hunt for a pleated skirt from Chopova Lowena, the London-based brand founded by Emma Chopova and Lau
by Frances Solá-Sant...
Fashion
Denim Leg Warmers Are The TikTok-Approved Way To Upcycle Your Jeans
Fashion has had a string of odd trends this year, from unnecessary belts to glass handbags and cargo jeans. But if there’s a trend that takes the “Most
by Frances Solá-Sant...
Fashion
11 Summer Fashion Trends That Are The Definition Of Dopamine Dres...
by Irina Grechko
Fall Trends
Trompe L’Oeil Is The Surrealist Fashion Trend That Will Be Everyw...
In fashion, the expression “more than meets the eye” rings particularly true, especially when it comes to one of fall’s biggest trends: tromp
by Frances Solá-Sant...
Style
Miami Swim Week Featured Lingerie-Inspired Bikinis & Retro Prints
by Kendall Becker
Fashion
15 Opera Gloves That Exude Main Character Energy
by Nadia Ebrahim
Fashion
A Puff-Sleeve Dress Is The Wardrobe Staple That Goes With Everyth...
While some people consider white button-downs and a good pair of jeans the makings of a successful capsule closet, big, voluminous, puff-sleeve dresses tha
by Kristen Bateman
Style
How Bratz Dolls Became Fashion’s Biggest Style Muses
From chunky boots to micro-mini skirts — if today's top trends look familiar, you probably saw them on a Bratz doll first.
by Eliza Huber
Fashion
Tube Dresses Are The Y2K Trend Taking Over This Summer
From Kate Moss-approved slip midis and puckered popcorn dresses to tube minis, the late-‘90s and early-‘00s were full of memorable frock styles. The la
by Sandra Okerulu
Advertisement
Advertisement
Discover
R29 Stories & News
Watch
R29 Original Series & Films
Shop
R29's Most Wanted