Skip navigation!
Story from Australian Fashion Week
Photo: Victor VIRGILE/Gamma-Rapho/Getty Images.
A lot of the “things you should try” videos that I find on TikTok don't live up to the hype for me: Feta pasta doesn't actually taste that good, 12-3-30 isn’t a miracle workout, and low-rise jeans won’t be making a comeback in my wardrobe. But Gen Z’s call to drink water — over 3L a day — is one I embraced during the last year in quarantine. To succeed in their hydration goals, many users carry around large water bottles like a handbag, with a strap attached to the receptacle. Their water bottles go everywhere with them. Often they feature motivational measurements and time stamps. (At 9am, the water line says, “You’ve got it;” at 9pm, it says,” Well done!”)
Advertisement
So, once again, I did what TikTok told me to do — and purchased a large water bottle with a shoulder strap (no motivational phrases for me) to see if it would get me to drink more water. I, too, carried it around like a handbag, taking a swig every time it banged me on the hip during my morning walks or when I ventured to the kitchen from my at-home “office.” At one point, I flew home to see family and brought my water bottle bag as a carry-on; it saved me $12 at the airport and kept me hydrated on the plane.
Photo: Courtesy of Givenchy.
Givenchy fall '21 collection.
With its purse-like shoulder strap and scuba material exterior, my water bottle was less aesthetically pleasing than the styles I’ve seen on the runway from before the pandemic. There was a lavender leather water bottle bag strapped across a (very hydrated-looking) male model’s chest at the autumn ‘20 Jacquemus show in January 2020; Chloé, Marine Serre, Prada, Kenzo, and Chanel all, too, included water bottle accessories in their collections that season. But since last autumn — when the bags became available for sale — was primarily spent indoors, the trend never really took off. Now that the possibility of normalcy — or something similar to normalcy — is on the horizon, designers are bringing back the accessory again. Marine Serre included them once again in its autumn ‘21 show, which was released recently. Givenchy’s latest collection, too, featured a water bottle in the form of a necklace, as did Chanel’s, though the latter house’s bottles were too miniature to provide any real hydration.
Advertisement
This time around, it’s working: I am rethinking the fashion water bottle bag. Once frivolous-seeming, the idea of investing in my hydration is growing on me. Because while carrying a gallon-sized water bottle has made me drink more water, it isn’t exactly the kind of fashion statement I want to be making, especially once I start to see people outside my bubble. Perhaps fashion’s version, despite being slightly smaller, is the replacement I need for my current eyesore of a water bottle.
Photo: Courtesy of Marine Serre.
Marine Serre fall '21 collection.
The beginning of my hydration journey called for something utilitarian; I physically needed to be banged in the hip as a reminder to drink water while adjusting to WFH life. Now that I’ve gotten the hang of it, I’m prepared to ascend to something a little less gauche that still helps me fulfil my daily water goals. No, I won’t be spending $6,800 on a quilted Chanel sling for my Dasani. Something crocheted from Etsy, however, that I would buy. Once Jacquemus’ take goes on sale, there’s a good chance I’ll purchase that, too.
Yes, I should be able to drink my daily water without turning it into an excuse to shop. But, if you, like me, are willing to admit that you need assistance, the water bottle bags below — which range from starter bottles like mine to DIY and designer upgrades — are here to help. No matter what sort you choose, in my experience, being attached at the hip shoulder with your water bottle is the perfect reminder to hydrate (in style). 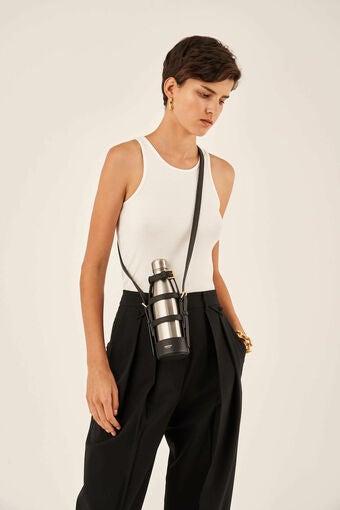 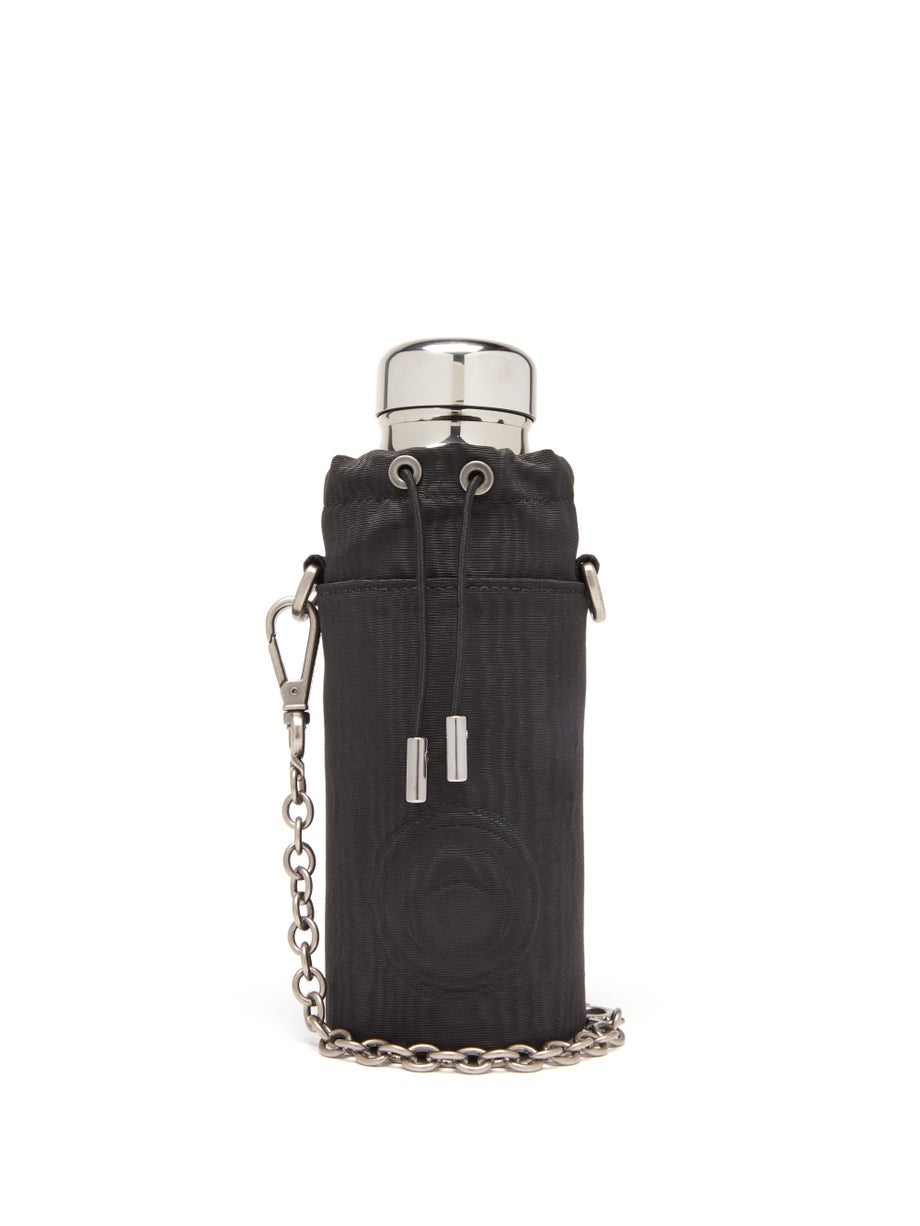 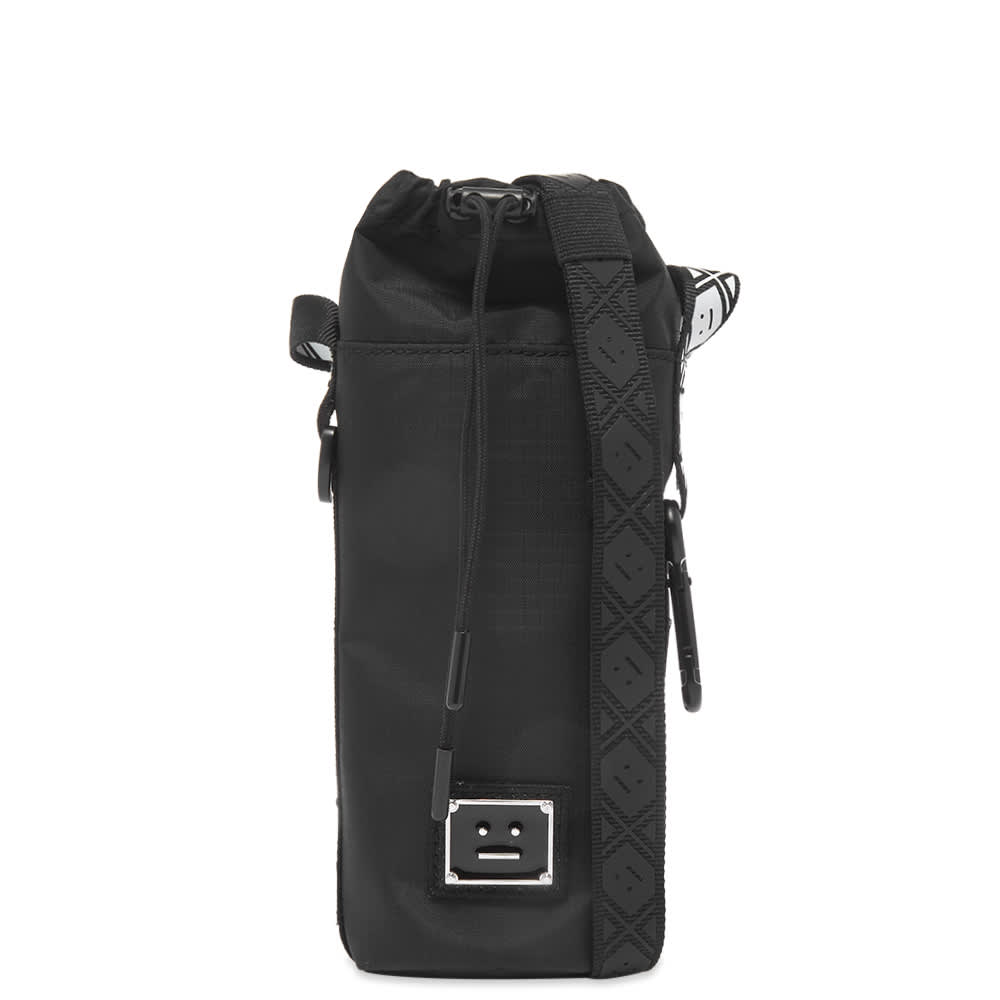