Skip navigation!
Story from Style
Photo: Splash News.
In 2012, on a day that will spawn thousands of memes, Lenny Kravitz bundled up for a grocery run, choosing a scarf as his primary mode of protection from the elements. Why did it spark so much attention — so much, in fact, that we’re still discussing it almost a decade on? It was huge — as in truly gargantuan — and that’s saying something considering Kravitz’s wardrobe is widely composed of oversized scarves. This scarf, though, was bigger than the rest.
“I cannot escape this,” the singer told Jimmy Fallon, of the memes and articles that followed photos of him wearing the scarf, during an appearance on The Tonight Show in 2018. Mostly residing in the Bahamas, Kravitz claimed on the show that he wasn’t used to the cold in New York, where the photos were taken. “I put on a little scarf to protect my throat, and that’s the scarf I had,” he explained, to which Fallon countered: “Lenny, this isn’t a scarf. This is a blanket.” Two years later, the scarf was brought up again, this time during an interview with GQ. When asked if he still owned the scarf, he replied, “Absolutely,” before acknowledging that the scarf was big. In his defense, though, “it was cold.”
Advertisement
But after nine years of mockery, it appears that fashion is finally coming around to Kravitz’s styling hack. Spotted on runways around the world during Fashion Month, the larger-than-life blanket scarf trend is, at last, a hit.
Photo: Courtesy of Ganni.
Ganni fall '21 collection.
Photo: Courtesy of The Row.
The Row fall '21 collection.
The big scarf’s redemption tour began in January, when The Row released its fall ‘21 menswear collection in the form of a lookbook full of big coats, sweaters, and trousers. At the very end, was a photo of a male model wearing a cable knit sweater so oversized, it looked more like a throw knit by your grandma — albeit an expensive one — than a sweater. Around the model’s neck (and perhaps attached to the sweater itself) was a scarf only comparable in size to Kravitz’s own. Just under a week later, a similar scarf-sweater hybrid showed up in Ganni’s lookbook during Copenhagen Fashion Week. Like The Row’s take, Ganni’s iteration was cream, cable knit, and blanketed its model’s entire upper half.
Photo: Courtesy of Fendi.
Fendi fall '21 collection.
Photo: Courtesy of OWENSCORP.
Rick Owens fall '21 collection.
Big scarves continued to show up on runways throughout the month. In New York, Ka Wa Key served up scarves in a myriad of colors, wrapped around the heads, necks, and torsos of its models. In Milan, Kim Jones debuted his first ready-to-wear collection for Fendi, in which he included oversized scarves made of fur and fringe. On Thursday, Rick Owens gave the trend his stamp of approval at his fall ‘21 show during Paris Fashion Week, which included puffer takes on the scarf in mauve and army green. With that, Kravitz’s scarf is now a runway success. It only took nine years and countless memes to get there.
Advertisement 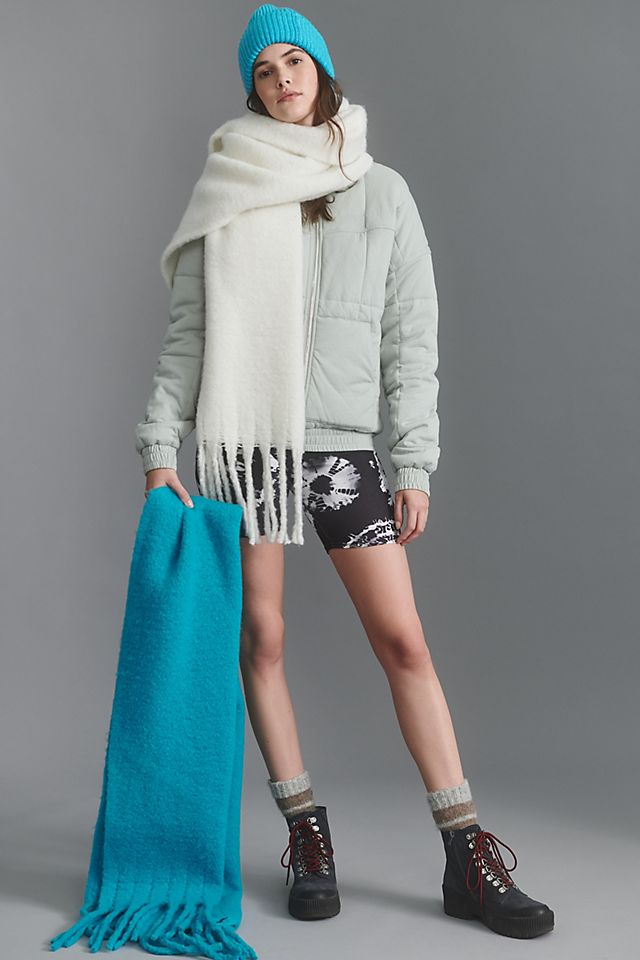 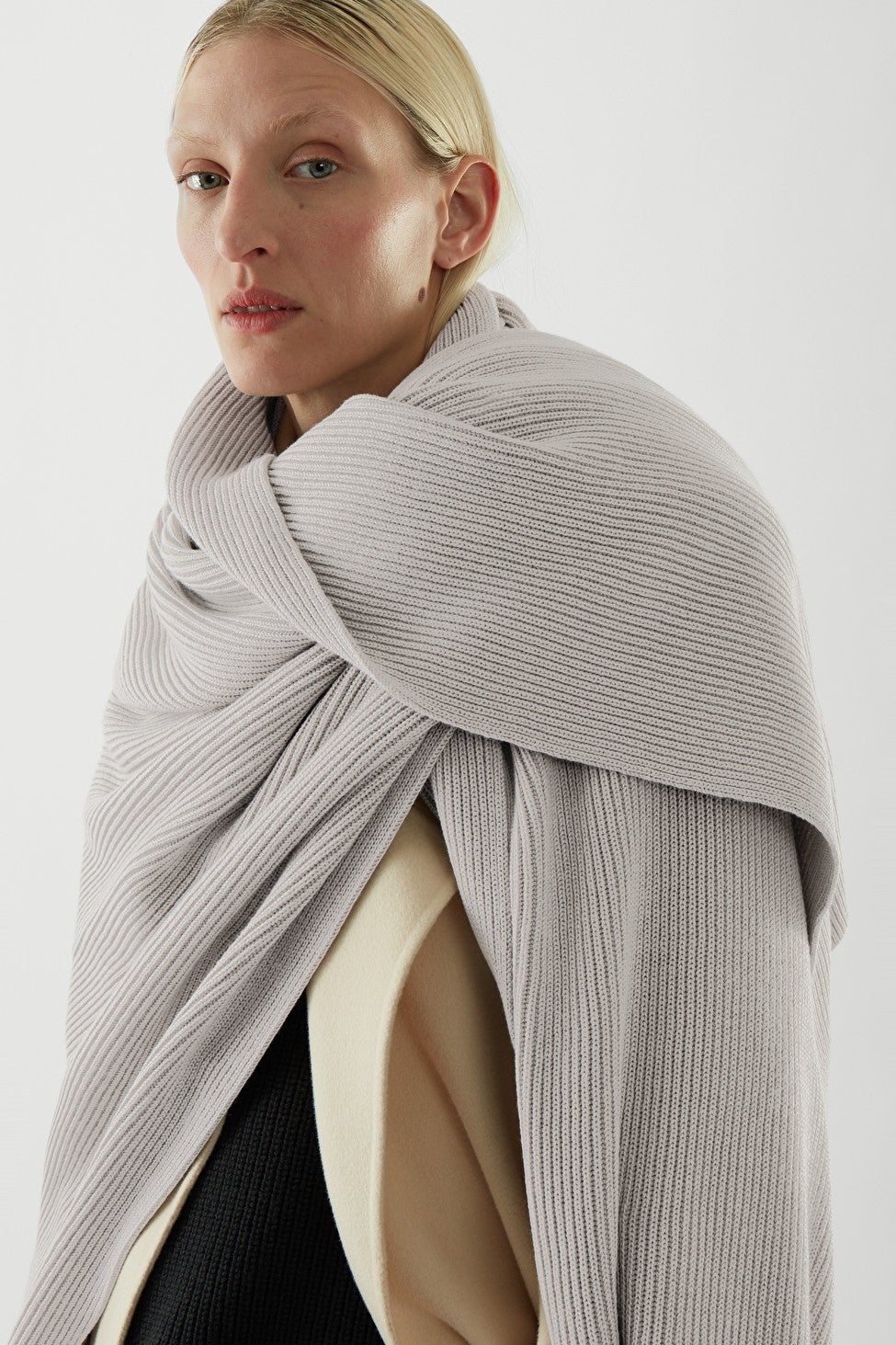 COS
Wool Mix Blanket Scarf
$225.00
COS
Oversized scarves have long held a place in our winter wardrobes, but the scarf selection for next fall isn’t just big — it’s huge.
Maybe by then, it will be cold enough for Kravitz to bring back his scarf.
At Refinery29, we’re here to help you navigate this overwhelming world of stuff. All of our market picks are independently selected and curated by the editorial team. If you buy something we link to on our site, Refinery29 may earn commission.
Fashion
Farmers Market-Inspired Fashion Is This Summer’s Most Optim...
The first time I rolled out of bed on a sunny Saturday morning and strolled my way down to my local Brooklyn farmers market, I was in for a rude surprise.
by Aemilia Madden
Checking out
Headgear Is The Secret To A Perfect Outfit
by Simone Oliver
Fashion
The 7 Biggest Swimwear Trends, According To A Trend Forecaster
by Kendall Becker
Advertisement
Fashion
How To Wear Bloomers, This Season’s Lingerie-Inspired — & Grandma...
In Season 4, Episode 18 of the popular ‘90s television show Friends, Jennifer Aniston’s always stylish character, Rachel Green, unexpectedly meets her
by Shelby Ying Hyde
Fashion
Behold The Latest Handbag Trend: Drawstring Bags
by Ray Lowe
Fashion
These Fashion Trends Are Defining 2022 — Here’s How To Shop...
by Laura Lajiness Ka...
Fashion
What’s Really Behind TikTok’s “Weird Girl Aesthetic”
Last month, creator @kaiageber chronicled in a Twitter thread a new aesthetic emerging in street style: the “weird” girl. Using photos of influencers a
by Frances Solá-Sant...
Fashion
11 Summer Fashion Trends That Are The Definition Of Dopamine Dres...
by Irina Grechko
Fashion
Body Jewelry Dressing Is 2022’s Answer To Naked Fashion Trend
In time for warm weather, fashion has signaled that it’s time to bare it all, with the most popular trends of the summer ranging from party dresses to mi
by Frances Solá-Sant...
Style
Brides Are Buying Secondhand Wedding Dresses. Here’s Where To Fin...
Roughly two million people get married in the U.S. every year, an occasion for which, prior to the pandemic, a good chunk of brides bought a new wedding dr
by Eliza Huber
Style
Chunky Rings Are A Must-Have Summer Accessory, Thanks To TikTok
If you’re on TikTok, you’ve likely seen the colorful, plastic rings that line the fingers of users across the platform. Playful and somewhat child-like
by Eliza Huber
Fashion
How The White Tank Top Became 2022’s Biggest Fashion Statement
The concept of a capsule closet — a wardrobe made up of a versatile collection of basics like black T-shirts, white button-downs, and little black dresse
by Frances Solá-Sant...
Advertisement
Advertisement
Discover
R29 Stories & News
Watch
R29 Original Series & Films
Shop
R29's Most Wanted