Skip navigation!
Story from Celebrity Beauty
Photo: Matt Winkelmeyer/Getty Images.
One year after accepting the Rising Star Award at the Billboard Women in Music Awards, Hayley Kiyoko returned to the same stage last night, but this time it was as the event's host. Just ahead of her North American tour, and with a new song out today, the singer/songwriter/actress remains humbled by the opportunity to not only stand next to Billie Eilish, Taylor Swift, and Brandi Carlile last night, but to call them industry peers.

"I've only hosted a talent show in high school," she told Refinery29 ahead of the event. Although she has plenty of experience performing in front of crowds, Kiyoko is calling this gig her most fearless moment of the year, which makes her first beauty partnership make a ton of sense.
Advertisement
In preparation for the big night, she didn't just rely on her favorite beauty products — like her UNITE Hair 7SECONDS Detangler or trusty eyelash curler — but she took it a step forward by teaming up with Olay Body for its #FearlessMoment campaign.
"I don't take care of my skin as well as I should," Kiyoko says. "In the past, I would have to apply glitter and all these different things to make sure my skin was glowing." But that wasn't the case this time around. She says she saw a difference in her skin once she finally committed to using the brand's Ultra Moisture Body Wash in the days leading up to the event.

But Kiyoko says this campaign means more than just softer skin. "I grew up struggling with what being beautiful meant," she tells us. "Growing up, you just want the opportunity to be accepted. So, being able to be a partner with Olay Body is huge as I'm getting the chance to represent beauty and define what it is." 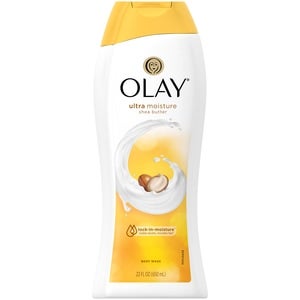 Olay
Ultra Moisture Shea Butter Body Wash
$5.50$8.69
CVS
The "Girl Like Girls" singer gives credit to her fans for opportunities like these. Affectionally referred to as "Lesbian Jesus" by fans, Kiyoko's become an advocate for the LGBTQ+ community and garnered praise around her authentic lyrics. "They celebrate me every day for who I am and my goal is to celebrate them every day as well," she says. "They have really guided me as an artist to really amplify who I am as a person."
Advertisement
In terms of her 2020 goals, self-care is at the top of her priorities list. "I want to work hard on taking care of myself," she shares. "Health and feeling good about yourself is the most important thing."
At Refinery29, we’re here to help you navigate this overwhelming world of stuff. All of our market picks are independently selected and curated by the editorial team. If you buy something we link to on our site, Refinery29 may earn commission.
Related Content:
Beauty
How To Get A Drake Candle With Your Next Postmates Order
This weekend, Drake wants us all to be able to have a nice candlelit dinner at home. The rapper just announced an exclusive partnership with Postmates, rel
by Sarah Midkiff
Celebrity Beauty
Lori Harvey’s New Skin-Care Line Is Michael B. Jordan-Approved
In the latest installment of Vogue’s Beauty Secrets video seies, Lori Harvey took fans through her everyday getting-ready routine and casually dropped th
by Sarah Midkiff
Beauty
Lil Yachty Just Announced His New Nail Paint Line
There’s been no shortage of celebrity beauty lines lately. Pharrell, Jennifer Lopez, and Priyanka Chopra (to name a few) have all tapped the skin and
by aimee simeon
Advertisement
Celebrity Beauty
Katy Perry Is The Latest Star To Try Out Bleached Brows
For last night’s Disney-themed American Idol show, judge Katy Perry came dressed in character as Tinker Bell, which proved to be quite the undertaking to
by Sarah Midkiff
Celebrity Beauty
Billie Eilish Showed Off The Tattoo She Said We’d Never See
In her internet-breaking cover and photo spread in British Vogue, award-winning singer Billie Eilish gave us a glimpse of something she said we would never
by Sarah Midkiff
Beauty
Kim Kardashian Just Bleached Her Eyebrows — & Thinks They’r...
If you need proof of the transformational power of eyebrows, allow Kim Kardashian to provide a visual. You might think that you’d recognize the SKIMS
by Megan Decker
Celebrity Beauty
Olivia Rodrigo Just Spilled All On A Secret New Glossier Product
In the latest Vogue Beauty Secrets video, “Driver’s License” singer Olivia Rodrigo takes us through her everyday makeup routine. The 10-minut
by Sarah Midkiff
Celebrity Beauty
Kourtney Kardashian & Penelope Wear Matching “Leopard Frenc...
Kourtney Kardashian just shared her latest manicure on her Instagram Story, which is par for the course for a member of the Kardashian-Jenner family. What&
by Sarah Midkiff
Beauty
Naomi Osaka Is Making Her Own Sunscreen
For champion tennis player Naomi Osaka, the sun is an occupational hazard. When competing on outdoor courts, the reigning US Open Singles titleholder often
by Megan Decker
Beauty
Sza Shows Off Her Natural Hair & Fans Want The Deets On Her Routine
Like any other physical transformation, the natural hair journey is a deeply personal, revealing, and rewarding one for most people — even your favorite
by aimee simeon
Oscars
Steven Yeun’s Oscars Hair Pays Homage To An Iconic Asian Film
Best Actor nominee Steven Yeun attended last night’s Academy Awards ceremony wearing a classic tuxedo and taking inspiration from a classic Asian film fo
by Sarah Midkiff
Celebrity Beauty
Halle Berry Debuted A Divisive New Haircut On The Red Carpet
Many of Halle Berry’s most memorable red-carpet looks, like her legendary 2002 Oscars moment, are synonymous with her iconic short haircuts. The star
by aimee simeon
Advertisement
Advertisement
Discover
R29 Stories & News
Watch
R29 Original Series & Films
Shop
R29's Most Wanted