Skip navigation!
Story from Celebrity Style
Jennifer Lawrence doesn't strike us as the type of girl who can be bothered with uncomfortable clothes that cling and stick to her body on a steamy day. It can essentially rend a person miserable simply out of discomfort. We wouldn’t put up with it — and we don’t think she would either. Instead, we’re taking cues from how the actress stepped out in NYC today, one of the hottest days we’ve had so far. The trick to her sartorial bliss? Clothes that don’t touch the body. Lawrence’s loose-fit, button-down dress has an A-line shape. There’s nothing body-skimming, nor does it require any special kind of underwear beneath. This thick-strapped, bell-shaped style is light, simple, and will actually allow a girl — and her body — to breathe. But, while Lawrence seems like the kind of non-fussy dresser who could live in a throw-on-and-go summer look like this, the most important parts of the ensemble are the subtle, simple touches that tie it together. A Coach sandal with a leaf-shaped strap is practical but not boring; a layered, long necklace adds shine and polish without really having to add much at all; and a chic, cat-eye frame can make anyone look a little more movie-star-like. It's something to keep in mind, ya know, in case you're not actually Jennifer Lawrence.
Photo: Raymond Hall/Getty Images.
Shop This 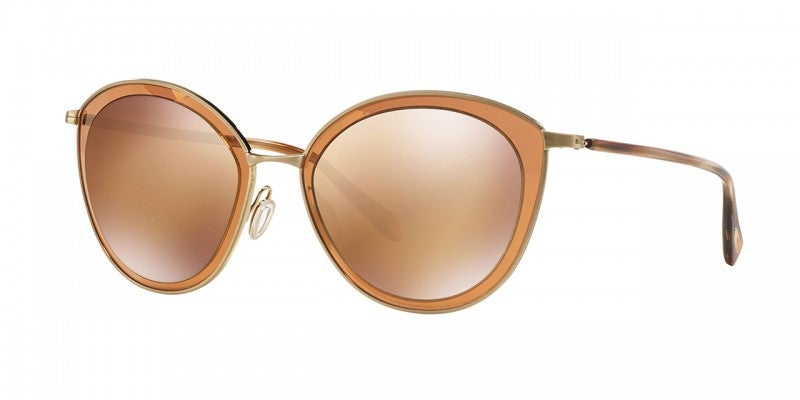 Oliver Peoples
Gwynne
$435.00
Like this post? There's more. Get tons of style secrets, insider shopping dish, fashion news, and more on the Refinery29 Fashion Facebook page!
Advertisement
SAG Awards
Everyone Who’s Anyone Is Walking The Red Carpet At Tonight’s SAG ...
by Eliza Huber
Celebrity Style
For A Select Few, Beyoncé’s Inaugural Ivy Park x Adidas Collab Ha...
Following a slew of leaks and teasers, Beyoncé’s inaugural Ivy Park x Adidas collaboration has been gaining a lot of buzz this week leading up to its of
by Sara Radin
Celebrity Style
Lizzo’s Harnesses Are Sending A Very Specific Message
This week, Lizzo, our blessed queen of not giving a damn, performed at the FOMO Festival in Auckland, New Zealand wearing a turquoise harness on top of a g
by Sara Radin
Celebrity Style
Lizzo Finally Revealed What Was In Her Tiny Bag
It’s been less than two months since Lizzo’s XS Maison Valentino bag took the Internet by storm — getting its own Twitter account to boot — and the
by Eliza Huber
Red-Carpet Spotlight
The Best Looks From The Critics’ Choice Awards, From Zendaya To B...
by Eliza Huber
Celebrity Style
Harry Styles Makes A Case For Pearl Necklaces
Over the course of the last decade, Harry Styles has transformed himself from a boy band heartthrob into an international renaissance man with an eye for f
by Eliza Huber
Meghan Markle
Meghan Markle Reinvents Monochrome With The Chicest All-Brown Out...
The Duchess of Sussex is nothing if not a trendsetter. According to the Meghan Markle Effect, after Meghan is photographed wearing something, interest in t
by Eliza Huber
Golden Globe Awards
We Want Everything The Cast Of Euphoria Wore After The Golden Globes
If you’ve been anxiously awaiting HBO’s drama Euphoria to return, we have some news that might pique your interest. On Sunday, Euphoria castmates Hunte
by Channing Hargrove
Golden Globe Awards
Our Favorite Trend From The Golden Globes Was Sustainability
Nowadays, award shows are about a lot more than celebrities getting dressed up and winning statues. Instead, these influential events are used as opportuni
by Eliza Huber
Beyonce
Beyoncé Was Fashionably Late To The Golden Globes In Custom Schia...
On Sunday, Beyoncé and Jay Z skipped the 77th annual Golden Globes Awards red carpet, arriving inside the Beverly Hilton just after the show began. Becaus
by Channing Hargrove
Golden Globe Awards
Gwyneth Paltrow Wore A Sheer Fendi Dress To The Golden Globes
Last night, on the Golden Globes red carpet, Gwyneth Paltrow told Ryan Seacrest she had “kind-of retired from acting” because she “has this company t
by Channing Hargrove
Dresses
Statement Shoulders & Sleeves Ruled The Red Carpet
by Jenna Igneri
Discover
R29 Stories & News
Watch
R29 Original Series & Films
Shop
R29's Most Wanted