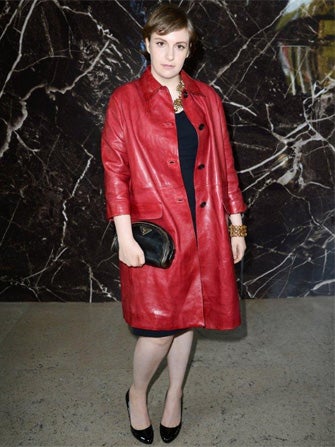 Photo: Courtesy of Miu Miu.
To land a Vogue cover, it seems you have to hit all three points of a certain trifecta: You have to have a compelling (but noncontroversial) story to tell, a face that'll sell issues, and the ability to make Anna smile while you're lounging in a marsh in Provence in a $10,000 ball gown. Additionally, if history is any indication, a personal-trainer-toned body and a private-nutritionist-led juice diet don't hurt either — in recent memory, Adele was the only non-willowy cover star for Vogue in 2012, and then Jennifer Hudson way back in 2007.
According to Radar Online, Anna Wintour's next target doesn't quite fit the Vogue mold, in more ways than one. Lena Dunham deliberately challenges social norms with her show Girls, the clever ways she utilizes press, and the things she says about gender roles, millennials, and body image — topics that fall somewhat left of Vogue's M.O. However, a cover with the new guard is a smart move that Wintour should be pushing for as the magazine strives to woo a younger, lifelong audience. According to Radar, the editor-in-chief is hosting a "top secret, private dinner […] according to a well-placed magazine source." Says the source, "[Anna] is willing to violate a lot of Vogue traditions to do it, including putting her on the cover even though she doesn't really conform to the body type that Vogue has featured for most of its history. This dinner is a first step for Anna to see if Lena will play ball."
This isn't the first time Dunham and Vogue have worked together, the most memorable collaboration being the Met Ball, where Hamish Bowles dressed the actress in a Wintour-appropriate Wes Gordon gown that, while beautiful, felt a bit like a costume Dunham might wear for the magazine's lenses. This time around, we're interested to see if it's Dunham that disrupts the Vogue scene, and not the other way around. (Radar)
Somos Latinx
Dear Miya Ponsetto, You Can Be Latinx & Still Be A Karen
Miya Ponsetto, the white woman dubbed as “SoHo Karen” on social media, was forcibly arrested in California yesterday. Her arrest comes after sh
by Jasely Molina
Food & Drinks
Is A Bagel Really A Bagel If It Isn’t In NYC?
by Elizabeth Buxton
New York
We Dig This NYC Dim Sum
by Camille Coklow
Beauty
The 17 Most Epic NYC Massages
by Kayla Jacobs
Movies
11 Movies Perfect For A Glorious Snow Day
by Vanessa Golembewski
New York
You HAVE To Try The Avocado Toast At These NYC Restaurants
by Elizabeth Buxton
New York
The Absolute Best Spots To Slurp Ramen In NYC
by Zoe Bain
New York
The NYC Rooftops You Need To Hit This Summer
by Elizabeth Buxton
Beauty
The Best Cheap Haircuts In New York City
Choppa style, for cheap.
by Liesa Goins
New York
The Indie Bride-To-Be’s Guide To Dress Shopping In NYC
by Ashley Castanos
New York
Is This Really What The NYPD Thinks About Rape?
NYPD captain Peter Rose has angered rape advocates after saying “acquaintance rape” cases are not as serious as rapes committed by strangers.DN
by Shannon Carlin
US News
Why This New York Subway Mural Of A Gay Couple Is So Important
The New York subway system is making headlines this week, with the opening of its long-awaited Second Avenue line. One of the new stations along that line
by Sabrina Rojas Weiss
Discover
R29 Stories & News
Watch
R29 Original Series & Films
Shop
R29's Most Wanted