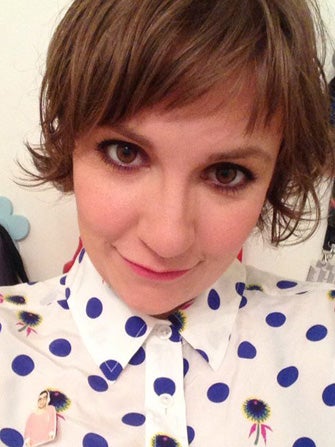 Photo: Via Lena Dunham/Twitter
With all of Miley's antics lately, she's certainly polarizing the crowd. Some people are downright over it, but some still can't get enough. And now, it seems she's got a new fan — in none other than Lena Dunham. The Girls creator bought Cyrus' latest album Bangerz, then took to Twitter to praise it. The result was an adorable Miley/Lena lovefest — they could even become the new Lena Dunham and Claire Danes.
While we know this was but a small gesture from both camps, we can't help but get excited for the possibilities. In an industry where women are often forced to compete with a take-no-prisoners attitude, it's refreshing to see two stars supporting each other in a positive way. We're hoping there's more to come from this talented pair; this could be the beginning of a beautiful friendship. (Perez Hilton)