Skip navigation!
Story from New York
UPDATE: Airbnb has formally responded to Attorney General Eric Schneiderman's subpoena for the personal information of more than 225,000 of its hosts. Airbnb's answer? No way. A site representative blogged that it supports the city's mission to weed out the bad apples of the rental system, "but the subpoena issued by the Attorney General last Friday goes well beyond bad actors and demands information about thousands of regular Airbnb hosts in New York. So, we made it clear to the Attorney General’s office from the very beginning that we would never agree to this type of government-sponsored fishing expedition." We're not sure what Airbnb's game plan is here, but we're totally impressed at their fight-the-man attitude. Read the full statement here.

This story was originally published on October 7:
The legal battle between Airbnb and the City of New York has been seemingly unending, but the latest development is a total game changer, as it now involves every single Airbnb host.
New York Attorney General Eric Schneiderman has issued a subpoena for the rental site to release the data of all its hosts in New York, or about 225,000 users. Though the nature of the data Schneiderman is looking for remains unconfirmed, the amount of personal information a host is required to surrender as an Airbnb host is enough to cause concern. And according to the subpoena, approximately half of the site's listings are currently illegal.

Advertisement
The goal of this most recent legal action is to eradicate landlords who are turning a profit by using Airbnb. For example, some landlords are evicting tenants from their rent-controlled apartments in favor of the more lucrative Airbnb guests — like tourists. We can all agree that's not cool, but to require Airbnb to surrender all personal information for all hosts seems excessive, and unnecessary. Especially given the recent concerns about the government's relationship with our personal data. This is quite a blow to Airbnb, especially after its recent victory with Nigel Warren. Even after the ruling in Warren's favor, the site took the high road and mandated that hosts in NY pay the local hotel occupancy tax of $2 per day.
Though we're still waiting for Airbnb to formally respond to the subpoena, it seems the site is caught in a shade of grey currently uncovered by law. The government's intention — to weed out shady landlords — seems noble, but we can't help but think that, given the complicated nature of the situation, some innocent bystanders may be affected by this action as well. If the true mission here is to weed out landlords who are taking advantage of the system, why not release the personal data of just the landlords in Airbnb's system? As CEO Brian Chesky wrote, "We believe regular people renting out their own homes should be able to do so, and we need a new law that makes this clear.” (Motherboard) 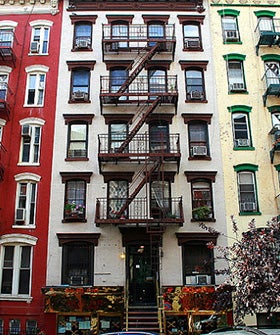 Photo: Via Motherboard.
Food & Drinks
Is A Bagel Really A Bagel If It Isn’t In NYC?
by Elizabeth Buxton
New York
We Dig This NYC Dim Sum
by Camille Coklow
Beauty
The 17 Most Epic NYC Massages
by Kayla Jacobs
Movies
11 Movies Perfect For A Glorious Snow Day
by Vanessa Golembewski
New York
You HAVE To Try The Avocado Toast At These NYC Restaurants
by Elizabeth Buxton
New York
The Absolute Best Spots To Slurp Ramen In NYC
by Zoe Bain
New York
The NYC Rooftops You Need To Hit This Summer
by Elizabeth Buxton
Beauty
The Best Cheap Haircuts In New York City
Choppa style, for cheap.
by Liesa Goins
New York
The Indie Bride-To-Be’s Guide To Dress Shopping In NYC
by Ashley Castanos
New York
Is This Really What The NYPD Thinks About Rape?
NYPD captain Peter Rose has angered rape advocates after saying “acquaintance rape” cases are not as serious as rapes committed by strangers.DN
by Shannon Carlin
US News
Why This New York Subway Mural Of A Gay Couple Is So Important
The New York subway system is making headlines this week, with the opening of its long-awaited Second Avenue line. One of the new stations along that line
by Sabrina Rojas Weiss
New York
7 Last-Minute Places To Eat Out If You’re In NYC On Thanksg...
For some New York City residents, “heading home for the holidays” means taking the 1 train back uptown to a tiny apartment and cooking a festiv
by Elizabeth Buxton
Discover
R29 Stories & News
Watch
R29 Original Series & Films
Shop
R29's Most Wanted