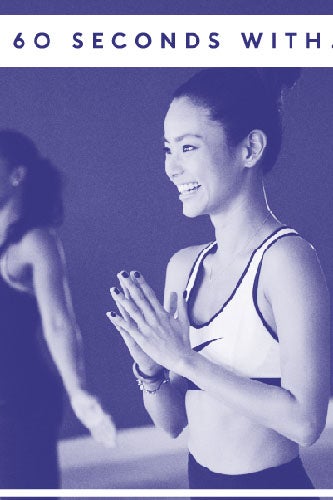 Since her stint on MTV's The Real World, Jamie Chung's showcased some serious chops in the acting department, including roles in The Hangover Part II and Grown Ups. But her latest talent appears to be off the film set — and on the track! That's right, Chung's spent the past few month gearing up for the Nike Women's Marathon. Lucky for us, she managed to find some time between runs to talk Drake, Downton Abbey, and pasta.

Have you liked the process of training so far?
"It's a fun group activity I've realized. You get to train with your friends."

What do you like to listen to when you're running?
"I have a playlist in my iPhone for when I need the motivation. It's basically all rap music. My favorite songs on there are probably Drake's 'I'm So Proud Of You,' and Fabolous' 'You Be Killin Em.'"

Where do you like to shop?
"I just discovered Reformation. That place is awesome! I had no idea. There are also some cool places in downtown L.A. But, I honestly think the best place to find cool, up-and-coming designers is online. I do a lot of online shopping."

What fall TV shows are you excited for?
"My secret TV addiction is Downton Abbey, for sure. The final episode of the last season made me crazy!"

I've heard you're foodie! What food trends are you into right now?
"I've been on this pasta kick recently. I pretty much carbo-load year round."