Skip navigation!
Story from Entertainment News
James Franco was already considered for an Oscar for his performance in 127 Hours, but apparently he thinks his role as Alien in Spring Breakers deserves a nod, too. Though the movie was more over-the-top camp than Oscar-worthy Acting with a capital A, Franco went as far as to release an actual advertisement requesting the Academy's careful consideration.
Actually, to quote directly, he's asking voters to "consider this sh*t." The ad is set to appear in a variety of Hollywood trade publications, in addition to other forthcoming ads to be released as Oscars season approaches. To be fair, a lot of critics agree that his performance was pretty memorable and that Franco should be commended for giving his entire self over to the role. Still, the fact remains that the Oscars tend to gravitate toward certain types of movies, and this just isn't one of them, objective merit aside. And, we have a feeling that this cheeky ad might actually hurt his chances. Perhaps it's just a veiled bid for DVD sales? (NY Daily News) 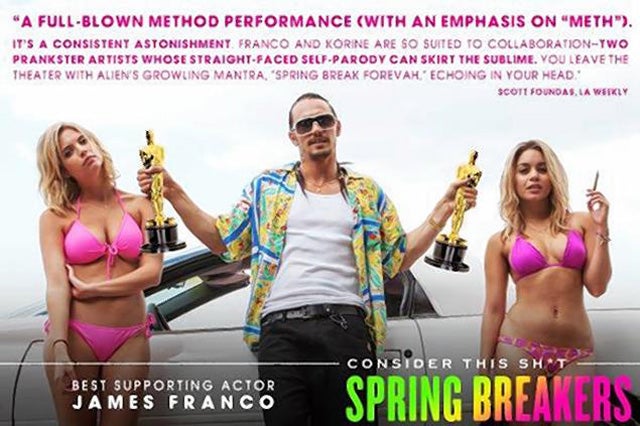