Skip navigation!
Story from New York
Well, it was only a matter of time. Apparently, Citi Bikers are now using the bicycles to get their tipsy selves home at the end of the night. With stations in heavily-frequented nightlife areas, such as the Meatpacking District and Soho, it's no wonder that the thrifty-minded have taken to cycling themselves home, rather than shelling out cash for a cab. The problem? They're operating the bicycles drunk, and no one's really sure what the rules are.
Though the Citi Bike user agreement prohibits riding "under the influence of any alcohol, drugs, medication, or other substance," it's technically not illegal to cycle after a couple of drinks, according city legislation. Plus, there aren't exactly checkpoints set up or any system in place for monitoring the B.A.C of cyclists.
Advertisement

According to the
New York Times
, some users say they're more likely to go out at night and even venture farther than their own neighborhoods using the bike program than they would if they relied on the buses or subway. And though emergency room and city officials haven't seen any significant increases in bike-related accidents since the program began, drunk cycling can certainly take a financial toll: Late fees are as high as $24 an hour, while fees for improperly checking in your bike are in the triple digits. As one user, Jillian, told the NYT, "They're hard enough to use when I'm sober. Forget when I'm drunk." Yet despite serious fines (and some accounts of broken toes), Citi Bike members continue to drink and bike.

Though the program offers an opportunity for great exercise and allows us all to save money, we're curious to see just how many of these bar-crawling bikers hang on once the temperatures drop and the snow starts falling. Perhaps this onset of intoxicated cyclists is a mere seasonal blip. (New York Times) 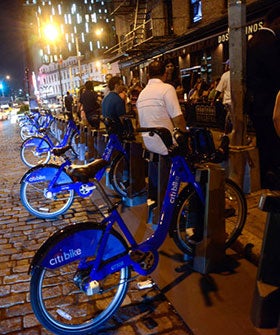 Photo: Via NYT.
Somos Latinx
Dear Miya Ponsetto, You Can Be Latinx & Still Be A Karen
Miya Ponsetto, the white woman dubbed as “SoHo Karen” on social media, was forcibly arrested in California yesterday. Her arrest comes after sh
by Jasely Molina
Food & Drinks
Is A Bagel Really A Bagel If It Isn’t In NYC?
by Elizabeth Buxton
New York
We Dig This NYC Dim Sum
by Camille Coklow
Advertisement
Beauty
The 17 Most Epic NYC Massages
by Kayla Jacobs
Movies
11 Movies Perfect For A Glorious Snow Day
by Vanessa Golembewski
New York
You HAVE To Try The Avocado Toast At These NYC Restaurants
by Elizabeth Buxton
New York
The Absolute Best Spots To Slurp Ramen In NYC
by Zoe Bain
New York
The NYC Rooftops You Need To Hit This Summer
by Elizabeth Buxton
Beauty
The Best Cheap Haircuts In New York City
Choppa style, for cheap.
by Liesa Goins
New York
The Indie Bride-To-Be’s Guide To Dress Shopping In NYC
by Ashley Castanos
New York
Is This Really What The NYPD Thinks About Rape?
NYPD captain Peter Rose has angered rape advocates after saying “acquaintance rape” cases are not as serious as rapes committed by strangers.DN
by Shannon Carlin
US News
Why This New York Subway Mural Of A Gay Couple Is So Important
The New York subway system is making headlines this week, with the opening of its long-awaited Second Avenue line. One of the new stations along that line
by Sabrina Rojas Weiss
Advertisement
Advertisement
Discover
R29 Stories & News
Watch
R29 Original Series & Films
Shop
R29's Most Wanted