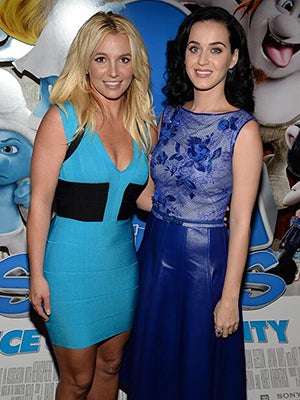 Photo: via Twitter / @BritneySpears
There's something so endearing about two famous people hanging out with each other (cue Jennifer Lawrence meeting Jeff Bridges). Take Britney Spears for example — just because she's the reigning princess of pop doesn't mean she can't go total fangirl when meeting her contemporary. And, that's exactly what she did when she crossed paths with Katy Perry at The Smurfs 2 blue carpet premiere this past Sunday.
Spears (who lent her talents to the soundtrack's lead single) and Perry had a moment in front of the cameras. Perry (understandably) took to Twitter to freak out, and Britney even hinted at a possible Spears x Katy Perry collaboration when the pop star opens her Las Vegas show! This wouldn't be the first time the two have worked together, though. Katy Perry sneakily lent her vocals to Britney's track "Ooh La La", which she recorded for Smurfs 2. "Me and [songwriter] Bonnie McKee secretly did some background vocals on that song," Perry said. "So maybe listen for our voices." Oh, we'll be listening, but nothing will be as sweet to our ears as a full-fledged pop single featuring two of the biggest names in the business. (POPSUGAR)