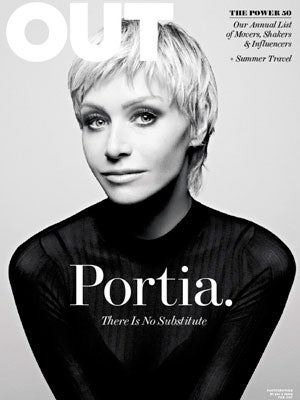 If
Elle Decor
's tour of Portia de Rossi's Santa Monica home (which she shares with her famous half, Ellen DeGeneres) made you swoon, get a load of the actress on the cover of Out magazine. For the black and white feature, de Rossi stepped into a pair of graphic, runway looks courtesy of Louis Vuitton and Prada, and opens up about the film industry's grayer areas — especially, in terms of gay roles.

The veteran actress revealed that she had shopped around a TV show titled Butch and Fay. The premise? Two homosexual actors who marry each other to appear straight for the sake of their careers. And, though she said that everyone who read the script was "titillated" by the idea, the project ultimately shuttered. She went on to explain that TV execs thought that being gay in Hollywood was no longer an issue. Of course, she disagrees, saying "I know it’s not very popular to bring this issue up, but it’s still very difficult for actors to get certain types of roles. We need to hear it some more until things change." Amen.
Advertisement

Click through to see more snaps from the shoot, and read on for de Rossi's two cents on the revival of Lindsay Bluth Fünke. 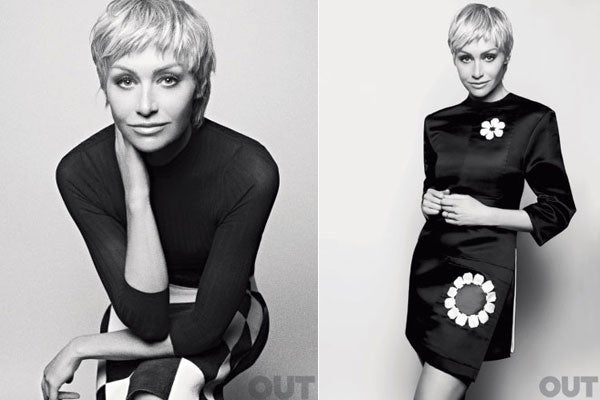 When pressed about her famously celebrated marriage, de Rossi admits that there's no drama to report — all the shenanigans are reserved for the return of Arrested Development! For a quick refresher: At the end of the previous season, the actress' character was dealing with some shocking reality — namely, she's actually three years older than she had thought (as in, The Big 4-0).
On the reincarnation, de Rossi gave Out a small preview of what's to come: "She is attempting to...not become a better person exactly, but to find out who she is and what she wants. She isn’t as vapid and selfish as I’ve always thought her to be." As if we needed another excuse to renew our Netflix membership!
Photos: Via Out
Unbothered
Want To Grow Your Following On Instagram? Micaéla Verrelien Share...
The misconception about being a successful influencer is that you have to tie yourself down to one specific niche in order to gain popularity. But thatR
by Venesa Coger
Fashion
Tinx Is In Her “Rich Mom Athleisure” Fashion Era — But Don’t Expe...
“Rich Moms love a monochrome moment, like a linen pant and a nice linen blouse. They love a bathing suit with a sarong over it and some amazing statement
by Irina Grechko
Unbothered
Olivia Joan Went Viral Highlighting Her Grandmother’s Fabulous Wa...
When it comes to sharing fashion content across multiple social media platforms, clothing hauls are a crowd favorite. Usually, it’s a person talking abou
by Venesa Coger
Advertisement
Unbothered
Rihanna Tells Us Why The IRL Savage X Fenty Experience “Wil...
When news broke that Rihanna had plans to open physical Savage X Fenty stores, many wondered what the shopping experience would be like. Its e-commerce sit
by Venesa Coger
Somos Latinx
In Celebration of Tatyana Ali’s ‘90s Fashion Looks
When The Fresh Prince of Bel-Air hit television screens on September 10, 1990, young viewers weren’t just howling with laughter at the smart humor of the
by Naydeline Mejia
Fashion
Kahlana Barfield Brown On Shopping Secondhand & Why Jeans Go With...
Style and beauty expert Kahlana Barfield Brown is an avid thrifter. If you follow her on Instagram, you know that her styling videos and fashion photos oft
by Venesa Coger
Celebrity Style
You Can Now Shop Carrie Bradshaw’s Fendi Baguette From A...
Update: Fendi has now re-issued Carrie Bradshaw’s famous purple, sequined Baguette bag, following the release of And Just Like That… on HBO Max
by Frances Solá-Sant...
Unbothered
What Black Creators Can Learn From Signed, Blake
S
by Venesa Coger
Style
This Reformation Dress Sold Out After Taylor Swift’s TikTok Debut...
Taylor Swift made her TikTok debut on Monday in a big way. First, she announced that Red (Taylor’s Version), the re-released edition of her 2012 album Re
by Eliza Huber
Style
Zoë Kravitz Wore The Perfect Summer Dress — & Yes, It’s Still Ava...
If you spent the entire weekend thinking about Zoë Kravitz and Channing Tatum’s rumored relationship after the two were spotted sipping iced coffees tog
by Eliza Huber
Beyonce
Beyoncé Channeled Audrey Hepburn In A 128-Carat Diamond Necklace
One of Breakfast at Tiffany’s most memorable scenes features Holly Golightly (Audrey Hepburn) singing Henry Mancini’s “Moon River” while strumming
by Frances Solá-Sant...
Style
Katie Holmes’ Latest Look Includes A J.Lo-Approved Quarantine War...
Like us, Katie Holmes wants to dress like J.Lo. This week, the Dawson’s Creek alum was spotted strolling through downtown Manhattan, wearing a black Cham
by Eliza Huber
Advertisement
Advertisement
Discover
R29 Stories & News
Watch
R29 Original Series & Films
Shop
R29's Most Wanted