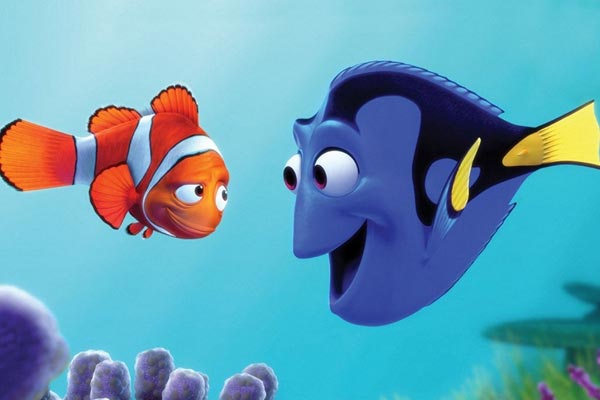 Great news, joy-loving people of the world! Finding Nemo is getting a sequel called Finding Dory, and it's exactly what you think it is, namely, amazing. Ellen Degeneres confirmed she will also be providing the voice for the film, which has been in the works since the original grossed nearly $1 billion internationally. “I’m not mad it took this long. I know the people at Pixar were busy creating ‘Toy Story 16.’ But the time they took was worth it. The script is fantastic. And it has everything I loved about the first one: It’s got a lot of heart, it’s really funny, and the best part is — it’s got a lot more Dory.”
Obviously, Nemo and several other familiar (fish) faces will be making an appearance. This is also Pixar's second-ever film with a female lead (following in the wake of Brave). If the ocean has any glass ceilings, they are cracking. So, fans of warm squishies: just keep swimming! Just keep swimming!

Style
Rihanna’s Latest Look Proves You Can Wear Lingerie Outside
As if to calm our Monday blues, Rihanna stepped out for dinner at Wally’s in Beverly Hills on Monday night wearing yet another top-tier ‘fit, this time
by Eliza Huber
Style
Anya Taylor-Joy Channeled Emma In This Two-Piece Version O...
This weekend, while out celebrating her 25th birthday in New York City, Emma star Anya Taylor-Joy channeled her on-screen persona by donning a puff-sleeved
by Eliza Huber
Style
Kate Middleton’s Jewelry At Prince Philip’s Funeral Honored The Q...
On Saturday, the Royal Family came together at St. George’s Chapel at Windsor Castle for the funeral of the Duke of Edinburgh, Prince Philip, who died on
by Eliza Huber
Advertisement
Style
According To Rihanna, Heeled Flip-Flops Are Making A Comeback
Over the past few weeks, Rihanna has convinced everyone they need a leather blazer, sheer pants, and bangs. Now it’s time to add high-heeled flip-flo
by Shannon Carlin
Style
Dua Lipa’s Latest Look Is An On-Trend Alternative To The Sw...
You want new fashion rules? Dua Lipa’s got ’em. One: thrift a vest. The “New Rules” singer debuted a new outfit on Instagram, makin
by Shannon Carlin
Style
Zoë Kravitz’s Cottagecore Dress Is From Instagram’s F...
And the cottagecore trend continues… On Monday, Zoë Kravitz shared a glimpse of her morning routine with her 6.1 million Instagram followers, which incl
by Eliza Huber
Style
Paloma Elsesser Brought Back Aaliyah’s Dress From The 2000 ...
This weekend, Paloma Elsesser got dressed up to celebrate the wedding of actress and producer Tiffany Lighty and skateboarder Nick Katz. For the outdoor ce
by Eliza Huber
Style
Phoebe Dynevor Traded Bridgerton Pastels For A Puff-Sleeve...
On Sunday, the buzziest names in TV and film gathered — some via Zoom, some in-person — at London’s Royal Albert Hall for the British Academy of
by Eliza Huber
Style
How Lady Gaga’s House Of Gucci Wedding Dress Compares To T...
Just when we thought the fashion in Ridley Scott’s upcoming film House of Gucci couldn’t get any better — think: Adam Driver as Gucci heir, Maurizio
by Eliza Huber
Style
Ashley Graham’s Outfit Makes A Case For Wearing Bike Shorts With ...
On Wednesday, Ashley Graham took a break from what appeared to be a fitting to snap a few mirror selfies and show off her look. For the occasion, the model
by Eliza Huber
Style
Sophie Turner’s Latest Look Is On-Trend & Vacation-Ready
On Tuesday, Sophie Turner spent her afternoon basking in the sun, listening to Taylor Swift’s “Mr. Perfectly Fine” (to husband Joe Jonas’ dismay, w
by Eliza Huber
Style
Rihanna’s Going-Out Look Included A Leather Blazer & Sheer ...
Rihanna is on a street style roll. Over the last month, the singer-designer has been debuting impeccable look after impeccable look. What makes them superi
by Eliza Huber
Advertisement
Advertisement
Discover
R29 Stories & News
Watch
R29 Original Series & Films
Shop
R29's Most Wanted