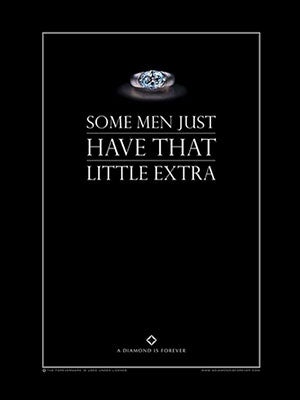 This article on
Business Insider
may open with a quote from Michael Scott, but it goes on to pose a very interesting question: What is the big deal about diamond engagement rings? They feel solidly embedded in age-old tradition to many of us, but is that really true? As it turns out, no. Apparently, the entire "tradition" started with a De Beers ad campaign in...1938. (So, it's older than the columns on Cher Horowitz's house, but not by a lot.) Before then, diamond rings weren't at all commonplace on the fingers of American spouses-to-be.

Advertisement
By now, most of us are aware that the supposed rarity of diamonds is artificially created by a cartel controlling all supply to falsely inflate demand. But, it's not just the market that's under the strict grip of De Beers — it's your emotional response and attachment to something much greater. Good advertising is, at its most effective, designed to make you need something you didn't even know you wanted, and the diamond powerhouse has done a particularly incredible job with this.
Until the mid-20th century, diamond rings were actually an outgoing trend, and in the face of wartime economies, the picture was only getting bleaker. Madison Avenue ad agencies came to the rescue when they decided to re-brand diamonds as a status symbol, essentially manufacturing the idea that the size of the stone corresponds to the strength of a man's love (which might explain why some couples keep investing in diamond rings for various anniversaries and occasions, well after the initial engagement, into old age). De Beers, with the help of some industrious Mad Men types, created a tradition and a social convention in one fell swoop. Using marketing techniques ranging from British royal support to guides on how much to spend, they kept the cash rolling in, and suddenly, an outgoing trend transformed into tradition. And today, the idea is so ingrained in our understanding of love and marriage today that many couples can't fathom the idea of commitment without some serious bling.
The history of how diamond rings came to be the, erm, gold standard for young lovers with a savings account reads like one of the greatest advertising plays of all time. And then, of course, there's the issue of conflict diamonds, still far more common than any of us would like to believe, Kimberly Process or no. Business Insider points out that the value of a diamond is basically nothing more than its function as a status symbol, and honestly, is that really worth the chain of awfulness that's triggered by our demand for them? You tell us: Is this exposé (not the first time it's been written, but certainly a worthwhile ready, anyway) enough to convince you?

Most Wanted
25 Trench Coats That Prove There Are Many Ways To Rock The Trend
by Alejandra Salazar
Shopping
A Clog-Shopping Guide: The Good, The Rad & The Fugly
by Emily Ruane
Dedicated Feature
Is TikTok The Future Of Thrift Shopping?
R29 is proud to partner with Cricut, to explore the ways independent entrepreneurs are transforming modes of creativity into thriving small businesses. Bac
by Eliza Dumais
Advertisement
Fashion
Why Viral TikTok Trends Rarely Come In Plus-Sizes
When you think of viral fashion trends on TikTok, what comes to mind? Obviously there’s With Jéan’s Alexa dress, a ruched terry cloth frock that’s s
by Eliza Huber
Style
The Enduring Allure of Anne Boleyn’s Necklace
Last month, supermodel Bella Hadid wore an initial necklace with an oversized “B” charm from which three teardrop pearls dangled, which compelled a fle
by Frances Solá-Sant...
Style
16 Short & Sweet Micro Mini Skirts
by Eliza Huber
Style
May The Slits Be High & The Hemlines Be Short: The Return Of The ...
The only wardrobe item tinier than our party dresses, short shorts, and cardigans in 2021 are our skirts, which, over the course of the pandemic, have dwin
by Eliza Huber
Style
We Found A Wearable Alternative To This Season’s Most Risqué Goin...
When celebrities first started wearing pin tops earlier this summer, we were skeptical. How is a top held together by a barely-there slice of metal suppose
by Eliza Huber
Designers
Spring’s Top Runway Trends Look To The Past For The Future
by Eliza Huber
Style
Are Triple Bags The New Double Bags?
If you’re the type who finds themself carrying both a bag the size of a pack of gum for the sake of fashion and a grubby tote for everything you actually
by Eliza Huber
Style
Low-Rise Haters, Meet The V-Pant: Your Worst Nightmare That’s Tre...
Few items of clothing have been talked about over the last two decades with more disdain than the low-rise jean. Once a staple in the world of early-aughts
by Eliza Huber
Fall Trends
29 Big (Fashion) Ideas
After a year of digital fashion shows, this month’s New York Fashion Week marks the official return to in-person designer showcases. But if the past 18 m
by Irina Grechko
Advertisement
Advertisement
Discover
R29 Stories & News
Watch
R29 Original Series & Films
Shop
R29's Most Wanted