Skip navigation!
Story from New York
Okay, look. Some of us have dated a lot. Like, a lot. And, in the long run, we've ended up the better for it. But, unlike some of our married-at-25 peers and friends, that means we have a lot of stories of failed relationships and near-misses that make for terrific cocktail-party conversation (and also, occasionally sad memories). So, this story over at The Atlantic (exploring why we give the men we date nicknames like "Hot Gym Guy") really resonates.
Because, well, we really do all nickname the people we date. Reading this story immediately prompted an email chain among this writer's friends, recalling memories of "Cardigan," "Manchild," "Bagel," "That Dewey Guy," "Common Law," "Golf Cart," "Neighbor," and so many more. And most of the memories were funny, even if the relationships had been painful. Which neatly illustrates the point The Atlantic makes, that we give the men we date (or hook up with) nicknames so they don't feel as real if they end up being a disappointment. In fact, looking back and remembering the likes of "Manchild" actually made us feel pretty warm and fuzzy with nostalgia, over all of these (mostly) disastrous attempts at love. Pretty great, right?
Advertisement 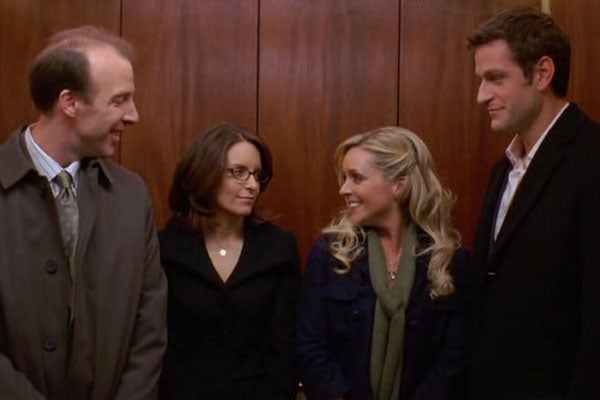 See? Even Liz Lemon does it. These guys were called The Head and The Hair, in case you forgot.
But. And there is definitely a but, here. This follow-up to the story came out yesterday. And it made us think. The writer makes the case that it's harmless when women engage in nicknames, but less so when men do it. And then she winds down a bummer of a path illustrating some gross, objectifying behavior involving names like "Hooker" and "The Super Soaker." Not great. Even less great: The comments the writer finds on a whole bunch of "bro" sites, where conversations about nicknames devolve into something much more demeaning.
And yet, it's the Internet. Are these examples from a corner of anonymity where young men just tend to be their jerkiest selves? Because really, this is more name-calling than nicknaming. But, the writer makes the point that "Somehow, nicknames derived from appearances, behaviors, sexual habits, and personal characteristics seem more offensive when they're invented by men to talk about women," and goes on to question, "Is it sexism? A double standard?"
She doesn't land on a clear and easy solution, because there isn't one, and to be totally honest, it does feel like a double standard to us, but we don't necessarily feel like that's wrong. That idea feels hard to wrap our heads around, but it's something we can intuit pretty easily. And here's why: 1) Sometimes, you want to talk about someone, but you need some level of anonymity...you know, just in case his friends are around and happen to overhear. Or you're just a little bit paranoid. 2) This writer doesn't know a single woman who would use a man's nickname in front of him, or in his general vicinity, just assuming he wouldn't know she was speaking about him. 3) Isn't it sometimes okay to harmlessly make a person less...personal, if it makes a difficult situation less painful? And if so, does that take us down the slippery slope of objectification being circumstantially harmless (or near-harmless), if it doesn't come from an ugly place? Since, at the end of the day, calling someone "Tom, who had a lot of promise but wasn't that interested in me" or "Mia, the girl who disappeared for no reason" is trickier than using a personal-space-creating nickname.
Advertisement
Because, with all of that said, our most important point is this: Ultimately, it's all about intentions. If you aren't trying to objectify another person, it's less offensive (not offensive at all, even?). And we've got to believe that there are men and women out there, who don't aim to objectify. Because if that's not the case, then we're all screwed, anyway.
So, give us your thoughts. Nicknames: Harmless fun or a unilaterally demeaning way to objectify another person, no matter your gender?