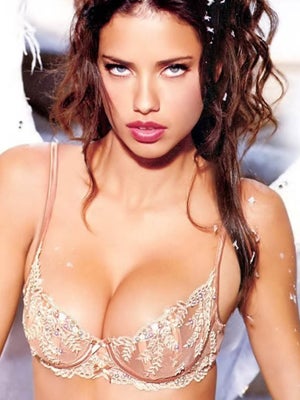 Placing a skinny, socially-acceptable beauty in an advertisement is something companies have been doing for a long time. The idea is that a thin, "idealized" model will sell more that a quote-unquote real woman. A recent study done by Warwick Business School about how women react to skinny models as an example of aspirational living may actually backfire, leaving women feeling ostracized from the product the model is intending to sell. Says researcher Dr. Tamara Ansons in The Daily Mail, "This is because a pretty model triggers a coping mechanism in women — scorn — which helps them feel better about their own looks."
Advertisement
So, a skinny, idealized, heavily airbrushed model may incite scorn by onlookers, especially when presented in an obvious and blatant way, like a Victoria's Secret model. According to the Warwick study, the obvious pandering creates a defensive mechanism in the viewer. Yet, not all is bad for models and advertisers: Obvious pandering may not work, but more subtle placement, where a celebrity or idealized model is placed in a more atmospheric setting, has the exact effect that advertisers are aiming to achieve. As Ansons writes, "We found that a woman’s self-perception and consequent effects on product evaluation depend on the degree of attention paid to the idealised image of a woman in advertisements." Basically, if the super-elite model is secondary to the scene, the advertisement pays off.
The bottom line is that idealized models, when presented just as bodies or faces, happen to ostracize the viewer. Yet, when they are depicted as being a part of a lifestyle choice, or if they are, as the study puts it, "subtly exposed," the attractive person or celebrity is more subdued and, hence, imitable. The study suggests that we only like physical "perfection" when it isn't in our faces.

Fashion
Meet The Boob Tape That Survived My Under-Boob Sweat
What is a hot girl summer but an amalgamation of under-boob sweat, complicated crop tops, and impractical backless dresses? These anti-bra silhouettes are
by Alexandra Polk
Most Wanted
Anthropologie’s Memorial Day Weekend Is Here & It’s A...
by Chichi Offor
Most Wanted
17 Gravel-Grinding Wedding Guest Shoes Perfect For Dancing On Une...
Summer wedding season has always tangoed with the high potential for an alfresco setup. Beachside and patio nuptials relegated to the Sun Belt and more tro
by Marissa Rosenblum
Advertisement
Deals
The Best Memorial Day Sales You Definitely Don’t Want To Miss
The holiday weekend is finally here quite yet — which means a bundle of the best Memorial Day sales are available to shop around the internet. If you’r
by Alexandra Polk
Dresses
You Say Nap Dress, We Say Snack Dress — Let’s Call The Whole Thin...
by Avery Felman
Designer Collaborations
The Second Yeezy Gap by Balenciaga Collection Drop Is Here
Update: The second drop of the Yeezy Gap Engineered by Balenciaga collection is now available to shop here. This story was originally published on January
by Frances Solá-Sant...
DIY
Fashion Upcycling Is More Popular Than Ever — 6 Tools To Get You ...
As fashion fans grapple with the environmental impact of the clothing industry, they are looking for alternative ways to shop. Chief among them is secondha
by Frances Solá-Sant...
Unbothered
Black People Have Always Been Sustainable — Here’s How
Welcome to Fashionably Black!, a style and culture guide for Black people highlighting the cultural moments, pioneers, and conversations we’ve always bee
by Venesa Coger
Style
Corsets Are Summer’s Biggest Trend. Here’s How R29 Ed...
It’s official: corsets are everywhere right now. From Bridgerton‘s Regency-era style lighting up our screens (and influencing our wardrobe
by Ebony-Renee Baker
Memorial Day
Fully Brace Yourself For Memorial Day’s Clothing Sales — Th...
by Emily Ruane
Talking Shop
The Classic-Quirky Handbag Brand Made For Day-To-Night Wear
In Refinery29’s Talking Shop series, we’re chatting with owners of up-and-coming small businesses about their experiences launching, the big ch
by Jinnie Lee
Deals
Celebrate Memorial Day Weekend With J. Crew’s Extra 50% Off...
by Mercedes Viera
Advertisement
Advertisement
Discover
R29 Stories & News
Watch
R29 Original Series & Films
Shop
R29's Most Wanted