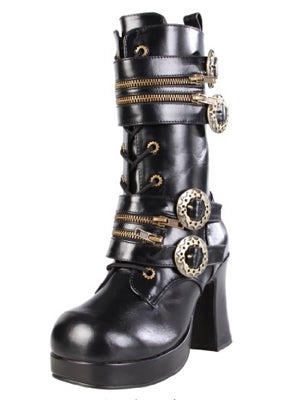 We're not saying that there is absolutely, positively no chance that steampunk will be the future of fashion. Anything's possible. Maybe NYFW will be cancelled due to an outbreak of zombies. Maybe Prada will do a collaboration line with Walmart. You never know.
Steampunk — that high-tech-revisionist take on Victorian aesthetics — has been active and highly visible for the better part of a decade, and has already woven its way in and out of fashion. Surely, elements of it will crest on the runways now and again. But fashion is too big and steampunk too clunky and specific for it to become a dominant style genre. Steampunk is a definitive subculture with a set of aesthetic norms that flourish only within that subculture. Even steampunk enthusiasts know that. Duh.
Advertisement
All this, however, did not stop IBM from releasing findings that, according to its high-tech proprietary future-casting algorithm, steampunk, "will be a major trend to bubble up, and take hold of the retail industry." It continues, "Major fashion labels, accessories providers, and jewelry makers are expected to integrate a steampunk aesthetic into their designs in the coming year." Granted, its algorithm had some good reasons to determine that. "Chatter" or discussion about steampunk is growing rapidly among the under-30 demographic — as it has been for years. But, as most fashion followers know, simple analytics cannot accurately predict the changing tastes and interests of groups of individuals based on mentions alone. If that were the case, we'd all be dressing like Psy.
Honestly, we sort of feel bad for IBM, which obviously has all the tools to accurately predict what the fashionable will be wearing in two years, but not the situational awareness to apply them properly. It's like your grandma trying to be hip and buying you a tube top post-1995. We appreicate the effort, guys, but you're doing it wrong.
That said, who knows? Maybe two years from now we'll be doing copper-plated top hat roundups for you. If that happens, IBM, we owe you a goblet of the finest port. (Forbes)

Style
Parachute Pants Are Back — & They’re Coming For Your Sweatpants
After a year of sweatpants, we’re now seeking out alternate ways to wear elastic pants when our surroundings aren’t the four walls of our homes. As we
by Eliza Huber
Style
7 Spring Fashion Trends That Are Bringing Joy Back To Dressing
With vaccine rollouts bringing about a more optimistic horizon, we're seeing these spring collections with a newfound sense of excitement.
by Eliza Huber
Style
Do You Have A Crush, Or Is It The Short Shorts?
On Tuesday, Milo Ventimiglia — or as I prefer to remember him, Gilmore Girls’ Jess (aka my first crush) — was photographed post-gym wearing what can
by Eliza Huber
Advertisement
Style
So You’re Thinking About Trying An Upside-Down Bikini…
When several members of the Kardashian-Jenner clan — starting with Kendall, and then followed by Kylie and Kourtney — began wearing their string bikini
by Eliza Huber
Fashion
Mermaidcore Is Trending. But… What… Is… It?
In March, fashion shopping platform Lyst reported that they had evidence of a rising fashion trend, strongly reflected in what their users were searching f
by Eliza Huber
Style
The Unexplainable Allure Of Shoes That Make Your Feet Look Big
In February, among Fashion Month’s many monochrome matching sets and hygge puffer coats, were shoes of epic proportions. Tokyo-based streetwear brand Amb
by Eliza Huber
Style
Ballet Flats Got A New Look This Season
by Eliza Huber
Style
Does Wearing Your Water Bottle Make You Drink More? An Investigation
A lot of the “things you should try” videos that I find on TikTok don’t live up to the hype for me: Feta pasta doesn’t actually taste that
by Eliza Huber
Style
These Fashion Month Trends Are The Perfect Mix Of Comfort & High ...
by Eliza Huber
Style
Like It Or Not, Yoga Pants Are Making A Comeback
A decade ago, I wouldn’t have been caught dead in a pair of skin-tight bike shorts. Yoga pants, though, now that was a silhouette I could rally behind. F
by Eliza Huber
Style
Lenny Kravitz Had The Right Idea About Scarves
In 2012, on a day that will spawn thousands of memes, Lenny Kravitz bundled up for a grocery run, choosing a scarf as his primary mode of protection from t
by Eliza Huber
Most Wanted
14 Transitional Trench Coats For Any Kind Of Weather
by Alejandra Salazar
Advertisement
Advertisement
Discover
R29 Stories & News
Watch
R29 Original Series & Films
Shop
R29's Most Wanted